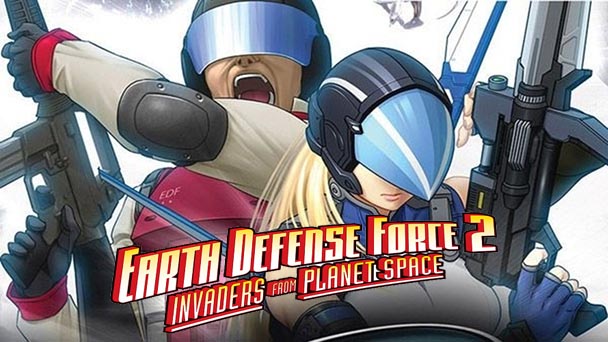 It may come as a surprise to some, but the Earth Defense Force series didn’t actually start with the Xbox 360 cult-classic, Earth Defense Force 2017. In truth, 2017 was the third main-line EDF game from developer, Sandlot. Earlier titles were released as a part of D3 Publisher’s Simple 2000 series of Japanese budget titles. None of the previous games have seen the light of day in North America. That is, until now. For the first time in the U.S., Earth Defense Force 2 (also known as Global Defense Force in Europe) makes landfall, arriving on the PlayStation Vita with an armada of giant bugs, dozens of missions, and more B-movie charm than you can shake a forty-meter-tall kaiju‘s tail at. Does humanity have any hope against the Invaders From Planet Space?

The year is 2019. It has been two years since the alien onslaught of 2017 devastated most of the Earth’s cities. Just when peace had finally set in, UFOs start appearing all over the world, dropping gigantic versions of household pests, each with an appetite for human flesh. Ants the size of double-decker buses (hilariously referred to as “Buggernauts”) roam the streets of London and Tokyo. The last line of defense against these alien invaders? The Earth Defense Force. As you can clearly tell, this isn’t Shakespeare. Nor does it need to be. The plot, as paper-thin as it is, sets EDF2‘s Japanese sci-fi B-movie tone perfectly, thanks in no small part to delightfully-cheesy English voice acting. You almost expect to hear the Mystery Science Theater 3000 crew doing a running commentary while you play. 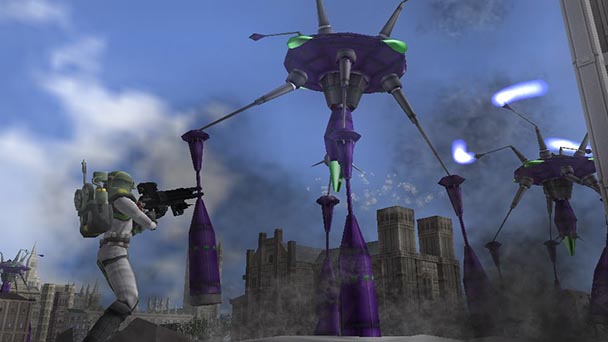 As the Simple 2000 origin suggests, EDF2 is not an overly-complicated third-person shooter. New players will be able to gain a firm grasp of the basics within minutes of starting. Where the depth begins to show is in the class system. There are three playable soldier classes; Infantry, Pale Wing, and EDF 2025’s Air Raider. The well-rounded Infantry is the standard EDF trooper, sporting a variety of weapons perfectly-suited for both inexperienced soldiers and veterans alike. The Pale Wing, on the other hand, belongs to the battle-hardened. This female-only soldier class features a jetpack fueled by an automatically-recharging power generator. The generator also supplies power to Pale Wing’s weapons when reloading, meaning that if you overheat it, you could be stuck with no means of escape and no way to defend yourself from the Buggernauts for several vital seconds. Lastly, the Air Raider offers little in the way of traditional offense. With unmanned turrets and air strikes being the heavy focus for the class, it is best left for those who know exactly how to keep their distance.

The meat-and-potatoes of Invaders From Planet Space comes from the main campaign’s seventy-eight missions and six difficulties, all of which support online co-op. Missions play out by being dropped into an area of the world filled with bugs, robots, UFOs, or whatever the Invaders throw at you, with the orders of eliminating everything that moves. It sounds easy, but on the tougher difficulties, this is no small feat. With each increase in difficulty, enemies give more damage, take more damage, and even fire more lasers or acid at a time. To counteract this are loot drops. As you defeat enemies, they will randomly drop health pick-ups, armor, or new weapons. Gathering armor increases your soldier’s starting health, allowing you to tackle the harder difficulty missions where better items drop. There are hundreds of weapons spanning the three character classes to collect. Needless to say, the replay value is absolutely staggering. 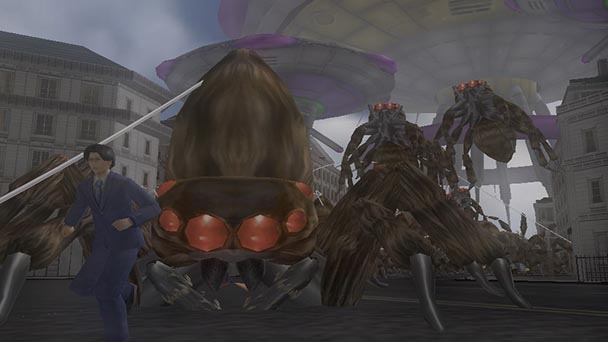 Like the previous PlayStation Vita port in the series; 2017 Portable, taking the fight online is fast and easy. Up to four people online or through local ad-hoc can tackle the missions of campaign mode together or duke it out in a versus mode. For the sake of keeping the game balanced, a limit determined by the difficulty is applied to the armor (health) number and weapon levels of all players. Communication during gameplay is handled through predetermined responses selected via the D-pad or in a chat window in the lobby. During my time online, the game remained playable and enjoyable, with the only hiccups being an enemy occasionally warping to a different location due to lag.

Earth Defense Force 2 is bound to be off-putting for graphics fiends. Characters and enemies are merely passable for a portable title that has as much going on on-screen as this one does. However, environmental geometry and textures are extremely dated, even by Vita standards. To long-time fans of the series, though, this won’t be an issue. What might not gel well with either new or old players are the visual effects applied during gameplay. There is a constant glow on the screen. In daytime levels, it isn’t very noticeable, but in after-dark missions where enemies are already hard to see, the glow from the windows of buildings becomes a source of irritation. A blur effect has also been added to objects and enemies in the distance. Unfortunately, the way this is implemented makes it feel like your eyes aren’t focusing correctly, rather than something being far away. Giving the option to disable these effects would have been preferable. 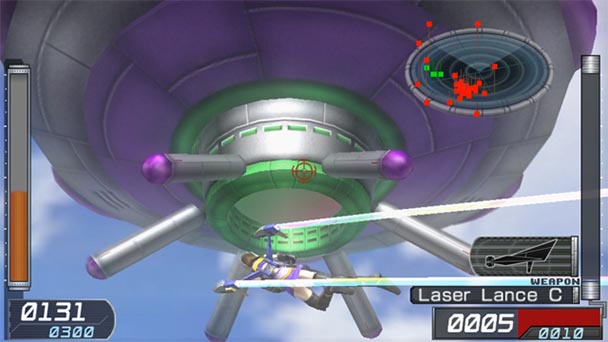 Ultimately, EDF2 succeeds at being an entertaining sci-fi time sink. The easy-to-learn, tough-to-master gameplay makes it perfect for a quick round of bug squashing while on lunch break or for those extended late-night sessions while playing online. If you can deal with the presentation issues, you will be rewarded with a satisfying, edge-of-your-seat shooter with an astronomical amount of replay value. And, because I couldn’t let it go without a mention, “Invaders From Planet Space” might be the best video game subtitle of the last decade.

Earth Defense Force 2: Invaders From Planet Space was played on the PS Vita with review code provided by the publisher.

Summary : Shooter fans willing to forgive some presentation issues will be treated to an enjoyable campaign packed with a wealth of content and replay value. EDF veterans looking for more on-the-go bug-blasting from Sandlot should scoop this one up immediately.