Robert’s Overview: A decade ago, the release of a new Tom Clancy-branded game was a celebratory event. Titles such as the 2000’s Rainbow Six and 2002’s Ghost Recon: Island Thunder offered some of the tensest experiences found on consoles.  Unlike the unsophisticated, thrill ride-like first-person shooters of today, these games demanded strategic competency. Decisions from the type of loadout to breach tactics delivered wildly different ramifications which complemented (or even undermined) different play styles- making each mission sufficiently edgy.  Notably, these games were unlike today’s FPSs, offering little of the buttresses such as health regeneration or bullet absorbing protagonists. On the higher difficulty levels, a single headshot could end the game, ratcheting up the tension to controller-clenching intensity.

Over time, Ubisoft seemed to grow envious of the attention and revenue earned by other prominent military shooters; Rainbow Six and Ghost Recon evolved into graphically opulent shooting galleries that needed only a modicum of planning, trading tension for bombastic Hollywood spectacle. Fortunately, Christian Allen, the former creative director for the Ghost Recon series, has a desire to reinvigorate the tactical shooter with the upcoming release of Takedown: Red Sabre. A brief play though of a pre-alpha build demonstrated that the development team at Serellan has their crosshair locked on a visceral experience. 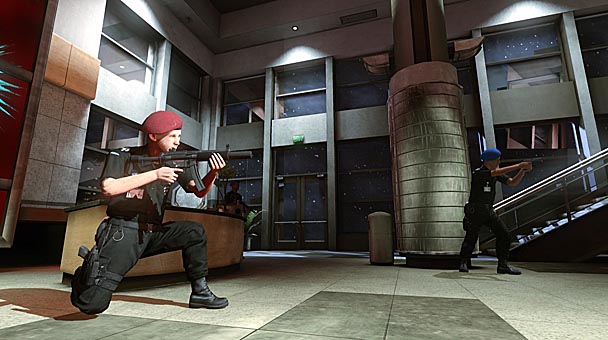 I’m usually a stickler for authenticity, and puzzled when games go to great lengths to model the look and sound of weaponry, but then falter in other key areas. Even at an early stage, Takedown evades many of the pratfalls which plague final builds. Enemies exhibit intelligence, avoiding the predictable pathways and behavior which can ruin the tension of engaging multiple hostiles simultaneously. Nicely, tangos demonstrate credible accuracy, obliging players to slice the pie with attentive precision. Smaller details such as operatives carrying twenty-eight rounds in a thirty round capacity M4 magazine reveal Serellan’s aspirations for accuracy. With options for single, cooperative, or competitive six-on-six play, Takedown: Red Sabre is coming along quite nicely. Undoubtedly, I’ll be following this game very closely as it advances toward a fall release on PC and subsequent console launch.

After the apprehension of Takedown, a trip to the Namco-Bandai booth managed to quell my nerves. Here, the publisher was focusing on the evolutionary rather than the revolutionary. While that might seem like a snub, it’s not- many of the titles demoed at their booth were quite enjoyable. 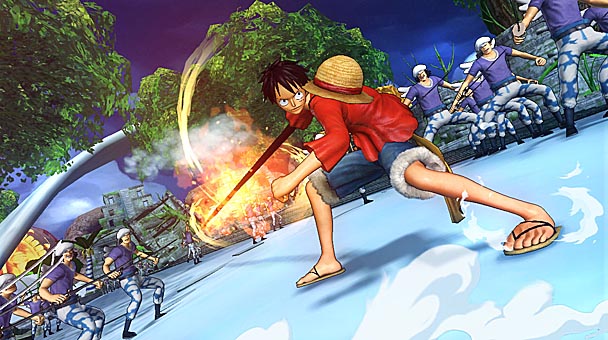 Having an affinity for anime and Musou titles, I was immediately drawn to One Piece: Pirate Warriors 2, a game which effectively fused Omega Force’s traditional mechanics with Monkey D. Luffy’s elasticized abilities. Tapping out crowd -purging combos was intuitive, and the game’s visuals managed a fluid framerate even during the craziest confrontations.  Nicely, I was told an obligation to the manga or anime wasn’t a prerequisite for enjoyment, with the game crafting a new plotline as players unlock new characters.

With the line for Dark Souls II filled with solemn faces, I hoped a few missions with FROM Software other principal series would produce a smile on my visage. A slight grin materialized when I took the kitschy pink machine piloted by the previous Armored Core: Verdict Day pilot, and converted it into a gunmetal-hued ranged-combat killing machine. As with previous series iterations, much of Armored Core’s strength lay in its options, which hundreds of components, liveries and decals for player to fiddle with. After assessing my new Core design in the test lab, I took the machine to the battlefield, finding solid gameplay which didn’t veer wildly from past iterations. That said, my Core was responsive and proved to be sufficiently formidable, as I downed a few enemy Cores in both solitary and cooperative missions. Xbox 360 and PlayStation 3 owners can expect the title to jump-jet onto store shelves on September 27, 2013. 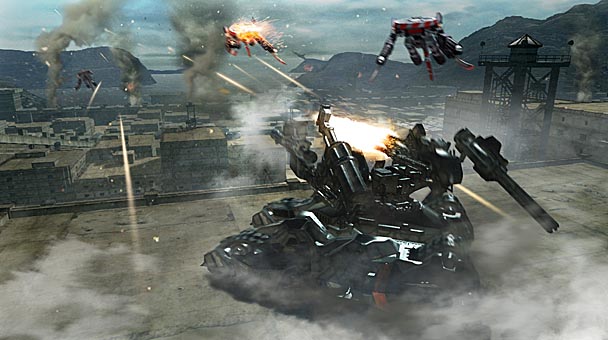