Sean’s Overview: One thing that we always need to keep in mind at E3 is that the demos that we’re watching are not finished products, and the teams aren’t always the best at putting their best foot forward when building an E3 demo. That had never been more evident than today. Robert and I passed on Bethesda and made an appointment with Warner Brothers to see Batman: Arkham Origins and the first-person-zombie-free-runner, Dying Light. We sat through a demo for Arkham Origins before being let loose to give the demo a try for ourselves. It’s definitely a Batman game. The demo didn’t really add much to the Arkham City formula, apart from a tedious crime-scene-recreation gimmick in which you searched for in order to unlock different views of the same animation over and over until Batman says you’re done. Hopefully, the finished product will allow players to use their own deductive reasoning to skip steps if they are more perceptive than Mr. Wayne, otherwise I imagine I’ll be skipping a lot of sidequests.

There was also a portable Arkham side-story for both Vita and 3DS which plays as a sidescrolling brawler with familiar controls and mechanics from the 3 previous Arkham games. On paper, it sounds terrible, but it was actually pretty fun. The story and voice-acting were goofy, particularly for Catwoman, but the classic Arkham fighting style holds up well on a single plane. I’m almost looking more forward to the Vita release than the PS3. 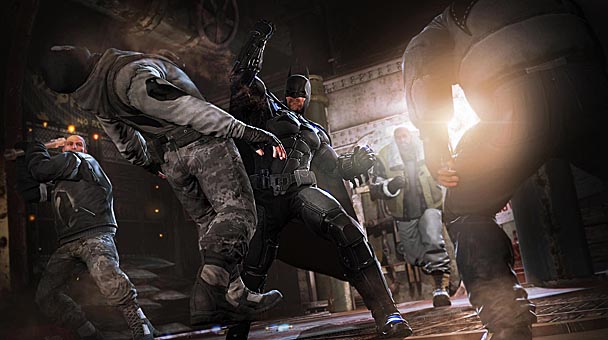 Dying Light was a first-person zombie survival game with free-running elements and a weapon customization system. You’ll probably see that sentence cut-and-pasted a lot, because it describes 90% of games at E3. Dying Light also features lens flare. No word yet on other buzzwords like “social” or “epic story” but I’m sure those are in there somewhere.

After Warner Bros., we met with City Interactive to see Lords of the Fallen. Lords is definitely my kind of game. It focuses on tactical real-time combat, similar to Monster Hunter or Demon Souls, but the story takes more of a central role than it does in either of those games. You will also be able to customize your character on the fly as stats and class-type are tied mostly to armor and weaponry. So far, Lords of the Fallen is a frontrunner for my game-of-show, and I’m not just saying that because they game me hot dogs. 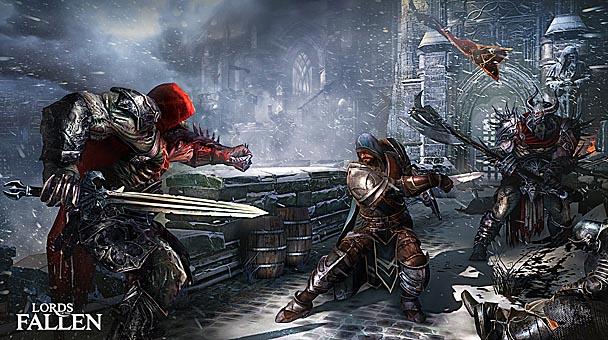 After lunch, we hit Square-Enix’s booth, and only managed to see a handful of games in the 3 hours that we spent in their booth. While Sage and Robert tangled with Thief developers, I checked out Final Fantasy XIV’s reboot, A Realm Reborn. I didn’t spend much time with the initial release, so I can’t say for sure what has changed, but I can say that what I played was competent, if not terribly exciting. I guess part of the problem with Final Fantasy being so inspirational is that they can’t really stand out against all the other fantasy games that have aped and lapsed their visual style. I also had hands-on time with the HD remakes of Kingdom Hearts and Final Fantasy X. Those games are still fun, and I think they’ll hold up well, as long as people keep their expectations low for the visuals, as PS2 visuals appear sterile when compared to games of today.

I ended my day at Namco where I only got to play Pac-Man and the Ghostly Adventures. The new Pac-Man game is a character platformer that ended up being more fun than it had any real right to be. I hated it the moment I touched the controller, as the movement felt sluggish compared to other platformers that I have played in the past few days, but within minutes, I was used to the pace and was charmed into finishing the demo. The orchestrated music is fantastic, and some of the best I’ve heard at the show. I worry that this will get overlooked as some of the mechanics, such as Pac-Man’s suits giving him powers, are a little done-to-death (but what isn’t in the character platform genre) but this game is endearing enough to deserve a second look. 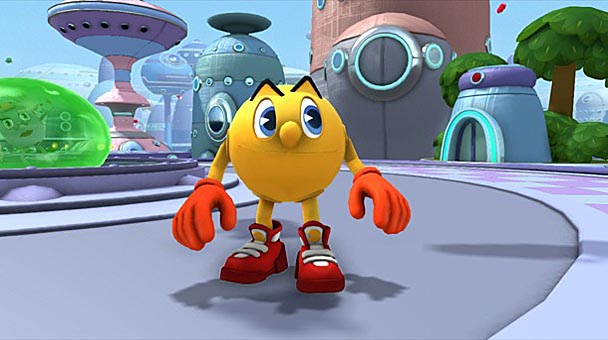 I’ll keep you guys posted on how the final day turns out.