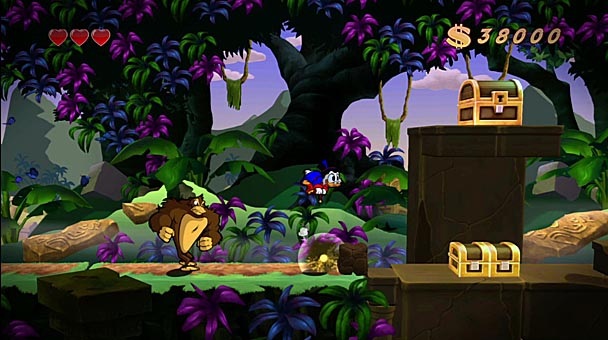 What is the concept? When the original DuckTales was released for the Nintendo Entertainment System in 1989, the title went on to become Capcom’s biggest hit for the console, selling over 1.6 million copies across the North American, European, and Japanese markets. Although most licensed games during the era were of dubious quality, DuckTales confounded convention, established a watermark for the tie-in title. Bolstered by charming aesthetics (especially the five-channel rendition of the cartoon’s theme song), an innovative jump mechanic, and a nonlinear campaign culled from Mega Man series, the title’s popularity broadened further in the ensuing years. For many players, DuckTales came to symbolize a halcyon era in gaming- a time when engrossing gameplay took precedent over overblown storylines and complex control schemes.

Undoubtedly, revitalizing the IP presented a considerable challenge. Muck with Scrooge McDuck’s escapades too much and purists will be displeased. Yet, merely offering a high-resolution makeover would do little to remedy some of the game’s admittedly antiquated elements. For the recent release of DuckTales Remastered for the Xbox 360, PlayStation 3, and Wii U, developer WayForward Technologies made a few deft alterations but also added some elements which impair the original title’s charm. The final result is a noble effort, but one which may ultimately disappoint nostalgic fans. 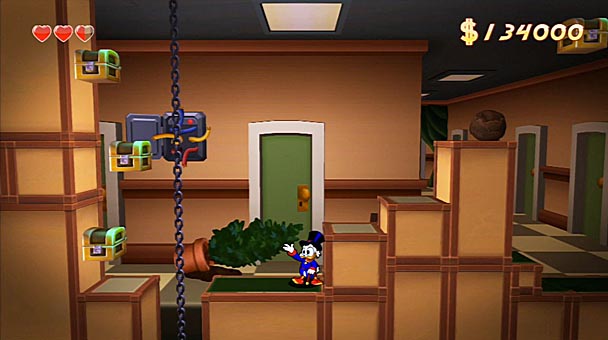 What are the game’s strengths? Adeptly, Remastered visuals and sonic components transport DuckTales to a modern age. Character sprites are devotedly drawn and animate fluidly, while parallax backgrounds endow the original game’s bitmapped environments with a cartoon-like ambiance. Small details, such as watching Scrooge McDuck struggle to escape from the mouth of a Piranha Plant offer moments of saccharine-sweet eye candy. Jake Kaufman’s rendition of the DuckTales’ soundtrack is unequivocally masterful, with each selection maintaining the plucky atmosphere of its source material, while adding a slight symphonic feel to each song.

Skillfully, Remastered maintains many of the qualities that propelled the original game into popularity. The game’s stages echo the general layout of the original, albeit with some assuaging of small details, such as shrouding some of the enemies which would spawn at the edge of the screen. Purists may opt for DuckTales’ original control scheme, which demanded players to press down to initiate pogo-jumping. However, most players will want to forgo the outmoded requirement, and instigate the hop with just a button press. Occasionally, a slavish devotion to the original cartridge is a drawback- such as when Scrooge descends onto a new screen as is dropped dangerously close to a foe. Yet largely, the game’s sense of exploration and promotion of score-chasing remains intact, with spawning gemstones and treasure chests persistently pushing Scrooge into perilous alcoves. Now, the benefit of collecting loot offers more than mere bragging rights. Players can use their currency to unlock concept art, sketches, and music. While McDuck wouldn’t approve of the impetuous purchases, it does endow the game a bit of replay value. 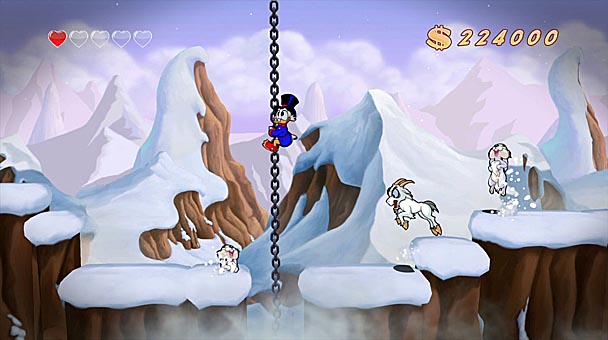 Beyond the changes made to the game’s introductory and concluding stages, WayForward also tweaked the boss battles which conclude each level. These showdowns now feel much more like contemporary clashes, obliging players to carefully observe attack patterns and look for signs of fragility.

What are the game’s weaknesses? Whereas the original game confined DuckTales’ skeletal storyline to a few pages in the accompanying instruction booklet, Remastered shoehorns narrative into each level.  The loquaciousness of the new tutorial level is understandable- after all, Scrooge’s cane pogo maneuver is fairly unique. But the constant barrage of cutscenes in each of the game subsequent settings (and amended final stage) soils the flow of action. While gamers may skip the cinematic via the pause menu, the frequency on these interactions is like viewing a pop-up inundated website. Ideally, dialog would occur during play- allowing the hop-and-bop gameplay to proceed without disruption. 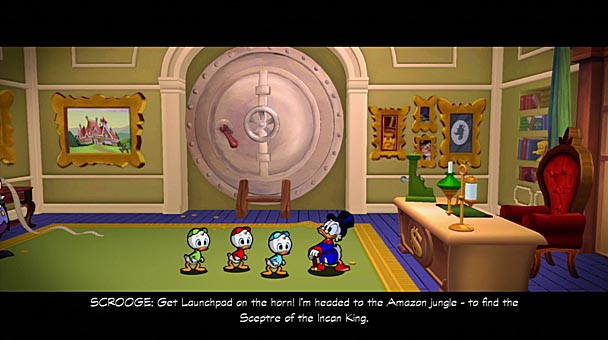 WayForward’s intention of bring back the cartoon’s original voice actors is commendable, especially considering that some of the show’s talent are now nonagenarians. Yet, the performance issued by the cast occasionally lacks the vivacity and quick pace of the television series’ conversations. Worse, the dialog is frequently insipid, misused on the explanation of a key used to activate an elevator rather than providing a comedic interaction.

Is it worth the money? Considering the original game and its Game Boy port can be found inexpensively, a fifteen dollar purchase of DuckTales Remastered grants two core amenities. While the graphic upgrade is enriching, the inclusion of a momentum-rupturing plotline turns out to be a detriment. As such, fans of the original will want to give this new rendition a try before spending their hard-earned coin on it. It’s that kind of economic prudence that would make Scrooge McDuck truly proud. 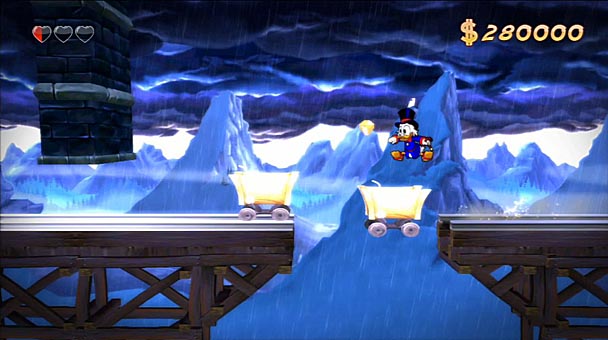 DuckTales Remastered Review
What is the concept? When the original DuckTales was released for the Nintendo Entertainment System in 1989, the title went on to become Capcom&rsquo;s biggest hit for the console, selling over 1.6 million copies across the North American, European, and Japanese markets. Although most licensed games during the era were of dubious quality, DuckTales confounded convention, established a watermark for the tie-in title. Bolstered by charming aesthetics (especially the five-channel rendition of the cartoon&rsquo;s theme song), an innovative jump mechanic, and a nonlinear campaign culled from Mega Man series, the title&rsquo;s popularity broadened further in the ensuing years. For many&hellip;

Summary : Although this revitalization brings the game into the twenty-first century, the inclusion of tedious, interruptive dialog proves to be foul, not fowl.

Previous: SteamWorld Dig: A Fistful of Dirt Review
Next: New Releases for the Week of August 16th-22nd, 2013