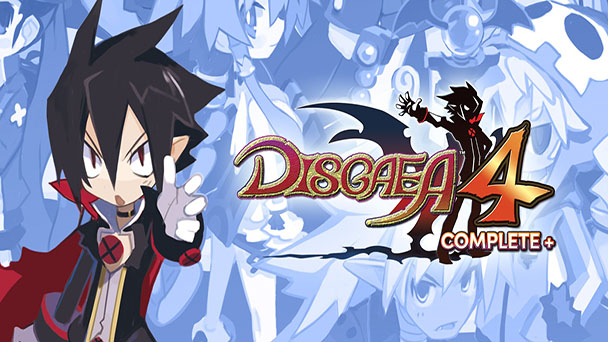 When Disgaea 4 was originally released for the PlayStation 3 back in 2011, its subtitle had a dual meaning. A Promise Unforgotten referenced not only the protagonist’s unwavering devotion to his word, but it also symbolizes Nippon Ichi’s tacit commitment to series supporters. Building upon the foundations established by the franchise’s preceding entries, Disgaea 4 delivered the type of eclectic cast, depth, and impish humor that Netherworld aficionados had grown to expect.

The release of Disgaea 4 Complete+ A Promise of Sardines Edition demonstrates N1 delivering on its pledge to portable players, offering a colossal compendium which consists of the original game, an assemblage of downloadable content, along with few indulging extra like additional chapters. As with the developer/publisher’s previous ports onto Switch, the package is a requisite purchase for Prinny fans. 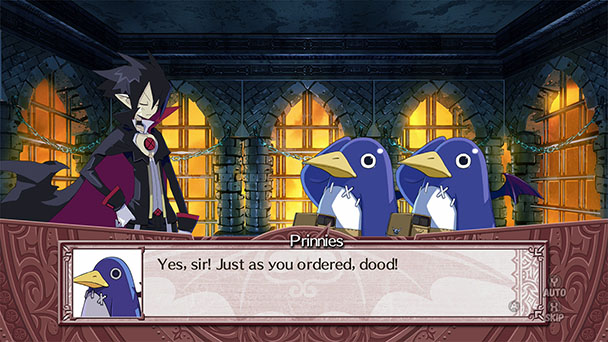 From the Napoleonic Laharl of Hour of Darkness to the inverted delinquency of Raspberyl in Absence of Justice, the Disgaea series has consistently showcased captivating characters; A Promise of Sardines is no different. Players follow the trajectory of disgraced vampire Valvatorez- a once-powerful figure relegated to laboring as a teacher in a maximum security Prinny penitentiary. When the dejected instructor discovers that the Netherworld’s administration (known as the Corrupternment) begins to condemn Prinnies for the realm’s escalating woes, he takes action- planning a rebellious coup to protect an oath.

Assisted by the dutiful servant Fenrich and a half-dead middle-schooler named Fuka (clad in a Prinny cap as the Corrupternment lacks the funds for a full suit), the dialog is dependably humorous. Referencing everything from Gunnery Sergeant Hartman’s tirade in Full Metal Jacket to flowery final boss soliloquies, the game’s targets are as varied as they are plentiful. Cleverly, Disgaea 4 Complete+ crescendos into a joyful pageant of N1 cameos, that are poised to delight franchise faithfuls. 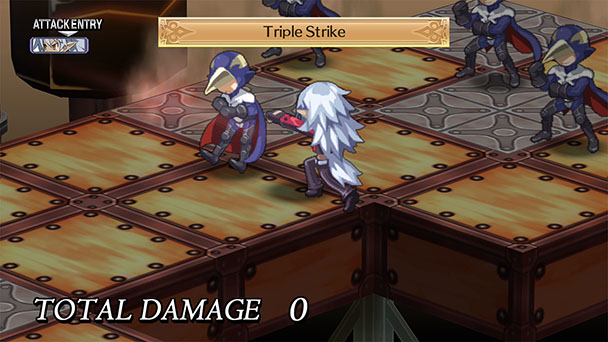 Complementing the game’s storyline is Disgaea’s distinctive turn-based battle system, which tasks players with controlling a small army of grid-based gladiators. Using a variety of physical, weapon-based, and magical strikes, success hinges on the strategic placement and deft utilization of each combatant. One example- adjacent allies increase the probability of a team attack, where associates can hammer a foe with additional hits. Of course, clustering teammates closely leaves the group open for a zoned attack.

On the upside, Disgaea 4’s gameplay in tailored to occupy two distinct groups. Tacticians can methodically position party members together for by taking advantage of stat-altering Geo Blocks. Although strategizing will take you far, the Item World extends the ability to persevere without meticulous party management. Here, players can persevere by augmenting their gear and level grinding. The downside is that the game’s AI is still patently predictable, with opponents consistently seeking out the weakest friendly units- making survival less about clever stratagems than min-maxing your way to domination. 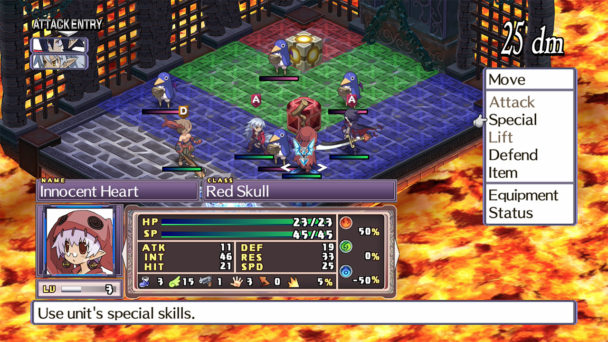 Absence of Justice’s “magichange” system makes a return here,  with one key change.  Previously, humans and monsters could be combined into a single weapon. Now, players can combine two beasts into a ‘mega-monster’ replete with intensified stats, and even combine this merged monstrosity with a human to create a formidable ‘mega-weapon’. To keep these abilities from becoming overpowering, there’s a stringent turn limit on the transformation.  Additionally, once the augmented unit is removed from battle, there’s a noticeable gap in the player’s roster. Another adjustment N1 made to Disgaea 4 can be found in the game’s punishment system- which allows players to convert foes into friends, and even extort money or loot locations from weaker antagonists.

Off the battlefield, a variety of elements vie for the player’s waking hours. There’s the senate, where gamers can push bills to unlock new party-optimizing permutations. With Disgaea 4, politicking has been supplemented by the introduction of the ‘Cam Pain HQ’, which recalled Absence of Justice’s classroom management. Here, completed maps unlock pieces of an overworld, allowing players to arrange their allies to raise the ferocity of their team attack or place symbols in an effort to buff their squad. 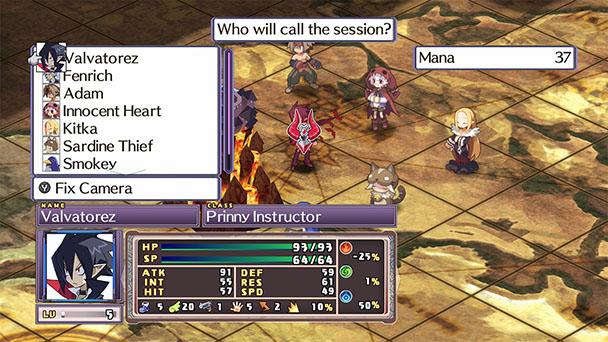 Disgaea 4 Complete+ includes all of the supplemental downloadable content that was added to the Vita re-release. Among the fifty pieces of DLC, are “The Flashback Episode”, in which gamers could appreciate Valvatorez and Fenrich’s rapport in a scenario set before the start of D4. There’s also ““The Fuka & Dresco Show” which is a four-part episode that centers on the ersatz Prinny’s quest for reincarnation.

The basis for the plus in the title, is the game’s increase in resolution to 1080p output. The escalation in fidelity just affects docked play, giving a bump in quality to Takehito Harada consistently eye-playing artistry. There are also a few of ‘quality of life’ amendments like auto saving or previewing the Magichange weapon for your monster class. You won’t notice them if this is your first time playing Disgaea 4, but they contribute a few understated conveniences drawn from later series entries. 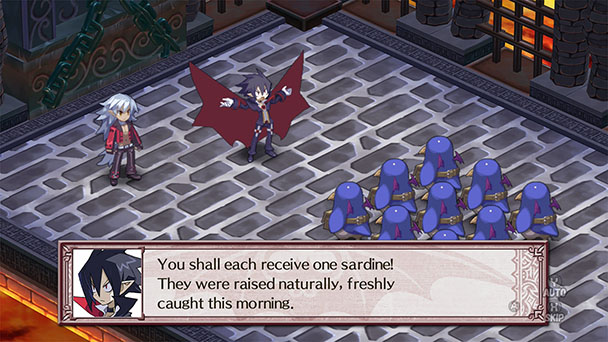 As a content-packed port of an already remarkable role-playing title, Disgaea 4 Complete+ A Promise of Sardines Edition follows Nippon Ichi’s tradition of releasing the definitive iteration onto portable systems. Much like the ‘Game of the Year” editions which present a plethora of supplemental content at a reasonable price, A Promise of Sardines Edition is a no-brainer for newcomers and a worthwhile purchase for previous owners who want to revisit the item world on their current hardware.

Disgaea 4 Complete+ A Promise of Sardines Edition was played
on the Switch with review code provided by the publisher.

Disgaea 4 Complete+ A Promise of Sardines Edition review
When&nbsp;Disgaea 4&nbsp;was originally released for the PlayStation 3 back in 2011, its subtitle had a dual meaning.&nbsp;A Promise Unforgotten&nbsp;referenced not only the protagonist&rsquo;s unwavering devotion to his word, but it also symbolizes Nippon Ichi&rsquo;s tacit commitment to series supporters. Building upon the foundations established by the franchise&rsquo;s preceding entries,&nbsp;Disgaea 4&nbsp;delivered the type of eclectic cast, depth, and impish humor that Netherworld aficionados had grown to expect. The release of&nbsp;Disgaea 4 Complete+ A Promise of Sardines Edition demonstrates N1 delivering on its pledge to portable players, offering a colossal compendium which consists of the original game, an assemblage of downloadable content,&hellip;

Summary : While offering only a nominal improvement over the Vita version of Disgaea 4, the Promise of Sardines allows Switch owners to bask in the enjoyment of one of the best SRPGs from the seventh console generation.