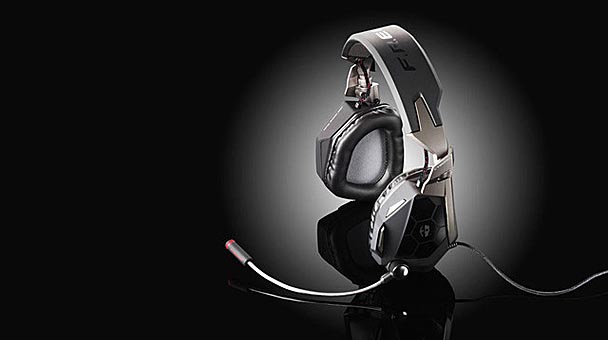 Since reviewing Mad Catz’s F.R.E.Q. 7 two months ago, the headset has become the predominant peripheral for our aural activities. Bolstered by a durable build quality and the ability to function with both PCs and smart phones, the device is used for everything from gaming sessions, leisure listening, Skype conversations, to podcast recording. Yet, despite the device’s resilience and versatility, the F.R.E.Q. 7 doesn’t come cheap- the $200 MSRP is likely to transcend the comfort level of pennywise consumers. For those willing to relinquish the decadence of Dolby Digital Surround Sound, Mad Catz’s F.R.E.Q. 5 headset offers a comparable set of qualities at a reduced price point.

Like its premium brethren, the F.R.E.Q. 5 comes housed in a stylish and substantial packaging. The angular box is both eye catching as well as poised to protect the headset during transit. Mercifully, Mad Catz shirks the customary clamshell enclosure, using a single piece of molded plastic to secure the peripheral. The remaining inclusions forecast the F.R.E.Q. 5’s ambition of minimalism. Beyond the headset, owners will find only a single-sheet setup guide, a detachable microphone, and two braided cords which attach to the F.R.E.Q. 5’s female USB mini-connector.  One of these is a two meter cable which allows users to plug the headset into a USB port. The other is a single meter cord outfitted with a 3.5mm plug, permitting the unit to be plugged into a smart phone, or portable gaming system. Connecting the unit to consoles is possible with a few supplemental wires (purchased separately), but since the F.R.E.Q. 5 wasn’t intended for this functionality, players will be forced to forgo the use of the microphone. 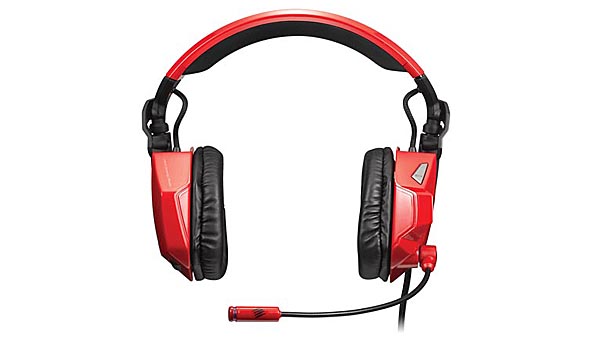 Conveniently, the F.R.E.Q. 5 is an indisputably ‘plug and play’ device, and was instantly recognized on both PCs and Macs without the requirement to install any additional drivers. On our Windows 7-based systems, the headset received its own device setting in the volume mixer, with a few clicks allowing us to tweak the audio output levels produced by running apps. Alternatively, volume can also be controlled with the roller input that is located on the right side of the peripheral. Although it’s a trivial nuisance, this knob isn’t a true analog dial, but seems to adjust output levels in larger increments. Therefore, obsessives will likely want to modify the volume level though software control.

The F.R.E.Q. 5’s other sonic customization option can be found on the crown of the left headset. Here, a single button allows owners to cycle through the devices three equalization settings. Defying contemporary trend, Mad Catz’s peripheral core output is unsullied. Out of the box, the headset doesn’t deliver the overblown low frequencies of the Beats by Dr. Dre line or the muddy midrange output of most low-cost sound solutions. Instead, the F.R.E.Q. 5 produces unaltered sound throughout the auditory spectrum. On the unit’s Game setting, explosions and gunfire are articulated convincingly, without overpowering the treble. Switching the device to Music mode exhibited a pleasing amount of instrumental separation, distinctly delineating drums, guitars, synths, vocals and bass lines. The F.R.E.Q. 5’s Chat mode beefs up the mids, allowing Skype chat sessions to seem notably full-bodied. Regretfully, the headset’s equalization settings are only utilized when owners are connected through a UBS port; when listening via the 3.5mm jack, no adjustments are available. 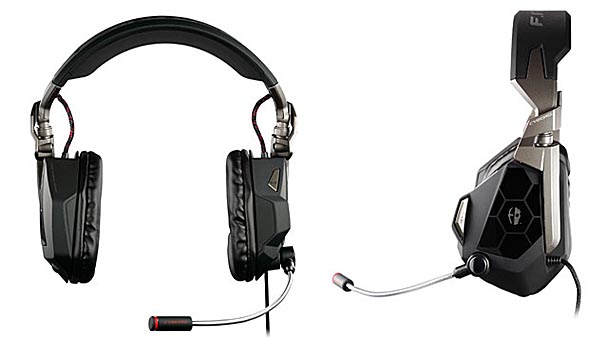 Microphone quality can often be a contentious issue for gaming headsets. Commendably, the F.R.E.Q. 5 performs glowingly. Once the flexible microphone arm is screwed into the left side of the headset, it should be moved about an inch from the owner’s mouth, or else it may pick up breathing. Properly positioned, the input is outstandingly rich, rivaling the quality of a standalone condenser microphone. The F.R.E.Q. 5’s noise cancellation helps to remove ambient noise but don’t expect miracles- the shrill klaxon of a ringing mobile will still cut through a conversation. A button adjacent to where the microphone plugs into the headset allows for easy muting, even illuminating the tip to indicate its suppressed status.

Strengthened by a rugged metal construction, the F.R.E.Q. 5 is remarkably robust, showing no signs of cracks or breakage after repeated drops on a carpeted floor. Even more marvelous is the peripherals braided cord, which survived several roll-overs by an occupied office chair. While these kinds of incidents flattened or frayed typical plastic wires, the F.R.E.Q.’s tether remained resilient. An adjustable aperture allows almost any size cranium to wear the headset with a variable degree of snugness. Although the cans are secure enough to be used while exercising, having them taut for long period may induce a bit of discomfort. However, for most marathon gaming sessions the F.R.E.Q.’s produced little fatigue. During these durations, the faux leather earcups were solid enough to muffle outside noise, while breathable enough to not make our ears perspire. 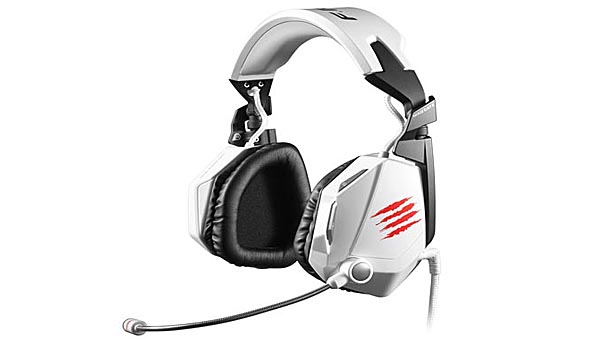 Blending impressive engineering and first-class performance, the F.R.E.Q. 5 is one of the best headsets to be found in the $150 range. Although cheaper alternatives can be found, the device’s ability to admirably tackle a variety of tasks places Mad Catz’s peripheral at the summit of sonic devices. We’ve been using the premium F.R.E.Q. headset for months and have yet to find a single blemish in performance, comfort, or craftsmanship.

F.R.E.Q. 5 Headset Review
Since reviewing Mad Catz&rsquo;s F.R.E.Q. 7 two months ago, the headset has become the predominant peripheral for our aural activities. Bolstered by a durable build quality and the ability to function with both PCs and smart phones, the device is used for everything from gaming sessions, leisure listening, Skype conversations, to podcast recording. Yet, despite the device&rsquo;s resilience and versatility, the F.R.E.Q. 7 doesn&rsquo;t come cheap- the $200 MSRP is likely to transcend the comfort level of pennywise consumers. For those willing to relinquish the decadence of Dolby Digital Surround Sound, Mad Catz&rsquo;s F.R.E.Q. 5 headset offers a comparable set&hellip;

Summary : Mad Catz’s F.R.E.Q. 5’s swap Surround Sound functionality for a $50 savings. While that places them a bit above the price of competitors, you’re paying for incomparable build quality.