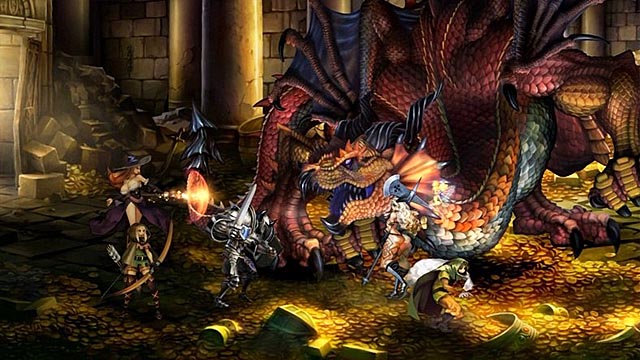 It’s a shame most stateside Saturn owners were never able to experience Atlus’ Princess Crown–  an action RPG which had some of the most sumptuous hand-drawn animation seen on Sega’s 32-bit system. Fourteen years later, I still recall becoming hopelessly captivated  after seeing the title in action at one of the local import shops, as the game’s protagonist confronted a screen-filling dragon. Amazingly, the antagonist’s rendering was so detailed, players could perceive the enemy’s burdened breathing.

Over the years, Princess Crown‘s developers splintered off, with key members of the team forming Vanillaware. This studio has maintained their focus on delivering vibrant animation, striking characters art, and opulent backdrops in PS2 and Wii titles such as Odin Sphere, GrimGrimoire and Muramasa: The Demon Blade. The recent E3 unveiling of Dragon’s Crown reveals Vanillaware’s first foray into the next-generation

Available for both the PlayStation 3 and PlayStation Vita, Dragon’s Crown is a retro inspired brawler, granting players access to six distinct character classes- Amazon, dwarf, elf, fighter, sorceress and wizard. Adventuring with a quartet of AI controlled or online players, gamers are tasked with annihilating a succession of foes in their quest to exterminate an ancient dragon. Look for the title in the Spring of 2012.