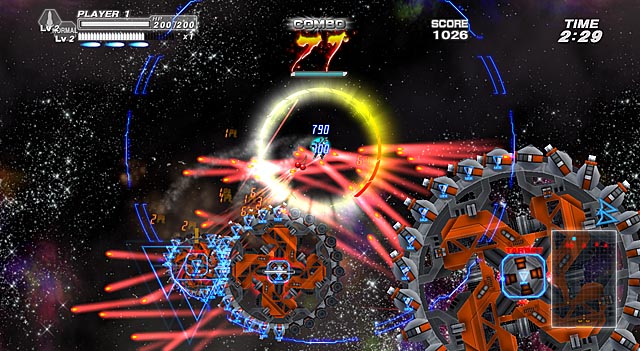 Historically, Japanese developer Treasure have enjoyed pushing consoles to their absolute limits. Whether explicitly stated on the Engrish-reading pause screen of 1995’s Alien Soldier (“now is the time to the 68000 heart on fire”) or articulated in the unprecedented sprite rotation and scaling of 1993’s Gunstar Heroes, the Tokyo-based studio has cultivated an oeuvre of fastidious coded titles. Arguably, the quintessential example of this hardware-wringing work is Bangai-O. Initially, a limited run Japanese Nintendo 64 cart, the game was later reworked  in 2001 as a Dreamcast title, then reconstructed for 2008’s DS title, Bangai-O Spirits. While each entry has tweaked the basic rules of the franchise, one aspect has remained unchained: Bangai-O centers on pushing a unfathomable number of sprites around the screen to create one of the most engrossing experiences in gaming.

For better or worse, recent XBLA release Bangai-O HD: Missile Fury ups the ante even further. Early levels push protagonists through overcrowded ant colonies and star-filled skies brimming with turret fire, missiles, and irate enemies. With a reported 5,000 objects on the screen at once, each of the game’s levels erupt into gorgeous, firework-like showers- defying gamers to stay focused as they maneuver through torrential storms of a opponent shot. Yet, Bangai-O‘s aspirations have consistently transcended the bullet-hell genre. Expanding on the level design of Spirits, most of Missile Fury’s stages require players to solve cunning conundrums to balance the odds against an overwhelming onslaught of enemy forces. 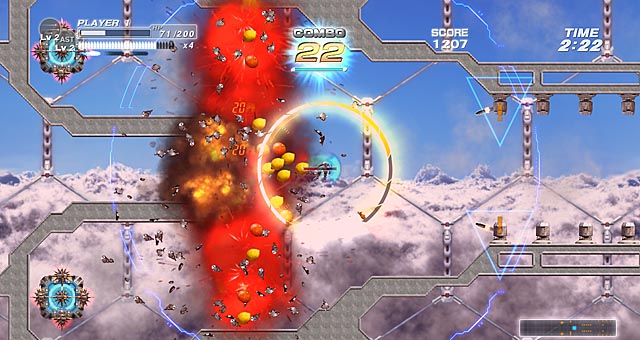 Typically, countermeasures can be found in the game’s mech-suited protagonist. There’s the customary selection of homing missiles, bouncing lasers, and napalm shells which grow in potency as players get close to foes- all directed by the direction of the right thumbstick. A tap of the right trigger can induce a short invincibility dash or even freeze inbound aggressors for a few seconds. Bangai-O‘s signature move remains the game’s most  powerful weapon- with a press of the left trigger, players send out a barrage of firepower equivalent to the amount of encroaching flak. It’s a magnificently tempting mechanic that lures players into dangerous territories instead of taking pot-shots from cautious ranges. Of course, with each stage’s merciless timer, seconds can’t be squandered away in an infrequent safe zone.

Like previous entries in the franchise, Bangai-O‘s most devastating assaults are powered by  pieces of fruit left behind vanquished antagonists and structures. With the increased intensity of Missile Fury‘s mayhem, players no longer have to collect the edibles, Pac-Man style; instead, it’s magically pulled toward your Bangai-O and added to your score. While point-chasers are certain to enjoy the title’s leaderboards as well as replay videos for  the top ten players of each stage- currently the functionality seems stultified by launch week enthusiasm. I was able to download less than half of the game’s replays. 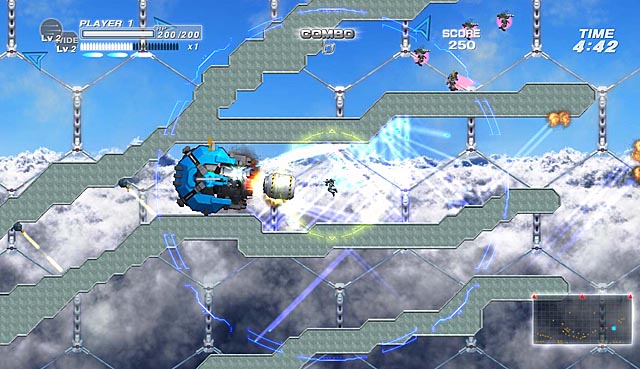 Equally constricted is the game’s level editor, which while  robust enough to recreate any of the game’s bundled stages, limits sharing to individuals on your friends list. Regrettably, Missile Fury missed an opportunity to develop  a community driven by budding designers and community ratings. Despite this setback, the level editor is fairly intuitive- allowing designers to jump in at any time and test their stages.

Beyond these transgressions, Bangai-O HD: Missile Fury has a few additional flaws which may prohibit the title from achieving mainstream success. Like many Treasure titles, the game can be painfully difficult, asking players to repeat stages until a stratagem is gleaned. While the assistance of a cooperative partner is a common solution to overwhelming adversaries, the title’s multiplayer mode is beset by the type of slowdown that solo campaign nobly avoids. Smartly, progress in Bangai-O never comes to a grinding halt- players can skip a level once it has been failed three times. 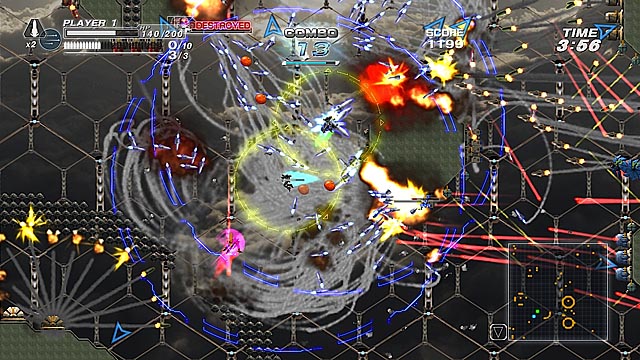 Gamers might be hard-pressed to find a title that requires as much concentration as Bangai-O HD: Missile Fury. Where many diversions may offer a handful moments were sharpened reflexes and unmitigated attention are vital for advancement, each of Missile Fury‘s 100+ stages necessitate these abilities. This intensity is certain to win over the hearts of proficient players, while more casual gamers may end up feeling Bangai-Owned. Like most Treasure titles, Missile Fury is an exhilarating, fastidiously crafted love letter to the hardcore, its margins overflowing with missiles locked-on to our hearts.

Previous: New Releases for the Week of May 8th, 2011
Next: First Ten: Gatling Gears