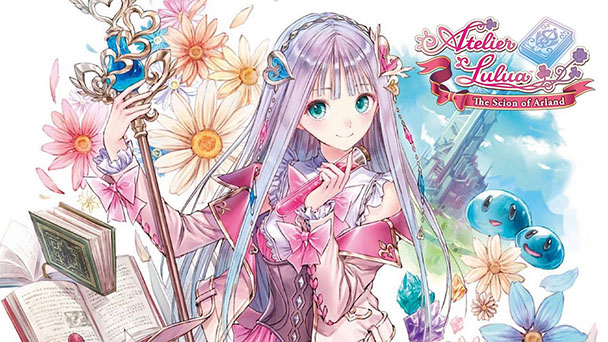 Occasionally, games can seem like a jumble of ideas, with little sense of unity. Or perhaps, efforts like the recent release of Atelier Lulua: The Scion of Arland happen to blend ideas together so seamlessly, they make peers appear a bit slipshod. Unified by the theme of legacy, Lulua simultaneous upholds while gently challenges tradition. Combined with an array of gratifying mechanics and visual sumptuousness, this is definitely one of the more appealing entries in the franchise’s twenty-game history.

After Ayesha, Escha & Logy, and Shallie’s trek through the “Dark” arc, Sophie, Firis, and Lydie & Suelle journey across the “Mysterious” trilogy, Atelier Lulua returns us to the land Arland. A cherished region for devoted Atelier fans, it was first introduced as a kingdom before becoming a republic and subsequently absorbing the rural state or Arls in Atelier Meruru. Given the seven-year duration since Meruru’s release, revisiting Arland can feel like a nostalgic homecoming. Even if you missed the PlayStation 3, Vita, Switch and PC iterations, there’s a chance at familiarity with cast or contexts thanks to streaming or detailed discussion. 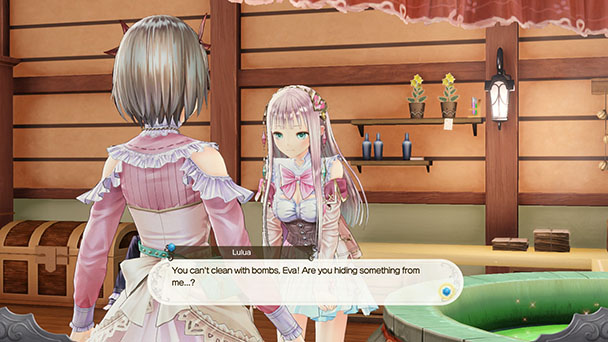 Naturally, neither characters nor locations have been stagnant since the series last visited Arland. Expectedly, players step into the role of Elmerulia (or just “Lulua”) Frixell, the daughter of Rorolina “Rorona” Frixell. The Arland arc depicted her rise from fumbling apprentice to becoming a respected and eminent alchemist. Naturally, that means her work takes her away from home with worrisome regularity. Her distinction also means that Lulua has a lot to live up to. And while upholding the family name might be as culturally significant in regions outside of Japan, you’ll certainly appreciate the sense of responsibility inherited by the character. Whereas expectations were often muted in many Atelier outings, Lulua has a village of onlookers expecting a prodigy.

As she travels through the early chapters of the game, we get to see the impact that Arland’s great alchemists had on the region. Surprisingly, they’re revered like celebrities, even having statues built in their honor. But public fame has its downsides and we don’t meet the last generation of alchemists for a quite a while. Smartly, developer Gust know that’s a primary incentive. Just when we think we’re going to be reunited with Rorona, Totori, and Meruru, the studio explains repeatedly why they aren’t around. When we finally do mean them, the tactic becomes clear. Gust understands how to toy with our sentiments and the how powerful the payoff can be when we’ve been teased for so long. 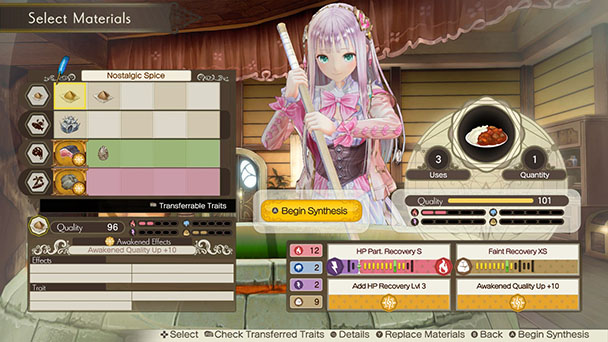 Arland (and specially the town of Arklys) has grown in beauty, primarily though advancements in programming and technology. All of the vaguely medieval European inspiration remains present, but a lot of labor has been devoted to detail. On PC, the landscapes are rendered with care, making every waterfall, cottage, and winding staircase attain to the kind of quaintness that the Atelier series has been aspiring for. The first time you’re your sent scavenging for materials, try not to be delighted by the loveliness of the landscape, as sparkles in the distance signify the presence of collectables. Regularly, I explored the scenery not out of any obligation from the game, but because the geography had so much charm.

Similarly, Mel Kishida’s (Hanasaku Iroha, the entire Arland arc, Blue Reflection) character design are spectacular. Instead of opting for skin-baring fan-service, Kishida opts for graceful femininity, with attire that wonderfully frilly, yet form-fitting. It’s so good that Gust opted to forgo the traditional portraits used during conversational bits. Amazingly, nothing is lost and the first time, I saw one The Scion of Arlan’s characters present a well-animated, stunningly beautiful post-combat pose, I knew the game would pamper my pupils. Quite often it did, whether it was the animation depicting a trade of powers during combat or just because the cast looked so damn kawaii. 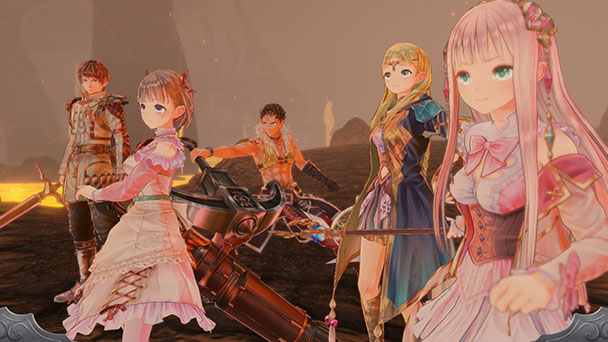 In staying true to convention, The Scion of Arland adhere to the cyclical pursuits of exploration, synthesis, and battle to drive the plot line. It’s evident that each element was thoroughly considered, with the game opting to simplify its fundamental tasks, and only adding nuance once players are familiarized with each activity.

Essentially, synthesis has its own sub-cycle of tasks, rooted in Alchemyriddle, a mysterious book with writing is only visible to Lulua. By undertaking the usual procession of requests from people, you’ll gradually reveal new passages of text that opens things like new recipes and gathering spots, effectively reinvigorating this gameplay loop. The big change here is the removal the Atelier’s continuous time limits. Now, you push the plot along, which reduces the sense of urgency but also diminishes the stress of meeting deadlines. Although the Alchemyriddle’s light puzzles weren’t difficult, revolving around analyzing pictures to deduce locations and materials, it’s a welcome addition to the game’s formula. Being able to craft in bulk is another nice bonus. 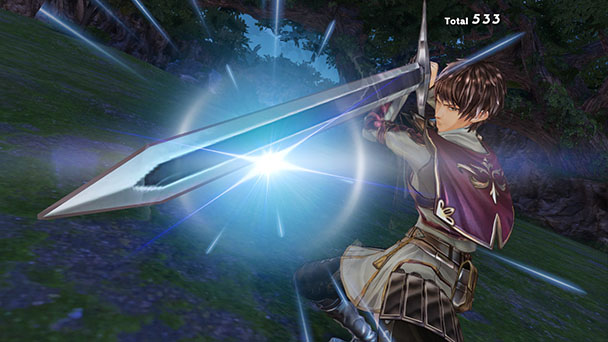 The speed of battle is increased by parties comprised of up to three main combatant and two support characters as well as the actual pace. Here, Atelier Lulua doesn’t deviate from form too much, with the turn-based skirmishes still opting for simplicity. But camera positioning is now angled and more fluid, in order to showcase both character and enemy modeling as well as the imaginative attack animations. Like most Atelier games, your synthesized items are going to help you in combat. But sadly, they’re only truly essential in the late game, which slightly undermines the depiction of Lulua’s mounting talents.

Unquestionably, Atelier Lulua: The Scion of Arland sets a new watermark for the series’ visuals. Fans that have stuck with Gust’s game across a few chapters will be delighted by the game’s visuals, as well as the refences to the past. But remarkably, this game could also work as an entryway to the franchise. Here, many of the familiar mechanics have been simplified, making for a very accessible offering. Likely, Lulua’s sunny disposition and tale of self-actualization might inspire you to revisit Arland’s older entries. Much like the trajectory of Atelier’s leads, it’s a path brimming with immense potential. 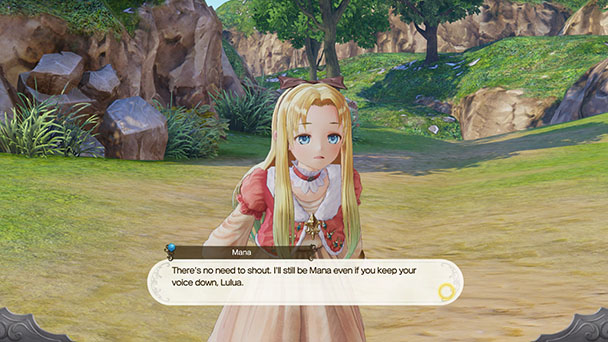 Atelier Lulua: The Scion of Arland was played on
PC with review code provided by the publisher.

Atelier Lulua: The Scion of Arland review
Occasionally, games can seem like a jumble of ideas, with little sense of unity. Or perhaps, efforts like the recent release of Atelier Lulua: The Scion of Arland happen to blend ideas together so seamlessly, they make peers appear a bit slipshod. Unified by the theme of legacy, Lulua simultaneous upholds while gently challenges tradition. Combined with an array of gratifying mechanics and visual sumptuousness, this is definitely one of the more appealing entries in the franchise&rsquo;s twenty-game history. After Ayesha, Escha &amp; Logy, and Shallie&rsquo;s trek through the &ldquo;Dark&rdquo; arc, Sophie, Firis, and Lydie &amp; Suelle journey across the&hellip;

Summary : The Atelier franchise’s formula of exploration, synthesis, and combat shows no sign of stagnancy in The Scion of Arland. Adjustments to mechanics, beguiling aesthetics, and a callback to previous entries make this an alchemical adventure you shouldn’t miss.