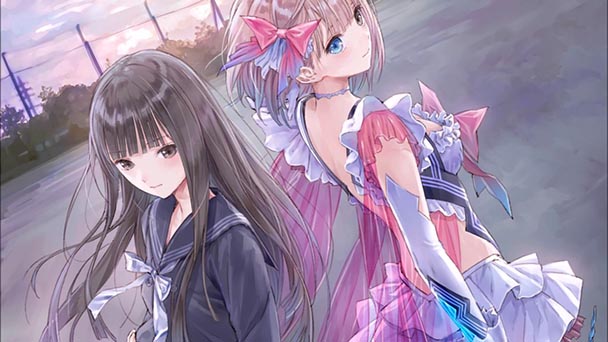 Since 1997, Gust has crafted eighteen entries in the acclaimed Atelier franchise. Almost all of them have focused on a young women’s journey toward self-actualization, as she grows from kind-spirited klutz to an accomplished alchemist who is able to utilize her abilities to altruistically help those around her. As such, if any developer were to tackle the magical girl genre, the Nagano-based corporation would seem like one of the most sensible choices.

With the release of Blue Reflection, the studio demonstrates the expertise that they’ve cultivated over the last two decades, mirroring the determination and diligence of one of their own protagonists. And while the PlayStation 4 and PC release isn’t without a few conspicuous blemishes, the experience is poised to please fans of works like Sailor Moon, Cardcaptor Sakura, and Puella Magi Madoka Magica. 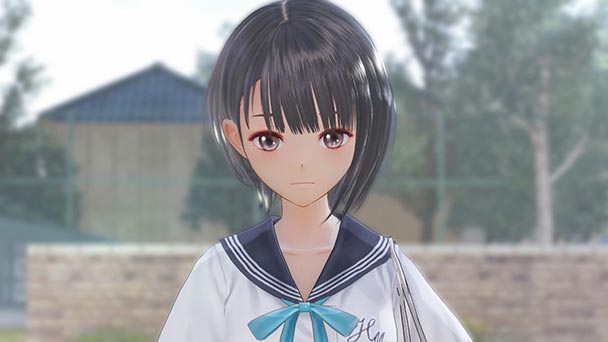 The game’s opening scenes do a remarkable job at foreshadowing the slightly melancholic tone that permeates Blue. We first meet the game’s protagonist, Hinako Shirai, as she’s reluctantly returning to the Hoshinomiya Girls High School. The cause of her apprehension soon becomes clear, as we learn that Hina was once a prodigious student of ballet whose career was abruptly ended by a debilitating leg injury. A chance encounter with a former classmate feels like an interrogation for the timid lead. Inadvertently, the probe evokes a sense of envy within her colleague.

The classmate’s behavior becomes increasingly enigmatic, and even stranger, a rose and white colored aura surrounds the inquisitive character. Without warning, Hina finds herself seemingly transported to an otherworldly another context, with a lanky, non-humanoid interloper exhibiting determined aggression. Still reeling from the transition, the protagonist takes notice of a ring on her index finger and under direction of a disembodied voice, focuses on the band, triggering a transformation. Clad in an ostentatious version of the traditional seifuku (sailor-style Japanese school uniform), a case of heterochromia, and an azure-colored blade, Hina is now a “Reflector” who easily defeats the enemy. In this world, known as the Common, not only does the lead exhibit super-human skills and power, but her leg is free of injury. 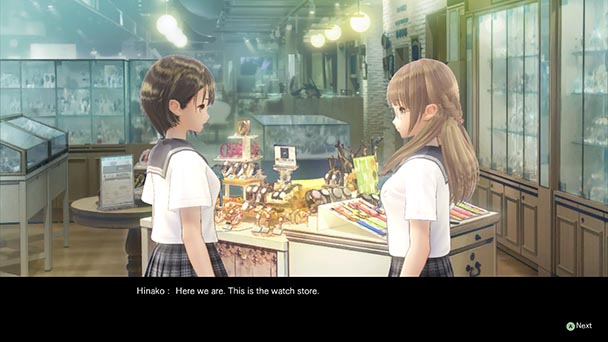 Like almost all entries in the magical girl genre, Blue Reflection is rich in metaphor. Much like adulthood, becoming a Reflector endows Hina with new abilities, which both contribute and complicate her life. As such, learning to seize control of these new attributes becomes a source of conflict, demanding perseverance from the lead. For Hina, and her requisite close acquaintances and fellow Reflectors, twins named Yuzuki and Lime Shijou, the opposition found in Common also is symbolic. Girls who are able to control their emotions are labeled as “rampant”, and naturally it’s up to the Reflectors to uphold a sense of civility by subduing these sentiments before they soil social life in the real world.

While Blue Reflection has all of the necessary constituents for magical girl narrative, occasionally the storytelling stumbles. Most often the problem happens with the game pushing exposition along too quickly, as if Gust assumes the audience will grow uninterested by some of the game’s transitional moments. Take for instance, Hina’s inaugural change to Reflector. While we know that the change is inevitable, there’s little build-up to emotionalize the moment. The shift from disheartened schoolgirl to obligatory transformation sequence comes quickly, like the second season of a mahou shoujo anime that speeds through the information we already know. A source of the enjoyment in the genre stems with the lead steadily learning about and seizing control of her new abilities. But here, Gust gives little time to these elements, which are imperative nuances. 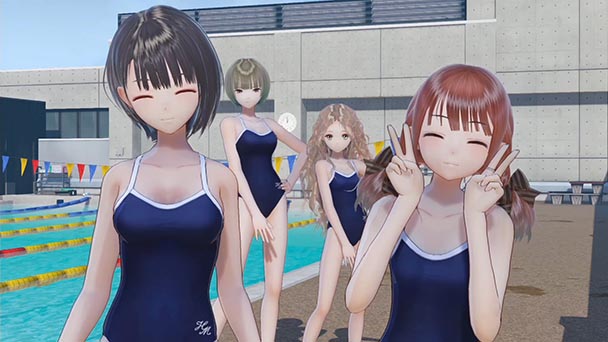 Yet, elsewhere Blue Reflection moves with a tranquil pace more fitting for its ‘slice of life’ style approach. Days are spent exploring the meticulously render halls of the Hoshinomiya academy, permitting Hina to explore, socialize with schoolmates, and or her mobile phone. Calling these sections on homage to Persona wouldn’t be far off the mark, as many of Hina’s temporal decisions have consequences. Spending time with a friend going to karaoke or choosing between taking a bath and study affects things around Hina, even influencing the events of the next day. Compared to the Atelier game’s where there’s often a strict schedule to cultivate a sense of tension, Gust opts to not rush players along, likely echoing the perspective of the protagonist.

Intermittently, you will visit the Common, with helps Blue Reflection recreate the episodic feel of anime. Typically, after meeting a classmate, she’ll suffer an emotional breakdown, prompting you to travel into the randomly-generated realm that represents each girls’ consciousness. There, confront demons and stabilizing elements known as Fragments which help to quell the tempestuous emotions of classmates as well as help when tackling the game’s bosses. Once these matters are settled, the girl will often turn into a support character or friend, once again replicating the cycle of a televised series. In overview, the structure might feel simplistic, but there’s gratification to be found in the game’s rhythm. 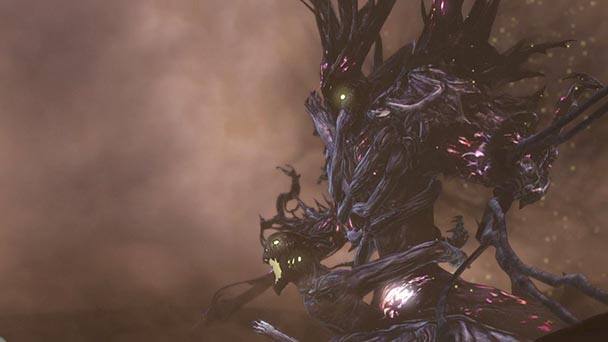 Like most Gust games, combat isn’t a central focus, but managed to remain consistently entertaining. The key to success during these turn-based battles is to monitor the timeline that dictates movement order. Here, specific attacks will effectively stun foes, delaying their turn, and giving parties another opportunity to put them down before retaliation. Unsurprisingly, the strikes that induce Knockbacks are tempered, requiring MP to use and often inflicting smaller amount of damage. Blue Reflection’s movement from conventional role-playing item usage is refreshing, but with parties healing after every conflict, the game offers only a diminutive challenge when facing subordinate adversaries. Boss battles, are on the other hand are significantly tougher; it’s rather disheartening that that aren’t more of them.

Visually, Blue Reflection frequently meets its elevated ambitions. Generally, characters show a substantial amount of detail- and more importantly display facial expression and the gestures that reveal what each character is thinking or feeling. Locales are just as adept. While the suburban Hoshinomiya academy isn’t enormous, attention went into making the school as authentic as possible. The Common’s wide, outdoor spaces extend a nice juxtaposition, but loading screens ebb at the feeling of immersion. Unquestionably, the biggest graphical issue is the game’s tendency to sputter, sullying the semblance of magical realism. It doesn’t happen consistently, but when it does, it’s difficult to overlook. For some, the game’s transparency modeling will help compensate, with the game exhibiting water permeability exceptionally well. 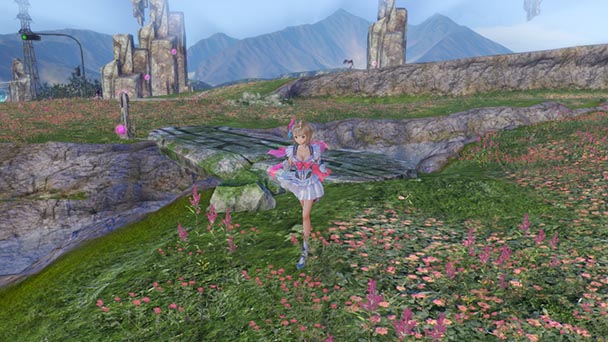 Despite some pacing and aesthetic concerns, Blue Reflection does so many things right. From the lingering sense of woe encapsulated in Hina’s return to the feeling of exhilaration when she’s leading the team and fighting demons while donning frilly skirts, the game echoes the spectrum of emotions found in magical girl properties. There’s a plethora of promise here, and even if Gust doesn’t capsulize on every opportunity, Reflection’s easygoing charms are poised to conquer all but the most nit-picky players.

Blue Reflection was played on the PlayStation 4
with review code provided by the publisher.

Blue Reflection
Platform:
PlayStation 4, PC
Developer: Gust
Publisher: Koei-Tecmo Games
Release date: September 26st, 2017 (US)
Price: $59.99 (PS4), $53.99 (PC) via Steam
Blue Reflection review
Since 1997, Gust has crafted eighteen entries in the acclaimed Atelier franchise. Almost all of them have focused on a young women&rsquo;s journey toward self-actualization, as she grows from kind-spirited klutz to an accomplished alchemist who is able to utilize her abilities to altruistically help those around her. As such, if any developer were to tackle the magical girl genre, the Nagano-based corporation would seem like one of the most sensible choices. With the release of Blue Reflection, the studio demonstrates the expertise that they&rsquo;ve cultivated over the last two decades, mirroring the determination and diligence of one of their&hellip;

Summary : In a perfect world, magical girl life-sims would be as ubiquitous. But there’re not, which makes it easier to overlook Blue Reflection’s minor transgressions. Hopefully, this won’t be the last we hear from Hina and friends.