Take It To the Bowl- NCAA Football 12 Interview 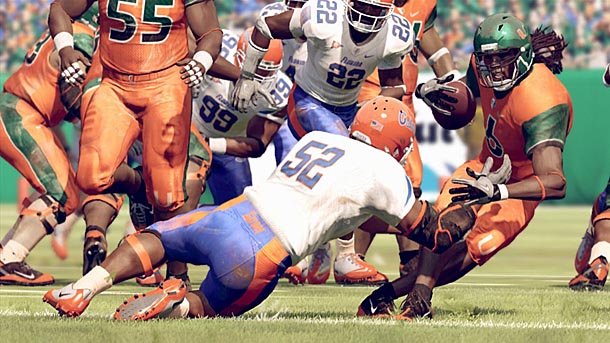 In anticipation of next week’s release of NCAA Football 12, we spoke with associate producer, Ben Haumiller, about enhancements, additions, and just how deep the simulation goes.

Tech-Gaming: What are some of the major changes, additions, and tweaks which have been made to NCAA Football 12?
Ben Haumiller: That’s a huge question to tackle out of the gate. There have been a ton of improvements to every aspect of the game. From the visuals to gameplay to Dynasty to Road to Glory, and all points in between NCAA Football 12 is the most authentic college football simulation to date. When talking about the visual improvements of the game you have to start with the additions to the pre-game atmosphere. Mascots like the Ramblin’ Wreck of Georgia Tech, War Eagle at Auburn, and Chief Osceola planting his spear at midfield for Florida State, the iconic images and mascots that make Saturdays so unique are a big part of the presentation in NCAA Football 12. Add to that the upgrades in the ESPN broadcast package, and improvements like 3D Grass and HDR lighting this is the best looking game we’ve ever made.

Switching over to gameplay, the biggest enhancement is the new collision based animation system. What this means is that animation begin at the point of contact rather than having players suction into each other to begin a tackle, block, or catch animation. By eliminating the suction, we’ve given the gamer complete control until the point of impact, which is a huge upgrade.

When it comes to game modes you would be hard pressed to find two deeper experiences than Dynasty and Road to Glory. In Road to Glory it all starts with the High School experience. You are now able to go through your full high school senior year, playing Ironman, and getting recruited at each position. Once you make it to college, earn your coach’s trust by your actions in practice and on the field to unlock additional abilities like calling audibles if you don’t like the play the coach called.

In Dynasty mode the two major improvements are the addition of Custom Conferences and the Coaching Carousel. With Custom Conferences, you can now alter conference membership to not only match what happens in the real world but also make your own fantasy edits. Now you can grow a conference to 16 members, shrink them down to as few as 4, as well as update the rules for each conference and BCS bowl tie-ins. This is by far the most in-depth and customizable feature we have added in a long time. With the Coaching Carousel we implemented the role of you as the coach on the team. You can start out as a coordinator, just controlling your side of the ball, and work your way up to become the head coach. With the coaching carousel every coach has a contract they must live up to; coaches that can’t live up to their contract goals can find themselves looking for a new job as the carousel cranks up and coaches move from job to job taking their playbooks with them. The addition of the carousel is a huge addition to the replay value of Dynasty mode as your path as a head coach will never be the same twice. 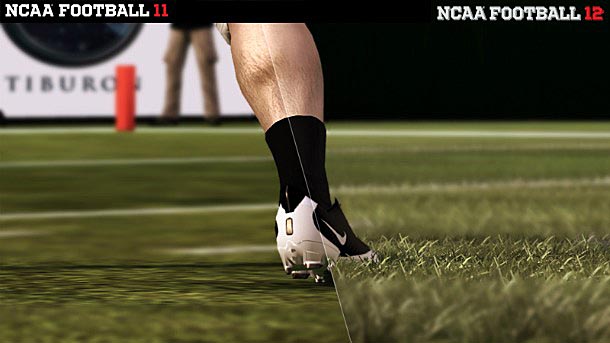 T-G: NCAA has been gradually expanded from consoles, to the web, so that the game can take over our workdays. What changes have been made to the online dynasty mode?
BH: It’s no secret over the past two years we have made a big effort to  make Online Dynasty accessible anytime and anywhere. New to the dynasty.easports.com website is the ability to super sim your games vs. the CPU as well as giving the commissioners the ability to advance the week from the web. These two features are premium content that’s available for a onetime fee each. Once you acquire access to these features you will be able to participate in your Online Dynasty games vs. the CPU from the web. You will have full access to your playbook, depth chart, and stats as you make decisions on what plays are run and simulate the results. Giving commissioners the ability to advance the week no matter where they are means the end of everyone waiting on their commissioner to get home and fire up their console just to keep the Dynasty moving. Now the commish can log online, advance the week, and keep everyone going.

T-G: Tell us how is change initiated  within the NCAA franchise? How much comes from player feedback, focus testing, or from the developers internally?
BH: I think it is equal parts of each. As game developers we are always discussing things that we would like to add to the game, and how we would want to implement those features. Our community is an extraordinarily focused group that loves to let us know both what they like about the game as well as what they would like to see added/changed. Focus testing comes into play as a way to make sure we are making the right decisions on what we are going to add each year. 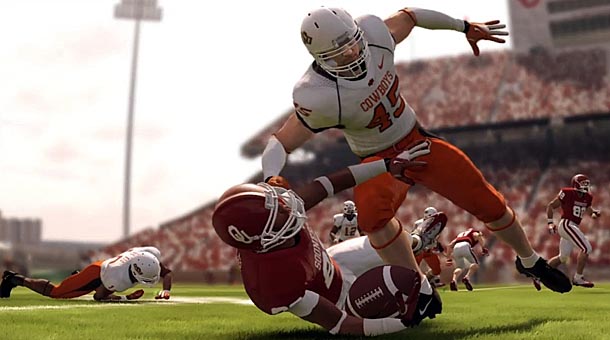 T-G: Let’s get into specifics- With USC being banned from Bowl Games for the next two years- has this been integrated into the game? What will happen if players try to take their Trojans to Pasadena?
BH: We do not include sanctions as a part of NCAA Football 12. If the Trojans have a good enough year, they can make it to Pasadena.

T-G: Speaking of NCAA regulations, beyond player names are there any of elements, which the NCAA has forced you to omit or retool?
BH: Being good partners with the NCAA, we abide by their wishes for how their product is represented in the game. If a topic is deemed too controversial and is not something the NCAA would like to have represented in the game we will always respect their wishes. 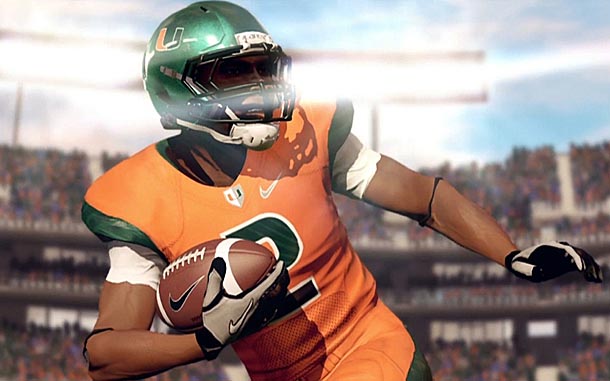 T-G: Have any current NCAA players got a hands on with the game? What have been the impressions so far?
BH: We had an event in New York to announce Mark Ingram as the cover athlete for NCAA Football 12. This event was packed with top draft picks and it was amazing to see how much fun these guys have playing the game. Guys like Julio Jones and Von Miller were playing all night long and having a blast. It’s very rewarding as a game developer to see the guys that actually play football enjoying the game you help create.

T-G: Looking underneath the hood, much is NCAA 12 modeling statically vs. relying on player input to decide?
BH: When you consider that during a play you are controlling one of twenty-two players, and when you are in Dynasty mode you are controlling one of one hundred and twenty schools it’s safe to say that a lot of what goes on in NCAA Football 12 is based on AI instead of just player input. Take a basic halfback dive run play for example. Since you are controlling the running back on this play we need to have animations in place for the QB to take the snap and hand off to the halfback, as well as logic for the nine other offensive players to know who to block based on both pre-snap reads and where the defenders move after the snap. 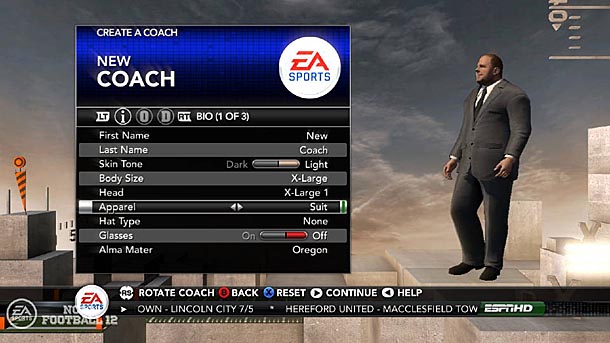 T-G: How deep does the simulation go? What’s the more obscure variable that the game includes?
BH: There are so many different things that get simulated in the game, especially in Dynasty mode, but I think one of the more obscure variables would have to be in the logic to determine dynamic attendance. The Dynamic Attendance feature allows for us to determine just how full a crowd should be for a Dynasty game based on a number of factors. Those factors include the ranks of the two teams involved, if the schools are rivals, the current win/loss streak for the schools, even going so far as tracking if the game is at night (i.e. higher attendance) and the average percentage of capacity for home games over the past five seasons. All of these go together to determine if the stands should be at 100% capacity or if a school is having a poor season and is playing a poor opponent if the capacity should be in the 20% range.

Tech-Gaming wishes to thank Mr. Haumiller for his time. Readers can expect our review of NCAA Football 12 on Monday, July 11th, 2011.