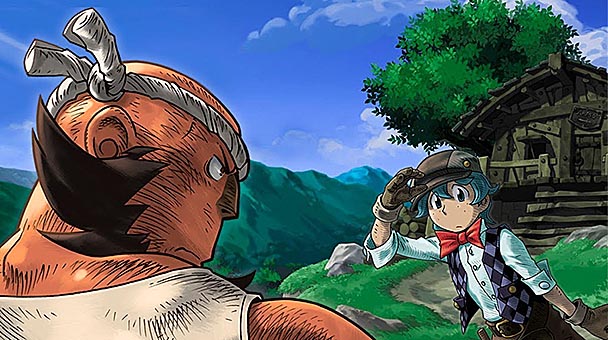 Level-5’s Guild01 was undoubtedly a curious concept, bundling a quartet of smaller games developed by Japanese gaming luminaries such as Goichi Suda, Yasumi Matsuno, and Yoot Saito. Whereas the compilation was released as a single cartridge overseas, stateside players were offered three of the four titles as eShop downloads. The sole straggler, Rentaru Bukiya de Omasse (Weapon Shop de Omasse) wasn’t given a solid assurance of localization- with many speculating on both the commercial feasibility of the game and the obligation to translate a mountain of text.

Following a protracted period of uncertainly, Level-5 has released the game onto Nintendo’s digital distribution platform, giving Guild completionists- as well as those that appreciate novelty, a reason to rejoice. Although the title may have taken longer than expected to reach the U.S., the game’s distinctive perspective, witty writing, and deft amalgam of genres should counterbalance any temporal transgressions. 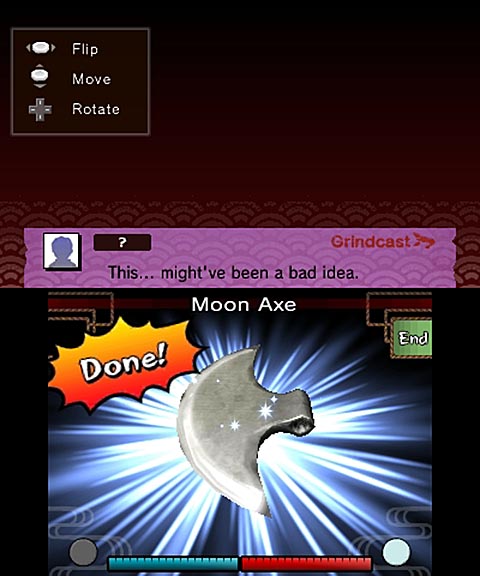 Much of Weapon Shop de Omasse‘s charm stems from the game’s comical context, which casts players as the apprentice at a prototypical role-playing shop. While the endless availability of goods is often taken for granted, Omasse pokes fun at this situation, encumbering players with the thankless duties of a virtual blacksmith. The game’s concise opening sets the stage for the premise, as an Evil Lord makes a reappearance- complete with a myriad of minions in tow. With this revisiting threat, the need for arms grows- as a growing procession of quirky heroes becomes determined to quash this unsettling menace. Unlike the characteristic vending system of most RPGs, Omasse’s owner hopes to maximize his profits by renting out each item. While it might seem a bit opportunistic, at least the proprietor has the decency to shun the sale of downloadable content.

After entering the weapon shop, each patron will give players a specific order, requesting items such as axes, shortswords, and spears to be crafted. The creation of these weapons is handed at the game’s forge, with players striking a searing piece of molten metal in time to a musical selection. Not only must gamers correctly match the cadence of a tune, they also must simultaneously chip away at excess metal and keep an eye on the item’s temperature. Success in each area improves the quality of the weapon, which in turn improves a hero’s chance for success. Should an adventurer fail due to faulty equipment, the weapon shop can’t collect payment, and becomes a bit more removed from smithing the ultimate weapon that’s capable of eradicating the Evil Lord. 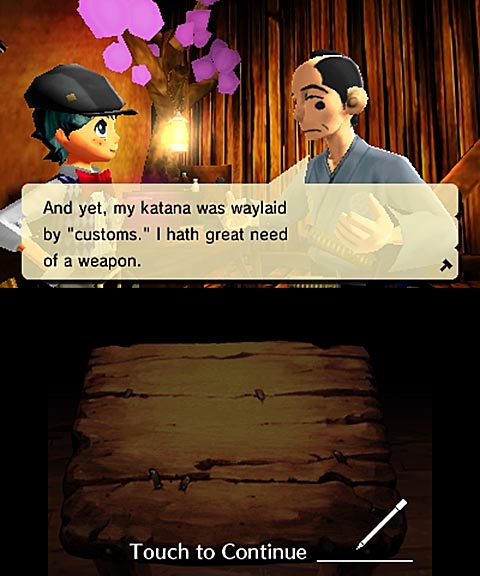 Although Omasse walks players through the first few forgings, soon autonomy is given, as the inflow of generic customers as well as reoccurring adventurers gradually increases. Beyond crafting, players will also have to manage inventory, and well as keep the shop’s catalog of weapons polished- all while a clock counts down the hours in each day. Like most titles with a time-management component, trivial blunders begin adding up, gently jarring the players’ sense of competence. Contributing to error-making is Weapon Shop’s tendency to interrupt players. Save for the forging and polishing, the game habitually disrupts your workflow to deliver dialog-driven cutscenes. Fortunately, getting into an irreversible jam is impossible; I made an embarrassing number of careless errors and still made it on top after an eleven-hour blacksmithing stint.

Although conversations might intrude, they contribute to Omasse’s puckish attitude. During your internship, you’ll get to know a number of regular customers, from a hapless samurai, a bullish Frenchmen, and a grandmother who had a hard time wrapping her head around has hashtag usage. Yes, Weapon Shop includes a Twitter-esque feed called the Grindcast, where characters skewer role-playing tropes and offer a bounty of videogame send-ups. Considering that the game was written by comedian and comic artist Yoshiyuki Hirai, it’s hardly surprisingly that the game’s dialog is habitually humorous- but players who don’t to read reams of text may get turned off. Expectedly, Level-5’s translation is spotless- while adapting wit can be difficult, the localization team did a commendable job. 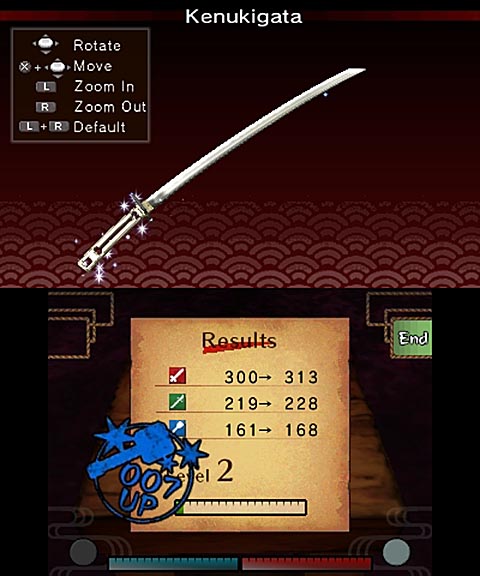 Aesthetically, Omasse is adept, divulging little of its pint-sized file format. Not only do characters demonstrate a variety of expressions, but the game’s armaments are drawn with detail. Each weapon category has its own song, from rousing anthems for axes to sweeping melodies for swords- the only problem is that the fidelity of the MIDI-driven music is rather middling. Most remarkable is the soundtrack’s inclusion of cheers, groans, and boos- lending the illusion of an unseen studio audience.

Although those seeking role-playing fundamentals might be disappointed by Weapon Shop de Omasse’s inclination toward time-management simulation, players craving creativity should appreciate the title’s spirited take on blacksmithing. Considering players should get at least ten hours of playtime out of the eight dollar title, a residency at the Weapon Shop gets a warm, but not quite red-hot recommendation. 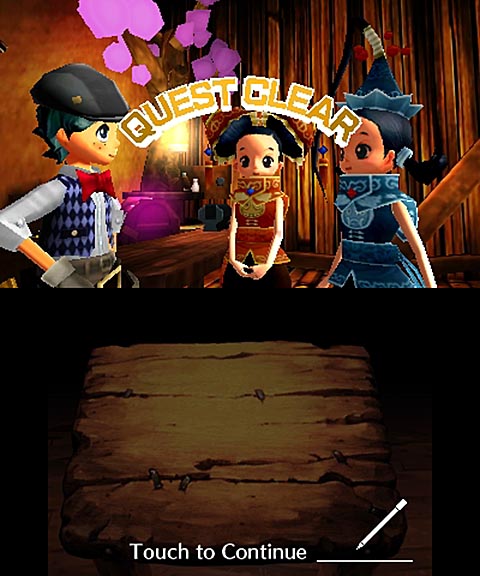 Weapon Shop de Omasse was played on the Nintendo 3DS with review code provided by the publisher.

Weapon Shop de Omasse Review
Level-5&rsquo;s Guild01 was undoubtedly a curious concept, bundling a quartet of smaller games developed by Japanese gaming luminaries such as Goichi Suda, Yasumi Matsuno, and Yoot Saito. Whereas the compilation was released as a single cartridge overseas, stateside players were offered three of the four titles as eShop downloads. The sole straggler, Rentaru Bukiya de Omasse (Weapon Shop de Omasse) wasn&rsquo;t given a solid assurance of localization- with many speculating on both the commercial feasibility of the game and the obligation to translate a mountain of text. Following a protracted period of uncertainly, Level-5 has released the game onto Nintendo&rsquo;s&hellip;