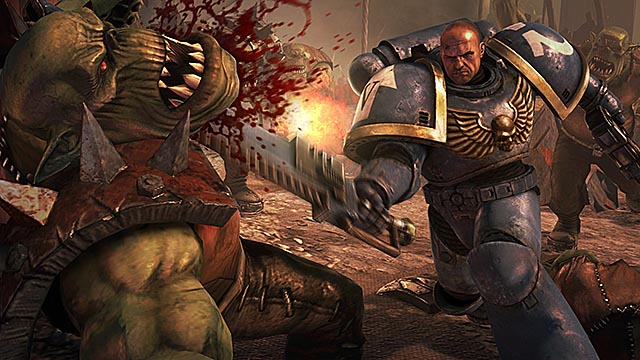 It’s been 24 years since Rick Priestley and Andy Chambers expanded the Warhammer universe into the 41st millennium. One of the things that drew me a 12-year-old SeanNOLA to the board game was the grim brutality of a universe filled to the brink with all the blood and gore a mother could ever hope to keep from her child. It’s hard to believe it’s taken this long for someone to create an action-oriented title in that universe. That’s not to say that this is my first digital space rodeo – there have been Warhammer 40k video games since before I ever got my grubby little fingers on and I’ve played them all, but none have done as great a job of capturing the raw power of a single Space Marine as Relic’s Warhammer 40,000: Space Marine.

Space Marine follows Titus, Captain of the Ultramarines’ Second Company as he and his meager squad storm an ancient Forgeworld to keep a Titan out of the hands of the invading Ork hordes. Are you lost yet? Don’t worry – the barrier to entry for non-Warhammer-nerds is pretty low; all you need to know is that you are a Space Marine, the Orks are bad, and if they get that giant robot, they can use it to stomp you to death (and that’s not good). The language used throughout the campaign never talks down to the player, but never assumes an encyclopedic knowledge of a Space Marine’s urinary tract (which is a much more interesting topic than one might think). However, if you are as personally invested in the mythos as, say me, there are literally hundreds of tiny details and easter eggs sprinkled throughout the game that create an undeniable sense of place. I felt connected to the world inside of a video game in a way I have never felt before, and that experience was awesome. 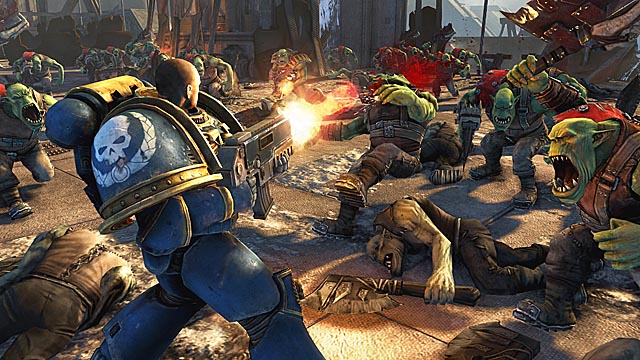 The setting does bring a few artistic questions to light in regards to the level design. A Forgeworld is essentially a baron waste planet that had been gutted by the Adeptus Mechanicus and turned into a giant weapons factory thousands of years ago. The result is that the interior sections of the game take place within a massive futuristic facility and evoke the grim, Vatican-meets-Robocop feel of the Imperium, wheras the exterior sections are just brown canyons filled with junk. The same brown canyons I’ve seen in a hundred other games at this point. I suppose the defense could be “what would you rather have the surface be like? A jungle? A ruined city? A <insert other trope here> ? I don’t know that I have an answer to that, but the shift between the unique subterranean chapels of the Adeptus Mechanicus and the bland mesas of the planet’s surface was palpable, and made me wonder why I ever poked my head above ground to begin with.

Strip Space Marine of its setting and rich history, and what you are left with is an extremely polished third-person action title. Comparisons to Gears of War are not unjust, but a tad bit narrow-minded. Space Marine borrows heavily from Gears but vastly improves upon its melee system, landing it somewhere in between Gears and Dynasty Warriors in my imaginary “Videogame Comparison Diagram.” The lack of a wall-sticking cover system will often nudge players to charge into battle, swords and axes swinging, rather than holding back and inching forward, one chest-high-wall at a time. Most combat scenarios are well planned enough to offer multiple solutions to each horde-busting problem, so if you prefer to stay back and pick Orks off one at a time with your Stalker Bolter, that option is open too, but I wouldn’t recommend it, since the melee combat is much more satisfying. 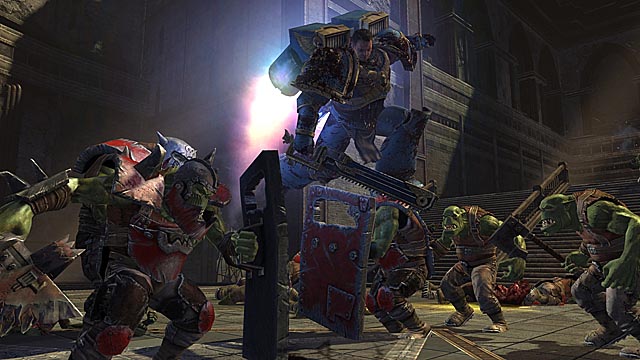 Close combat is a good mix of Dynasty Warriors-style hordes and aggression with Arkham Asylum’s strategy and pacing. Unlike DW, which sees you effortlessly wafting at hundreds of paper mannequins, each and every Ork poses a real threat to Captain Titus, and there are thousands of them. Jamming on the “attack” button will only get you so far, so it quickly becomes important to time your stunning attacks and executions to control the crowd and keep your health up. The heightened danger combines with the tight controls and primal violence to deliver an over-the-top melee system that rivals the best. Toward the end of the game, combat can seem repetitive, but at the end of the day, you’ll have felled dozens of hordes, each dozens strong, and each one will have presented its own unique challenges.

Multiplayer is fun, but somewhat meager. There are only 2 game modes, Seize Ground, which is essentially a capture-the-flag type game, and Annihilation, which is just a fancy word for “team deathmatch.” There will be a free, coop-based horde-mode released in October, but for now, we only have these two games to choose from. Both modes are faction based, pitting Space Marines against Chaos Space Marines, having each player choose one of 3 classes and joining a side. The smaller-than-CoD player pool nurtures a surprising pedigree of cooperative gamers, so (at least in the matches I played) the faction-based multiplayer worked swimmingly. I will admit though, I spent more time playing around with the character customizer than I did playing the actual game – I could make a Space Marine from almost any chapter I could think of! 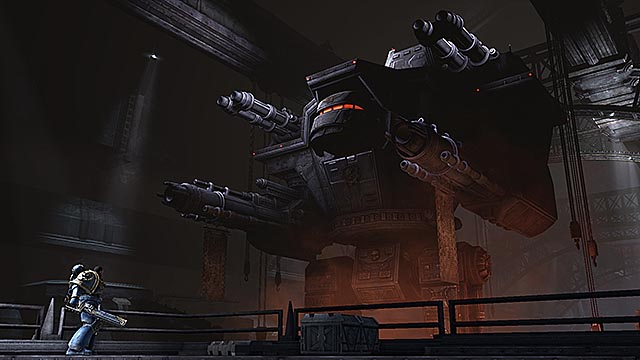 I have very little to complain about with Space Marine. I can’t think of a single other licensed game that has ever taken such loving care of its source material. I couldn’t even complain about the lack of my beloved Space Wolves, because they even managed to cram them in there (both as a playable faction in multiplayer, and in a less-than-subtle nod during the single-player campaign). I can’t wait to get my hands on the DLC next month, and I’ll be chomping at the bit when Space Marine 2: Electric Boogaloo hits shelves in the (hopefully not too distant) future.

NOLA’s note: At the time of this article’s posting, the PS3 version has some multiplayer issues. There is a bug that can keep players from finding a match, and drags matchmaking out for upwards of a half an hour, if you’re lucky enough not to lock up your system. Relic is planning to release a patch to fix it this week, but if PS3 is your lead console, and multiplayer is your prime purchasing bullet-point, then you might want to wait for the patch to hit.