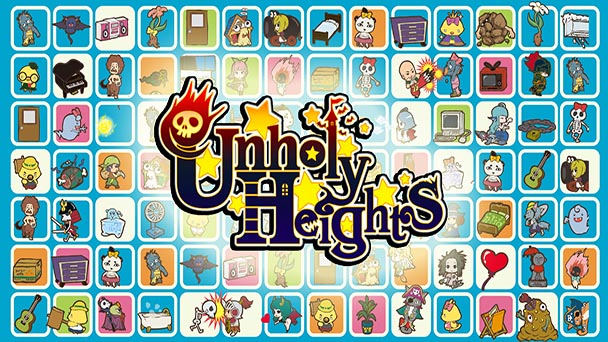 Seemingly bored from his role as a salaryman, the devil decides to become a manager at an apartment complex for monsters in Unholy Heights. Sure, it’s an unusual vocational shift, and it’s also the basis for an unexpectedly involving title that tasks players with mastering a myriad of moving parts. And while this whimsical blend of housing simulation and tower defense might not boost long-term appeal, there’s probably enough gameplay here to justify the six dollar asking price.

Initially, players are given a four-room hovel and a discretionary expense account of a thousand dollars. Beyond adjusting the rent for each apartment, players can also add a variety of upgrades- from air conditioners, heaters, beds, desks, and computers. These improvements aren’t cosmetic- players have to rely on text-based descriptions to find out what going on in each apartment. But in execution, they’re used to attract and appease different types of monster tenants. 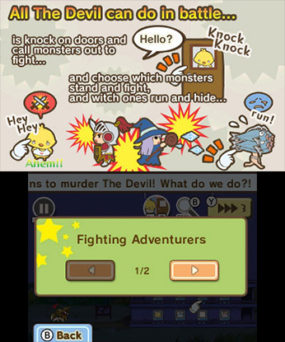 Each prospective renter belongs to a distinctive species. Cheepies are melee-adept creatures who resemble chicks, and their impression of the protagonist is influenced by their neighbors. Demi-humans, on the other hand, are ranged fighters- who begin to distrust the devil when people in the complex begin to die. Not only does each monster have idiosyncratic likes, dislikes and general attitudes, but they also make their move-in decision based on factors like the price of rent and the presence of any pampering amenities. And when they engage in combat, a nice nesting habitat allows for quicker healing.

Like any respectable housing manager, the first duty at hand is to fill any vacancies. After all, not being able to collect rent or having a monster militia able to repel intruders is a path toward stagnancy. So after potentially setting up some incentives, a procession of prospective occupants stops at the message board in front of your complex. If there’s interest, a button press completes the move-in lease, as the devil doesn’t waste his time with credit checks. And while there’s the occasional lodger who gets behind on his rent, evictions are handled just as easy, with a single tap sending the tenets packing. Occasionally, giving the boot serves a strategic angle, as sick residents can get their neighbors infected, or you just might want a little offensive diversity on your block. 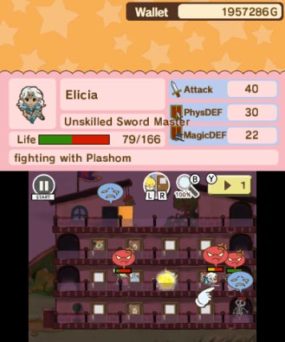 Gradually, you’ll develop a bustling housing complex with up to sixteen units, earning a regular fund of rent payments. Although only one monster can move in per apartment, creature can fall victim to Cupid’s arrow, falling in love and potentially bearing offspring. Not only does this benefit your apartment-based army, but children also tend to have better stats than their parents.

Progress through Unholy Heights is gated by combat-based quests, which typically task players from repelling waves of invading interlopers. Here, any monsters who aren’t working can be summoned by a rap on their front door, which instantly sends them honing in any trespassing horde. Mostly, it’s a hand-off approach, with players only having control of attack order. With minimal effort, you can distract a foe with hand-to-hand fighting, while a ranged unit peppers the unit with HP-robbing attacks. Elemental factors can improve or weaken the effectiveness of your team, but since you can’t swap any inhabitants on the fly, this becomes more a part of planning than actual execution. Occasionally, you’ll inadvertently eek of an underhanded victory, when your monsters come home from work during a battle, sandwiching a group of surprised enemies. 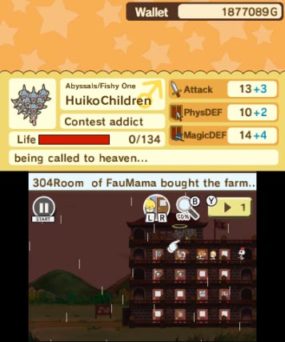 Pleasingly, if the invaders aren’t defeated, it’s not the end of the game. Let them escape off-screen and they’ll make off with a bit of currency, which usually isn’t too injurious. Instead, you’ll just have to scale back the ambitions of your questing, tackling missions with a lower-ranking, in an effort to rebuild your population. When quests are completed, the dividends are laudable, allowing the devil to expand his development or ushering in newer, tougher monsters as potential boarders.

With losing rather difficult, Unholy Heights chases an unorthodox style of challenge where the only struggle is advancement. Gone is the persistent push toward a game over screen, with success based on observation as well as the incorporation of measured risks. As such, Unholy Heights isn’t as stressful as most simulations, making it suited for players who prefer experimentation over nerve-wracking challenges where a single faulty decision begets failure. 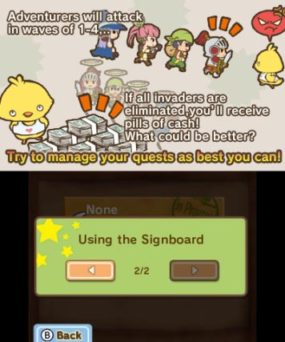 As a port of the PC iteration, Unholy Heights makes a natural fit on the 3DS, with the portable’s dual-screens divulging the necessary information players will need to succeed. Using either the stylus or using the directional pad to shift between highlighted items are both effective control methods, although the latter is tarnished by confirmations which aren’t emphasized. Musically, Unholy Heights boasts a number of tranquil tracks during management, while vocaloid-powered melodies fill the spectrum during fights.

Players seeking a laid-back, gratifyingly quirky game will appreciate Unholy Heights. While pleasing on PC, the title might even work better with the abbreviated sessions that accompany portable play. Although the title might lose a bit of its luster once you understand how it’s myriad of moving parts work together, it’s a diverting, devilishly good time for the first few hours.

Unholy Heights was played on the 3DS with review code provided by the publisher.

Unholy Heights
Platform: 3DS, Previously on PC
Developer: Mebius
Publisher: Bergsala Lightweight LLC
Release Date: June 23rd, 2016
Price: $6.00 via eShop
Unholy Heights review
Seemingly bored from his role as a salaryman, the devil decides to become a manager at an apartment complex for monsters in Unholy Heights. Sure, it&rsquo;s an unusual vocational shift, and it&rsquo;s also the basis for an unexpectedly involving title that tasks players with mastering a myriad of moving parts. And while this whimsical blend of housing simulation and tower defense might not boost long-term appeal, there&rsquo;s probably enough gameplay here to justify the six dollar asking price. Initially, players are given a four-room hovel and a discretionary expense account of a thousand dollars. Beyond adjusting the rent for each&hellip;

Summary : Unholy Heights is an imaginative, playful simulation that offers a pleasing dose of short-term fun. Hopefully, the devil takes on additional side-jobs.