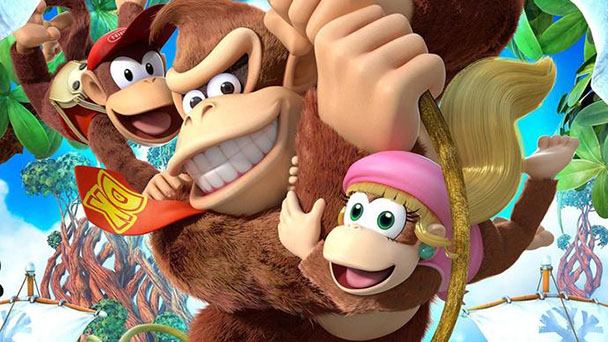 There seems to be a mounting consensus that the Wii U was a failure. It wasn’t. Sure, the console might not have lived up to the exceedingly lofty expectations set by its predecessor, but the hardware hosted a multitude of magnificent first- and second-party titles. And while an elevated level of difficultly might have been a point of contention, even detractors would acknowledge the quality of 2014’s Donkey Kong Country: Tropical Freeze.

The title was developed by Retro Studios with assistance from Monster Games, two external studios who have demonstrated the atypical ability to match the playability and polish of Nintendo’s own internal teams. Together, the studios crafted a side-scroller where controlling a member of the Kong clan conveyed both a sense of bulk as well as muscular agility, and exhibited consistently clever stage design. But undoubtedly, not everyone was able to appreciate the ingenuity of the game’s 63 stages, with latter level demanding consummate platforming skills. Fortunately, the release of Donkey Kong Country: Tropical Freeze for the Nintendo Switch remedies that issue, permitting the side-scroller’s entirety to be seen by those who might lack razor-sharp reflexes. 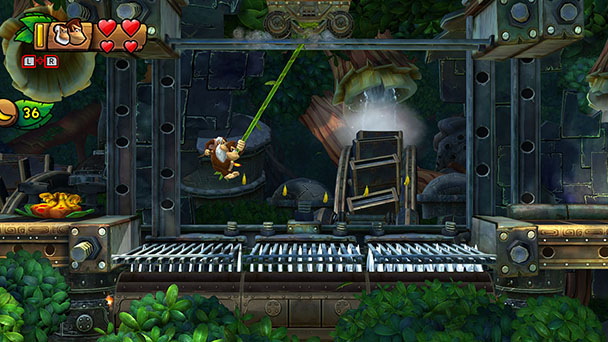 Insert the cartridge into your Switch or download the 6.6GB application, and you’ll immediately be presented with a critical decision. Initiate a save file with Original Mode and you’ll take controls of the same Kong members from the Wii U game. Donkey Kong will be your default character, and beyond being able to hoist his kin on his back, doesn’t impart any special abilities. Diddy, is smaller but also a bit faster, while Dixie extends a double-jump ability, and spin her pony tail like a helicopter rotor to slow her descent. And then there’s old Cranky, who’s cane allows him to pogo across hazardous areas, recalling Scrooge McDuck’s signature mechanic from DuckTales.

But opt for Funky Mode and Tropical Freeze becomes remarkably more accessible. Here, you seize control of the family’s jort, sunglasses, and bandana-clad simian, who lugs a surf board through mostly land-based environments. But auspiciously, the device comes in handy, allowing Funky to double jump, float, roll repeatedly, breath underwater, and scoot across bramble. Most importantly, he’s exceedingly robust, carrying a full five health hearts with him, instead of the traditional two. And while it might initially seem like Funky’s ability-set might break Tropical Freeze’s balance, it ends up making the game accessible for those who don’t have the dexterity of a deity. 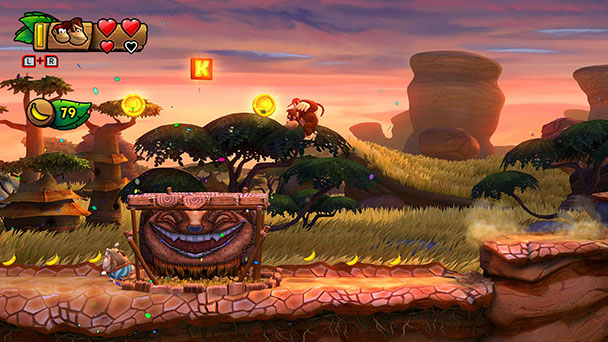 Each of the game’s seven worlds are punctuated by a boss battle. And unlike the perfunctory ‘bounce three times’ approach of most Mario Bros. games, Donkey Kong will make you work for the victory. The heavies here obey predictable patterns, but you’ll be forced to pay attention to every tell and seize every opening if you hope to beat them. And it’s during these events that Funky proved invaluable, with the addition extra heath offsetting any potential frustration. This is complicated by the ability to skip a level in Funky Mode. Perish persistently and the game permit you to move on, removing the type of obstruction that can make players give up on a game.

Undoubtedly, Tropical Freeze’s other merit is creativity flaunted by the game’s brilliant level design. After playing platformers for the better part of my life, I can usually sense where collectables are lurking, often wiping a stage clean the first time I run through it. But Retro loads each level with density, cramming secrets in alcoves, backdrops, and even within micro-games that occur in the middle of a level. One example: chase and grab every fruit left by a floating banana fairy, and you’ll might earn one of the elusive jigsaw puzzle pieces scattered in each level. 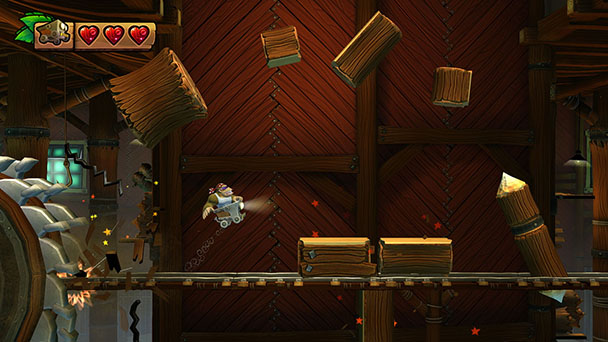 Unless you’re a side-scrolling savant, you’ll probably need multiple attempt to locate every puzzle piece, spell K-O-N-G, or establish a respectable speed-run time. Pleasingly, Tropical Freeze’s offers assistance for some of these ambitions. Trading in the gold banana coins to that appear in each level can earn consumables like extra lives, saves when you run out of air, or fall off-screen, or take damage when mine carting or rocket barreling. Personally, I found Squawks one of the most helpful tools. For a few coins, the parrot will appear on the lower left corner of the screen, growing excited when a puzzle piece is near.

And while journeying through Tropical Freeze’s stages is mostly a joy, thanks to variety of mechanics and milieu, there are a few stages that demand perfectionism from players. One late-game rocket-barrel stage seems designed by an unrepentant sadist, and will undoubted exasperate players. But that’s an outlier in an otherwise well-crafted journey, that’s intensified by visual beauty. Running at 60 frames-per-second almost all the time, Tropical Freeze is brimming with bright color and well-drawn obstacles. Likewise, playable protagonists and enemies extend personality with small details like animation routines divulging character details. Undoubtedly, on the game’s more attention-grabbing elements is the use of HD rumble, which delivers an assortment of buzzes and jolts to complement the on-screen action. 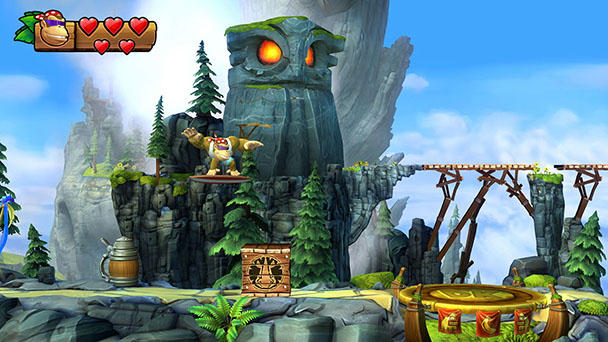 While it’s a bit tragic that the Wii U didn’t have a chance to capitalize on it’s potential, the spirit of the system lives on when players are given top-notch ports like Donkey Kong Country: Tropical Freeze. If you missed the original release, or just couldn’t come to grips with its high difficulty level, Tropical Freeze deserves your attention. It’s yet another Nintendo-published platformer that stands as one of the genre’s best efforts, especially with the changes introduced with this iteration.

Donkey Kong Country: Tropical Freeze was played on
Switch with review code provided by the publisher.

Donkey Kong Country: Tropical Freeze
Platform: Switch, previously on Wii U
Developer: Retro Studios, Monster Games
Publisher: Nintendo
Release date: May 4th, 2018
Price: $59.99 physical or digital via Nintendo eShop
Donkey Kong Country: Tropical Freeze (Switch) review
There seems to be a mounting consensus that the Wii U was a failure. It wasn&rsquo;t. Sure, the console might not have lived up to the exceedingly lofty expectations set by its predecessor, but the hardware hosted a multitude of magnificent first- and second-party titles. And while an elevated level of difficultly might have been a point of contention, even detractors would acknowledge the quality of 2014&rsquo;s Donkey Kong Country: Tropical Freeze. The title was developed by Retro Studios with assistance from Monster Games, two external studios who have demonstrated the atypical ability to match the playability and polish of&hellip;

Summary : One of the Wii U’s best platformers comes to Switch with some small, but much needed changes. While it’s still no pushover, Donkey Kong Country: Tropical Freeze is more accessible, bringing its adept level design to Nintendo’s hybrid.