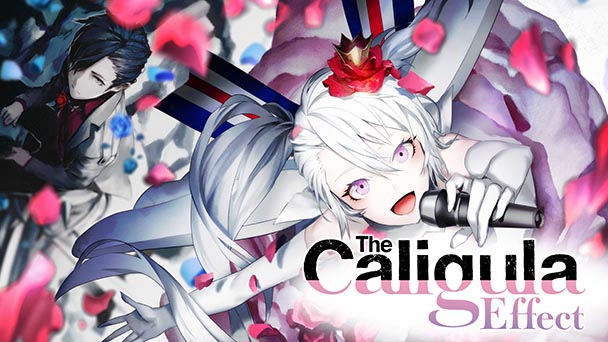 Japanese role-playing aficionados know that allegory is a frequent storytelling strategy. Whether it’s Hyperdimension Neptunia’s spirted take on game console competition or the Persona series’ ruminations about our inner psyches, there’s something rather potent about the technique. Pleasingly, the recent release of The Caligula Effect for the PS Vita continues that trend, offering a metaphoric intermingling of vocaloids, an exploration of ordeal and restoration, as well as a warning of the dangers of escapism. And while it can sporadically feel as convoluted as that description sounds, it’s also a delightfully distinctive and thoroughly brainy experience.

Genre tradition means that RPG prologues are usually verbose, slow-moving affairs that front-load exposition. Yet, The Caligula Effect shirks convention, with an opening that’s concise, but also a bit confusing. As a portable title, there’s a possibility that The Caligula Effect will be started on a train or bus, amidst a wealth of distractions. As such, you’d do doing yourself a favor by playing the first hour in isolation, absorbing every detail articulated during the introduction. 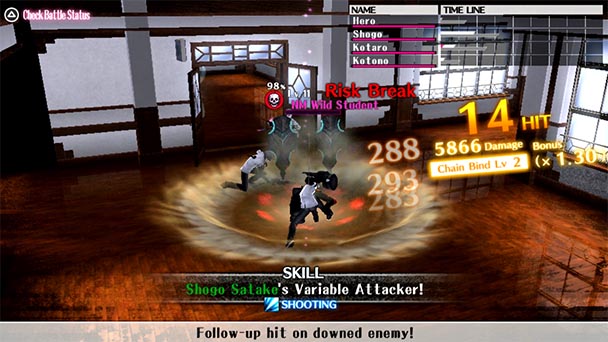 Alternating between traditional animation and the use of in-game assets, Caligula’s cutscenes tell of a nameable protagonist, invited to speak for a school ceremony. While concluding his oration, the lead notices that the faces of many audience members have a multi-hued, pixelated appearance, resembling the type of graphical glitching exhibited by a dying video card. Startled by the vision, he hastily flees the ceremony, learning that the phenomenon signified that his consciousness wasn’t rooted in the real-world, but rather an artificial one known as Mobius.

Like Plato’s “Allegory of the Cave” (or The Matrix), the lead is able to see ‘reality’, while all the rest of his classmates see is a mediated, watered-down copy of it. Interestingly, we soon learn that Mobius wasn’t built from ill intentions, but rather from a vocaloid named µ (or ‘Mu’), who was spurred to create an idyllic, illusional high-school setting after enduring a barrage of heartbreaking songs. Like the artificial intelligence in Psycho-Pass: Mandatory Happiness, Mu idealistically wants contentment for humans, teaming up with another being named Aria to construct the contrived context. However, a number of events has Aria convinced that Mu is delusional and must be stopped. 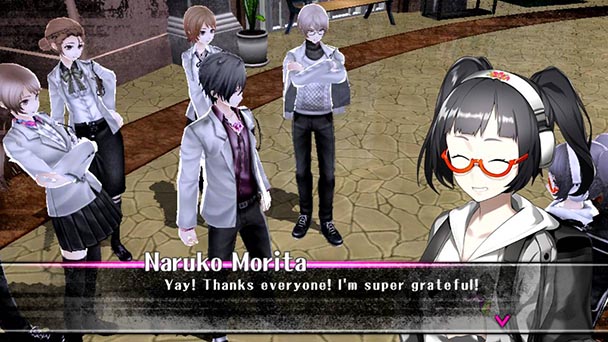 Naturally, a healthy amount of opposition stands in the way of completing this endeavor. Like Plato’s work, some of those living in the ersatz realm feel threatened by the enlightened ones, with dislike transforming the students into a faction known as Digiheads. And with Mu going into hiding, the only way to find the vocaloid-gone-rogue is through a group known as the Ostinato Musicians, who are scattered throughout Mobius.

Fortunately, you have a number of advantages of your own. Players don’t have to work as individuals, and will soon find like-minded co-conspirators referred to as the “Going Home Club”, who will fight alongside you. The Catharsis Effect endows characters with offensive capabilities, allowing for students to transform their bodies, having appendages function like firearms, for instance. Recalling the Confidant system of Persona 5 (or the Social Links from the two previous iterations), players can swell their Causality Link, building rapport with over 500 different schoolmates. 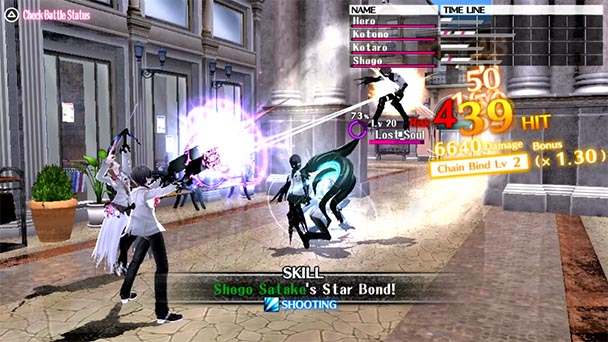 Undeniably, The Caligula Effect’s battle system is going to find favor with gamers, thanks to its divergence from combat convention. Essentially, players are able to choose from over a hundred different attacks, with only the burden of a SP pool introducing any kind of constraint.  When conflict emerges, players are able to preview each attack, assessing the type of damage and impact you’ll have against opponents. Once a combo is in place and you send an opponent airborne, you can layer on the punishments of other party members, adding exponential amount of damage. It’s especially satisfying to wipe out opponents in a single sweep before they can retaliate, which happens regularly on Caligula’s lower difficulty setting.

That’s not to say, that combat isn’t without issue. Against tougher teams and bosses, it can be a thorny but satisfying undertaking. But when you’re taking on lesser trash mobs, encounters can take a little too long. But even more vexing is the game’s camera, which tends to place party members behind walls and lump groups of foes and friendlies together, making target selection rather difficult. Encounters habitually bring down the game’s framerate, and while it doesn’t really affect playability, it can undermine the title’s visual delivery. 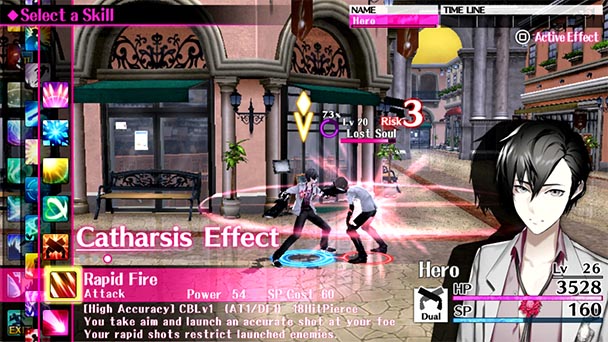 Surely, the idea of Caligula’s Causality system is a remarkable concept, but doesn’t truly deliver on its promise. Delve into the component and you’ll uncover depth, with characters positioned into multiple degrees of separation. Once you meet them, you can develop affinity that augments your stats and even message them on the game’s version of LINE. But all too often, socialization is unfulfilling, with similar, vapid quips offered by your classmates. On the other side of the spectrum are the backstories of the Going Home Club members, which reveal a number of surprisingly poignant, detailing the myriad of motivations for escapism. Here, Caligula tackles some tough issues, but does with tact and insight.

Graphically, the title can feel a bit disjointed. Occasionally, the game extends gorgeous portrait art or a visual flourish destined to delight the retinas. But other moments, Caligula attempts to get by with drab textures and polygon counts that shouldn’t tax the Vita hardware. Fortunatly, the game’s audio is a different story, with each Ostinato Musicians offering their own song. Then when the title shifts into battle, a vocal track is layered on, emphasizing the encounter. While the localization is functional, at times the dialog can feel a bit dry, as if the team favored a direct translation. 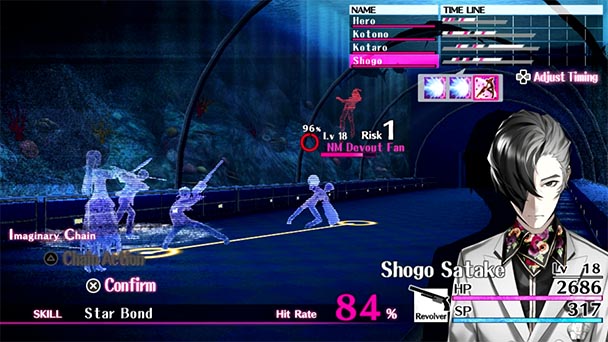 The Caligula Effect is a game of lofty ambition, both in plot and execution. Although it doesn’t exude polish across each of its components, it’s difficult to fault the developer’s determinations, especially for a portable-based title. For players seeking a PS Vita-based role-playing game that pushes the envelope, Caligula comes recommended.

The Caligula Effect was played on the PS Vita with review code provided by the publisher.

The Caligula Effect
Platform: PS Vita
Developer: Aquria
Publisher: Atlus
Release date: May 2nd, 2017
Launch Price: $39.99 via retail and PSN
The Caligula Effect review
Japanese role-playing aficionados know that allegory is a frequent storytelling strategy. Whether it&rsquo;s Hyperdimension Neptunia&rsquo;s spirted take on game console competition or the Persona series&rsquo; ruminations about our inner psyches, there&rsquo;s something rather potent about the technique. Pleasingly, the recent release of The Caligula Effect for the PS Vita continues that trend, offering a metaphoric intermingling of vocaloids, an exploration of ordeal and restoration, as well as a warning of the dangers of escapism. And while it can sporadically feel as convoluted as that description sounds, it&rsquo;s also a delightfully distinctive and thoroughly brainy experience. Genre tradition means that RPG&hellip;

Summary : Now without flaw, The Caligula Effect is worth a purchase for its cerebral storyline, unique battle system, and willingness to tweak role-playing tenet.