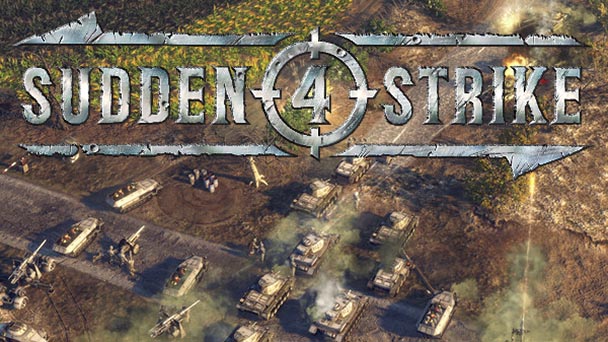 Occasionally, a franchise can lose track of the elements that once secured success. Such was the case with 2008’s Sudden Strike 3. Developer Fireglow’s follow-up retained many of the positive qualities of its predecessors, relinquishing command of colossal amounts of land, air, and sea-based units. But in execution, selecting and directing units through an obstinate user interface siphoned some of the enjoyment from the proceedings. Now, nearly a decade later, Budapest-based Kite Games has seized control of the series, hoping to secure an affirmative direction for the World War II-era, real-time tactics franchise with Sudden Strike 4.

Boot up the 5.2 GB download and you’ll be ushered into a main menu that offers a tutorial, twenty-five I wmissions spread across the Allied, German, and Soviet campaigns, as well as a skirmish mode that accommodates multiplayer matches. Even if you’re well acquainted with the real-time tactics genre, it would be prudent to take the game’s succinct introductory lesson, less you might miss details like being able to pop open the hatch of your tank to increase the range of your visual perception. Unfortunately, the game’s tutorial is a little too barebones, covering the basics of unit command, while overlooking Doctrines, one of the fundamental new features of the fourth entry. To a lesser extent, the voice acting is off-putting, with East Coast American English spoken by the Germans. However, during campaign missions, players are treated to much more authentic, linguistically appropriate sound bites. 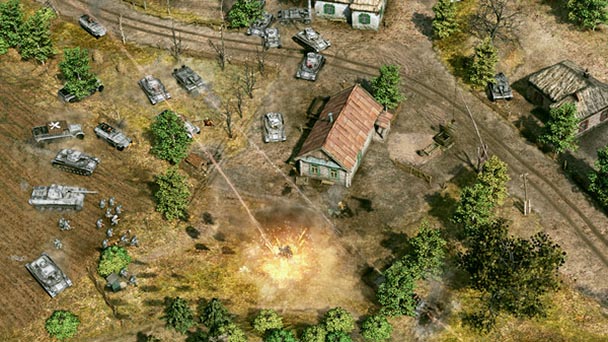 Jump into one of the games missions and you’ll soon discover Sudden Strike’s divergence from most real-time strategy titles. Streamlining conflict, the game shirks traditions like resource collection and building an infrastructure. Instead, you’ve given limited quantities of troops and machinery and must make the most out of the allocation. One potential tide-turning advantage is the ability to sporadically re-appropriate enemy machinery and structures. If resources aren’t completely destroyed, ordering a few infantrymen to seize the war asset can be advantageous.

Improving on its predecessor, directing units in Sudden Strike 4 is largely intuitive. Naturally, players can click on a soldier or vehicle, with another button press trigger a movement or an attack. Likewise, unit groups follow tradition, with a simultaneous press of the control key and a number designating a squad, while a number key alone selects a previously assignment group. Nicely, Sudden Strike 4 displays a numerical icon on units, allowing for easy identification and deployment. Given the sheer number of units on a battlefield, the ability to freeze time and issue commands as needed is a blessing. 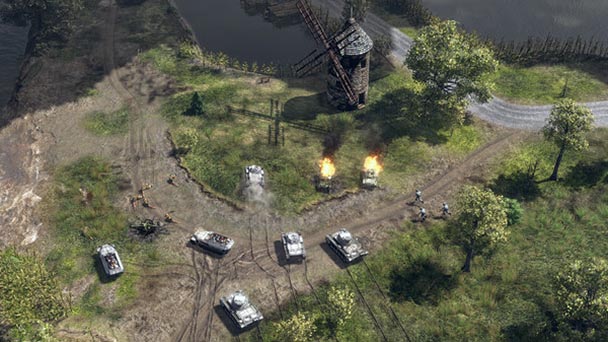 On the downside, unit autonomy can be a lackluster. Largely, battalions need their waypoint micromanaged to take advantage of the numerous opportunities for cover and the element of a surprise attack. And while Sudden Strike 4 allows for the rotation of a unit group, there’s little control over formations without constant fiddling. Sure, there’s some troop independence in the game. Move a repair truck adjacent to a tank with a broken track and a repair person will get to work. But all too often, I see medics standing around while a soldier bleeds out nearby. Other issue stems from the game’s perspective. While Sudden Strike does allow players to change camera height, don’t expect to be able to zoom out for a god-like point-of-view. Since Sudden Strike monitors stats like fuel and ammo levels, it can be exasperating to have a vehicle waste ammunition on a target it’s consistently missing, requiring intervention on the player’s part.

For better or worse, enemy artificial intelligence matches the aptitude of your own army. It’s not uncommon for opponents under fire to launch flares into the sky, but reinforcements rarely come. Although tactics like flanking a tank and firing at its rear offer a strategic advantage, you’ll rarely see foes trying to gain the upper hand with these techniques. All too often the CPU is lying in wait, defending itself when players attack. Offensive attacks and adaptive intelligence is all too rare, making Sudden Strike 4 feel like a giant puzzle rather than fluid and dangerous. As such success on each mission stem more from prudent play that mitigates risk, limiting the amount of enjoyment for replay. 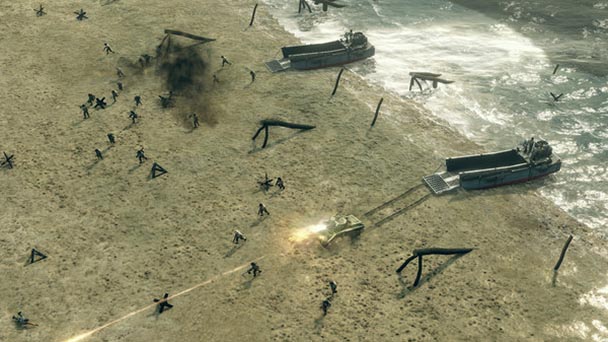 Which is a bit of shame because Sudden Strike 4’s Doctrines system seems built around the idea of revisiting levels. Here, players select from a trio of specializations (infantry, tank, or support), each with its own general and specialized tech-tree. Success of each stage earns up to three stars which are used to unlock additional perks, offering an incentive. But the system is based around the completion of certain in-game tasks, and Sudden Strike isn’t very forthcoming about your progress, undermining its own motivational system. As such, I worked my way through the campaign concisely earning a pair of stars on each stage, finding little need for an extra assistance.

Sudden Strike 4 chases historical verisimilitude with its units and broad contexts, only occasionally converging on historical fact. As such, you’ll find broad facsimiles of the Siege of Leningrad, Operation Market Garden, or Operation Overlord, even if many of the details are fictionalized. This means that Sudden Strike offers up some iconic battles, with Leningrad’s icy arena offering intensity as tanks can plummet into the frosty abyss or The Battle of Kursk offering the ultimate armored showdown. While it’s forgivable that the game takes some historical liberties, some of the tactical oversights were less defensible. Following standard military protocol, I used my tanks to shield a group on infantry. But Sudden Strike didn’t seem to model ballistics, and enemy were able to shoot right throw my tanks. 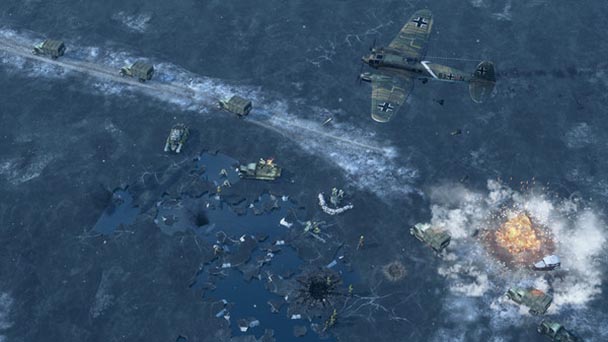 Mechanical quibbles aside, Sudden Strike 4 is a consummate looker. Units exhibit a pleasing amount of detail, flaunting soldiers riding in the back of a troop transport or the working tracks of a tank. Explosions and flames are handled agreeably, often sending bodies flailing through the air and lingering billows of somber smoke. Nicely, many elements of the battlefield are destructible, and it’s difficult to not get excited to see a squad of Shermans barely slowing as they smash through a tree line.

While Sudden Strike 4 has a host of enjoyable moments, a multitude of minor issues can spoil the game’s sense of impact. As such, there’s a persistent reminder that you are playing a game rather than being a participant in a detailed simulation of war. As much as I’d love to immerse myself in the intricacies of strategic command, all too often I’d experience the frustration when a tank’s machine gunner fails to target a foot soldier just a stone’s throw away. Perhaps a copious amount of patching can turn Sudden Strike into the war-ready machine it wants to be. 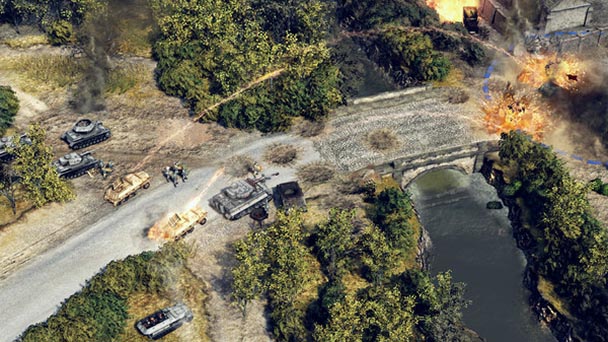 Sudden Strike 4 was played on PC with review code provided by the publisher.

Sudden Strike 4
Platform: PC, also on PS4, coming soon to Xbox One
Developer: Kite Games
Publisher: Kalypso Media Digital
Release date: August 11th, 2017 (PC), August 15th, 2017 (PS4)
Price: $49.99 via Steam (PC), $59.99 on console via retail and digital download
Sudden Strike 4 review
Occasionally, a franchise can lose track of the elements that once secured success. Such was the case with 2008&rsquo;s Sudden Strike 3. Developer Fireglow&rsquo;s follow-up retained many of the positive qualities of its predecessors, relinquishing command of colossal amounts of land, air, and sea-based units. But in execution, selecting and directing units through an obstinate user interface siphoned some of the enjoyment from the proceedings. Now, nearly a decade later, Budapest-based Kite Games has seized control of the series, hoping to secure an affirmative direction for the World War II-era, real-time tactics franchise with Sudden Strike 4. Boot up the&hellip;

Summary : It’s been said war is hell, but here it’s more of a test of tolerance. There’s a solid game at Sudden Strike 4’s core, but lackluster, unresponsive AI means that it’s concealed better than a platoon of prone soldiers in a reed-filled meadow.