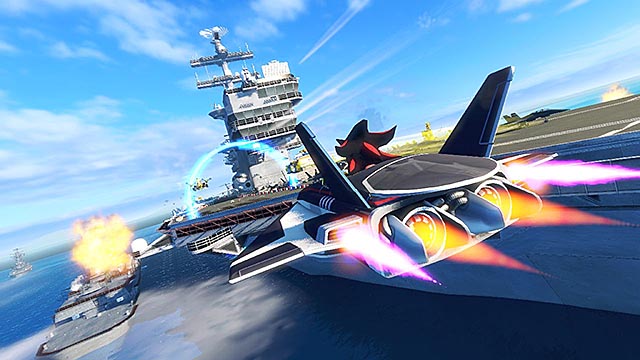 Since the release of Super Mario Kart on the SNES in 1992, low-slung, tightly cornering vehicles have captivated gamers for over two decades. Remarkably, the genre shows little indication of slowing down, fueled by holiday entries such as LittleBigPlanet Karting and F1 Race Stars. Competing advantageously against these efforts is Sonic & All-Stars Racing Transformed- a recent release for the Xbox 360, PlayStation 3, and Wii U consoles, with adaptations across PCs, PS Vitas and iOS devices. 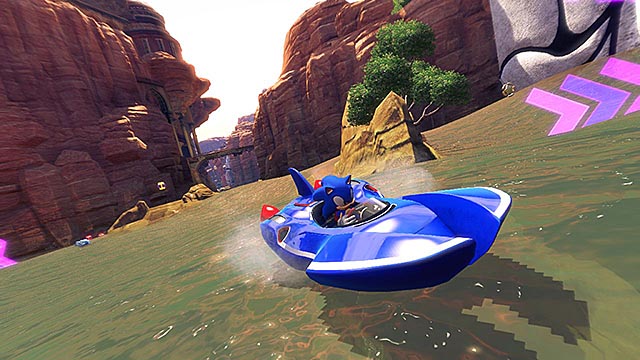 Admittedly, the game’s core hook might seem a bit gimmicky. Unlike the predecessor which followed formula obediently, Transformed’s vehicles shift between ground, air and water racing forms- offering an accompanying sound effect right out of Michael Bay’s sonic palette. In execution, these mutable racers endow the title with an agreeable dose of variety. Noticeably, flying recalls Pilotwings’ fixed-wing forays while aquatic sprints recall the wave physics and measured maneuverability of Hydro Thunder. To prohibit the game’s circuit-based battles from growing stagnant, course routes change with each lap. Often players will fly over a leg of the track that they’re previously traversed on tarmac. Intermittently, observant gamers are able to choose their own forms, as the game extends its blue transforming rings on the course periphery.

Consistently, the title’s track designs are inspired, offering evocative venues which make for enjoyable matches. One highlight: an Afterburner-inspired level where racers career around the deck of an aircraft carrier, making a hairpin turn around the bridge, before taking flight through a fleet full of battleships. Other courses demonstrate a keen balance between full-throttle bliss and occasional caution, with just enough barrier-less curves to keep players alert. Infrequently, the developers’ ambitions outweigh the obligation of playtesting. The intermittent ramp landing or airbourne obstacle can leave players at an unmanageable angle while vehicles which veer over an edge routinely respawn multiple times before finding a solid restarting position. 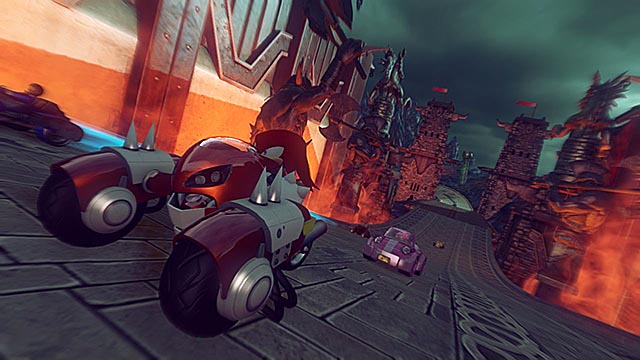 Beyond the game’s elaborate levels, the contributions of Bizarre and Black Rock’s developers are also evident once gamers begin exploiting Transformed’s taut drift mechanic. Following genre convention, a tap of the break button sends a vehicle’s posterior into a controlled skid. If players hold the slide long enough they’re rewarded with a bit of boost. Shrewdly, this speed increase is consummate with the duration of the drift, goading racers into risky behavior. Soon, adept gamers will get into the habit of scanning tracks, looking for telltale bends that submit the ability to slingshot past their competitors.

Wisely, Transformed weapons don’t dogmatically duplicate the offensive devices that have propelled the Mario Kart franchise. While straight-ahead and guided shot options exist, the title has a few distinctive devices of its own. Most notable is the Hot Rod, a three-staged speed boost which expels a ring of destructive conflagration after use. Yet, if players fail to initiate a timely detonation, the power-up can backfire, bringing the vehicle to an abrupt halt. While the management of offensive (and defensive) tools is important in Sonic & All-Stars Racing Transformed, racing and stunting are just as crucial, endowing the game with a solid sense of balance. 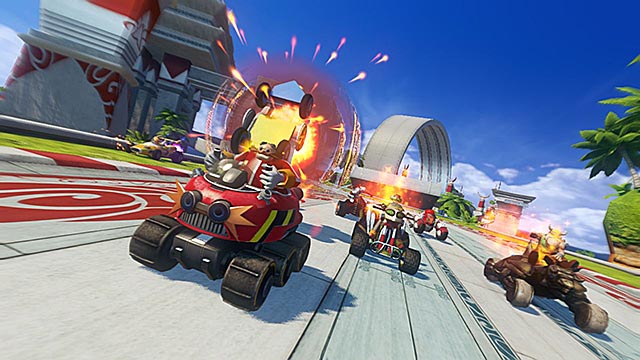 The game’s career mode does of admirable job of keeping the action diversified. Beyond basic circuit races, there are time-based challenges, elimination matches and even a variation which task players with maneuvering through heavy traffic or destroying a menacing tank.  Online, ten players races were habitually lag-free, matchmaking one of the contest took a little long, as the community is still rather diminutive. The Wii U iteration allows up to five players to participate locally and agreeably, the developers allow almost any conceivable control method, from basic Wiimotes, Classic Pro Controllers, Nunchuck enhanced, to the new Pro Controller.

Visually, the Wii U version retains parity with the 360 and PS3 version. Typically, the game manages to manipulate a massive amount of on-screen geometry around at thirty-frames per second, but the occasional stutter and exhibition of slowdown does occur. Wii U owners can opt to control their vehicle with the GamePad, or optionally use the second screen as an overhead course map, rear view mirror or weapon cam. One interesting niggle: when playing Transformed on the GamePad, a few telltale signs of video compression are evident, which a bit of fuzziness around the game’s edges. 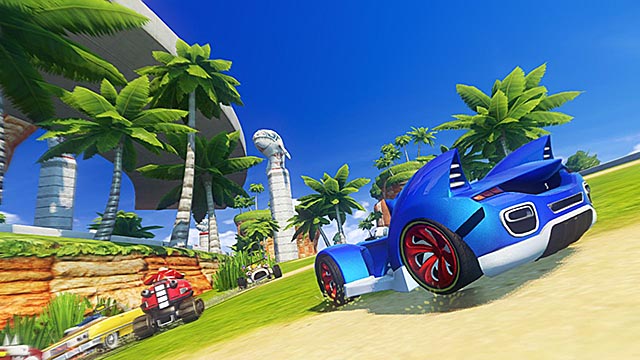 For SEGA loyalists and kart racing aficionados, Sonic & All-Stars Racing Transformed is undoubtedly a must have title. With an inclusive collection of the publisher’s characters and settings, as well as a soundtrack of deft remixes, those acquainted with monikers such as Gilius Thunderhead and Joe Musashi will likely be elated to see the game’s synthesis of luminaries. Yet, even players unfamiliar with SEGA lore should appreciate the title’s refined mechanics and interpretation of the genre.  Considering the game’s reduced $39.99 MSRP, Transformed would make a welcome addition of any karting enthusiast’s library.