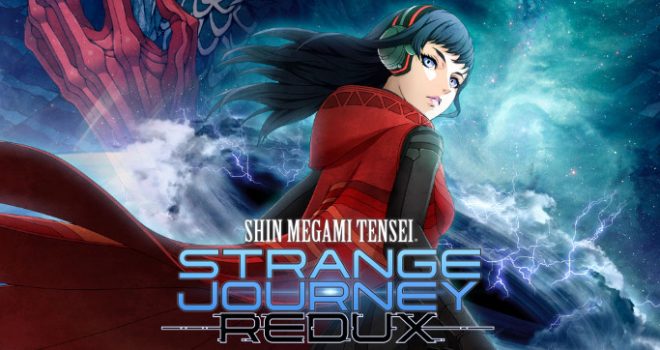 While not a complete misnomer, Strange Journey Redux isn’t really all that strange. Sure, Megami Tensei fans who missed the original 2009 DS release might perceive a few peculiar divergences. Most notable is the game’s shift away from a teenage cast, a tradition put into place since the debut of 1987’s Digital Devil Story: Megami Tensei, and carried on through the popular Persona spin-offs. Instead of students in an urban setting, Strange Journey Redux envisages a group of soldiers and scientists stationed in a remote context.

The “strange journey” refers to an expedition initiated by a multi-national coalition to explore a mysterious situation near the southern ice cap. Not unlike a breach in the ozone layer, an ever-expanding black hole is spreading at an alarming rate and threatening to overtake the Earth. Players assume the role of a courageous crewman as they set off to investigate the source of the enigmatic phenomenon known as the Schwatzwelt (German for “Black World”). 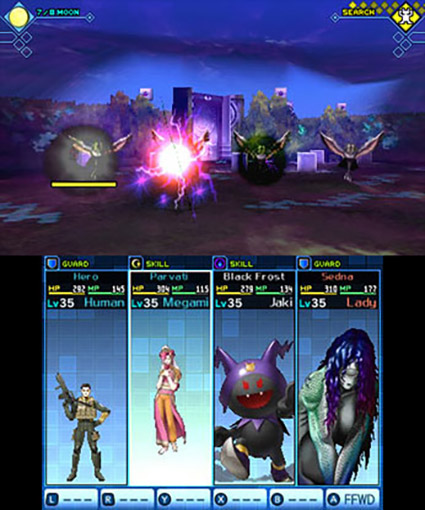 Probing the singularity unearths a trio of qualities MegaTen enthusiasts should be familiar with. From absorbing dungeons that beg for exploration, a combat system that is detailed enough to satisfy tactically-minded platers, and a healthy roster of demons to fight, persuade, recruit, and even breed, Strange Journey covers nearly all the essentials. Since it’s a standalone title, there’s no requirement for lore or understanding how mechanics work, making it accessible to a wide swath of audiences.

The game’s exploratory vessel, The Red Sprite, serves as the base of operations for the game. From an capable menu system, gamers can access the different sections of the ship, purchase and research items at the craft’s laboratory, heal parties in the sick bay, or move the story along in the craft’s command room. Each location of the vessel hosts multiple crew members, who impart helpful mission guidance and gently augment Strange Journey’s story. 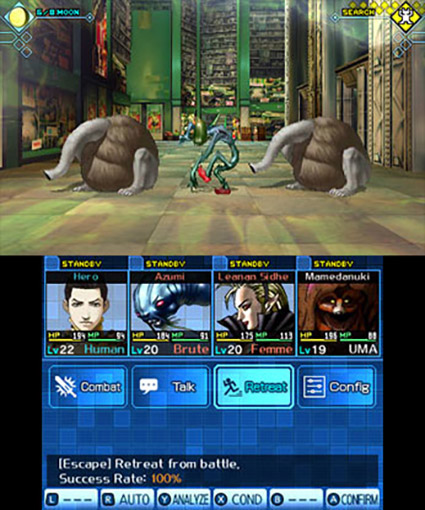 Once players abandon the sheltered confines of the Red Sprite, they may find that the title’s dungeon exploration recalls the look and feel of Atlus’ Etrian Odyssey franchise. Players who were intimidated by that game’s cartography will be relieved to know that Strange Journey normally presents an undemanding auto-mapping element, allowing gamers to concentrate on the more pressing components of the complex labyrinths, such as concealed doors, occasional traps, and waterways that push the players to other parts of the dungeon. Occasionally, gamers will be forced to navigate through unlit territories that lack any visual or mapping orientation. Mostly, these sections are just brief enough as to not instigate too much frustration but challenging enough to impart a sense of relief when they are completed. But there are some instances where annoyance may emerge.

Beyond the automapping ability, players are also equipped with a robust Demonica suit, which becomes more powerful as the story develops. Initially, demons wandering the dungeons are displayed as clouds of static. As gamers endure, the suit gathers data on each otherworldly creature, culminating in a strategic advantage as gamers establish each opponent’s strengths, weaknesses, and special abilities. In keeping with Megami Tensei convention, not all demons are adversarial. Some can be recruited into the player’s party with a bit of coaxing, while others require some currency before being conscripted. Others may be resistant to join an exploration team based on the player’s alignment. 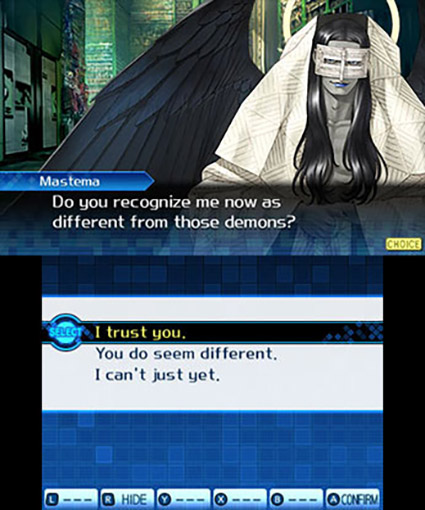 Yes, that means Strange Journey traces a gamer’s decisions in the game, placing them in chaotic, lawful, or neutral categories. Like any respectable role-playing game, valiant decisions don’t always pigeonhole players into easily identifiable groupings- classifications are based of views of control, power, and lawfulness rather that simple diametrical views of good or evil.

Two minor details prohibit Strange Journey from reach the topmost echelons of RPG virtue. First, the game can be a bit vague at times, sending players into dungeons without a precise objective. This means there can be the occasional sense of frustration until players stumble upon an obscured trigger point. Visuals can get recycled a bit too much in the game, depriving dungeons from having distinct visual cues, obliging navigation through via the mini-map. 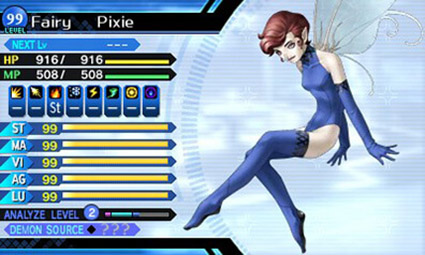 And while Redux notable improves the fidelity of the original release, and adds Japanese audio, there are still some rare instances where the absence of visuals can make things difficult. Two sections, built around invisible objects and teleportation areas, were particularly maddening. Having played the original Strange Journey, I was hoping that Atlus would revise these sections.

But there’s also a lot of improvements to Redux. For those up for an unmitigated challenge, you can now opt for the Expert difficulty level, while players hoping for a more relaxed experience can select Normal or even the Casual setting. When the original Strange Journey was released passwords were in vogue, and mercifully, Redux allows you to use any to acquire some powerful demons. 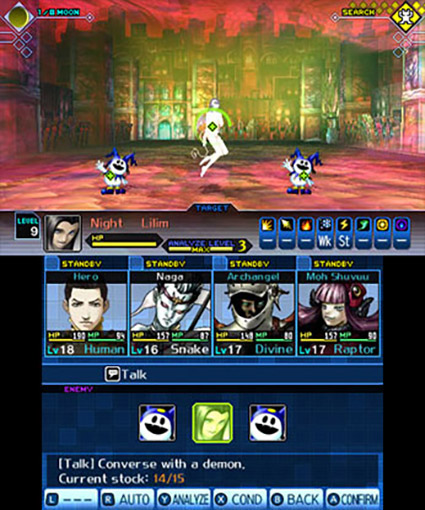 Pleasingly, there’s a healthy amount of changes and additions to in-game content as well. Beyond a new route that extends a trio of new endings, there’s the addition of a new character named Alex. She’s a force of nature to be reckoned with, hell-bent of killing the player as soon as she’s introduced. Her motives and motivations are immediately disclosed at first, goading gamers along with the assurance of exposition.

Another worthwhile addition if the Womb of Grief, a six-level dungeon brimming with new demons to coax, additional elucidation, and the key to seeing Strange Journey’s new endings. Skillfully, the new location is interwoven into the original plotline, requiring players to revisit the womb at regular intervals, instead of being a single standalone destination. Given the location plays a key role in which conclusion you’ll see, you’ll appreciate the Redux’s twenty save slots, as well as the single-slot used for saving within dungeon. Similarly, your demon count has been lifted to 18, which adds a bit more strategy to battles. 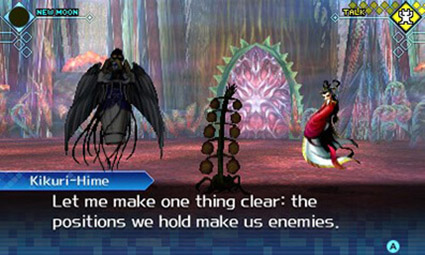 Shin Megami Tensei: Strange Journey Redux isn’t a wholesale overhaul, but more of a temperate upgrade. But that’s OK, since the original DS game was quite solid, earning a place in the portable’s recommended role-playing experiences. While Strange Journey’s level of involvedness isn’t for everyone, those seeking an experience worthy of sinking a hundred hours into won’t be disappointed.

Shin Megami Tensei: Strange Journey Redux was played
on the 3DS with review code provided by the publisher.

Summary : Resurrecting Shin Megami Tensei: Strange Journey Redux isn’t so strange. It’s an intriguing RPG with capable of captivating players with its ‘gotta catch ‘em all’ demon cajoling and intriguing combat system, made even better with a number of seamless supplements.