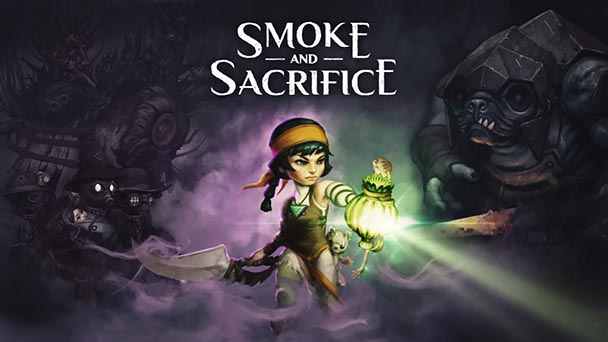 The abundance of survival-themed games could be read as a harbinger. Titles like Minecraft, Crashlands, How to Survive, Oxygen Not Included, and a bevy of battle-royale games all toss players into desolate environments. Here, persistence usually hinges on the ability to use tools, weapons, and build makeshift shelters. Each flings a near-insurmountable amount of adversity at players, knowing that only savvy, seasoned players will make it out alive.

The recent release of Solar Sail Games’ Smoke and Sacrifice for PC melds the basics of the survival-genre with the kind of storytelling set-up that’s common for role-playing games. In execution, it’s distressingly similar to games like Don’t Starve or Crashlands with players crafting provisional tools made from vegetation and exterminated hostiles. But for those who haven’t played either, Smoke and Sacrifice’s trek through a strange, unwelcoming environments could have made for an appealing respite. However, a number of flawed design decisions sully much of the satisfaction. 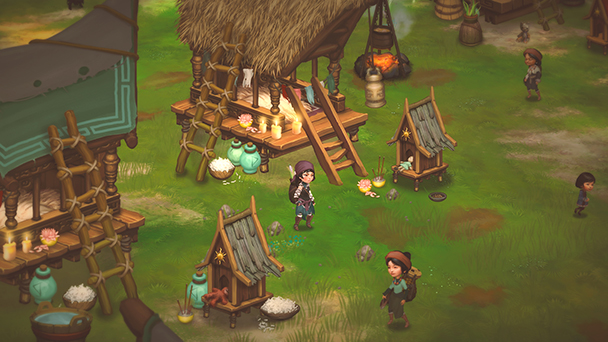 Much like Don’t Starve, Smoke and Sacrifice’s characters are marionette-like. With oversized heads and limbs with a few unmistakable points of articulation, they bobble about the screen. Despite their inelegant appearance and animation, the game’s opening is poised to produce sentiment. We are first introduced to the game’s protagonist, Sachi after a long day tending to the fields in an environment sustained by massive heating towers. Exhausted, she staggers home to her son, Lio, whose lonely cries reverberate across the settlement.

But the union is short-lived. The village’s elders demand Sachi to take the baby into their temple and place Lio on an altar. Survival, they insist, hinges on a human sacrifice.  After Lio is zapped by a towering apparatus, the child disappears. Soon it seems that the elders’ might have more sinister motivations.  When Sachi investigates, she’s transported to a mysterious and hostile landscape, where survival hinges on the ability to craft and scrap with the settings’ natural enemies. 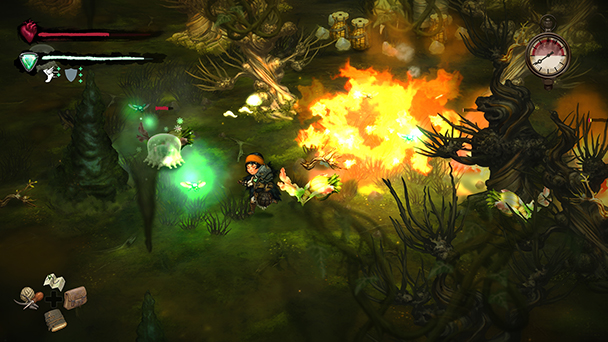 Living Off the Land

Resembling Don’t Starve, Sacrifice’s gameplay revolves around a day/night cycle. During the initial diurnal period, you’ll collect fireflies and plant parts in order to produce a magical torch that will repel the toxic fog that suffocates you at night. You’ll assemble rudimentary nets and health-replenishing from flora and fauna. But death is rarely distant.

A multitude of different creatures prowl the landscape, most attacking if you get too close. Being a two-dimensional character on a three-dimensional landscape can makes fighting back a bit difficult. But study the movements of each organism are telegraphed, and you’ll be able to eliminate most threats without exertion. Initially, you’ll have to use your fists to strike trees and creature. But before long, you’ll be able to bludgeon them with an improvised club. But Sacrifice’s settings are unfriendly, and gradually instruments and provisions with gradually degrade unless you take precautions. 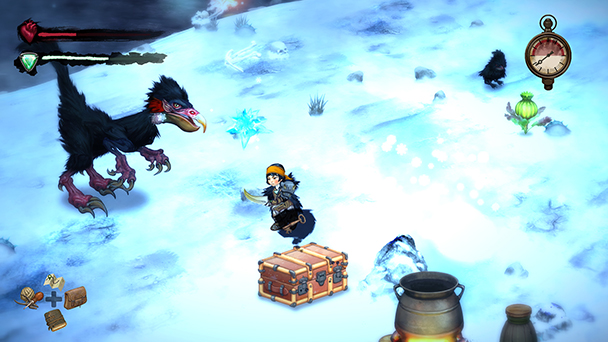 Sacrifice does an adequate job of simplifying the rudiments of survival. Hot keys bring up a map, missions, crafting menu and an inventory, and most tasks are never more than a button press or two. But eventually, the game’s core gameplay loop becomes upsettingly evident. Progress entail new assemblies and those require items which are contingent upon certain tools. While gathering, crafting, and locating new recipes is fun at first, the process becomes monotonous long before the end of the twenty-hour campaign. Factor in finite inventory space and things can quickly become a managerial chore.

Instead of permitting players to make their own way across Sacrifice’s hostile world, the game confiscates any sense of autonomy. Later, you’ll need certain types of boots to traverse different types of terrains and your approach is almost always evident and linear. Ideally the game would have incorporated a bit more equifinality into the proceeds, allowing you to plot your own course and methods of survival. Instead, the game seems determined to send players backtracking for resources. While the decision pads playtime, it doesn’t make for an enjoyable experience. All too often, Sacrifice’s simulated work feels like actual labor. 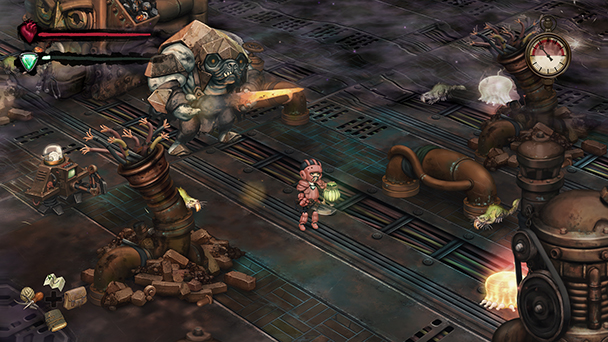 Monotony is the Game’s Toughest Opponent

Smoke and Sacrifice starts off strongly, providing a compelling motivation for your imminent actions. But gradually, the cycle of finding recipes, items, and crafting grows tiresome. While the developers toss in the sporadic boss battle to help offset tedium, the diversion is all too transitory. Largely so is the sense of gratification for Sachi’s journey.

Smoke and Sacrifice was plated on the PlayStation 4
with review code provided by the publisher.

Smoke and Sacrifice review
Stayin&rsquo; Alive The abundance of survival-themed games could be read as a harbinger. Titles like Minecraft, Crashlands, How to Survive, Oxygen Not Included, and a bevy of battle-royale games all toss players into desolate environments. Here, persistence usually hinges on the ability to use tools, weapons, and build makeshift shelters. Each flings a near-insurmountable amount of adversity at players, knowing that only savvy, seasoned players will make it out alive. The recent release of Solar Sail Games&rsquo; Smoke and Sacrifice for PC melds the basics of the survival-genre with the kind of storytelling set-up that&rsquo;s common for role-playing games. In&hellip;

Summary : Imagine Don’t Starve with more storytelling and woefully, more predictability, and you’ll have a pretty good idea what to expect from Smoke and Sacrifice.