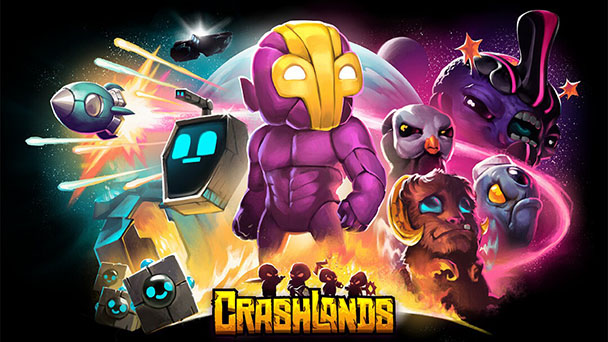 Centuries from now, when anthropologists attempt to assess the early 2000’s, they’ll likely notice an obsession with survivalism. From reality television shows where contests confront unhospitable locales to fictionalized films and series that survey how groups endure amidst a zombie apocalypse, fortitude is a ubiquitous theme in contemporary media. Unsurprisingly, games are no different, and whether we are confronting a mob of opponents ‘Battle Royale’-style or merely trying to persevere again the forces of nature, titles like Fortnight, PlayerUnknown’s Battlegrounds, Minecraft, Terraria, and Don’t Starve can seem like an appraisal of our survivalist skillset.

Previously released for mobile devices and on PC, a proficient Switch port of Crashlands offers yet another trial of tenacity. While many of its fundamentals, from crafting, exploration, and combat might feel familiar, it’s a much more merciful expedition than most of its peers. If you have ever desired to play a game that’s fixated on persistence but wanted a bit of leniency, developer Butterscotch Shenanigans’ title might fit your tastes. 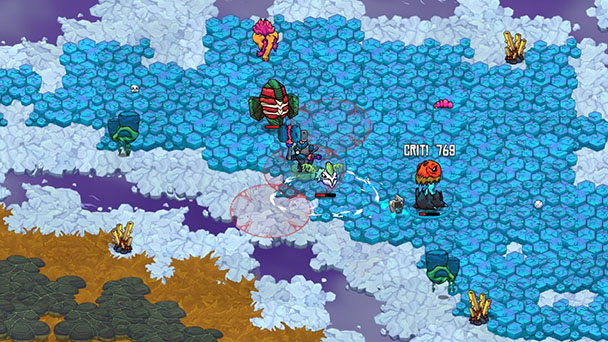 Typically, survival-driven games often offer the slimmest of storylines. Agreeably, that isn’t the case with Crashlands. A brief introduction offers a bit of witty banter between Flux, the game’s robotic protagonist, and her sidekick AI, Juicebox. The pair are pleased to be on schedule, as they’re on route to deliver a trio of packages. But the duo’s deeds are quickly undone by a disembodied head who identifies himself as Hewgodooko. In need of a mechanical part, the interloper destroys the ship, forcing Flux to gather the parcels and take refuge in an escape pod. As indicated implied by the title, the space couriers make an emergency landing on a nearby planet that’s filled with both resources and enemies.

Brimming with puns and whimsical humor, Crashlands’ narrative occasional toys with sentiment across it’s succession of quests. More importantly, the plotline helps to distract players from a gameplay loop which consists of gathering materials, crafting new equipment, unlocking new schematics, and exploring new areas- all before starting the process anew. Incentive is rooted in the interplay between the game’s characters, which help to build the game’s creative and surprisingly robust mythos. 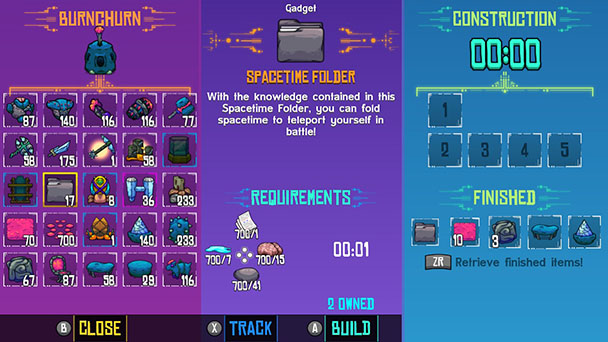 All too often, games which focus on crafting fixate on the fiddly details. Gratifyingly, Crashlands avoids that hindrance, simplifying the rudiments of hunting and gathering. Having an unlimited inventory helps avoid the irritations associations with item management. By permitting players to concentrate on locating and collecting resources, the game can maintain a steady flow with fewer interruptions.

Where most games require you to learn the locations of raw materials, Crashlands is surprisingly assistive, with a map available with a few button presses. Tools are context-sensitive so when you need a specific device to harvest materials it’s automatically placed in Flux’s hands without intervention.  Likewise, building is an intuitive affair, with the HUD reminding just how many items you’ll need before construction of your next contraption. With a bit of incubation, you’ll also be privy to an assistive pet, who will follow you about. 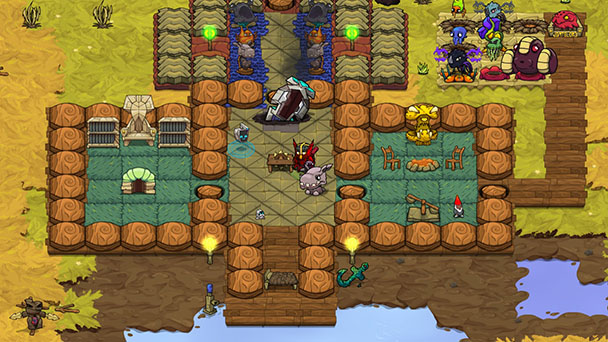 Naturally, collection isn’t free of adversity and Crashlands offers a satisfying variety of antagonists.  While some hostiles wander about innocuously until provoked, other will attack you on sight. Offense entails walking up to the enemy and tapping a button to attack, while defense requires you to move out of the red zones foreshadowing where the foe will soon strike. Periodically, you’ll take on bosses which test your skills as multiple attacks are summoned. While straightforward, these fights become one of the highlights of Crashlands’ story campaign.

When defeat inevitably comes, Crashlands doesn’t adhere to permadeath tradition. Defeat simply returns you to your starting biome, while all your acquired loot is dropped, instigating a mission to salvage the goods. But with the ability to fast travel, the expedition back to your resting place is rarely frustrating. Largely, it’s the same with NPC fetch quests, which will dispatch you to different reaches of the game’s rather vast world map. 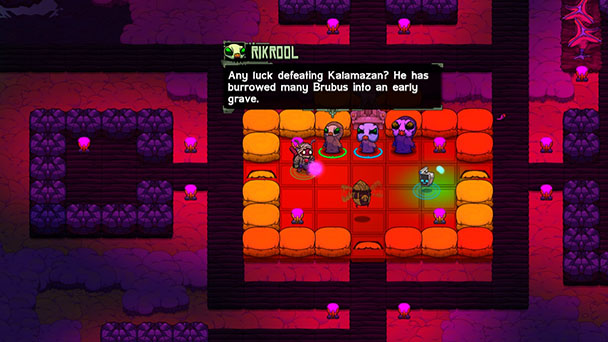 While the mobile version of Crashlands is cheaper than its PC and Switch-based brethren, the touchscreen interface doesn’t offer the precision of a mouse/keyboard combo or a controller. Since one of the essentials of survival is dodging enemy attacks, the title is more enjoyable with a discrete device. The Switch iteration is kind enough to offer both forms of input, but you’ll likely only want to use the touchscreen when inputting the name of your save file.

With an overhead perspective and animated two-dimensional characters, Crashlands is bound to draw comparison with Don’t Starve. But largely, the assessment is only skin-deep, with Butterscotch Shenanigans title offering a more accessible take on survival that’s welcoming to newcomers or those seeking a relaxed level of challenge. Although the title falls victim to that old obstinate enemy known as repetition, a number of design decisions help to offset the issue. Of all the places to become marooned, Crashlands is undoubtedly one of the more enjoyable ones.

Crashlands was played on the Switch with review code provided by the publisher.

Crashlands (Switch) review
Centuries from now, when anthropologists attempt to assess the early 2000&rsquo;s, they&rsquo;ll likely notice an obsession with survivalism. From reality television shows where contests confront unhospitable locales to fictionalized films and series that survey how groups endure amidst a zombie apocalypse, fortitude is a ubiquitous theme in contemporary media. Unsurprisingly, games are no different, and whether we are confronting a mob of opponents &lsquo;Battle Royale&rsquo;-style or merely trying to persevere again the forces of nature, titles like Fortnight, PlayerUnknown&rsquo;s Battlegrounds, Minecraft, Terraria, and Don&rsquo;t Starve can seem like an appraisal of our survivalist skillset. Previously released for mobile devices and&hellip;

Summary : Often, the cycle of gathering resources so you can harvest even more items can become stale long before the credits rolls. Crashlands does a number of things to offset fatigue. When coupled with difficulty levels that restrain frustration, it’s one of the better survival games found on the Switch.