The Sims 3: Into the Future Expansion Pack Review 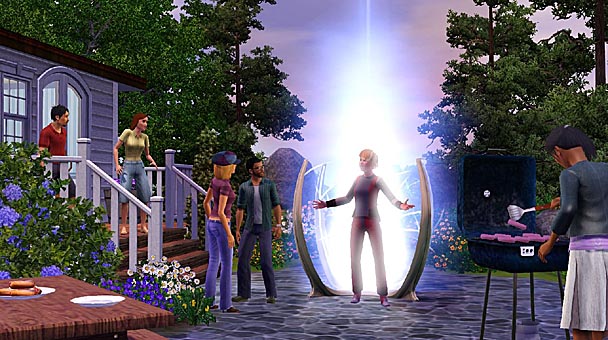 What is the concept? Science fiction habitually explores technological determinism, or how a society’s advances shape the development of its social structure and cultural values. With the release of the eleventh (and purportedly last) expansion for The Sims 3– entitled Into the Future, developer Maxis Salt Lake foresees a world saturated with unclouded optimism. It’s a future where luxuries like jetpacks, robots, and sonic showers remove much of the tedium of existence, allowing Sims to spend their spare time at the local observatory or scour a landscape for artifacts and a crashed ship. Even when present-day Sims are on a imprudent path- pushing future civilization toward dystopia, the consequences turn out to be only slightly troubling.

Following the installation of the Into the Future Expansion Pack, a portal will appear on the town map, accompanied by a mysterious man who functions as a chronologic chaperone. Inspecting the gateway extends the ability to travel hundreds of years into the future. Should players initiate the leap, they’ll find themselves in a new environment called Oasis Landing and in possession of the Almanac of Time- an inventory item which tracks the trajectory of your ancestors as well as the location of your descendants. 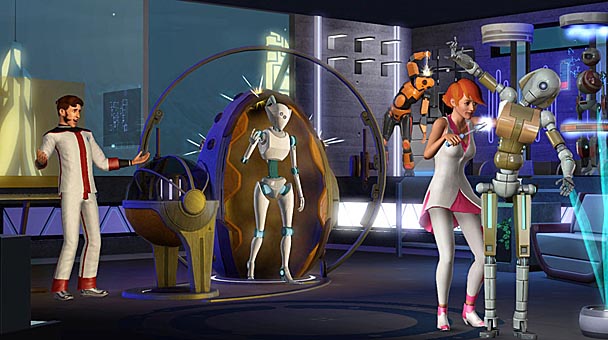 Borrowing from Robert Zemeckis’ 1995 film, Back to the Future, amusement comes from tweaking the time/space continuum and observing the results. For players driven by achievement, success in the present is immortalized through a Legacy Statue, a feat which also unlocks a distinctive perk. Sims fans who prefer a more laissez-faire approach, will be interested by seeing traits and practices (family size, for instance) carried onto future generations.

What are the expansion’s strengths? Undeniably, the addition of Plumbots proves to be Into the Future’s greatest addition. Sims who augment their bot building skill to the second tier will be able to construct their own automatons at one of the designated building stations. Although new Plumbots have a limited functionality as the game progresses, trait chips can be added to make these beings sentient as well as increase their autonomy. For many, tasking Plumbots to manage household chores will be a boon, although the bots do require periodic maintenance and power charging. That said, gamers may use any of bot’s seven trait slots for development, adding elements such as solar regeneration or increase power efficiency. 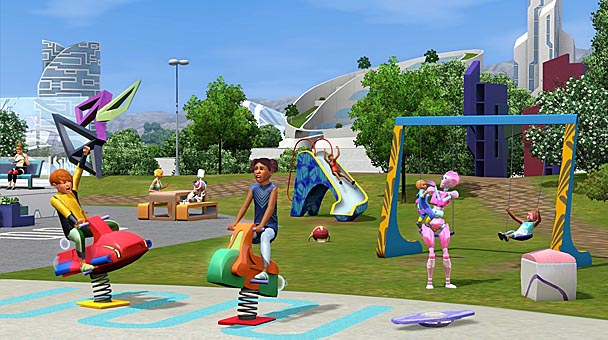 Like humans, Plumbots forge relationships with fellow androids, which can result in adorable, baby bots. Although robots can be augmented to fear humans or given chips which allow then to feel emotion, allowing them to have relations with open-minded humans. Since Sims act a bit like automatons, it never feels creepy. Unfortunately, the pack never addresses the potential of a Plumbot coup d’état or even the peculiarity of a largely automated society.

While many of Into the Future’s contraptions are merely preexisting machines with an obligatory reskin, other devices offer functional variance. The addition of jetpacks, monorail trains, and hover boards and cars quicken travel, while food synthesizers deliver meals without the fuss of preparation. One interesting addition is the Laser Rhythm-a-con, which acts like a high-tech Theremin. 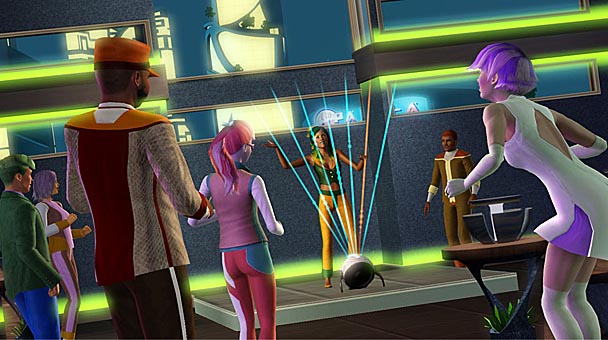 What are the expansion’s weaknesses? Into the Future owners will likely start the expansion in a normal future, where Oasis Landing’s ultramodern architecture is the main visual draw. Once a Sim learns the advanced technology skill or certain conditions in the Almanac of Time are met, the environment can change into utopian or dystopian variants. Regretfully, the changes are largely aesthetic. In an ideal future, people are friendlier and an enigmatic dew in sprinkled across the environment, but the biggest change is the addition of vibrant cherry blossoms and rainbows.

In the dystopian deviation, the world is coated with a sepia haze, as meteors fall from the sky and garbage piles litter the streets. Yet, these environmental transgressions are hardly troubling- Sims can savage items from both elements. Players expected a Mad Max or even Blade Runner-inspired world will be disappointed by the game’s sanitized depiction of decay. A bit worse is the game’s representation of future fashion- while some of the clothing and facial hair stylings are respectable, others looks like a Hunger Games knock-off. While it might be idealistic to expect an aesthetic as inspired as say, Jean-Paul Gaultier’s costuming for The Fifth Element, as it stands, the expansion’s designs can be a bit generic. 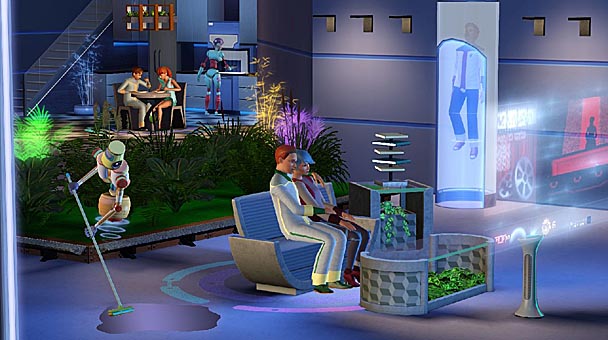 Is the expansion worth the money? At forty dollars, Into the Future converges on the costly, with a price that’s more than twice the amount of the required base game. Yet, for Sim stalwarts yearning for one last destination before venturing into the fourth iteration next Fall, this expansion provides plenty of elements to play around with. Being able to influence the future of your Sim ancestry is certainly enjoyable, and may prove to be an enticing endeavor for fans.

The Sims 3: Into the Future Expansion Pack was played on PC with a review code provided by the publisher.

The Sims 3: Into the Future Expansion Pack Review
What is the concept? Science fiction habitually explores technological determinism, or how a society's advances shape the development of its social structure and cultural values. With the release of the eleventh (and purportedly last) expansion for The Sims 3- entitled Into the Future, developer Maxis Salt Lake foresees a world saturated with unclouded optimism. It&rsquo;s a future where luxuries like jetpacks, robots, and sonic showers remove much of the tedium of existence, allowing Sims to spend their spare time at the local observatory or scour a landscape for artifacts and a crashed ship. Even when present-day Sims are on a&hellip;

Summary : Two parts Jetsons, one part Back to the Future, The Sims 3: Into the Future offers plenty of good times and a fitting farewell as we await the fourth iteration.