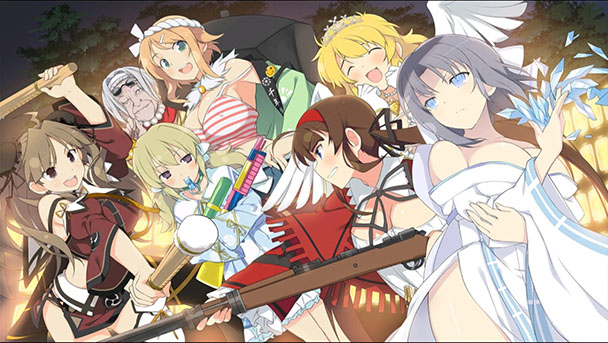 Critics assail Michael Bay’s films for their daft dialog and preference for bombastic special effects over subtle storytelling. But there’s no debating the director’s talent for visual sophistication. Bay is known for dynamic shots that keep the camera constantly moving. No matter how bad the plot is, our eyes are continually transfixed by the unremitting on-screen activity. Indisputably, Senran Kagura creator and producer Kenichiro Takaki adapts a similar approach.

Load up Senran Kagura Estival Versus, the franchise’s latest entry, and you can’t help but notice a persistent parade of jiggle. Breasts bounce pendulously, whether confined in clothing or are almost completely uncovered. Butt cheeks bounce hypnotically, as the game’s camera lithely coils around for a playful peek. Both body parts demonstrate developer Tamsoft’s mastery of physics as the game’s cast of nudist ninjas pull a scroll from between one of their nether-regions. 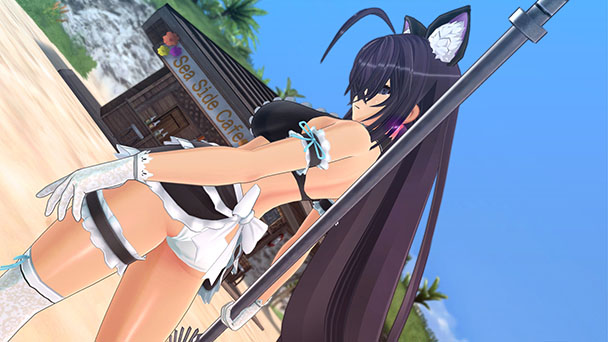 Such a fetishism of the female form should probably send sensitive social-justice warrior types into seizures. But here’s the thing- it’s hard to find fault in Estival Versus’ approach. Step into the title’s main campaign, entitled the Kagura Millennium Festival, and you’ll find a world that’s completely devoid of men. The realm’s leaders are elder women, almost everyone is an independent, capable fighter without need for macho protector, and when the shinobi do flirt with the prospect of sensuality, it’s strictly yuri-driven. Sure, some might argue that Senran Karuga is the epitome of objectification, but the divergence from traditional harem fantasy gives the property a transgressive twist.

Less effective is the game’s longing to combine an emotive story with impish cavorting. An animated cinematic sets up Estival Versus, discussing the discontent of a shinobi in the afterworld. It’s a stimulating concept and one that certainly deserves exploration, but one that largely squandered here. Instead, the title works best when it’s mischievous, playing to each girl’s personality- whether it’s Ryōna’s blend of exhibitionism and masochistic tendencies or Murakumo’s insistence of wearing on oni mask to hide her insecurities. Naturally, these puckish qualities seep into gameplay, tempting gamers with the prospect of a panty-eating competition. Be warned that Estival Versus makes little effort to bring newcomers up to speed, with academy allegiances and backstory often going unexplained. Almost amusing is a character’s suggestion of watching the OVA for context; these shinobi certainly know how to shill. 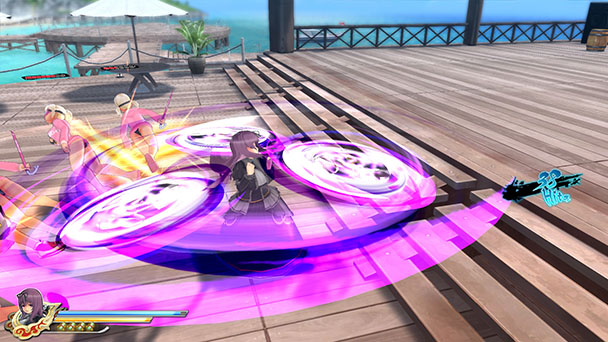 Pleasing, the game’s plotline follows a single, protracted path, rather than the multi-storied approach of previous titles. The upside of a solitary perspective is that the story is easier to follow, even as it shifts characters as often as these shinobi change wardrobes. Although the game’s collection of 34 protagonists share a communal control scheme, there’s a gratifying amount of divergence in play. From dawdling high damage dealers to nimble ninjas with lofty combo counts, there’s a character for all tastes, and the variety helps to offset some of tedium caused by middling AI. When foes to lash out, it’s often difficulty to interrupt their string of strikes, which is certain to be another sticking point with players.

But look past these problems, and Estival Versus offers a refined version of the franchise’s combat mechanics. Fighting is rooted in strong and weak attacks, typically used to control encroaching Dynasty Warriors-like crowds. Along with combos, players can also issue Aerial Raves, which not also issue additional damage but habitually propel players out of the middle of a mob. On stages that include a CPU-powered partner, you’ll be able to summon a Fusion Aerial Rave, which helps to compensate for your comrades lack of combat effectives. While it can be repetitive, the upside is the visual spectacle, with damage represented by the removal of clothes from opponents. 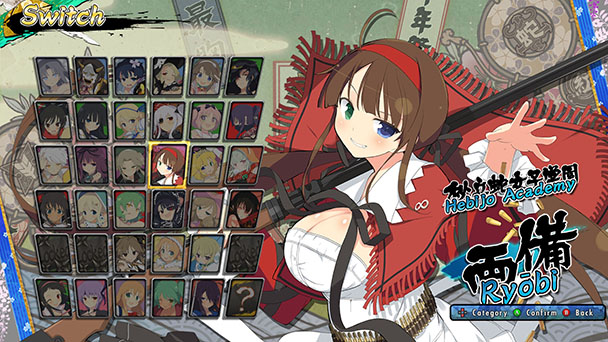 But they’re not the only ones who get a variable wardrobe. Gradually your garb begins to deteriorate under duress, leaving less protection from each incoming attack. To fight back against this hindrance, players can summon a Shinobi Transformation if their Ninja Art gauge is filled, providing new attire as well as access to strikes that issue immense amount of damage. Risk takers can go a step further, striping down to their skivvies, allowing inhibition to power-up their level of punishment. Strangely, near-naked ninjas tend to move slower than clothed ones.

As players persevere through the Kagura Millennium Festival, they gradually unlock access to new features like the Shinobi Girl’s Heart character-specific supplemental missions, which contribute a bit more story to each combatant. Special Missions pits the girls against each other- and are at their best when they group the girls into unlikely teams, crafting a number of comical situations. One of the biggest time sinks can be found in Estival Versus’ store, which allows purchases via in-game currency. Although product previews would have been helpful, earning coin to customize your team of shinobi and then pose them for a dioramic picture can induce obsession. Pleasingly, the PC release bundles the Ikki Tousen (Battle Vixens) characters that were recently released as DLC for the console and portable versions. 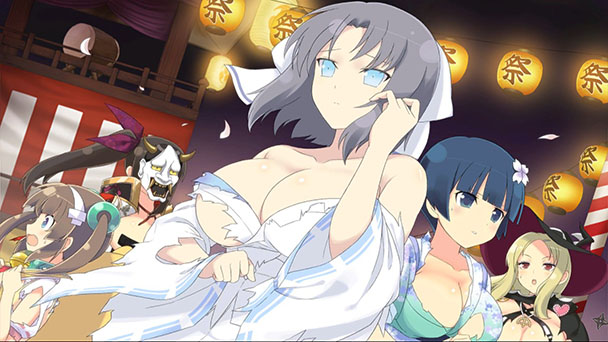 The inclusion of DLC characters does help to mend some of the blemishes found in the launch release of the PC version. For one, resolution selection is wonky, with players forced to set the output fidelity before determining play in windowed, borderless, or fullscreen mode. Other problems are evident during the game’s tutorial, with players occasionally unable to progress through the lesson. Currently, Estival Versus doesn’t save custom key bindings, forcing players to refine their inputs each time they play.

Visually, Estival Versus is a near-flawless beauty, with character models who move with sixty-per-second fluidity on at least a mid-range GPU. Between well-optimized code and a stylized approach that shirks high polygon, the game is an eye grabber, flaunting a perpetual procession of jiggle that will give eye muscles a vigorous workout. Sonically, the game’s score is solid, if undistinguished, but the game’s voice work is superior. 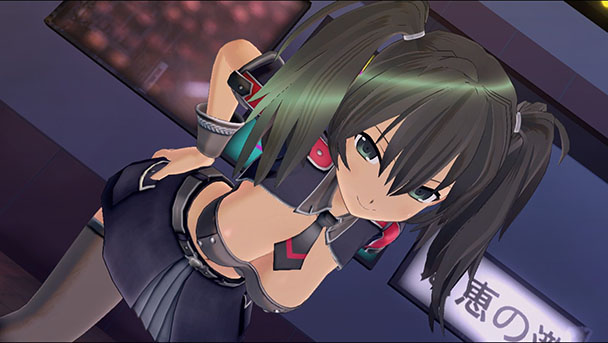 Take a cue from Senran Kagura Estival Versus’ balmy beach setting. Here’s an undeniably gorgeous game with a great sense of humor. While perfect for a seasonal fling, there’s probably not enough substance to support a long-term relationship. Like Tomonobu Itagaki’s Dead or Alive Xtreme Beach Volleyball, Estival Versus offers a sun-drenched destination that’s ideal for a short frolic-filed vacation.

Senran Kagura Estival Versus was played on the
PC with review code provided by the publisher.

Senran Kagura Estival Versus
Platform: PC, previously on PlayStation 4, PS Vita
Developer: Tamsoft
Publisher: XSEED Games, Marvelous USA
Release date: March 17th, 2017
Price: $39.99 via Steam, currently on sale for $35.99
Senran Kagura Estival Versus (PC) review
Critics assail Michael Bay&rsquo;s films for their daft dialog and preference for bombastic special effects over subtle storytelling. But there&rsquo;s no debating the director&rsquo;s talent for visual sophistication. Bay is known for dynamic shots that keep the camera constantly moving. No matter how bad the plot is, our eyes are continually transfixed by the unremitting on-screen activity. Indisputably, Senran Kagura creator and producer Kenichiro Takaki adapts a similar approach. Load up Senran Kagura Estival Versus, the franchise&rsquo;s latest entry, and you can&rsquo;t help but notice a persistent parade of jiggle. Breasts bounce pendulously, whether confined in clothing or are almost&hellip;

Summary : Senran Kagura Estival Versus’ plays at least half as good as it looks, which makes it a requite pick-up for fan-service supporters. So if shimapan elicits a smile, then Tamsoft’s title is likely to make you beam like an August sun.