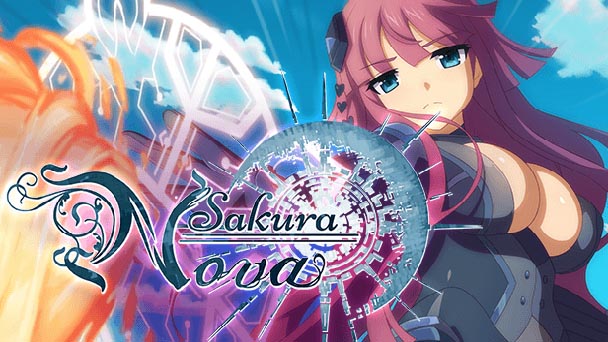 Whether it’s Shin Megami Tensei: Persona 4’s Social Links or Hyperdimension Neptunia’s Link Rank system, representations of camaraderie are common in gaming. With the release of Winged Cloud’s Sakura Nova, these interpersonal bonds become the impetus of a six-hour storyline, as a trio of adventurers strive to improve their level of mutual trust. Whether you play the standard Steam iteration or the uncensored edition that’s available via a free patch from Denpasoft, the version will have a significant impact on just how this companionship plays out.

Either way, the novel’s sexiness is signified with an opening CG that depicts a nubile, young pair of adventurers, Kaguya and Arisa, donning their battle armor at the First Royal Knight’s Academy. When lead character, Mikage, walks in on the bra-and panty-clad duo, they immediately assume that their new partner is nothing more a pervy interloper. But when an impromptu investigation arises in a classroom, the newcomer’s identity is verified. Fantastically, Reika, the Academy’s instructor advises the trio to strengthen their bonds, and that seeing each their fellow knights undressed is completely natural. Even if this is your first H-game, you can probably guess where this level of comfort takes the team. 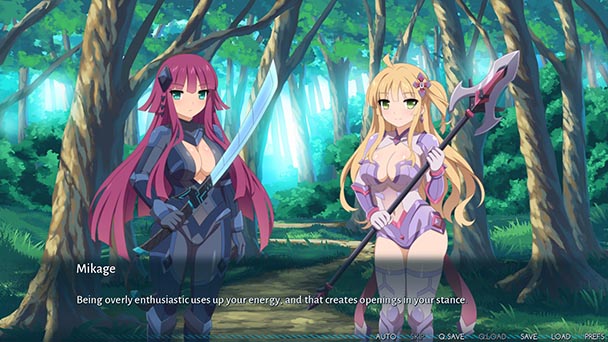 That’s not to say that Sakura Nova isn’t without a few surprises. For one, Mikage isn’t the usual unremarkable lead, as he reluctantly reveals on the team’s first expedition that his father is the realm’s most celebrated knight. Not only does this wrinkle make Sakura Nova a bit more interesting, it also helps to explain the amorous advances of Kaguya and Arisa. On the downside, Nova’s narrative trajectory becomes a bit predictable. Expect the trio to wander into a dungeon, one or both girls to get attacked, Mikage to act heroically, before the trio gets a lecture back at the assembly from Reika. Essentially, this happens multiple times, with a bit of additional exposition at Mikage’s father’s house.

But look past that issue and the novel’s journey is largely enjoyable- with playful, if banal, banter between party members. Naturally, the Steam version doesn’t provide the full payoff following the stretches of flirtation, with the Denpasoft patch not only adding genital collaboration, but also a significant amount of pre- and post-coital conversation. Given the context, readers shouldn’t expect profound characterization, but largely the plot is just interesting enough to maintain interest across its six-hour span. Multiple endings can be achieved by offering different responses to the Nova’s half-dozen or so responses, but largely the bulk of plot branching takes place during the novel’s denouement. 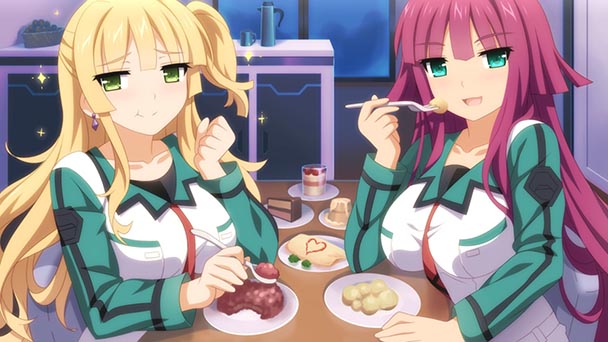 Visually, Sakura Nova offers adept art design, although the novel’s collection of assets can feel a bit abridged. Wanaca’s character portraits are devotedly drawn and exhibit a restrained amount of facial expressions, while backdrops are thoroughly attractive. Unfortunately, the novel only offers a few locales and tends to linger on some of its CG too long, dampening the delight of the read. While slime-covered girls and probing tentacles are undoubtedly humorous, their impact is lost when Nova lingers on a static image.  On the upside, Nova’s voice acting and soundtrack are praiseworthy, flaunting expressive dialog delivery and a variety of melodious toe-tappers.

A VN’s interface can inhibit the impact of a storyline, but fortunately, Sakura Nova’s UI is flawless. Readers can advance dialog with a number of different keys or mouse clicks, and pleasingly, a scroll wheel can be used to review any missed conversational elements. Beyond the ability to automatically move the story along, the novel also extends rudiments like 64 auto and quick save slots, as well as a CG gallery. Although the novel native output is 720p, scaling up to 1080 lines of resolution didn’t have much of a detrimental effect on image quality. 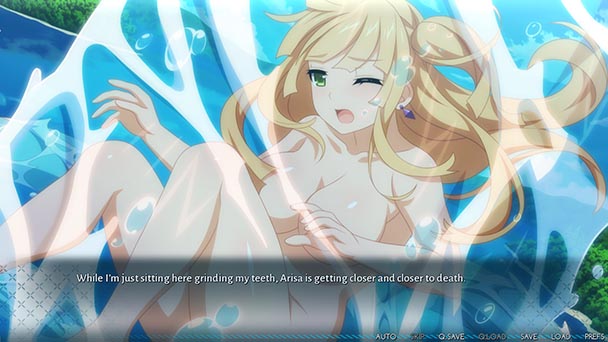 As lascivious-minded visual novel’s go, Sakura Nova is a solid, but not quite an essential read. While there’s a bit of humor and a few risqué thrills, the experience in undermined by a restrained amount of art and a narrative that not quite as laugh-inducing as it should be. An improvement on Winged Cloud’s preceding efforts, Nova is best suited to the most devoted eroge enthusiasts.

Sakura Nova
Platform: PC
Developer: Winged Cloud
Publisher: Sekai Project
Release Date: October 20th, 2016
Price: $14.99 via Steam, currently on sale for $11.99
Sakura Nova review
Whether it&rsquo;s Shin Megami Tensei: Persona 4&rsquo;s Social Links or Hyperdimension Neptunia&rsquo;s Link Rank system, representations of camaraderie are common in gaming. With the release of Winged Cloud&rsquo;s Sakura Nova, these interpersonal bonds become the impetus of a six-hour storyline, as a trio of adventurers strive to improve their level of mutual trust. Whether you play the standard Steam iteration or the uncensored edition that&rsquo;s available via a free patch from Denpasoft, the version will have a significant impact on just how this companionship plays out. Either way, the novel&rsquo;s sexiness is signified with an opening CG that depicts a&hellip;

Summary : At times, Sakura Nova is beautiful to look at and can be laugh-inducing. But both qualities don’t occur at the frequency exhibited by other, more exemplary visual novels.