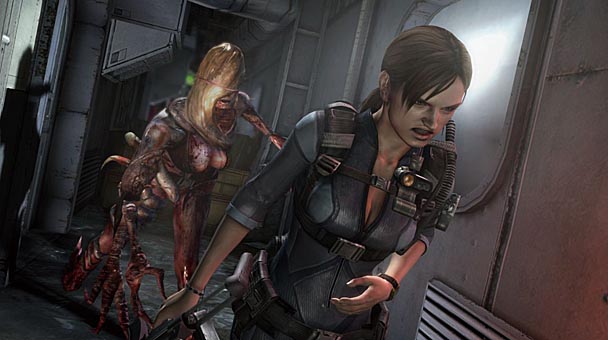 Presumably, to keep Resident Evil relevant, the series has shirked survival horror tenet across the last several iterations. The fourth and fifth entries in the franchise prioritized trigger-happy action over trepidation, delivering capable shooters which were a radical departure from the game’s creaky origins. Resident Evil 6 proved to especially contentious, offering a potpourri of play styles in an effort to placate gamers. While Leon Kennedy’s campaign revisited the game’s apprehensive roots, Chris Redfield’s section offered up a lukewarm interpretation of the third-person shooter, suggesting a distressing trend for the series. Mercifully, the 3DS release of Resident Evil: Revelations demonstrated that Capcom’s blueprint for scares and stimulating riddles could still contribute to the congested survival horror genre.

In an usual turn of events, Revelations has inverted the typical trajectory- moving from portable property to console and Windows-based game. While this type of backward port might seem discouraging for Xbox 360, PlayStation and PC owners, the title handles the leap onto more powerful hardware commendably. Although a few niggling elements reveal Revelations handheld heritage, a number of praiseworthy additions substantiate the purchase of this fifty dollar product. 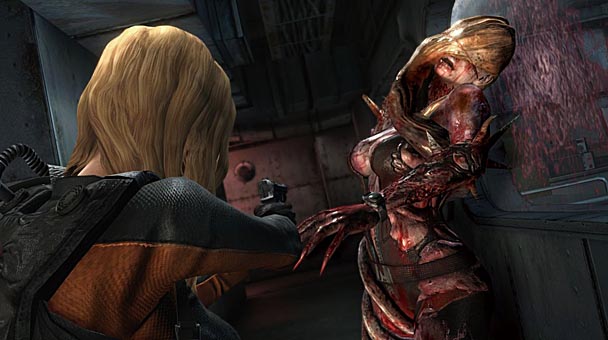 Set between the events of the fourth and first Resident Evil games, the bulk of Revelations gameplay takes place on the extravagant luxury liner, SS Queen Zenobia. Investigating the last known whereabouts of Chris Redfield, Jill Valentine and her new partner, Parker Luciani skulk through the vessel’s derelict casinos and shambolic cooking quarters. These types of claustrophobic interiors are reminiscent of the series’ early efforts, forcing players to pass by places where peril is likely to loom- effectively keeping the sense of tension high.

The Ooze, a new bioorganic menace which resembles a disfigured human is the most common obstacle about the Zenobia. With enhanced flexibility, this enemy is able to lurk in unanticipated areas, such as secluded alcoves and air ducts, supplying an obligatory number of scare jumps. Regretfully, eliminating these enemies isn’t as engaging as it should be. Typically, these foes don’t show much intelligence- shambling directly toward players as they absorb ammunition. While headshots incur a slight damage and limb damage sets up the creature for a devastating melee attack, targeting specific body sections isn’t particularly advantageous. Typically, players can get away with firing at Ooze variants until they collapse to the floor. 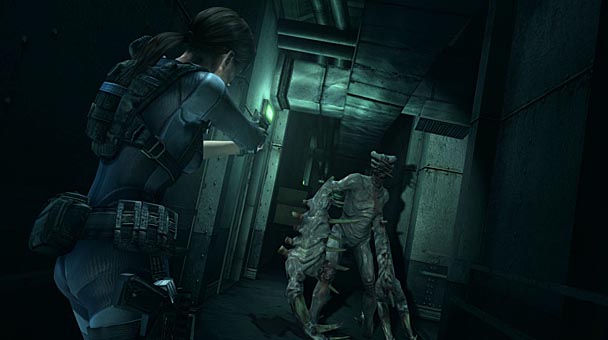 Boss battles, as well as a new enemy specially created for this version do require a more tactical approach, making encounters engaging. The sole downside is that these confrontations require players to use the dodge move, which requires a simultaneous pull of the stick and a button press. Too often this maneuver isn’t as responsive as it should be, resulting in a few aggravating hits from adversaries. That said, Revelations handles much better with the addition of a second analog stick, which pleasantly replaces combined movement/camera control (or the need for a Circle Pro Pad).

One component which didn’t receive improvement was the implementation of the Genesis- a device which allows players to scour environments for hidden resources. On the 3DS’s diminutive screen, these objects weren’t rendered, as they likely would have amount to little more than a small cluster of pixels. For this high definition iteration, items remain undrawn, which can be a bit perplexing. On Revelations’ normal mode this isn’t a problem, but the extra sundries will help players brave through the elevated difficulty levels. 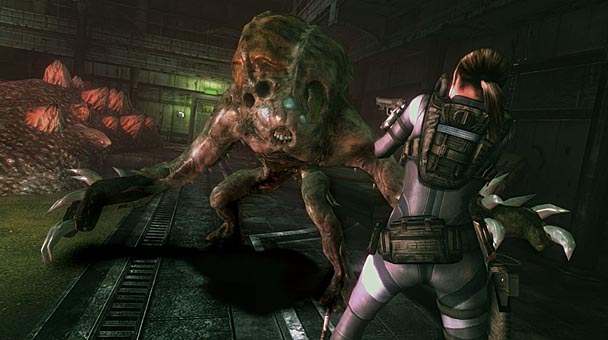 While Revelations’ core campaign forces players to take on enemies with an AI partner, the supplemental Raid mode gives the option of online co-operative play. Building on the 3DS’s already exceptional side-game, this component pares the title to its raw essentials- challenging players to reach the end of twenty increasingly difficult stages. With puzzles and item seeking eliminated, Raid is delightfully hectic as gamers mow through enemies and gradually level up their characters. Bolstered by a robust set of new unlockable protagonists and weapons, this mode is capable of retaining Resident Evil fans for at least a week or two.

Although Revelations doesn’t quite match the detail and fluidity of the latest now-gen Resident Evil titles, the game is an apt port. Lighting has been remarkably improved, often created locales lined with ominous shadows and darkened recesses. Admirably, the game’s cinematics have also been given the HD treatment, shirking the artifacting that beset the portable version. Sonically, the game’s melodies foster a sense of the ominous, while the game’s voice work varies from proficient to downright peculiar. 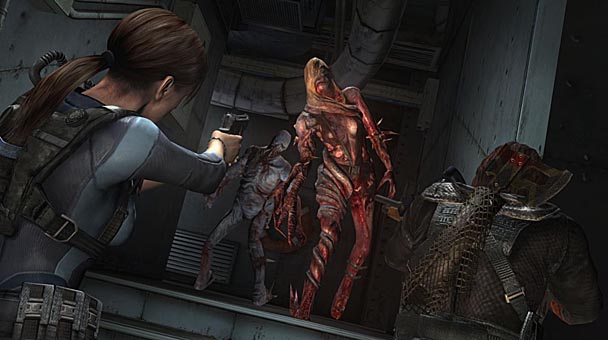 A tension between innovation and fan accommodation has seemly established the course of the Resident Evil series, with Capcom balancing the ambitions of designers with the desires of franchise devotees. The port of Resident Evil: Revelations demonstrates these two goals in congruence, delivering an absorbing title which revisits many of the elements which made the original Resident Evil resonate with players. Save for a few minor details, this game nearly feels it was built from the ground up to experience in your living room.

Resident Evil: Revelations Review
Presumably, to keep Resident Evil relevant, the series has shirked survival horror tenet across the last several iterations. The fourth and fifth entries in the franchise prioritized trigger-happy action over trepidation, delivering capable shooters which were a radical departure from the game&rsquo;s creaky origins. Resident Evil 6 proved to especially contentious, offering a potpourri of play styles in an effort to placate gamers. While Leon Kennedy&rsquo;s campaign revisited the game&rsquo;s apprehensive roots, Chris Redfield&rsquo;s section offered up a lukewarm interpretation of the third-person shooter, suggesting a distressing trend for the series. Mercifully, the 3DS release of Resident Evil: Revelations demonstrated&hellip;

Summary : If you overlooked the 3DS version of Resident Evil: Revelations, this adept port allows console and PC gamers to experience a pleasing return to survival horror fundamentals.