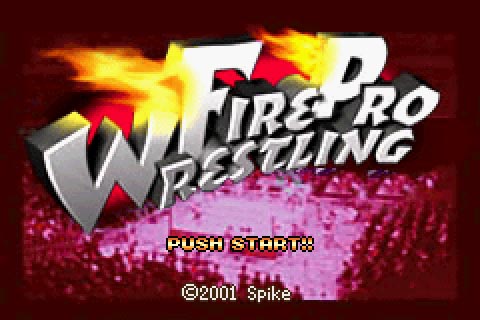 It’s hard to believe that it’s been a solid decade since Nintendo released the Game Boy Advance. In that time, we have seen the launch of four Nintendo consoles (GameCube, Wii, DS, & 3DS), a remake of a game that came out after the GBA (Halo:CE), the first Sonic The Hedgehog game on a Nintendo system, and the release of Duke Nukem Forever. It seems like just yesterday I was struggling to find a good ray of sunlight so I could play Super Mario Advance while working my family’s moving yard sale. The Game Boy Advance ended up exceeding the hype surrounding the Game Boy name thanks to it’s incredibly diverse library of games. For me, though, the GBA was all about one game. The one game that I bought a GBA at launch just to play. My favorite portable game ever. Join me as we take a look back at Spike and Bam Entertainment’s Fire Pro Wrestling.

If you grew up during the WWF VS. WCW/NWO “Monday Night War”, the Fire Pro series of Japan-only pro wrestling games were seen as dream games. Every Fire Pro game’s roster consisted of renamed look-a-likes of real-world wrestlers spanning almost every major wrestling promotion in the the world. Just about every major star you could think of that was popular in the months leading up to a new FPW game’s release was usually in. It was the series every American wrestling game fan wanted, but never thought they’d actually get their hands on due to the obvious issues involving likenesses. The wonders that a few palette changes can do. 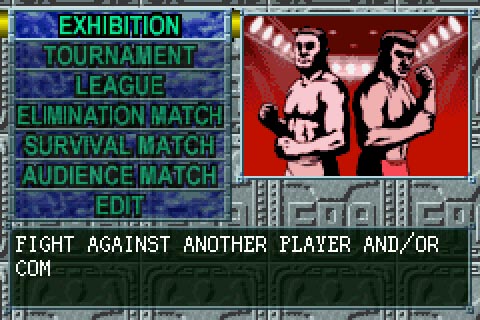 When it was announced that Fire Pro Wrestling A was coming to the U.S. as a GBA launch title, my mind was made up; I had to get it, even if it meant going toe-to-toe with Cactus Jack in a Japanese deathmatch. Thankfully, it didn’t take my blood getting spilled at the hands of Mrs. Foley’s Baby Boy for the game to end up in my hands. When I turned on the game and started up my first match, I was greeted by someone who looked just like “Stone Cold” Steve Austin, only he was wearing white trunks instead of black and his name was “The Bionic Man” Steve Majors. Majors’ move set was almost identical to the WWE Hall of Famer’s, as well. Scrolling through the APW/WWF and AWG/WCW rosters, I saw doppelgangers of almost everyone you could want; Hulk Hogan, Kevin Nash, HHH, The Rock, Undertaker, and so many more. The only differences were the names and that the colors of their ring gear, hair, and skin were changed enough to not draw the attention of the WWF, WCW, or ECW. Wrestlers in other promotions besides those three didn’t have their colors altered, only a name change. Both the colors and the names can be fixed in the game’s edit mode.

After picking my wrestler and opponent, the match began. To say it was a squash match might be a bit generous. Even on the easiest setting, the CPU dominated me like Bill Goldberg does a jobber. I had trouble with everything from connecting with simple standing strikes to pulling off grapple moves. Strikes require the part of the body that’s making contact with the enemy to hit them perfectly. Basically, if you try to punch someone when you are too close, it won’t connect. Grapple moves take some time to get used to, as well. The timing must be absolutely perfect. When you tie-up, you must hit your move’s inputs right when you hear the grappling sound effect. Fire Pro Wrestling does pack a steep learning curve, but once you’ve gotten over that mountain, FPW becomes the most enjoyable portable wrestling game on the planet. 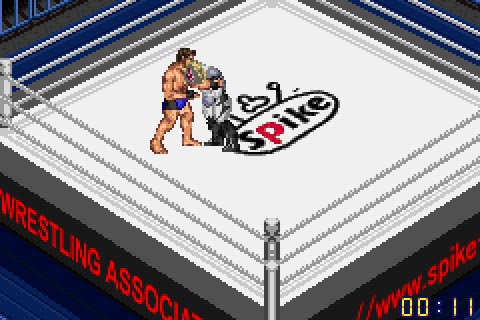 Often, the Fire Pro series is described as “a 2-D WWF No Mercy“. That isn’t quite accurate for a couple of reasons. One being that in FPW, there is no on-screen spirit meter, meaning that you have to rely solely on visual cues to see how well or not so well you’re doing. If a wrestler is hunched over, that means he’s severly winded and requires use of the game’s stamina button. If he falls over after one punch, he’s almost ready to put the finishing touches on. Speaking of finishers, that’s another thing that’s different about FPW; you don’t need to fill up any sort of meter to perform your finishing move. You have a move in your move set that’s designated as the wrestler’s finisher. You can attempt to pull off this move at any time during the match. Whether you’re successful or not depends on your momentum and how much you’ve beaten down the opponent.

The wrestling in FPW is treated like a showier mixed-martial arts. When you compare the gameplay of FPW’s MMA mode, called “Gruesome”, with a normal wrestling match, there isn’t a huge difference. The gruesome matches have a UFC-styled octagon and feature knock outs far more often than the wrestling matches do. Aside from that, the wrestling gameplay feels like professional fighting. Because of the more legitimate take on the wrestling, FPW also feels closer to a fighting game than the current WWE games do. Like fighting games, it doesn’t matter who of the game’s 200+ spandex Spartans you choose to wrestle as, every match can be entertaining. False finishes, surprise knock outs, come-from-behind wins, all of them can happen in any given match. It’s this unpredictability that makes Fire Pro Wrestling so enjoyable. No two matches ever play out in exactly the same way. 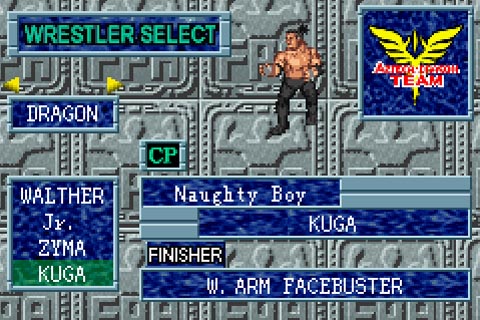 FPW packs a lot of mode variety. You have the exploding electrified barbed wire steel cage deathmatch, tag team matches, 3 or 4-person battle royals, tournaments, leagues, elimination matches (think WCW vs. NWO mode from WCW/NWO World Tour), the gruesome/MMA matches, a fantastic edit mode, and Audience Match, the  mode for unlocking hidden wrestlers where you have to wrestle a certain style of match (lucha, hardcore, etc.) to satisfy the crowd. Once you’ve unlocked the hidden wrestlers, there really isn’t much else to do. Fire Pro Wrestling is primarily a “create your own fun” type of game. For quick, on-the-go brawling, this might be for the best.

Fire Pro Wrestling has been with me from long car trips to longer (emotionally) stays in the ER waiting room when my late Grandpa’s health started going downhill. I didn’t really care about buying many other GBA games after FPW because it was the perfect portable game for me. This is the best wrestling/MMA game you can find on a portable, and one of the best wrestling games on any platform. When this game “clicks” for you, you’ll be a fan for life. If you love the squared circle, Fire Pro Wrestling is a must. Fantastic game.