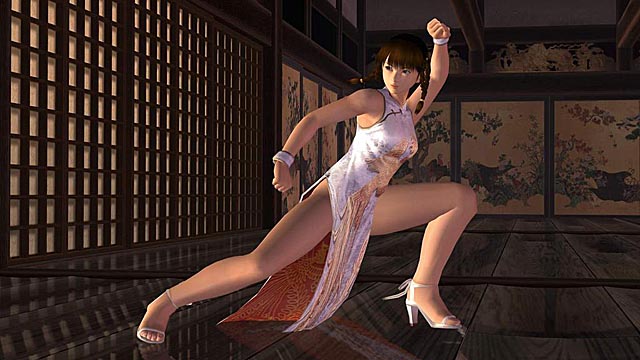 The first half of the compilation is the Sega Saturn version of the original Dead Or Alive, now called Dead Or Alive 1: Ultimate. The reason why it was renamed to that was mainly because this version of DOA1 had the ability to play the game online against other people. Unfortunately, the online portion of DOA1:U, as well as DOA2:U, is a “you had to be there” feature since Microsoft has shut down the Xbox Live functionality of all original Xbox games. While it is a painful loss, there are still several other modes at your disposal. The traditional fighting game modes, such as Arcade, Versus, Time Trial, Training, and Survival are all present and accounted for. Players who run through the Arcade mode will be rewarded with extra costumes for the victorious fighter. Also included is a mode called Kumite, where you take on 30, 50, or 100 CPU fighters to try to rack up a high score by beating them as quickly and effectively as possible. 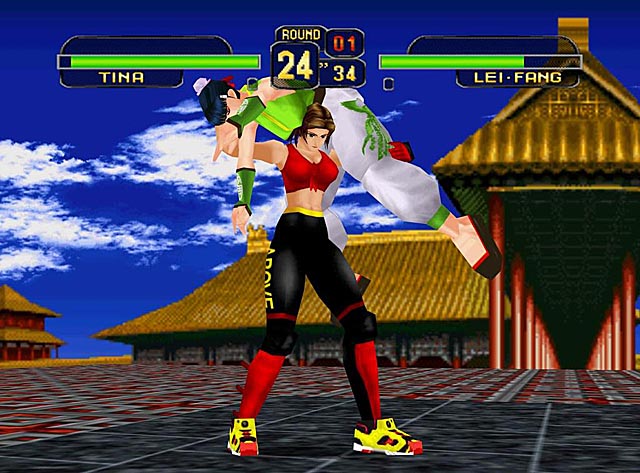 Make no mistake about it, though, Dead Or Alive 1: Ultimate is what most people would consider to be the “special attraction” of DOA: Ultimate. That’s a polite way of saying that the game is incredibly rigid and archaic. Throw commands require such precise button input timing and fighter positioning and placement that getting throws to execute in clutch situations feels like the luck of the draw. Punches, kicks, and other strikes fair a little better, but chaining them together doesn’t feel nearly as fluid as the later entries in the series. One nice gameplay feature is the “Danger Zone”, a grid along the outside of the primary fighting area; anyone who lands on it after receiving a move suffers additional damage. It puts a special emphasis on ring presence that few fighting games did at the time the game originally hit the Saturn. That said, DOA1:U is for the nostalgic and the nostalgic alone. The genre has evolved so far beyond DOA1:U that most players will probably spend the same amount of time actually playing it as they will reading about it in this column.

The main attraction of Dead Or Alive: Ultimate is the complete remake of Dead Or Alive 2. Perhaps “complete remake” is a bit of an understatement. If not for the DOA2 story sequences, Team NINJA could have easily called this Dead Or Alive 4 and no one would have thought anything of it. Everything has been overhauled and improved upon, even the roster. Because Tomonobu Itagaki — the creator of the Dead Or Alive series — liked her so much, Hitomi from Dead Or Alive 3 was added to DOA2:U‘s line-up. Although Hitomi made it in on account of favoritism, one can’t help but wonder why Team NINJA didn’t stitch in the rest of DOA3‘s new fighters (Christie, Brad Wong, and Ein’s true Hayate form) while they were at it. It’s a fair complaint, but an easy one to overlook because of everything the game does right. 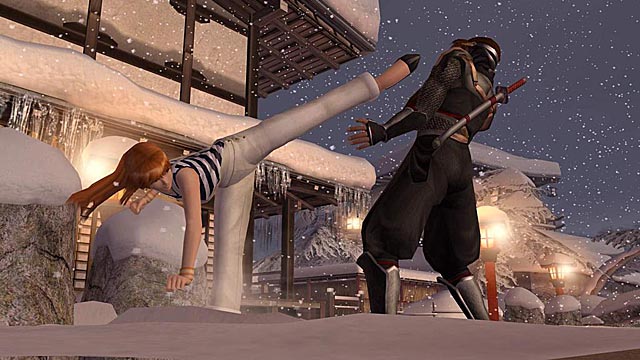 For the uninitiated, Dead Or Alive uses a Virtua Fighter-like three button control method; one punch button, one kick button, and one for guarding and countering called the “Free” button. Pressing various combinations of the three buttons (usually in conjunction with directional inputs) will do different moves, such as throws and taunts. Unlike DOA1:U, Dead Or Alive 2: Ultimate‘s gameplay is flashy, fluid, and silky smooth. Strikes and holds seamlessly transition from one to another so well that you would think they were just one long animated sequence. Those familiar with the series will find that the gameplay of Dead Or Alive 2: Ultimate is exactly like that of Dead Or Alive 3 with one major exception; the counter system. Previously, countering was done by pressing the “Free” button along with down + back, up + back, or just back on the D-pad/stick to match the height of the incoming strike. Now you’ll need to press Free + forward to counter mid-level height kicks. This change makes DOA2:U less counter-heavy than DOA3.

For single player fighting game fans, mode variety is a make-or-break issue. As I mentioned earlier, the online servers for all original Xbox games have gone dark, meaning that all DOA: Ultimate can offer you is offline amusement. Thankfully, DOA2:U has a healthy selection of modes to keep you occupied. Included are Story, Versus, Time Attack, Survival, Tag Battle, Team Battle, Sparring (Training), and a hidden gem named Battle Record. Battle Record works like this: you have one round of single or tag fighting against either an A.I. or human opponent. Once the round is finished, it is replayed. During the replay, you can fast-forward, pause, or rewind the action, adjust the camera angle and position, or save the whole replay. Basically, Battle Record is, for lack of a better term, a “quick fight” mode. This comes in handy since the Versus mode is only for two players. With Tag Battle, you choose a team of two fighters and make your way through an Arcade mode-like series of teams. Team Battle has you picking up to seven fighters to take on a team of random A.I. opponents or another player’s team. This mode highlights one of the game’s most impressive features: virtually nonexistent loading times. Matches in every mode load practically instantaneously, even when there are 14 different fighters in a Team Battle. 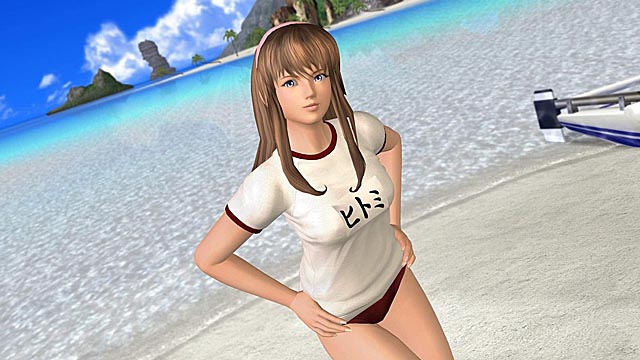 The sheer amount of content is incredible. Costumes dominate the spotlight here, shaming the costume offerings of current generation fighting games by offering a total of 167 costumes spanning the game’s roster. Again, I say one-hundred-and-sixty-seven costumes. On top of that, choosing a different hairstyle for certain female characters by pressing X, Y, or the White buttons on the character selection screen will even change the design of panties for a few costumes. It may be a little too much attention to detail, but you can’t help but chuckle at the fact that Team NINJA actually put that feature in the game. Still have a copy of Dead Or Alive 3 on-hand? Guess what? DOA: Ultimate includes the rare “Booster Disc” costume content for Dead Or Alive 3 that was available in the U.S. on the first Xbox Exhibition demo disc and in an issue of Official Xbox Magazine. Once the feature is unlocked, simply transfer the content to your Xbox’s hard drive and Dead Or Alive 3 will have some new costumes. Other unlockables include a CG Gallery featuring the women of DOA in swimsuits from Dead Or Alive: Xtreme Beach Volleyball and an abbreviated episode of G4’s old “Icons” TV show documenting the history of the Dead Or Alive series.

Team NINJA went all-out on the graphics. Granted, some will take issue with the characters having the skin of a resin statue. Those who are able to look past this stylistic choice will find that the clothing textures have a respectable amount of detail to them. When compared side-by-side with the character models of Dead Or Alive 3, the improvement in quality becomes apparent. But where the graphics truly shine is in the game’s 22 stages (not including variations). Environments are lush, colorful, and painstakingly detailed. “The Safari”, for example, is packed with the kind of wildlife you would expect to see in Africa; giraffes, hippos, lions, and elephants. It’s safe to say that no matter what stage you find yourself fighting in, Dead Or Alive 2: Ultimate is a satisfying visual treat. Environments are also interactive and destructible. You can knock a fighter through the face of a clock tower, sending them crashing through the stained glass dome of a nearby building below. DOA2:U has plenty of these “multi-tiered” stages for instilling basophobia in unlucky combatants. 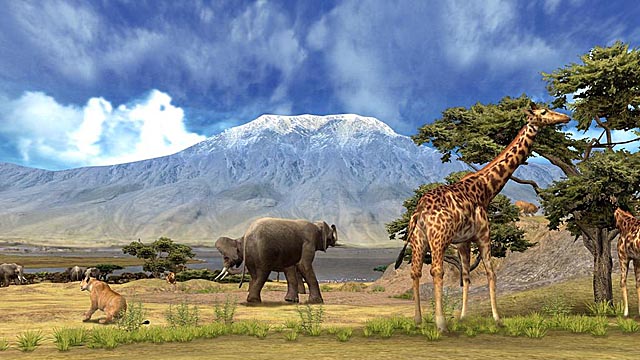 The last thing I’ll mention is the game’s audio. The opening CGI cutscene is in Japanese with English subtitles, as is all spoken character dialog. The typical “Round one! Fight!”-type snippets are the only English lines to be heard. Every character’s voice actor or actress is a perfect fit with the fighter they portray. The abomination that was DOA2: Hardcore‘s English voice-over work is nowhere to be found. The soundtrack is solid and well-produced, but aside from Aerosmith’s “Dream On”, it’s mostly forgettable.

There aren’t too many games I can think of that I’ve spent 300+ hours with over the years, but Dead Or Alive Ultimate is one of them. It’s also one of the only games where my hype for it was at a fever-pitch, yet it still exceeded my expectations. Simply put, I love this game and I loved every minute I’ve spent with it so far. Even though the online servers have gone dark, there’s still more than enough content to justify a purchase. Both discs are backwards compatible on the Xbox 360. 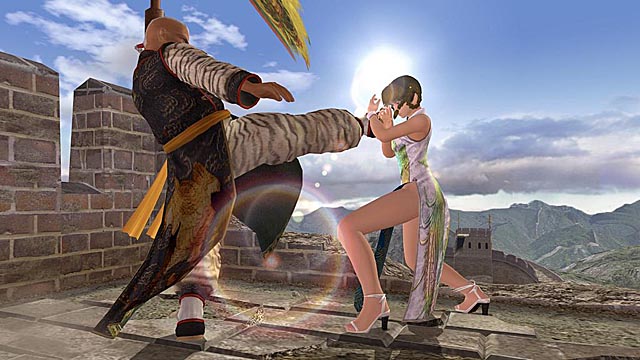 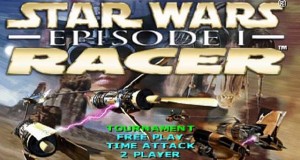