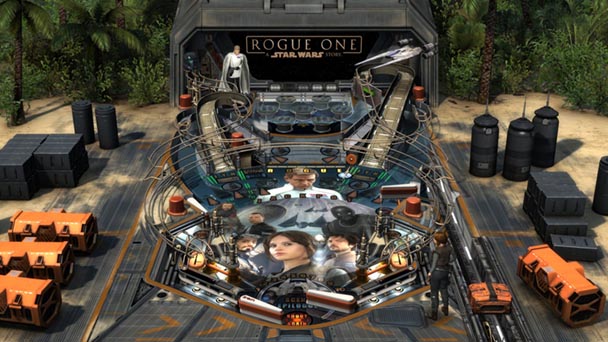 Pinball is a game about tragic inevitability. No matter how good you are at keeping the silver orb in play, inevitably gravity will win, dropping the ball down that stinking sink hole. Similarly, that’s also the challenge faced by Pinball FX2/Zen Pinball 2 developer Zen Studios. Since the game’s release back in 2010, the Budapest-based team has been creating a persistent process of add-ons. While there’s been a few flirtations with mediocrity, there’s never been an outright dud among the studio’s output of sixty-nine tables. Zen’s seventieth effort, Star Wars Pinball: Rogue One, keeps the ball in play, demonstrating the developer aptitude for making some of the best digital pin-sims on the planet.

Pleasingly, the Rogue One table doesn’t squander the paradisiac setting of its source material. Start a new game and the camera tilts down to showcase Scarif’s azure oceans and tall palms before setting for a more customary view of the table. Play starts with the ball launched from a tram, extending an introductory skill shot. Like Zen’s best efforts, Rogue One strikes that precarious balance between a table that’s rich with features and one suffers from wanton overcomplication. Although there’s no shortage of scoring opportunities, there are also plenty of tempting shooting vectors to endow the table with just enough speed. 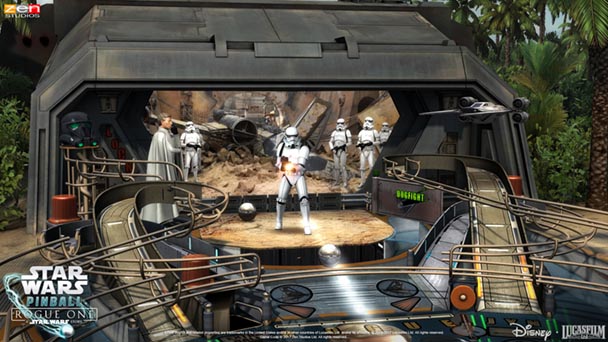 Most amazingly, Zen skillfully translates elements of the film into pinball-like objectives. The very top of the playfield has a twin-level tier, marked by the letters R-O-G-U-E, which when illuminated activate various story modes. Send the ball toward the top, and it will careen over simulated plexiglass, before dropping into a field of bumpers that represent a formation of TIE fighters. Naturally, dropping the ball into that zone triggers a satisfying succession of laser cannon screeches and tremors from the DualShock 4, which accuracy recreate the percussion of a real pin table.

But that’s not the only function up there. Other modes will task players with spinning a 2D representation of Chirrut, as he fights off a horde of Stormtroopers. Or the table with refashion the escape from Jedha scene from the movie, as an ominous Death Star emerges and players will have to aim for the outlying side lanes. The most interesting variant is when a hulking AT-AT appears, with gamers having to aim between the machine legs, symbolizing the rebels running underneath the lumbering monstrosity. 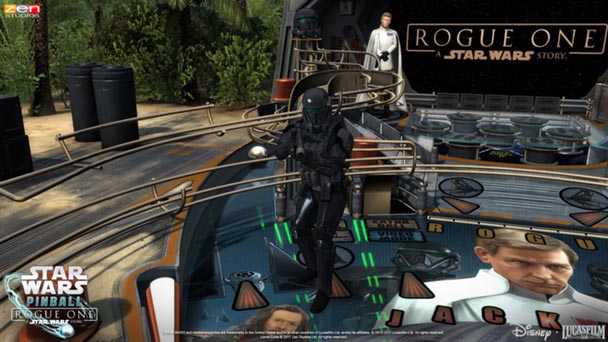 If there’s a transgression with the table, blame rests on the source material rather than this interpretation. For some, Krennic’s presence will seem a bit over bloated, with the Empire’s chief architect/bureaucrat receiving two modes and a likeness on the playfield that’s only dwarfed by an image of Jyn. Unless Zen is planning on making additional Rogue One tables, I would have preferred to see Galen Erso (Mads Mikkelsen) or Saw Gerrera (Forest Whitaker) get featured. But largely, that’s a subjective opinion with no impact on playability.

And when it’s comes to play, Star Wars Pinball: Rogue One following Zen’s tradition of softening challenge, allowing for fifteen minute games that probably would have been unlikely when pinball machine occupied arcades. As with other Pinball FX2/Zen Pinball 2 content, the lenience is welcome, allowing players to find their groove during extending play sessions. With Rogue One, losing the ball down the drain lanes is the most likely cause of defeat with the table rarely sending the ball past your flippers. 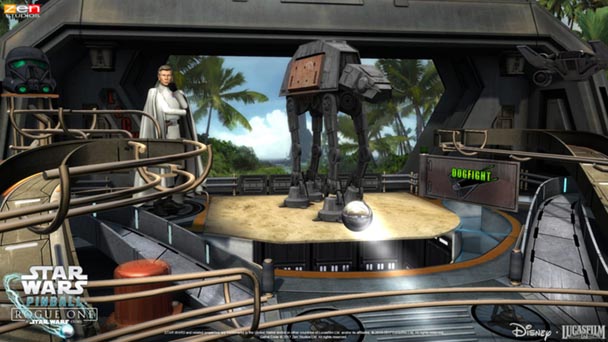 Like Star Wars’ rebels, Zen Studios were once a bunch of scrappy underdogs, struggling to keep other genres from trouncing pinball. Now, with seventy superior tables to their name, they’ve succeeding, cultivating an audience of appreciative fans. Gratifyingly, isn’t an indolent victory lap, but a table that’s one of the developer’s top efforts. Whether you’re a Star Wars fanatic or a pinball aficionado, Star Wars Pinball: Rogue One is worth checking out. And if you’re both, the table is an essential addition to your Zen collection.

Star Wars Pinball: Rogue One was played on the PS4 with review code provided by the publisher.

Star Wars Pinball: Rogue One
Platform: PS3, PS4, PS Vita, Xbox 360, Xbox One, PC, and mobile
Developer: Zen Studios
Publisher: Zen Studios
Release Date: January 31st, 2017
Price: $3.99 via PlayStation Network, XGS, Steam, Google Play, and the App Store
Star Wars Pinball: Rogue One review
Pinball is a game about tragic inevitability. No matter how good you are at keeping the silver orb in play, inevitably gravity will win, dropping the ball down that stinking sink hole. Similarly, that&rsquo;s also the challenge faced by Pinball FX2/Zen Pinball 2 developer Zen Studios. Since the game&rsquo;s release back in 2010, the Budapest-based team has been creating a persistent process of add-ons. While there&rsquo;s been a few flirtations with mediocrity, there&rsquo;s never been an outright dud among the studio&rsquo;s output of sixty-nine tables. Zen&rsquo;s seventieth effort, Star Wars Pinball: Rogue One, keeps the ball in play, demonstrating the&hellip;

Summary : Somehow Zen Studios keeps churning out quality pinball content, devising new ways to create semi-realistic tables. Like the film it’s based on, Star Wars Pinball: Rogue One is definitely one of the better ones.