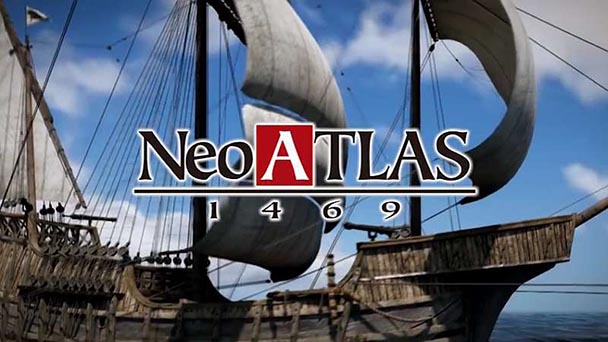 Exploration and expansionism have been at the very core of gaming’s best efforts, propelling the Civilization, Age of Empires, and Age of Wonders franchises to critical and commercial success. These two activities, along with the duty of mapping the entire globe, also serve as your motivations across Neo Atlus 1469. Originally released as a Japanese PSOne title in 1998 and re-envisioned for the PS Vita last year, Artdink’s curious blend of global reconnaissance, trade simulation, and visual novel has made its way onto Steam. Like many of the Tsukishima, Tokyo-based developers’ titles, it’s a wonderfully distinctive experience, transforming a complex endeavor into an accessible, and at times, engrossing experience. But the journey of demonstrating that the surface of the Earth is spherical isn’t without a few niggling blemishes and won’t satisfy those captivated by complication.

Head into Neo Atlas 1469 and you’ll be asked if want to play through the title’s tutorial. Given the game’s distinctive approach to exploration, trade, and a few UI peculiarities, the hour-long seminar is a near-necessity for first-timers. During the duration, you’ll discover that the first order of business is rescuing Antonio Gomez. A respected admiral who had narrowly avoided mishap after pirates besieged his ship, Gomez was forced to seek refuge on a landform with three jutting mountains, offering a clue to his whereabouts. 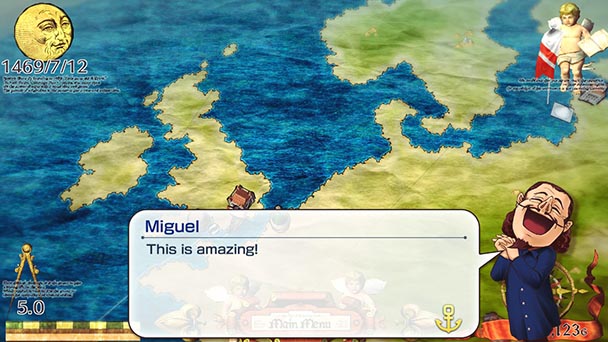 Additional hints are uncovered when following the sage advice of Miguel, a perpetually energetic assistant, who suggests an inaugural expedition. That in turn, wins over Peres, a scientist capable of procuring additional evidence. Like most of Neo Atlas 1469, there’s the impression of discovery, but behind the scenes, the game limits your available options at any given time. Although this might sound like a detriment, it helps to keep the title moving along, and prohibit players from becoming literally and figuratively lost at sea.

Soon, Atlas 1469’ ultimate impetus becomes clear, with players tasked with the complete cartography of the world. Given the subject matter, Artdink artfully avoids most of the ugliness of imperialism. Instead of subjugating foreign lands, economic success through the development of trade lines is the method to finance your endeavor.  Sure, its revisionist history, with stat-based ship battles serving as the game’s sole form of conflict. But Atlas isn’t interested in teaching a history lesson in colonialism. Instead, the game wishes to convey the thrill of steadily filling in a world map and the sense of discovery when new landforms are discovered. 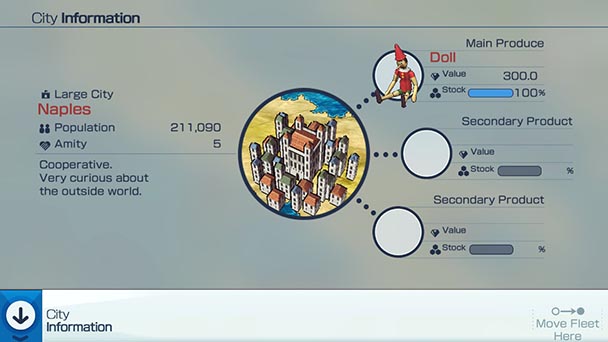 Mouse across the simulated parchment that represents the known world and you’ll be able to scout cities and their associated resources, while the rest of the globe is girded off in a cloudy haze. Click on the treasure chests that dot the European and North African landscapes and you’ll spy the occasional treasure chest. Opening the giant trunk reveals a discovery that contributes to the Portuguese Trading Companies’ coffers, padding your expeditionary funds.

Larger towns on the map produce distinctive resources. When player create a link between grape fields and wooden barrels or sulfur and saltpeter depots, conjoined consummates like wine and gunpowder are produced, earning the players a tidy profit. And if the trade line doesn’t look to produce a profit, Miguel will chime in, ensuring that it’s difficult to run the Trading Company right into the ground. 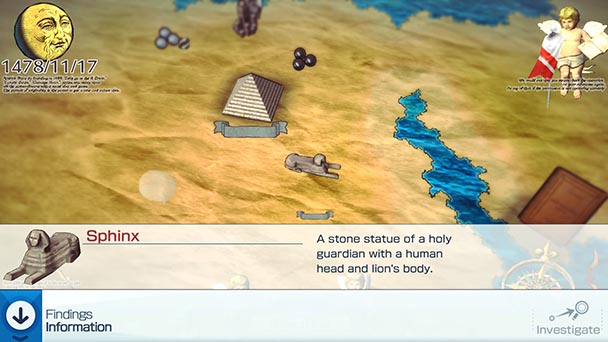 If you approach Neo Atlas 1469 expecting a complex economic sim, you might be a bit disappointed. The ebb and flow of surplus and scarcity is nowhere to be found, with goods holding an unchanging value. Ultimately, that means that once you set up a trade route, you can expect a revenue stream where the only variable is ship speed. Ultimately, the decision allows players to concentrate on exploration, and less about the month-to-month balance sheets, but might put off players seeking intricacy in their global exploration. Discerningly, interaction with other cultures is largely implied, with none of the intricate geopoliticing of say the Europa Universalis series.

But when your subordinates begin to reconnoiter the realm and discover new undiscovered continents and islands, Neo Atlas 1469 can make you feel like a virtual Ferdinand and Isabella. Following the games’ introductory period, centered around Western Europe, the veil of discovery lifts to reveal a procedurally-generated planet that’s different for each playthrough. As such, there’s the sense of minor disappointment when explorers run into tiny atolls and elation when massive landmasses are discovered. Since it’s randomized, there’s even the possibility of encountering mythical empires as well. 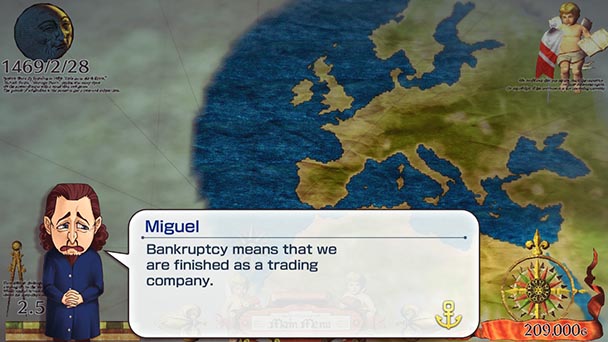 The presence of pirates, kraken, and the limited range of your fleets continually push the Portuguese Trading Company to develop, perpetuating Atlas’ game cycle. If you don’t mind clicking through processions of petite pieces of dialog, the loop can be tantalizing. But it’s a shame that the game’s UI has a few oddities. Creating trade routes requires players to scroll across expansive sections of the map, while the game’s pin feature that used to mark part of your map, is a bit unwieldly. It’s not a deal killer by any means, especially since players can use hot keys, but given the straightforward approach to Atlas, a wholly instinctive mouse-based interface would have been appreciated.

Before heading in Neo Atlas 1469’s waters, know that the game doesn’t extend wide swaths of freedom. Approach this PC game expecting Uncharted Waters or even Civilization and you’ll surely be disappointed. As a port of a Japanese PS Vita title, 1469 is a story-based experience rooted in the thrill of discovery, rather than a detailed simulation with full player autonomy. It might be a different approach that what most Western gamers might be accustomed to, but one where enjoyment doesn’t require hours of dedicated study. As such, open-minded players without dozens of hours to invest in study might be interesting in exploring this distinctive title. 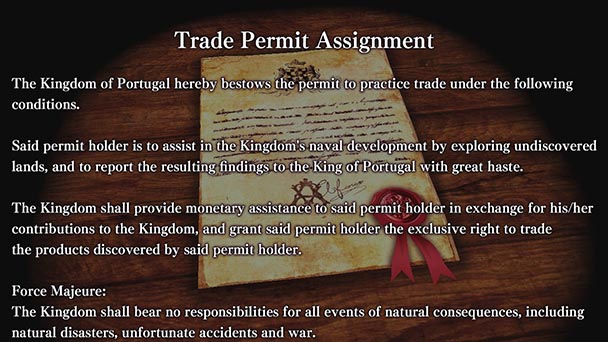 Neo Atlas 1469 was played on the PC with review code provided by the publisher.

Neo Atlas 1469
Platform: PC
Developer: Artdink
Publisher: Arc System Works
Release date: February 14th, 2017
Price: $29.99 via Steam
Neo Atlas 1469 review
Exploration and expansionism have been at the very core of gaming&rsquo;s best efforts, propelling the Civilization, Age of Empires, and Age of Wonders franchises to critical and commercial success. These two activities, along with the duty of mapping the entire globe, also serve as your motivations across Neo Atlus 1469. Originally released as a Japanese PSOne title in 1998 and re-envisioned for the PS Vita last year, Artdink&rsquo;s curious blend of global reconnaissance, trade simulation, and visual novel has made its way onto Steam. Like many of the Tsukishima, Tokyo-based developers&rsquo; titles, it&rsquo;s a wonderfully distinctive experience, transforming a complex&hellip;

Summary : An interesting blend of visual novel-style storytelling, simplistic simulation, and exploration across a procedurally-generated Earth-like planet, Neo Atlas 1469 boils global cartography down the bare essentials. Depending on your perspective, this approach can be a boon or a bust.