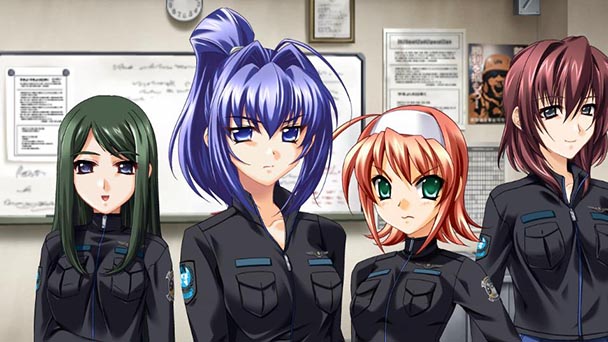 In contemporary media, commercial success and artistry are inescapably intertwined. Developing a lucrative, long-term property is just as important as the actual storytelling. As evidenced by the output of Hollywood, book publishers, and the game industry, sequels and spin-offs are ubiquitous. As such, audiences have developed a certain set of expectations when it comes to a follow-up or off-shoot. Habitually, these efforts feel complacently derivative, reiterating on themes, visual styles, and motifs with only negligible variation. Sequels are modern entertainment’s version of fast food- quickly consumed, scarcely analyzed, and expected to be habit-forming.

Which makes the Muv-Luv visual novels so remarkably refreshing. Here’s a succession of narratives that feel like they were preconceived as a single, long-form exploration of the human spirit, rather than an interminable sequence of tales made up as they go along. I’s a work that’s completely aware of expectations and is all too happy to shatter them at regular intervals. As such, it’s imperative that you play the original Muv-Luv before venturing into Alternative. 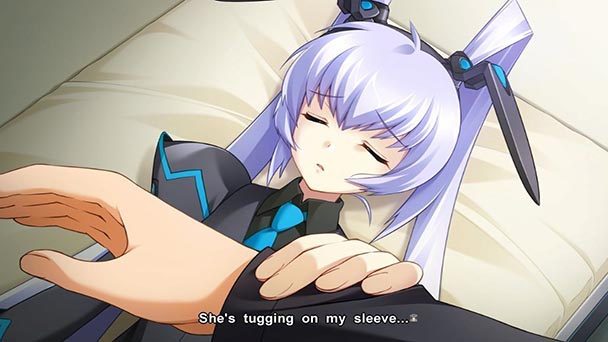 As stated in our Muv-Luv review, the original visual novel is broken into two parts. Initially, the first half, entitled Extra, seems indistinguishable from the multitude of conventional harem romps. Here, lead Takeru Shirogane wakes to find himself surrounded by a multiple of amorous characters, extending an inventory of tropes that range from the childhood best friend, enigmatic heiress, the amiable class representative, and even the girl with feline-like qualities. While the story never truly transcended the sub-genre, it was still a thoroughly enjoyable experience, thanks to some solid character development and interactions between the cast. Likely, by the end of the read, you’ll have grown attached to Extra’s characters.

Then Unlimited arrives and turns Muv-Luv’s congenial world upside-down. Once again, Takeru wakes, but this time the setting that slipped into dystopia, the world outside overwhelmed, and a battle-world mecha ditched outside of the home of his longtime friend. His school has been converted into a base of operations for the United Nations, an organization facing imminent defeat against mysterious aliens known as BETA. What’s most striking about Unlimited is the perspective of Muv-Luv’s cast. In the apocalyptical context, the personality of each person remains largely the same, save for the cataclysm triggering certain qualities, making for an intriguing character study. Thematically, the onset of annihilation shifts the tone from playful to predominantly somber, with the occasional respite prohibiting the story to be too disheartening. 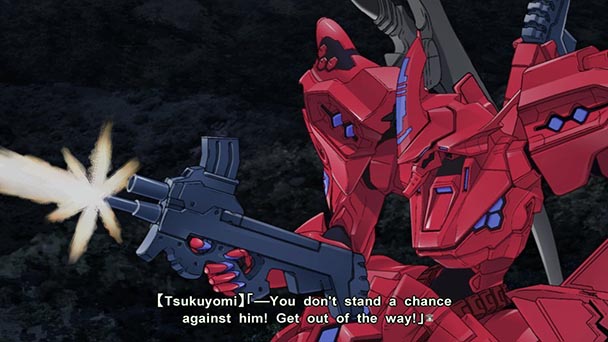 Alternative begins several years before Unlimited, with Takeru waking and discovering that the events of the previous games were a seemingly a dream. But exploration raises concern, as the world is seemingly on track to replicate the catastrophic events. Here, Muv-Luv flirts with the notion of alternative realities, with the protagonist accurately aware of the events of Unlimited, and seemingly has the physicality that was nurtured through the second arc. And while, Takeru assumed his preliminary rank, it’s fascinating to watch the character driven to stop a forthcoming disaster, and how small behavioral changes begin to affect the larger events unfolding around him.

But that’s not to say that Alternative channels the serio-comic time-loop of 2014’s Edge of Tomorrow. Tonally, the game is much closer to All You Need is Kill, the novel which served as source material for the Tom Cruise film. Here, Alternative delves deeper into the events, exploring the stimuli behind actions and surveying their ramifications. It’s a much more contemplative and ultimately somber work compared to its predecessor, interspersed with moments poised to give the tear ducts a thorough flushing. 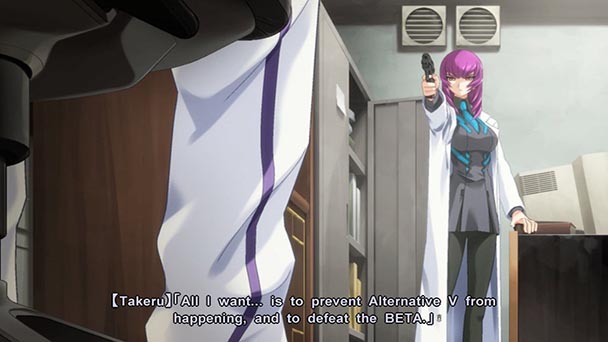 This time out, there are fewer decisions to be made by players, and the selections only have a marginal effect on the conclusion. But that’s a minor blemish and is counterbalanced by Alternative’s other virtues. World-building is especially strong here, with detail that’s devoted to militaristic elements, endowing a sense of authenticity to the proceedings. Even more importantly, the game offers one of fictions best deconstructions of the hero mystique, as Takeru confronts his not only his limitations but also his motivations. Despite, or perhaps because of the investment of time in Muv-Luv, the pay-off here is dumbfounding, and you’re unlikely to find a visual novel series that packs as much of a punch.

Muv-Luv Alternative was played on the Vita with
review code provided by the publisher.

Muv-Luv Alternative
Platform: Vita, previously on PC
Developer: âge/ixtl
Publisher: PQube LTD
Release Date: June 14th, 2018
Price: $39.99 via the PlayStation Store
Muv-Luv (Vita) Alternative
In contemporary media, commercial success and artistry are inescapably intertwined. Developing a lucrative, long-term property is just as important as the actual storytelling. As evidenced by the output of Hollywood, book publishers, and the game industry, sequels and spin-offs are ubiquitous. As such, audiences have developed a certain set of expectations when it comes to a follow-up or off-shoot. Habitually, these efforts feel complacently derivative, reiterating on themes, visual styles, and motifs with only negligible variation. Sequels are modern entertainment&rsquo;s version of fast food- quickly consumed, scarcely analyzed, and expected to be habit-forming. Which makes the Muv-Luv visual novels so&hellip;

Summary : A read through the original Muv-Luv is obligatory before undertaking the fury of gut-punches that Alternative has in store for players. Overlook the slightly outdated polygonal hair, allow yourself to be immersed in Muv-Luv, and you’ll discover one of the greatest and most emotionally moving stories in any medium.