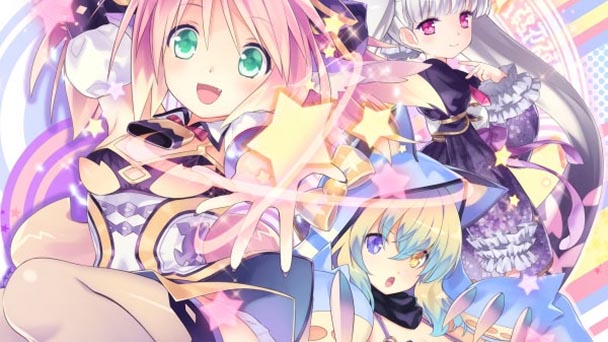 2014’s Monster Monpiece garnered attention when publisher Idea Factory International was obligated to omit eighteen card images for the stateside and European releases. While some rancorously objected to the edits, this was a necessary evil, as console software licensing has a tradition of prudency. As such, it wasn’t surprising when the next game in the Genkai Totsuki series, Moero Chronicle, wasn’t identified for localization aboard. But between the tide of console and portable ports on PC, and Steam’s independence from the ESRB’s rating system, Moero’s migration to Windows-based machines was due.

Given developer Compile Heart’s persistent fondness for fan-service, the game’s sub-text might be unexpected. A quick prologue introduces players to lead protagonist Io, as he’s caught in the middle of a bout of male dissonance. After being called a pervert as a prepubescent, Io struggles with the enticement of females. To make matters worse, the incident weight on his interactions with women, turning simple small talk into awkward affairs. 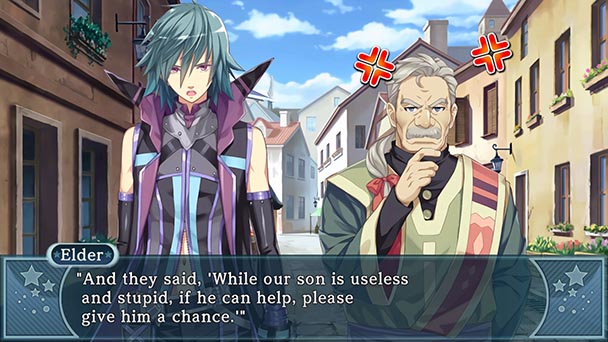 Given the lead’s general laziness and initial indifference toward any type of actualization, it would seem as if Compile Heart are trying to identify with their otaku demographic. But for far too long in Moero Chronicle, Io borders on the wretched, persistently whining and lacking any intention to contribute to the community around him. As such, it’s hard not to identify a dialectic at play. Compile Heart’s fans probably share Io’s lascivious nature, and will likely be amused by the game’s combat system- built around a metaphor for ejaculation. But there’s also a moralistic tone, as if the developer wants players to experience something more than mere lust in their own lives.

Which might seem slightly odd for a thirty+ hour dungeon crawl that centers around collecting monster girls by petting and poking them. To a lesser extent, the game’s focus on a human village surrounded by outposts of monster girls gone mad is just enough impetus to drive the action. But some players might want a bit more substance from the proceedings. On the upside, there are some amusing interactions between Io, and his childhood friend, a monster girl named Lilia. Additional levity stems from the inclusion of Otton, a pink seal with a serious panty fetish. 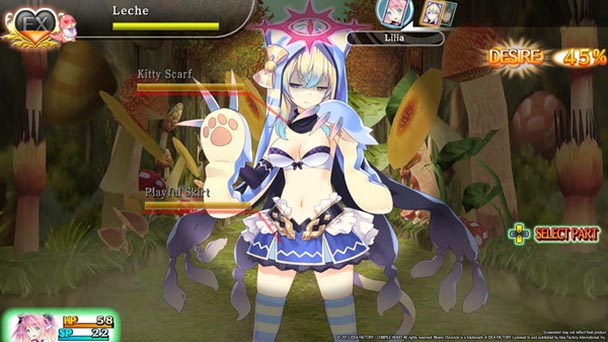 Beyond visual novel-style interludes between Chronicle’s characters, a significant portion of playtime will be spend reconnoitering the game’s labyrinths. Here, the game recalls the Etrian Odyssey series, save for the requirement for cartography. Instead, Moero fill in the on-screen map as you move down corridors, finding the occasional treasure chest, switch that needs to be triggered to access new areas, or the sporadic save point.

Naturally, combat is frequent and quite often unexpected, as stepping on a grid title throws a throng of enemies at the adventuring party. Skirmishing with basic enemies is rooted in DRPG rudiment, as players take turns trading blows with a selection of imaginative beasts, guided by a turn order indicator exhibited at the top of the screen. As mentioned, Moero Chronicle’s battle system centers around maximizing excitement, with turns dedicated to accumulating ‘desire’, and ‘releasing’ it to power-up your monster girls. Much like life, allowing your desire gauge to overflow can lead to a humiliating and even precarious situation, where you face an extending ‘calm time’ which enfeebles any attacks. Save for a color-based affinity system applies to auras, combat shirks complication, ensuring Chronicle remains accessible. And with four different difficulty settings and a challenge level that leans toward the painless, the game can accommodate even amateur adventurers. 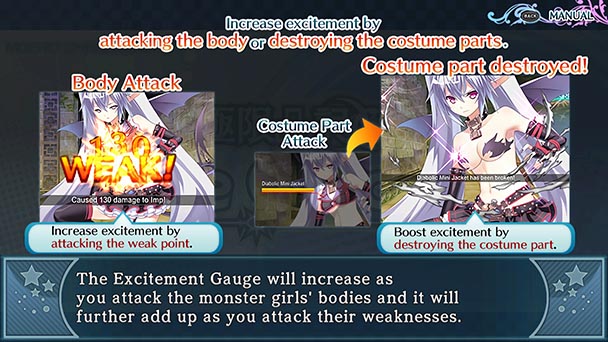 That said, the fights against the monster girls are one of the title’s showpieces, and are a bit more taxing. Here, you are required you target different pieces of clothing for each beastly beauty, and once the hit points for say a skirt or shirt, the whole thing explodes ceremoniously, producing moans and squeals from the girls. The goal is more than merely confronting modesty, as getting them to strip down to sexy undergarments eventually results in a rubbing mini-game that recalls Monster Monpiece’s masturbatory moveset. Yes, you’ll find, pet, and poke erogenous zones until the mon-girl peaks with passion, ultimately becoming part of your team. And while it all sounds completely carnal, there’s no actual nudity, making Chronicle more comical than sexy.

Yet, one thing that players won’t find amusing the current state of the PC port. Amidst a playthrough, the title crashed three times, and given the infrequency of save points, this caused a bit of frustration when progress was lost. One issue poised to affect a majority of players is the way Moero Chronicle handles controllers. Woefully, they’re not automatically recognized, and once in the option menu, the title recognized but refused to operate with a wireless Xbox 360 pad. Other small oddities exist, such as the title not allowing played to remap the ‘decide’ button or automatically targeting an enemy when playing with mouse control. 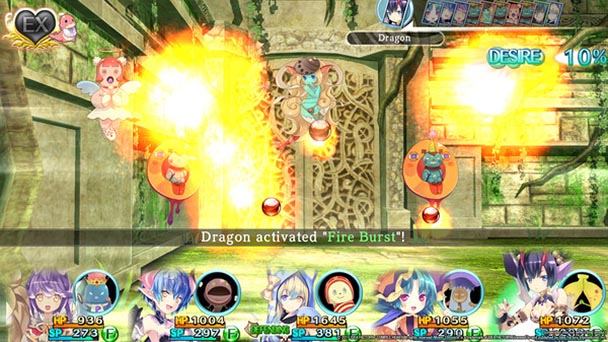 Save for these porting issues, Moero Chronicle remains visually alluring, channeling Compile Heart’s talents for tantalization. Offering output resolutions up to 1080p, the title scales its assets proficiently, with its compendium on mon-girls filling the screen with corporal, jiggling beauty. While the game’s Japanese voicework is expectedly consummate, the sound mixing is problematic, with a large schism between the volume of the opening song, MariC and A.m.u.’s “Dream Chronicle” and the dialog of the first chapter. Largely, the localization is adept, with the occasional awkward

While it’s gratifying to see a risqué romp like Moero Chronicle localized with any bowdlerizing edits, it’s also a bit disheartening to see the current state of the PC port. While Chronicle may not be revolutionary, it is an enjoyable, large relaxed dungeon crawl with a heaping supply of sexiness. With Compile Heart reminds us to keep our libidos in balance, I’d advise the same for expectations. 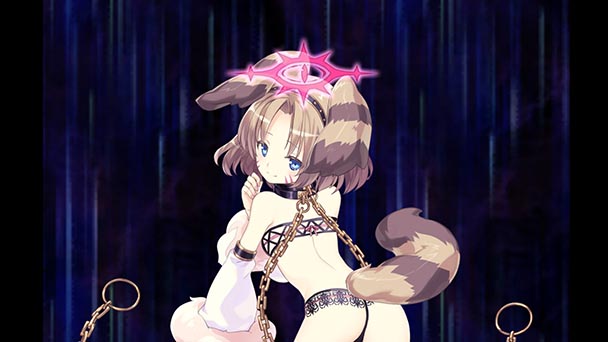 Moero Chronicle was played on PC with review code provided by the publisher.

Moero Chronicle
Platform: PC
Developer: Compile Heart, Idea Factory
Publisher: Idea Factory International
Release date: August 16th, 2017
Price: $19.99 via Steam, on sale for $13.99 until 8/23
Moero Chronicle review
2014&rsquo;s Monster Monpiece garnered attention when publisher Idea Factory International was obligated to omit eighteen card images for the stateside and European releases. While some rancorously objected to the edits, this was a necessary evil, as console software licensing has a tradition of prudency. As such, it wasn&rsquo;t surprising when the next game in the Genkai Totsuki series, Moero Chronicle, wasn&rsquo;t identified for localization aboard. But between the tide of console and portable ports on PC, and Steam&rsquo;s independence from the ESRB&rsquo;s rating system, Moero&rsquo;s migration to Windows-based machines was due. Given developer Compile Heart&rsquo;s persistent fondness for fan-service, the&hellip;

Summary : If dungeon crawling through a maze of monster-girl filled halls sounds like fun, Moero Chronicle delivers with plenty of playful puckishness on hand. The downside is that at present, the title feels like a slapdash PC port. Those mon-girls deserve better.