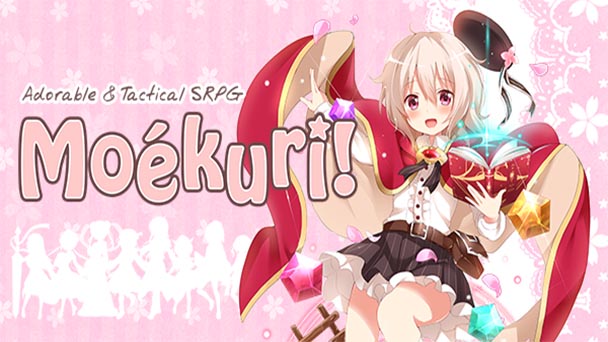 Game titles typical signal a specific element of a game, whether its tone or subject. But few monikers are as unabashedly expressive as Moékuri: Adorable + Tactical SRPG. Blending cute creature (abbreviated as Moé+kuri) collection with grid-based strategy, appeal is almost self-evident. And once players delve into the 418MB download, they’ll discover that each descriptor intermingles remarkably well. Gradually, gamers will lead a character into battle, who is capable of summoning and directing an ever-increasing roster of subordinates- that’s all wrapping up with a storyline told through visual novel-like imagery. As long as players can look past the visual simplicity of some component, there’s a heap of enjoyment to be found in Moékuri.

A prologue introduced players to Iruse and Nika, two best friends who are budding ‘masters’, each learning the intricacies of creature summoning. As with most fictional acquaintances, their personalities are remarkably divergent. Iruse is the perpetually good-natured girl, driven to find her missing mother and protect the village where she was raised. Unfortunately, her only lead is “Nursery Rhyme”, a tome filled with cryptic symbols that no one in the township can read. To keep the obedient lead in balance, Nika serves as impetuous, but dutiful friend, who might just have a crush on her comrade. 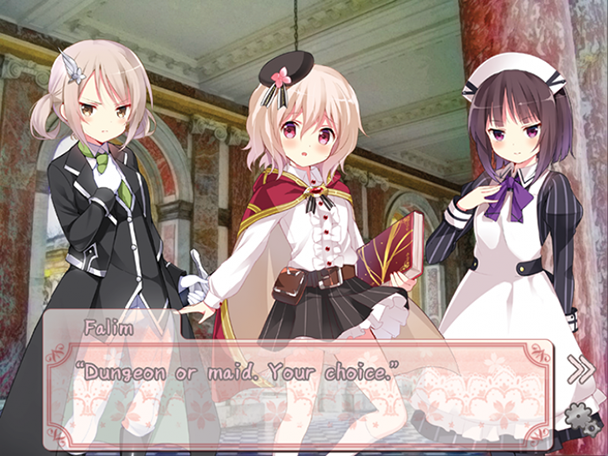 Smartly, developer MokyuuSoft keeps its heroes and villains from drifting into loquaciousness, extending just enough post-battle exposition to sustain the narrative. As such, the bulk of your time will be rightfully spent on the battlefield, where Moékuri’s stages take a refreshing autonomous approach to conflict. First players select from one of ten different classes, each of which inspires a different play style from the Healer’s capacity to tolerate team damage to the Evoker’s ability to increase elemental effects. Pleasingly, the game divulges the general difficulty level of each class, extending a star ranking so players accidently select an overly challenging class at the onset.

Although the game lacks a directed tutorial, a friendly skirmish between Iruse and Nika allows players to familiarize themselves with Moékuri’s fundamentals. Every turn, party members, both masters may do three things: move, use a skill, or summon. The first is handled proficiently, superimposing a purple hue on the field to show the range of movement. Skills are where offensive and defensive elements come into play- each accompanied by a convenient pop-up card displaying stats like the change of a critical, area of effect span, power, as well as synopsis of each ability. Finally, masters can summon creatures from the battlefield, although the subordinates can take a turn or two to materialize. And if any party members are close to death, you can even opt to return creatures to their masters, sparing a humiliation on the battleground. 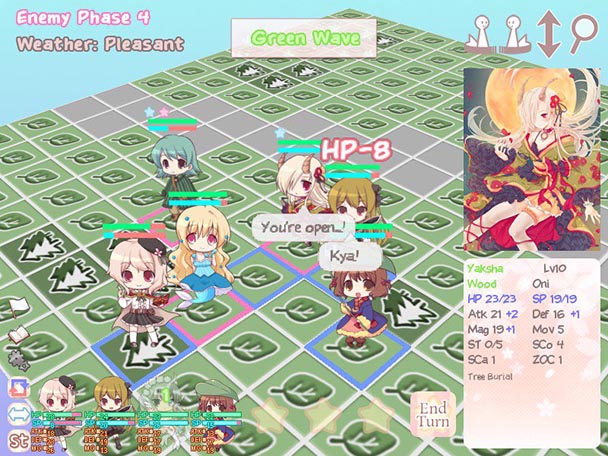 Subsequent stages, add to Moékuri’s level of complexity, adding the ability summon as many creatures are your spell points or party sizes allows (usually five). Similarly, players will later be able to use their skills to beckon familiars, with up to six of these assistants at a time. Unlike most SRPGs, where defeating an enemy just bestows currency and experience, players earn new creatures, which can be added to their master’s summoning schedule. Conveniently, parties can be saved and loaded, allowing players to construct their ideal fighting force. While players are in the post-battle screen, they can also learn new skills and abilities, further fortifying their team.

Not only does Moékuri extend a contenting collection of character art, with each having a distinctive battlefield appearance and accompanying art card, but individual kuri manage to feel different. Naturally, creatures fall into classic role-play archetypes, such as heavy hitters that are tragically delicate and healers that play an essential role, even if their offensive output is restrained. That said, there is a refreshing range to ways Moékuri can be conquered, whether players opt for a balanced team or wish to win with an overpowered ability. One of my favorite tactics involved a character whose skillset transformed the terrain into a forest element, giving my green party a distinct statistical advantage when luring opponents into their own zone. Impressively, there are a myriad of other tactics between the games selection of classes, elementals, terrain types, buffs and debuffs. 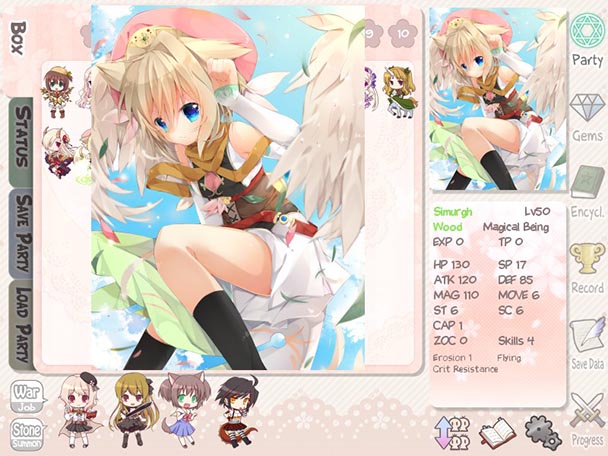 Despite Moékuri’s adorable appearance, there’s a lot of complexity to combat. Initially, players might assume that the title’s tactical variables are limited, with players not having to worry about the direction a unit is facing, or the absence of team attacks by adjacent allies. But stick with it and you’ll soon discover that the title can feel like a high-level wargame, given the number of simultaneous stats in play. But, in the long run, that’s also what gives the game’s its legs, with the game’s campaign capable of being tackled through a multitude of different methods.

Aesthetically, the game occasionally transcends its doujin origins. The aforementioned character art is undeniably attractive, with gorgeous spritework and portrait cards. The game’s soundtrack sporadically converges on the exceptional, with a variety of melodious offerings across the expositional, battle, and post-battle components. Likewise, the inclusion of Japanese voice-acting helps bring Moékuri’s masters and creatures to life. Some might take issue with the visual simplicity of the battlefield however, with terrain types articulated through icons rather than a rendered art style. 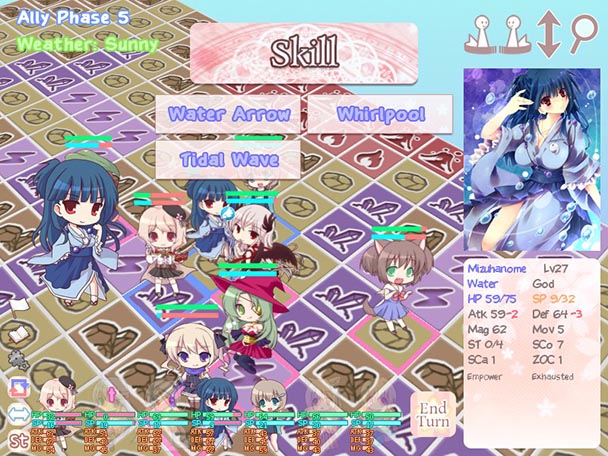 Moékuri: Adorable + Tactical SRPG is the rare game with a title that divulges what exactly is store for players. Beyond the lure of an army of over charming characters, Moékuri truly makes good on its promise of strategy, offering autonomy across campaign and free-battles. And given the game’s diminutive footprint, there’s little reason why MokyuuSoft’s engaging title shouldn’t earn a permeant space on your hard drive.

Moékuri: Adorable + Tactical SRPG was played on PC with review code provided by the publisher.

Moékuri: Adorable + Tactical SRPG
Platform: PC
Developer: MokyuuSoft
Publisher: Culture Select
Release date: December 16th, 2016
Price: $11.99 via Steam, currently on sale for $9.99 through 1/2/2017
Moékuri: Adorable + Tactical SRPG review
Game titles typical signal a specific element of a game, whether its tone or subject. But few monikers are as unabashedly expressive as Mo&eacute;kuri: Adorable + Tactical SRPG. Blending cute creature (abbreviated as Mo&eacute;+kuri) collection with grid-based strategy, appeal is almost self-evident. And once players delve into the 418MB download, they&rsquo;ll discover that each descriptor intermingles remarkably well. Gradually, gamers will lead a character into battle, who is capable of summoning and directing an ever-increasing roster of subordinates- that&rsquo;s all wrapping up with a storyline told through visual novel-like imagery. As long as players can look past the visual simplicity&hellip;

Summary : Moékuri: Adorable + Tactical SRPG is destined to delight fans of strategy gaming, as they collect cute creatures in an effort to build the ultimate moé militia.