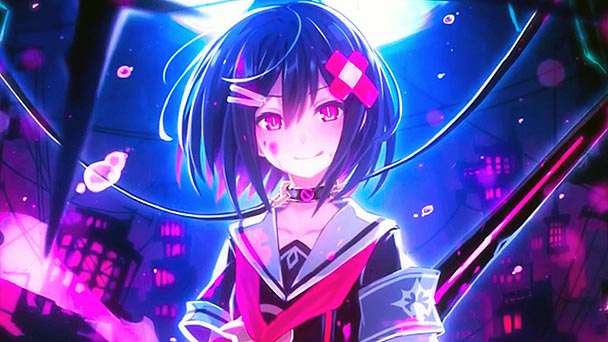 Following the success of 2010’s Hyperdimension Neptunia, developer Compile Heart’s output drifted toward the formulaic. Beyond a structure split between visual novel-based storytelling and turn-based combat, the Toshima-ku based studio integrated a copious amount of fan-service into their games. As such, subsequent entries in the Neptunia series, as well as titles like Mugen Souls, Monster Monpeice, and Moe Chronicle implanted titillation into their plotlines, typically obliging a trip to the onsen for some steamy cavorting.

But last year’s release of Mary Skelter: Nightmares, the developers seemed fearful of creative atrophy, and the sense of disappointment that accompanies platitude. Beyond the near-obligatorily mini-game that you probably wouldn’t want to be caught playing on public transit, Nightmares was Compile Heart allowing their imaginations to run wild. Merging everything from famous fairy tale characters, captivating combat mechanics, and dungeon exploration, it was easily one of the best PS Vita titles of last year. Fortunately, Ghostlight have given the game a competent PC port, permitting players without Sony’s portable to enjoy this creative dungeon crawler. 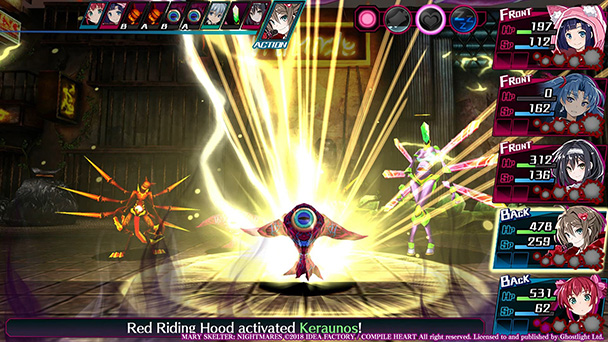 The typical Compile Heart game spends a protracted amount of time establishing context. But here, the stimulus is wonderfully succinct, with text and voice over depicting a calamity that devastated a nondescript city, creating a giant abyss in the middle of the metropolis. Sprouting up from the chasm is a towering spire, known simply as Jail. It’s here, that Nightmares introduces its leads, Jack (of Beanstalk fame) and Alice, who trades the spectacle of Wonderland for confinement and daily torture. 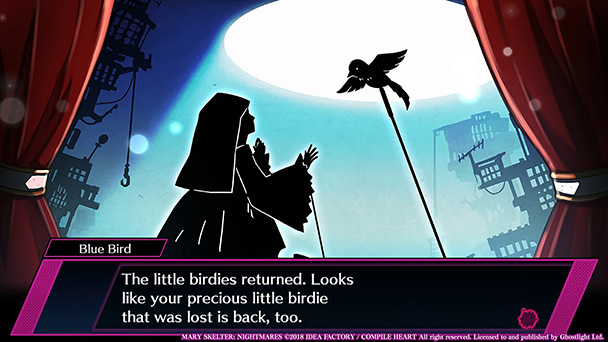 Another positive attribute is Compile Heart’s reluctance to rely on archetype. While the additional Blood Maidens and recruits you’ll meet seem to have prototypical personalities, exposition allows each to develop, giving way to some gratifying relationships between the cast- especially if Jack engages in some social development with the Maidens. As such, it’s satisfying to see Nightmares’ versions of Sleeping Beauty, Rapunzel or Kaguya, witnessing the game’s spirited deviations from classic folklore and the gradual surmounting of fears or weaknesses.

An even larger divergence from formula is rooted in the game’s setting, which embodies a living entity. More than just offering an assortment of fairy tale-based milieus, the Jail takes on corporeal qualities, exhibiting hunger, lust, and even a need to rest. Shrewdly, attempting to satisfy these needs is rarely required. But sacrificing foes to appease its appetite or discovering erogenous zones can pay death-offsetting dividends, across dungeons that feel persistently perilous. One of Mary Skelter’s most salient moments is when players strike at each living labyrinths’ heart, and hearing the object scream in agony. That’s even creepier than the eyeballs lodged in dungeon walls, who distrustfully watch your every move. 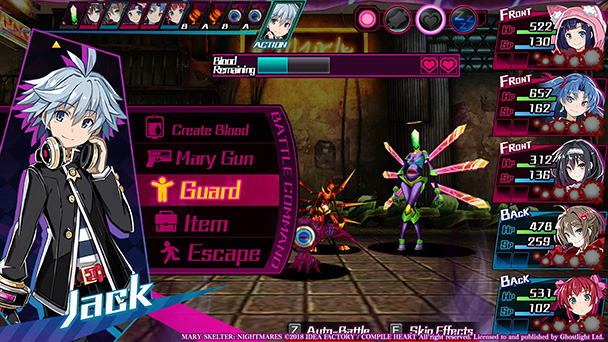 Attacking the heart is necessary before confronting the game’s Nightmares, who resist defeat until player’s have quashed the core. These hulking entities roam across each locale, with the screen’s border giving a crimson-colored indication of their approach. Appropriately, there’s a sense of apprehension when this occurs, as it’s possible for your party to become trapped in an alcove, allowing these beasts to obliterate your adventuring party. And even when the team is on the offensive, using a contrivance placed around a dungeon to soften up the adversary, these encounters are exponentially more different than the confrontation with subordinate foes. As such, players can expect to do some level grinding, even on the lowest of Nightmares’ three difficulty levels.

Largely, the tedium of tackling lesser creatures would have been detrimental if it wasn’t for Mary Skelter’s engaging combat system. With turn order determined by the agility of each opponent, battles might be rooted in DRPG tenet, but a multitude of play mechanics ensure variability. During encounters, characters have a blood meter which gradually rises with each overkill attack. Once the gauge reaches capacity, the Maidens enter Blood Skelter Mode, which elevates their damage output and endows them with a set of formidable skills. But any incurred damage can turn the meter dark, potentially pushing the girls into Massacre Mode, where they will brutally attack aggressor and alike. In execution, if just one member loses it, it’s a tangible threat. When multiple maidens enter Massacre Mode, it’s almost an inevitable game-ending situation. 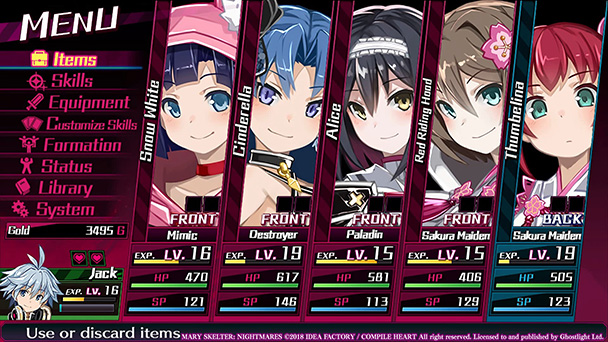 Fortunately, there are ways to circumvent this calamity. Maiden can opt to lick any accumulated blood from party members, earning a health bonus in the process. Alternatively, they can also employ Jack, who is Mary Skelter’s resident support character. As a Blood Youth, he can’t attack foes directly, but he is capable of guarding one of the girls or using his own blood to purify a manic maiden. Naturally, there’s a limit of how many times we can tranquilize an ally with his bodily fluids. Use the ability too often and he is apt to pass out from exhaustion.

That means Mary Skelter delivers a bit of metaphorical ejaculation. And while the depiction could have probably been played up for a cheap laugh, the developers keep it rather implicit. Fundamentally, there’s where Nightmares shows advancement for Compile Heart. Yes, there’s still fan-service to be found, but it doesn’t always feel so overtly juvenile. Given the main character’s literary ancestry, it’s not surprising to see the title evoke the symbolism of the lurid folktales that would eventually be associated with the Grimm Brothers works or the allegory of Stoker’s Dracula. 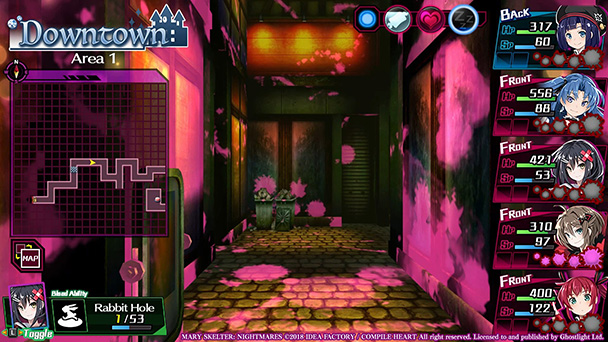 While Compile Heart’s art for its visual novel-like exposition is consistently high, occasionally combat can look inferior. Delightfully, that’s not the case with Mary Skelter. Not only are enemy rendered in an attractive amount of detail, the exchange of blows is rendered with a fluidity uncommon for portable DRPGs. Socially, the game’s soundtrack is inspired, extending baroque instrumentalization that also provides an evocative feel, and adheres to the character’s literary origins. While the sole variable offered to PC owners is resolution selection, there’s little need for customization. Adeptly, the game offers either mouse and keyboard support, and maintains a nimble framerate at all times. Although persnickety players might notice the upscaled asset quality, it’s easy to forget that this was a Vita game as you’re skulking through dungeons.

Even players well-acquainted with dungeon crawls or Compile Heart’s recent efforts are likely to find Mary Skelter: Nightmares to be a refreshing divergence from formula. Sure, the game’s basic structure adheres to DRG tenets, but an impeccable synthesis of story and mechanical novelty ensures a sense of enjoyment across the forty-hour journey.

Mary Skelter: Nightmares was played on the
PC with review code provided by the publisher.

Mary Skelter: Nightmares (PC) review
Following the success of 2010&rsquo;s Hyperdimension Neptunia, developer Compile Heart&rsquo;s output drifted toward the formulaic. Beyond a structure split between visual novel-based storytelling and turn-based combat, the Toshima-ku based studio integrated a copious amount of fan-service into their games. As such, subsequent entries in the Neptunia series, as well as titles like Mugen Souls, Monster Monpeice, and Moe Chronicle implanted titillation into their plotlines, typically obliging a trip to the onsen for some steamy cavorting. But last year&rsquo;s release of Mary Skelter: Nightmares, the developers seemed fearful of creative atrophy, and the sense of disappointment that accompanies platitude. Beyond the&hellip;

Summary : All too often, there’s a schism between a director’s ambitions and actual execution. But Mary Skelter: Nightmares’ creativity is fantastically realized, extending a lengthy expedition that’s welcome on PC.