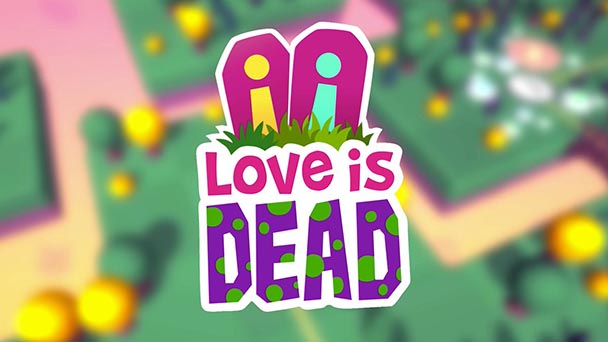 Don’t worry, Love is Dead isn’t nearly as nihilistic as the title implies. Sure, the game’s introduction seems thoroughly bleak at first, with the demise of its amorous couple, the commencement of world calamity, and the concern of two mislaid pets. But the game envisages Armageddon like something out of an old Chuck Jones’ Wile E. Coyote and the Road Runner cartoon, where falling anvils and pianos precede disaster. A light-hearted tone is also cultivated by abstract visuals, with lovers and surviving humans not rendered not as photorealistic humanoids, but icons that resemble the playing pieces in The Game of Life. If that wasn’t enough to quell any fears of a downhearted vibe, Love is Dead also assures a happy ending.

Here, hope is rooted in the cerebral, as both you and your significant other died with your brains intact. Largely, Love is Dead’s two-hundred plus levels center around the warmth of reunion. Across each stage, the two are separated, establishing a goal of having the two symbols share the same grid square. After a brief moment of congratulations and a sliver of exposition, the two are estranged again, beginning the cycle anew. The beauty of all this is how play cleverly contradicts the title. Despite mortality, and forces constantly splitting the couple, they persist to remain together. ‘Love isn’t dead’, declares developer Curiobot, but it is a lot of work. 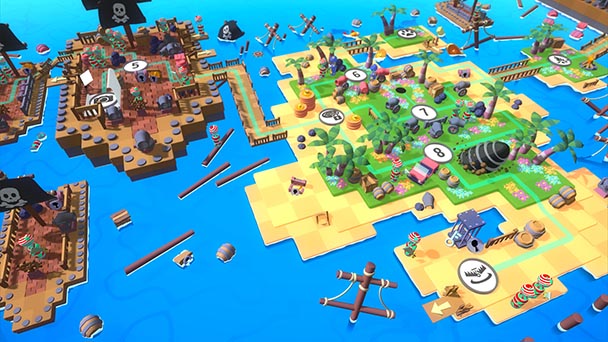 Fortunately, that work can be a lot of fun. Using either a controller or a keyboard, players move each lover in four directions, making the title feel like Frogger or Q*Bert on an expansive playfield. Wisely, Curiobot doesn’t squander your time making you play through a tutorial, allowing experimentation and a strategically ambiguous phrase or two guide the journey of reunion.

Unlike the aforementioned arcade games, Love is Dead has a wealth of different mechanics to discover across its seven-world trek. Initially, you’ll encounter skull-adorned tiles that disappear after being stepped on. Soon that’s augmented by red skulls which trigger the gradual erosion of any neighboring red tiles. Next, pressure switches are added into the mix, as well as the requirement of turning wandering humans into zombies before the stage can be completed. When playing individually, you can freely switch between lovers, progressively bringing the protagonists together. With a local partner, you play at the same time, which is a pleasing test of patience for partners. Unfortunately, there’s no online play, which would have great for long-distance pairings. 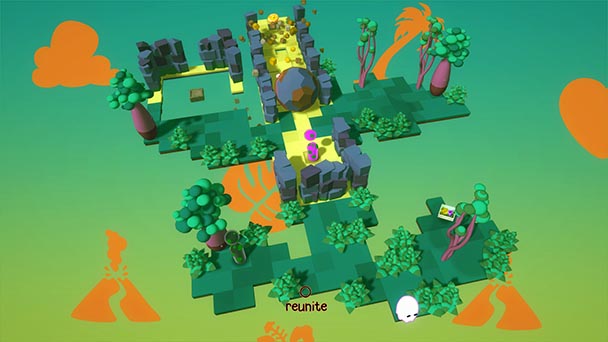 Likewise, the variety of enemies grow as you progress. Originally, there are encircling ghosts that can typically be easily avoided. But then, Love is Dead adds creature like roving zombies and coffin that release the undead when you draw near. It’s clear that the developer understand that tedium can threaten the enjoyment of straightforward puzzle game. To combat this, they’re always throwing something new at you in each stage, whether it’s an unseen tile type, enemy, or just requiring new types of interactions with familiar elements. This helps contribute to the ‘just one more stage’ feeling that vitalizes the game.

Love is Dead mixes things up further, with tranquil levels that move the story along or give you a timed challenge. Additionally, there’s bonus objectives in levels, from acquiring a pancake that deliberately placed in remote part of the playfield, or a photograph positioned to thoroughly test your thinking skills. Agreeably, the pancake even acts like an extra life, allowing you to continue after making an errant move instead of having to start the stage over. 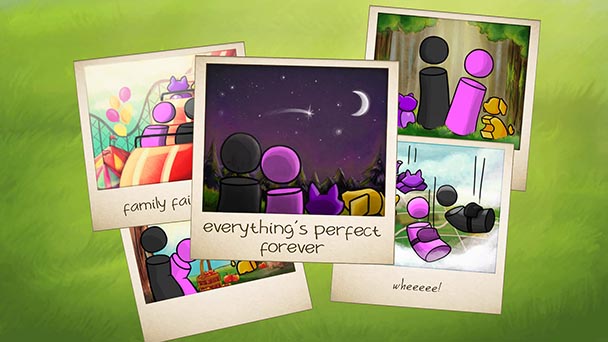 While some might bemoan the game’s decision to use abstract visuals, others might find favor in the design decision. Largely, Love is Dead’s stages are clean, permitting players to easily identify strategies for success on each level. When characters are threatened to become obscured by an element of the environment the game makes pieces transparent. When coupled with a control system that habitually doesn’t allow you to make obvious mistakes, like pushing the protagonist over an edge, when you do make a misstep it feels like it’s your fault, not the game. While the title’s low-key soundtrack makes for a welcome addition, some of the sound mixing needs work, with the sound of touching a human a bit too loud.

Screenshots, descriptions, and even video don’t really convey Love is Dead’s charms. This is an overwhelming solid indie title that you really have to experience through play. Hands-on interaction allows you to admire the mix of creative mechanics, engaging level design, and even some light storytelling that raises Love is Dead above many of its puzzle-oriented peers.

Love is Dead was played on the PC with
review code provided by the publisher.

Love is Dead
Platform: PC
Developer: Curiobot
Publisher: Armor Games Studios
Release date: May 31st, 2018
Price: $11.99 via Steam
Love is Dead review
Don&rsquo;t worry, Love is Dead isn&rsquo;t nearly as nihilistic as the title implies. Sure, the game&rsquo;s introduction seems thoroughly bleak at first, with the demise of its amorous couple, the commencement of world calamity, and the concern of two mislaid pets. But the game envisages Armageddon like something out of an old Chuck Jones&rsquo; Wile E. Coyote and the Road Runner cartoon, where falling anvils and pianos precede disaster. A light-hearted tone is also cultivated by abstract visuals, with lovers and surviving humans not rendered not as photorealistic humanoids, but icons that resemble the playing pieces in The Game of&hellip;

Summary : Sure, Love is Dead’s leads might be lifeless, but this clever indie is anything but a shambling corpse. It's a creative experience where nearly every stage brings something new.