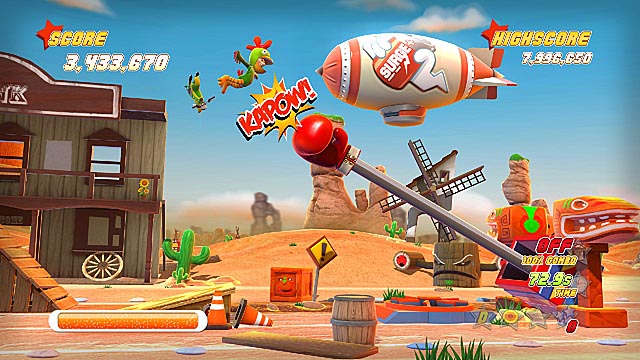 What is the concept? Games which try to synthesize an assortment of popular mechanics often end up becoming less that the sum of their parts. Fortunately, that tenet doesn’t hold true for Joe Danger: Special Edition– a game that deftly combines the precarious physics-based biking of Trials HD with the outrageous stunts which catapulted early Tony Hawk titles to critical acclaim. While retaining the cartoonish charm and addictive gameplay of its PS3 predecessor, the XBLA iteration of the game delivers enough additional polish, tweaks, and additions to propel Joe Danger headfirst into must-purchase territory.

Attempting a career revival after a disheartening crash, each stage tasks Joe the daredevil with an increasingly complex collection of crowd-pleasing maneuvers. From collecting every single blue star, nabbing floating letters which spell “danger”, crossing the finish line before a time-limit expires, or even stunting through an entire level, the title is teeming with objectives. Although players can accomplish all of these challenges in a single run (earning a modestly monikered Pro Medal in the process), the game’s forte is its freedom. Completion of a few undertakings is often enough to open subsequent stages- allowing players the choice of moving forward or stalwartly sticking around until every last award has been earned.

Once players persevere through Joe Danger’s robust main campaign, they’ll likely find that they have the requisite skills to surmount the imaginative Lab levels. These twenty-five supplemental trials evolved from the developer’s efforts to hone the title’s razor-sharp handling, and offer some of the most masochistic moments for players hoping to squeeze every achievement out of the game. 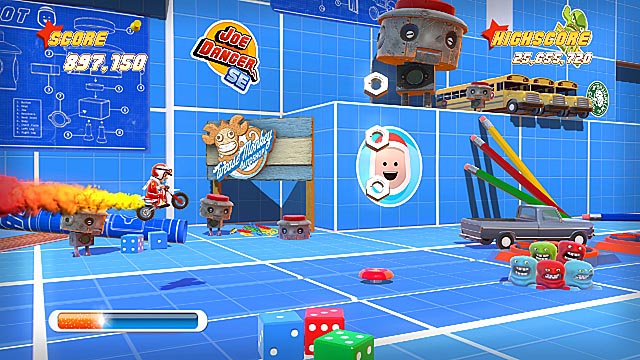 Would I enjoy the game? Long before Joe Danger jumps to expletive-ejecting heights, the title offers a genial ramp of increasing difficultly, steadily requiring mastery of a steadily increasing skillset. For obsessive gamers, the title’s catalog of gratifying challenges are capable of sustaining hours of enjoyment. With end-of-level leaderboards which assess a player’s score against their friend’s list, determined gamers are certain to find delight in Danger’s competitive vibe, as well.

Beyond a multitude of single and multiplayer challenges, the game’s greatest virtue is its design philosophy. One example- instead of forcing players through a tutorial for the title’s construction set, players learn the fundamental of level design through puzzle-like elements embedding into the main game. Here, sections ask players to removes an obstruction or drop a well-placed ramp so Joe can reach the finish line. This type of playful attitude seem to permeate through Joe Danger, as if the designers constantly contemplated how they could tweak the title to make it even more enjoyable. Consequently, gamers who delve into the title will discover a plethora of playful touches- like alternating from wheeie to endo in order to maximize their scoring combo. 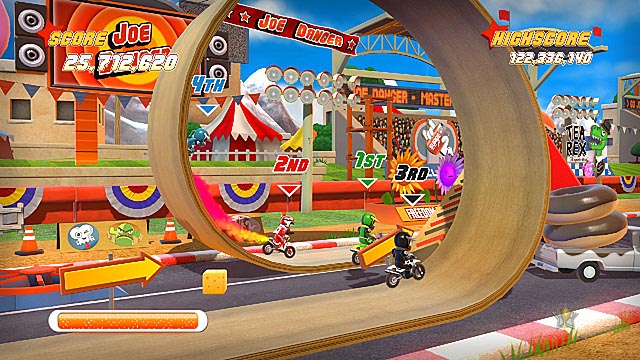 What are the game’s strengths? Remarkably, Joe Danger’s divergent mechanics- racing, platforming, stunting, and restrained puzzle elements, all meld into a synergistic whole. As such, this variety helps fuel the title through its 75+ level trek, overcoming the monotony which is common to many simpler, physics-based, vehicular amusements. Aesthetically, the game exhibits a fastidious amount of polish. With quicker load times, improved anti-aliasing, and an unwavering framerate, the title subtly outshines its keenly-coded predecessor.

What are the game’s weaknesses? Building on the established aptitude of the PlayStation 3 version, Joe Danger: Special Edition has no debilitating flaws, although a few blemishes do exist. Although players have the ability to share their custom tracks with people on their Xbox Live friends list, it would have been pleasing to grab creations from the fan-base at large. Additionally, a few more music tracks and sound samples would have bolstered the game’s aural delivery. 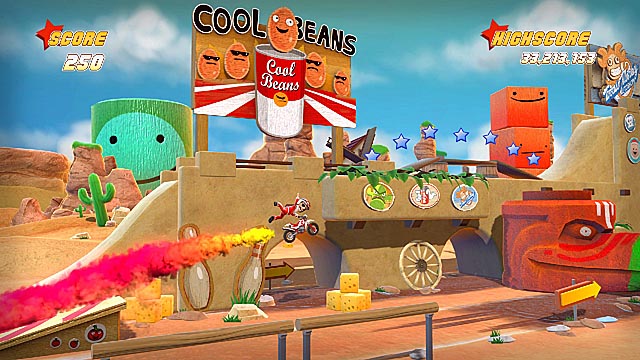 Is it worth the money? While Joe Danger’s fifteen dollar price point might prohibit a spontaneous purchase from frugal minded gamers- with at least twelve hours to content to keep players stunting, racing, and vying against online and split-screen competitors, the title delivers an impressive amount of content. Throw in a bit of free, holiday-themed DLC which supplies a markedly divergent physics model, and Danger might be the one downloadable title players shouldn’t overlook this season.

A copy of Joe Danger: Special Edition for the Xbox 360 was provided by the publisher for review.