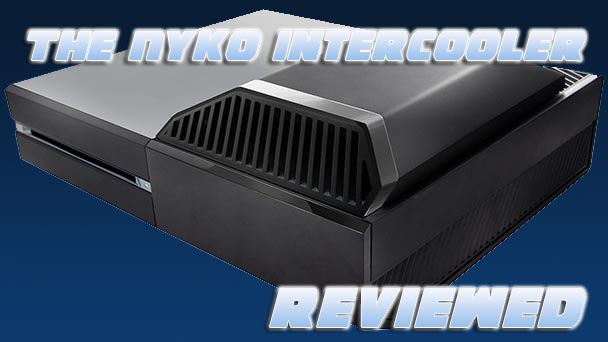 There are a number of rational reasons why console owners should be concerned with the running temperature of the hardware. Ever hear a console fan roar just as a game starts flaunting visual grandeur? Then you witnessed a system fan revving up, in an attempt to cool a sweltering graphics processing unit. Naturally, now-gen consoles, capable of moving around an unprecedented number of polygons, seem particularly prone to heating up as their GPUs toil in an effort to provide 1080p/60fps output. Then, there’s Microsoft’s ‘red ring of death debacle’, where large quantities of Xbox 360’s stopped working, purportedly by an internally developed, heat-producing graphics chip, as well as inadequate soldering. Certainty, anyone spending at least three-hundred on a new console wants to ensure that their hardware enjoys a long, healthy life.

In an effort to keep internal temperatures moderate Nyko has created the Intercooler, a twenty-five dollar device that mounts onto the top of the Xbox One, in an effort to repel some of the hot air emanating from the system. Admittedly, the manufacturer might be facing an uphill battle. For many, the moniker “Intercooler” remains stigmatized by the company’s inaugural device, which allegedly created more harm than good when attached to an Xbox 360 console. Reports claimed that the USB-powered device was a power hog, with the additional current draw of the peripheral producing even more heat. Microsoft wasn’t keen on the cooler either, considering the fan an “unlicensed peripheral”, which voided warrantees. While subsequent iterations of the Intercooler remedied a number of design issues, many still feel these updates were little more than high-tech snake oil. 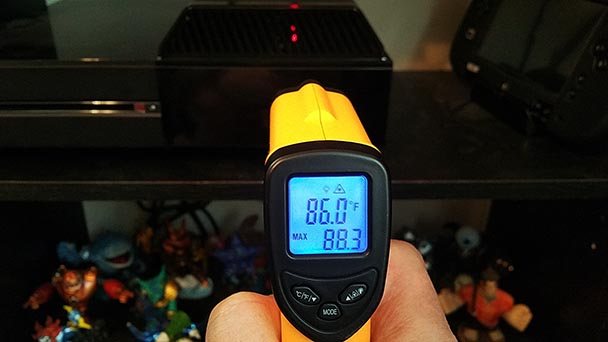 For the release of the Intercooler for the Xbox One we decided to empirically test the claim that the device “reduced console operating temperature”. Unsurprisingly, we faced a few obstacles. For one, we could measure the ambient temperature inside the Xbox One with the top on the console removed. While opening the Xbox One’s revealed substantial cool fan and temperature that would hover around 105 degrees after two hours of use (in a 78-degree environment), this wouldn’t be a practical test for the Intercooler, which rests atop the machine- drawing air up and pushing it forward. Instead we went for a slightly less accurate, then more equitable approach, using an infrared thermometer, and averaging the surface temperatures taken at the rear, and top-rear vents, as well as one of the USB ports on the back.

For consumers, installing the Intercooler is a task that takes less than ten seconds. Once the trapezoidal-shaped device is positioned on top on the Xbox One, a revolving knob locks the peripheral into place, with small plastic arms clinging to the vents on the top of the console. A rubberized USB cable provides power for the unit, offering just enough length to fit into one of the back ports. Once installed, the Intercooler activates once a certain temperature threshold is passed (about 85 degrees Fahrenheit). As much, the fan can run after the machine is turned off, and even if the room temperature is a bit tepid.  Fortunately, the unit is fairly quiet. While the whirling is noticeable, it’s fairly muted, and lacks the high-pitched whine often associated with rapidly rotating fans. 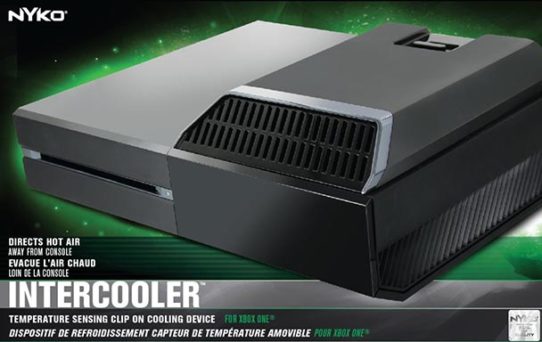 To assess Nyko’s claims, we measured temperatures after one, two, and four hours of continued console use, contrasting the readings with and without the intercooler. To compensate for room temperate, we ran the test of two consecutive days that had similar weather, running air conditioning to ensure parity. Temperature was measured using a laser-guided infrared thermometer held a foot away from each area.

Results
Expectedly, the Xbox One’s temperature rose steadily during use, as the internal fan worked to keep the console’s interior from getting too hot. Alone, the substantially-sized component does an admirable job, ensuring the One doesn’t overheat. With the Intercooler installed, temperatures were noticeable cooler, thereby validating Nyko’s claims. That said, the Intercooler’s impact wasn’t substantial, offering at best a three degrees difference on the outside, inferring a comparable cooling interally. As such, the peripheral is recommended for players who plan on using their Xbox One in sweltering environments: non air-conditioned spaces or rooms where the ambient temperature is elevated by a stack of powered-up electronics. Others can probably get by using the One’s standard cooling measures.

Xbox One Intercooler review
There are a number of rational reasons why console owners should be concerned with the running temperature of the hardware. Ever hear a console fan roar just as a game starts flaunting visual grandeur? Then you witnessed a system fan revving up, in an attempt to cool a sweltering graphics processing unit. Naturally, now-gen consoles, capable of moving around an unprecedented number of polygons, seem particularly prone to heating up as their GPUs toil in an effort to provide 1080p/60fps output. Then, there&rsquo;s Microsoft&rsquo;s &lsquo;red ring of death debacle&rsquo;, where large quantities of Xbox 360&rsquo;s stopped working, purportedly by an&hellip;

Summary : Nyko's Intercooler can help shave a few degrees from the interior of your Xbox One. But unless you're playing in an especially hot environment, the console's stand-issue fan should be able to keep things cool.