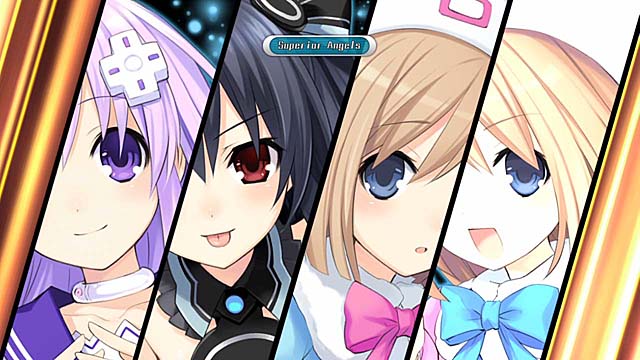 DesertEagle’s Take: Critics of the Japanese role-playing game often assert that the genre relies on clichéd storylines. Exception to this claim could be found in last year’s Hyperdimension Neptunia, a title which depicted a fanciful allegory of the seventh-generation console war. With humanoid versions of the PlayStation 3, Xbox 360, Wii, as well as the renounced Sega Neptune, teaming up to battle the scourge of software piracy, the concept was undeniably inventive and teeming with potential. Regretfully, the game’s clunky combat, bland exploration, and reliance on asset recycling negated the prodigious premise.

Although the recent release of sequel Hyperdimension Neptunia mk2 maintains its predecessor’s clever plotline and mends some of the game’s mechanics, the title still isn’t polished or robust enough to transcend its niche audience. Of course, players tantalized by impish dialog, ample-breasted moekko, and a rivulet of Japanese game industry references may be able to forgive the lack of refinement, savoring every bit of the game’s pandering charms. 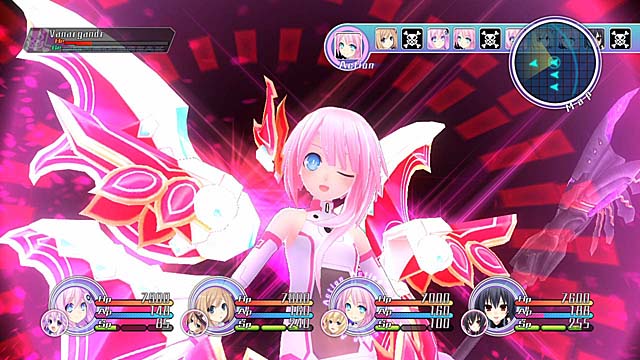 Set three years after the events of the first game, mk2 opens with the original heroines (called “Console Patron Units” or CPUs) held captive in the Gameindustri graveyard- a wasteland for discarded gaming devices. As such, it’s up to the detainee’s younger sisters to liberate the quartet, while striking another blow against the escalating tide of piracy. With allusions to the pervasiveness of software theft and the conundrums faced by a single-console landscape, the game offers interesting, if oblique, commentary. Those fluent in topics such as the Sony’s persistent battle against custom firmware will comprehend the references, but they’ll also likely wish the title had more of them. Too often, Hyperdimension Neptunia mk2 squanders opportunities for commentary on fetch quests and monster killing assignments.

Although the title’s “Chirper” component provides small doses of Twitter-esque interaction as well as the sporadic event leading to new abilities, items, or stat boosts, conversations rarely help develop characters or provide much industry reflection. Even an on-going cameo by Mega Man creator Keiji Inafune offers more non-sequitur than evaluative observation, which feels like a missed chance. Similarly, the title’s addition of item synthesis seems underdeveloped, since many crafted items can be purchased at the item shop with your copious bankroll of in-game cash. 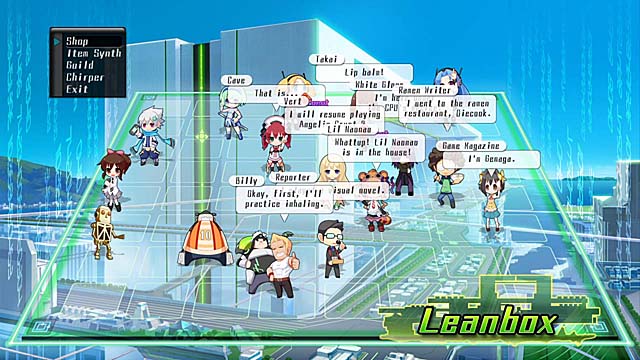 Fortunately, most of mk2’s other elements fare far better. The addition of the Guild consolidates quests, offering a fixed location for both receiving assignments and receiving reimbursement for completed errands. The title also renovates battles- adding the ability to move around the battlefield, as well as removing the woeful decision which left healing up to the game’s AI. Recalling Trinity Universe’s interpretation of combat, mk2 allows each character to distribute Ability Points toward guard breaks, heavy attacks, or rapid attacks on opponents. Deducing the ideal combination of strikes to vanquish each type of enemy is the key to success, with rewards players with Skill Points, which can be used on either special ability or to turn each combatant into devastating goddess form for a brief period. Save for clumsy enemy attack selection, fights are fast-paced and fun, although a bit of grinding is required to beat some of the game’s bosses.

Augmenting mk2’s competent combat is a multitude of customization options for the game’s collection of characters. Beyond stat-boosting weapons and armor, the title offers an army of aesthetic additions to tailor the look of each of the thirteen available party members. Once the assembly of adventures exceeds a quartet, gamers can selection characters to function as a support squad, offering a pleasing (and lifesaving) selection of passive abilities to the team. 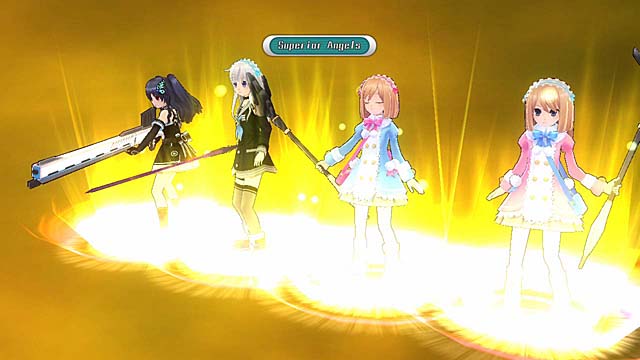 Visually, mk2 offers a diminutive improvement, offering pleasingly rendered three-dimensional models which replace the character portraits of its ancestor. Disappointedly, conversations are limited to two on-screen avatars, often evasively referencing a third, off-screen character. Equally disheartening is the game’s framerate; although mk2 never solicits quick reaction times from players, the title’s oft-choppy refresh rate can be unsightly. Like all of NIS America’s PlayStation 3 releases, the game’s dialog is available in Japanese or English.

Once all of Hyperdimension Neptunia mk2’s nuisances are compiled, players might dismiss the game as a lackluster effort. Yet, there’s an undeniable charm and persistent gratification that simmers just beneath the surface, delivering the occasional lascivious laugh or smile-inducing industry reference. With any luck, Idea Factory and Compile Heart will continue to enhance the series’ fundamentals, giving players an experience which truly lives up to the game’s captivating concept. 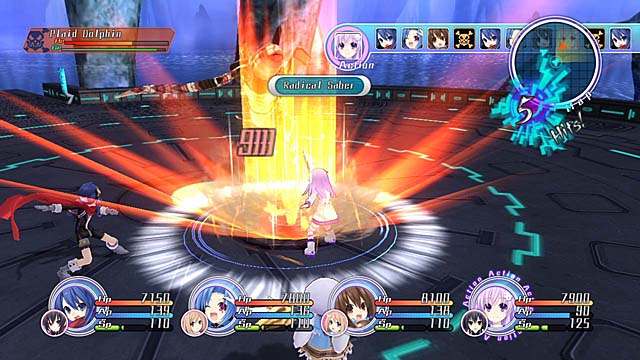 SeanNOLA’s Take: Sometimes a concept can carry a piece. Sometimes you end up with a disappointment like In Time. The concept behind Hyperdimension Neptunia MK-2 is refreshingly new and potentially biting, considering its target audience, but it unfortunately falls flat in every conceivable way possible once the introduction monologue finishes crawling across the screen. The concept of a JRPG that tells an analogous tale about the state of Japanese games is actually quite novel. Idea Factory makes no bones about where it stands on issues of piracy and the pessimism of the foreign press and how that is all killing the game industry. Within the opening moments of the game, I was sure I was in for something special. “Finally,” I thought “a JRPG that throws tropes aside in favor of commentary and fresh narrative!” Then the 14-year-old girls show up. To rescue their big sisters. Who are trapped in tentacles.

That more or less set a tone for the rest of the game. They set up such an interesting parti, then just send it out to die amongst a sea of pet names and innuendo. After the opening scene, they never really do anything with the universe they’ve created to make it discernible from any JRPG fantasy realm. The pirates are represented by generic monster manual foes and the foreign press is represented by “Judges,” who are essentially the same spooky black knights we’ve seen a million times before. The main cast, which are supposed to represent the “Patron Units” of handheld systems, have somehow created a vacuum in which they have even less personality than your standard moe tripe. The first time I saw a still frame image with independently animated CG breasts, I wanted to go back in time and slap myself for getting my hopes up. 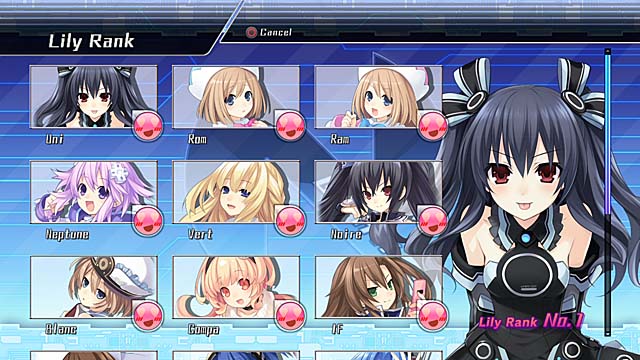 My personal vendetta for RPG tropes aside, mk2 is a technical mess. The framerate drops during most cut-scenes and dungeons, and these drops only get more frequent and sluggish as the game progresses. There is a confusing number of different interfaces, from pixeated world maps, CG paper-doll-style dialog scenes, a twitter-style town system and the aforementioned partially animated 2D breast montages. None of them ever really flow together to create a cohesive experience. What makes things worse is that everything seems proportioned as if it were on a PSP screen – dialog text is too large while other UI elements seem scrunched in order to save valuable screen space. I can dismiss it as a style choice, since this game is primarily about handheld systems, but I could never help but feel like I would rather be playing on a PSP. I can’t really point to a moment in the game and say “this moment is representative of the entire experience” because I feel like I spent just as much, if not more time watching conversations between children play out or perusing fake-twitter in search of an event message to advance the story as I did exploring dreadfully unremarkable dungeons in search of slimes.

Although 90% of the game is fairly snore-worthy, the combat system makes some attempts at strategy that piqued my interest. The turn-based battle system let’s you freely move each character within the environment before chaining together a series of basic attacks or unleashing power special attacks and character summons. Chaining certain attacks together against a particular foe can be more effective, but as you get stronger, you’ll find that most of your attacks will work just fine against anybody. There is a lot of subtle strategy in positioning your characters to unleash powerful attacks while trying not to leave them open to are effect attacks, and for the most part that keeps it from getting too dull when you’re fighting the same slime for the thousandth time. It also bears note that battles are the only time when the game runs smoothly. Special attacks are flashy and over-the-top, but never effect the flow or framerate. It really makes me wonder what was so difficult about rendering two people speaking to one another. 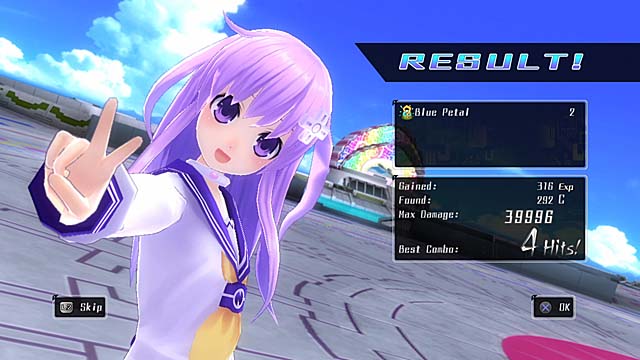 In the end, mk2 is incredibly disappointing, but still worth a look, if for nothing else than its attempt to do something new with the setting. My hope is that any nominal success that this franchise sees could open developers’ eyes to the potential of moving the genre in a new direction. I also hope that someone will read this and give me a million dollars, so I guess we’ll see if any of those play out in reality.