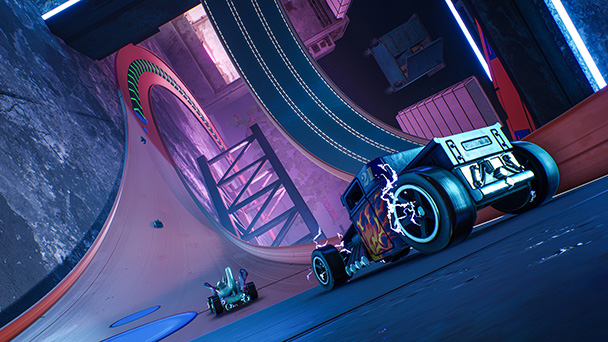 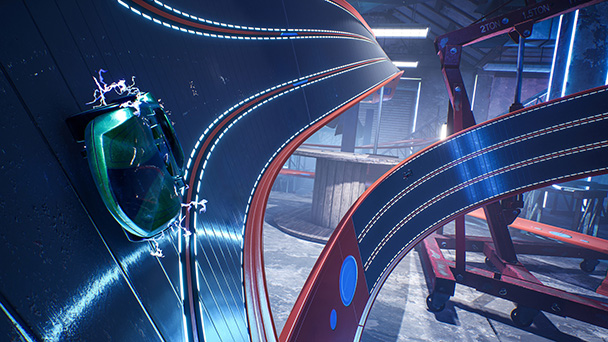 Although Forza Horizon 3’s DLC was admirable, the Hot Wheels brand hasn’t enjoyed a truly faithful interactive crossover. Sure, there have been a multitude of attempts to bring Mattel’s die-cast cars into game form. But often, the licensed games have focused predominantly on the racing, with players careering down those iconic, orange-colored tracks and through the occasional loop. Most titles neglected to emulate the excitement of unboxing a mail-In Mystery Car or opening up a Mystery Model. Efforts at honoring the toy line’s 53-year legacy have been uneven as well.

Putting the property in the hands of Milestone, the Milan-based studio behind recent entries in the Ride and MotoGP franchises was an intriguing decision. While Milestone can craft two-wheeled vehicular sims, their experience with creating pick-up-and-play racers is more limited. (2017’s Gravel was their rather unremarkable exception, which focused on off-road competitions.)

Happily, Hot Wheels Unleashed’s racing is accessible, offering the kind of arcade-style racing where a podium finish is possible the first time you pick up a controller. Like any respectable Hot Wheels adaptation, there’s a track editor which mimics the experience of setting up a circuitous track in your basement.  There’s even some recognition of Hot Wheels history and the thrill of opening a blind box. But woefully, the latter two tend to commodify the nostalgia we have for those 1:64 scale, aluminum-zinc alloy hot rods. 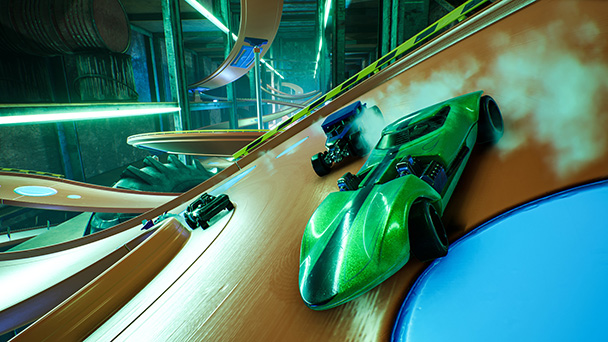 Drop into the game’s City Rumble mode, and you’ll quickly determine that Milestone did their racing game research. Turboing from the start can be accomplished by holding the accelerator at just the right time during the countdown, like almost every kart racer released during the last two decades. Drifting is initiated by a quick brake tap. Sure, it’s lacking the granular approach of sim-style racers, feeling like Ridge Racer but without the worry of counter-steering. However, the simplicity of the corner slide is entirely welcome, especially since it’s the fastest way to earn turbo.

You’ll need as much turbo as you can get. The competitions against other racers are pushovers at the game’s default difficulty setting. But the campaign’s lap time challenges will have you trying to shave fractions of a second from your completion times. Even if you hit every boost pad and don’t flub the frequent jumps, frequent turbo use is the only way to beat the designated track time and earn the best rewards. Given the game’s approach to unlockables, anything less than a podium finish feels disheartening. 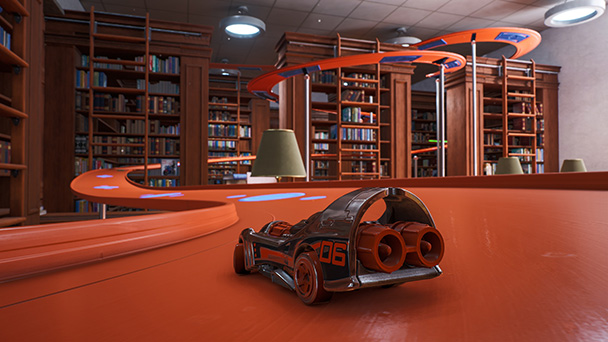 Of Cars and Commerce

Dividends arrive in two forms. Gears are used to augment the cars you already own, by purchasing upgrades that improve a vehicle’s stats. Coins are used to purchase new Hot Wheels. With limited time deals, standard and licensed car offers, and well as blind box purchases, there’s no shortage of new vehicles to unlock.

Pleasingly, each car is fastidiously modeled. From the metallic flakes in paintjobs to the unmistakable difference between metal and plastic pieces, Hot Wheels Unleashed’s cars look like real toys. Milestone even showcases them in authentic looking, simulated cardboard and transparent plastic boxes. What’s more, they handle like tiny model cars, maintaining their trajectory as they soar through the air after being launched from a ramp. They are all rather distinctive as well, with palpable differences in speed, acceleration, weight, and turbo capacity.

But grinding for new Hot Wheels means you’ll be doing a lot of racing. You’ll earn about 50 coins for a first-place finish. Purchasing a basic blind box will cost at least 500 coins. Licensed cars are even more expensive, requiring 24 winning races. As such, you’ll need to have a bankroll saved in case that a coveted car shows up for sale.

Then, there’s the issue of season passes. While the game’s set of 68 different Hot Wheels is substantial, the presence of at least three season passes feels a bit too opportunistic. Sure, there’s some cool cross-licensed cars coming out. But the prevalence of games as DLC-pushing platforms is growing increasingly tiresome. 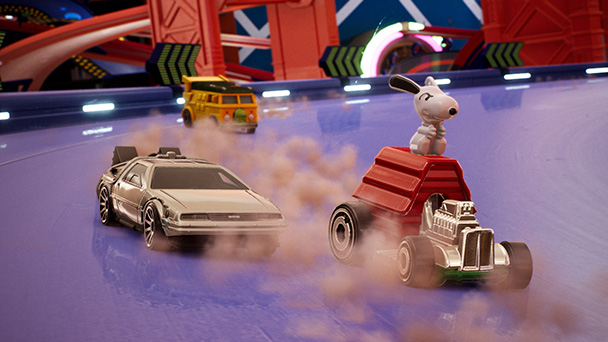 Twist and Shout (and the Interface)

But at least there’s longevity beyond the main campaign. For those seeking human competition, Unleashed boost local split-screen as well as online-based races. Alternatively, the game’s track builder offers an outfit for creativity. It’s quite powerful, offering the ability to twist the simulated plastic track pieces into all sorts of bends, curves, and elevation changes. You can make things as wild as you want, provided the slowest, heaviest vehicle in the game can complete a lap. Agreeably, you can even fill each venue with unlockable objects, too.

But Unleashed exhibits lackluster UI design. Often, the game split conformations between button taps and holds. And that unintuitive approach is also found in the editor. You’re use shoulder buttons or shift keys buttons to cycle between main options. Even after several hours of course design, I was still referring to the on-screen instructions, and struggling to realize my ambitious for roundabout circuits and coiling courses.

Further customization can be found in a robust livery editor where you can modify everything from material finish, part color, and apply up to a thousand layers of stickers. Agreeably, you can share both tracks and liveries online. 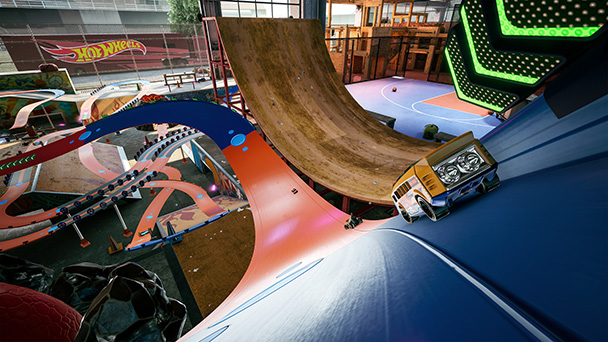 Hot Wheels Unleashed offers approachable car racing but it is also a bit of cash grab. If you can evade the enticement of additional vehicles, as well as modules for the track builder, there’s enough light-hearted fun to justify the fifty-dollar price. But if you’re the type of gamer who is preoccupied by owning everything, the title can be an expensive endeavor. While Milestone’s adaptation is commendable, it would have been great to see DLC accompanied by actual Hot Wheels, Skylanders-style.

Hot Wheels Unleashed was played on PC with review code provided by the publisher.

Hot Wheels Unleashed review
Unleashed offers the quintessential Hot Wheels experience, extending racing, track design, and collecting into a cohesive package. Just like the source material, accumulating new vehicles is nearly as fun as actual play. Although Forza Horizon 3&rsquo;s DLC was admirable, the Hot Wheels brand hasn&rsquo;t enjoyed a truly faithful interactive crossover. Sure, there have been a multitude of attempts to bring&hellip;

Summary : Hot Wheels Unleashed is both an entertaining racer and Trojan Horse that’s a harbinger for a succession of licensed DLC. It would be easy to be resentful if the core game wasn’t so fun.