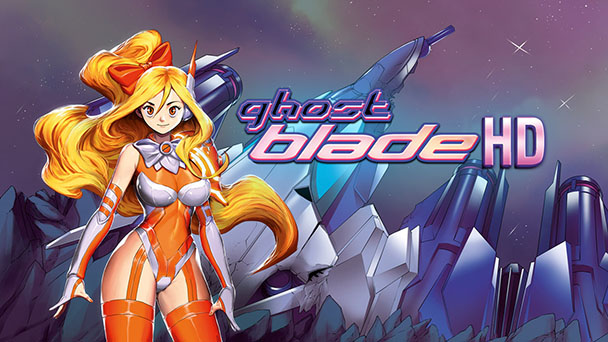 Ghost Blade was originally released for the Dreamcast in 2015, more than a decade after SEGA’s console had departed from store shelves. Despite the belated appearance, the title wastes no time making an impression. After selecting a single or two-player game, one of three different ships and difficulty level, you’ll be immediately thrown into the vertically scrolling fray. Ghost Blade HD assumes you’re here for the shooting, not for the storytelling.

And if you’re a fan of blisteringly intense, succinct STGs, Hucast Games’ presumption will probably be correct. The Hannover-based developer provides players with a trio of offensive tools to lead the attack. One button produces a spread shot, dispersing firepower in a cone-shaped pattern. Alternatively, you can opt to use focused fire, which consolidates your output into a hard-hitting stream. Finally, there are bombs that both clear the screen of any enemy bullets while inflicting an abundance of damage to enemies. 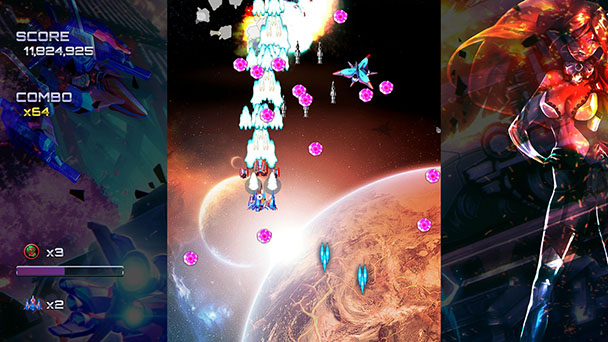 Unlike say, Ikaruga, there aren’t any discernable clues telling you which firing method you should be using during play. The spread shot’s wide distribution of munitions is useful when a multitude of subordinate enemies fill the screen, permitting players to eradicate them before they contribute to a hailstorm of bullets. Focus obviously lends itself to the game’s stage-ending boss battles. Here, a concentrated discharge can target and destroy pieces of the screen-filling monstrosities. If you’re playing on Easy mode, a bomb will detonate when you’re hit, thus saving a life. This kind of assistance isn’t available on Normal and Hard modes.

But save for the tension between spread or focused firepower, Ghost Blade HD lacks a bit of distinction. Sure, there’s a combo system that increases every time you pick up a stage star from a defeated enemy or destroyed environmental object. For skilled players, this counter will undoubtedly hit the thousands, which bequeath a generous end-of-stage score bonus, Of course, there are powerups that augment your offensive output. But unlike say, the Raiden series, you’ll hit the firepower cap quite quickly and instantly regain your arsenal when you die. Likewise, the game’s three different ship types won’t dramatically alter you play style. 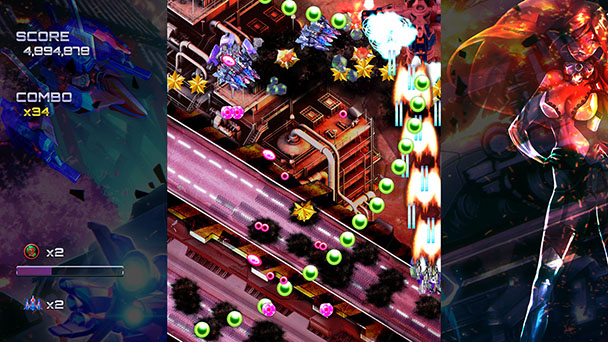 The incorporation of each of these mechanics, which have been employed by other popular shooters, means that Ghost Blade HD moment-to-moment play can feel a bit bland. Fortunately, the game exhibits enough polish that you probably won’t mind its ordinariness, at least in the short run. The long game might be a different though. There’s little incitement to return to the game after beating it, excepting for the unlocking of a score run mode.

But there is enjoyment in working your way to Ghost Blade HD’s fifth and final stage. The Hannover-based developer knows how to ratchet up the level of challenge quite gradually. Even on the game’s easy difficulty, the action can get intense on the last two levels, possibly prohibiting players less experienced with shooters with reaching the end. While evading the slow-moving storm of bullets isn’t too testing, Ghost Blade’s bosses like to simultaneously fling out fast-moving projectiles, which can disrupt your concentration. 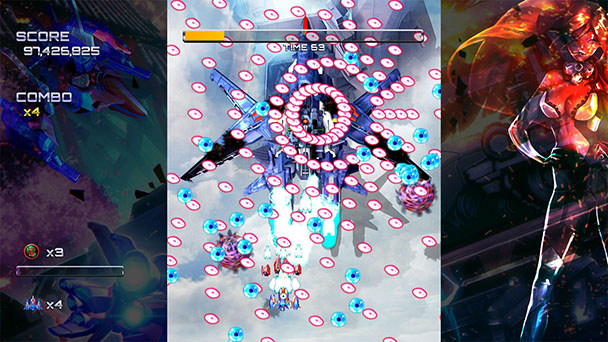 Fortunately, the local co-op feature can reduce the difficulty, since the game doesn’t scale proficiently to the output of two ships. Sure, visual distraction is more likely to happen when a pair of vessels are filling the screen with firepower, but ultimately, the concession proves advantageous. Undoubtedly, you’ll want to play the game is docked mode with a partner, as sharing Switch’s diminutive screen can make seeing the game’s munitions problematic. Ideally, you’ll have a rotatable monitor, since the game supports tate mode.

Top-tier shooters customarily offer one of more mechanics that endow them with distinction. Ghost Blade HD tension between spread and focused fire is competent but doesn’t measure up to traits like R-Type’s charging, Gradius’ selectable power-up system or Raiden 3’s trio of dissimilar weapon types. The end result is a solid, but dispensable shooter. 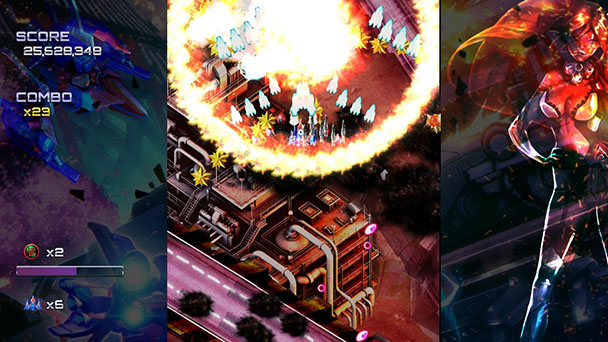 Ghost Blade HD review
Ghost Blade was originally released for the Dreamcast in 2015, more than a decade after SEGA&rsquo;s console had departed from store shelves. Despite the belated appearance, the title wastes no time making an impression. After selecting a single or two-player game, one of three different ships and difficulty level, you&rsquo;ll be immediately thrown into the vertically scrolling fray. Ghost Blade HD assumes you&rsquo;re here for the shooting, not for the storytelling. And if you&rsquo;re a fan of blisteringly intense, succinct STGs, Hucast Games&rsquo; presumption will probably be correct. The Hannover-based developer provides players with a trio of offensive tools to&hellip;

Summary : From Ikaruga, Raiden V, to R-Type Dimensions EX, the Switch is home for a several exemplary shooters. Ghost Blade HD doesn’t quite have the finesse to be a part of this exclusive club, but packs just enough fun to make the B-tier.