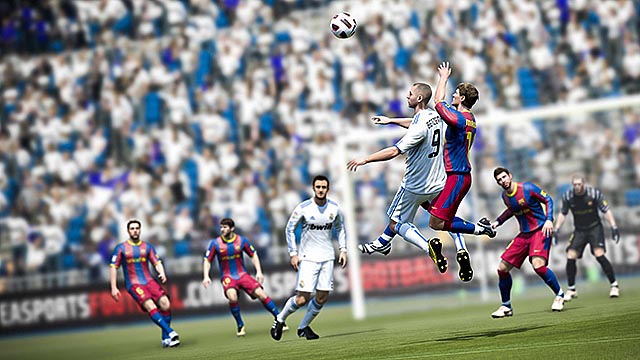 While this year’s cavalcade of EA Sports titles has delivered a determined amount of improvements, the advancements have often been accompanied by handful of new afflictions. From Madden NFL 12’s jerky post-play animations to the clunky artificial intelligence in NHL 12’s Be A GM mode, often the superfluities haven’t always matched the quality of the core game. Marvelously, that isn’t the case with FIFA Soccer 12, which beyond a couple of permissible quirks, stands as the undeniable apex for the eighteen-year-old franchise.

Whereas annual updates often provide one or two functional amendments and a laundry list of marginally notable back of the box bullet points, FIFA 12’s trifecta of improvements truly elevate the game. Last year’s iteration offered serviceable, yet unrealistic, defending as player’s dispatched AI drones to doggedly pursue the ball carrier. Wisely, it’s been replaced with a versatile system which favors marshaling the opposition into an unfavorable field position before attempting to regain possession.  It’s bound to drive the FIFA faithful nuts (who can revert to the old system via a menu toggle), but it’s a necessary evil which increases the verisimilitude of the game. For players who like to challenge the eyesight of the refs, a button to initiate a shoulder or jersey tug adds a new facet to defense. 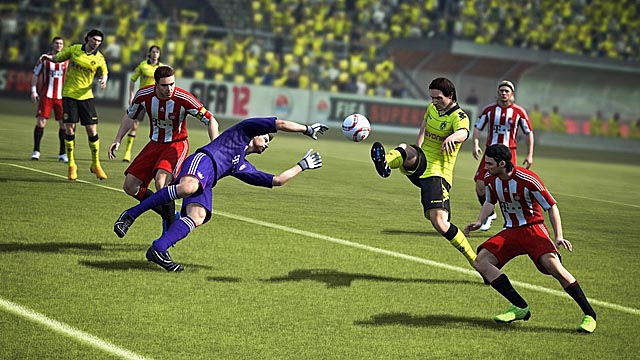 Much like NHL 12’s upgrade to its checking system, FIFA 12’s inclusion of the Impact Engine significantly boosts the authenticity of player collisions. Whereas contact previously seemed settled by an  under-the-hood dice roll and shown through a series of canned animations, the title’s new collision system makes player interaction much more organic. Now, contact can result in a realistic intermingling of limbs, with the magnitude of each challenge faithfully affecting an athlete’s momentum. Sure, there’s the rare midfielder who spins around like he’s trying to nail the lead for Swan Lake, but for the most part the system delivers a pleasing variability to each match.

On the offensive, Precision Dribbling offers multiple levels of mastery, allowing players to pry open the defense or vary the pace of the game. Previously, a mob of enouncing opponents was responded to with a sky-high clearance. Thanks to the improved dribbling toolset, gamers with a keen sense of timing can channel their inner Messi and beat a trio of opponents with a couple of touches. Just don’t expect to constantly bulging the back of the net- FIFA’s goalkeepers have been given an AI upgrade to temper the formidability of your new offensive arsenal. 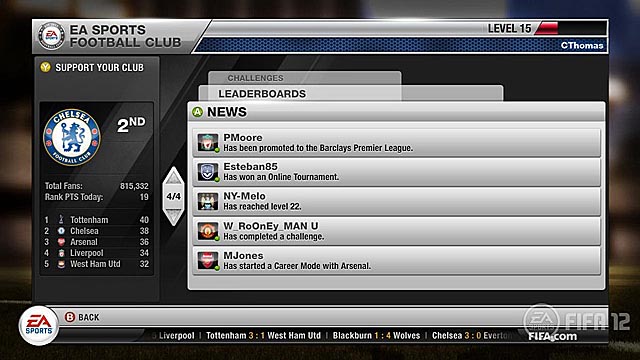 Off the pitch, FIFA Soccer 12 has also seen a number of pleasing improvements. The game’s returning career mode now incorporates nuances such as morale, wages, and league position to vary an athlete’s on-field performance as well as adds a scouting system and training academy. Regretfully, the component’s reliance on using austere menus to convey information may remind players of Football Manager’s once–stark aesthetics. FIFA’s Football Club is bound to draw comparisons to Burnout’s Autolog functionality, providing players with a list of their friends’ achievements, experience tracking, as well as the ability to donate earned experience points towards the elevation of their favorite club. Courteously, Ultimate Team has made the transition from post-launch, paid DLC to being on the disk, sweeting the deal and keeping FIFA aligned with the rest of the EA Sports franchises.

Dazzlingly, FIFA 12’s presentation remarkably outshines last year’s game. Athletes are immaculately rendered and startlingly animated; even in the game’s default camera perspective. Luminaries are easily recognized- which given the game’s substantial selection of twenty-six different leagues, is quite an accomplishment. The game’s interface has also been given a pleasing overhaul, carefully balancing attractiveness and serviceability. About the only complaint that could be made of the game’s visuals are the crowds- which look convincing in distant shots, but become pixelated splotches when viewed in the immediate background. Sonically, FIFA 12’s stadiums chants and commentary is top notch; complementing Alan Smith’s and Martin Tyler’s core analysis are Clive Tyldesley and Andy Townsend’s coverage of the larger, tournament matches. 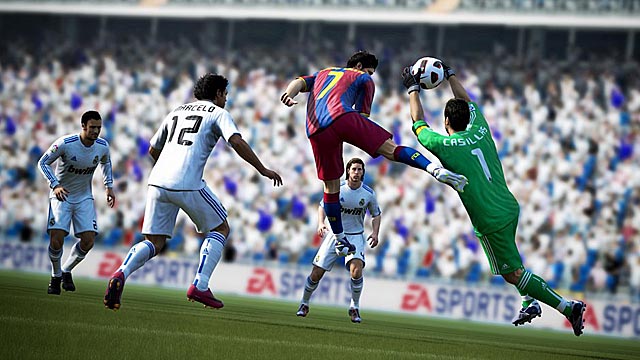 Amazingly, each of EA Canada’s changes to FIFA Soccer 12 not only heighten the sense of realism, but help make the title one of the most enjoyable simulations of the pastime ever made. While soccer is often related to fifth sport status in the United States, FIFA 12’s exhibits enough polish and substance to propel the game to a larger audience- not unlike what EA’s NHL series did in the early 90’s.