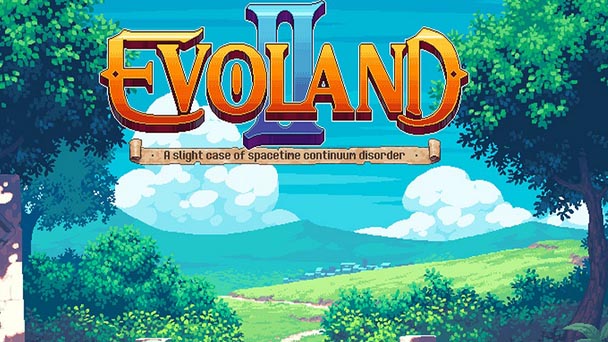 Nostalgia is a tragically fragile sentiment. Relentlessly, publishers attempt to reinvigorate salient gaming memories, with a cavalcade of remakes, reboots, and remasters vying for our disposable income. For indie developers, there’s a similar effort to tap into sentimentality, with a procession of new games that mimic the mechanics or pixelated graphics of previous eras. But for every success like Spelunky, SteamWorld Dig, or TowerFall, there are titles that aren’t as subtle, supplying little more than a disjointed hodgepodge of references to gaming’s past.

Evoland, a 2013 release from Bordeaux-based Shiro Games was guilty of this transgression. As players persevered, new elements were added to the game, making the journey mirror a chronological progression that started with the Gameboy and concluded with the 16-bit generation. While the concept was innovative enough for its predecessor to win the Ludum Dare competition, ultimately Evoland’s expedition wasn’t as engaging as its inspirational material, with the game advancing only a skeletal storyline. 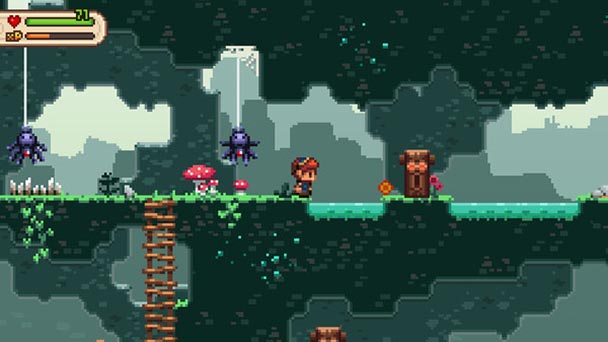 Wisely, that offense is corrected by Evoland 2: A Slight Case of Spacetime Continuum Disorder. Like any component sequel, the achievements of its predecessor are augmented, with the title providing a persistent procession of allusions and reproductions of classic gaming experiences. From The Legend of Zelda, Super Mario Bros., Final Fantasy, Street Fighter II, Bomberman, to Diner Dash, Evoland 2 offers a steady stream of homage- as the game catalogs a list of gaming’s noteworthy play mechanics. But more importantly, the follow-up’s narrative seems culled from the golden-age of JRPGs, with characters and a storyline that flawlessly imitate a collection of role-playing classics.

While Evoland 2’s introduction mimics the evolutionary elements that propelled its predecessor into popularity, soon after exposition emerges. The context is a time of perceived optimism, following a grueling war between demons and humans, with the latter faction having shouldered sacrifice and risk to develop a technology that would overwhelm the opposition. Despite the significance of the situation, our protagonist, a red-haired, good natured, young man named Kuro is found in a forest, with little remembrance of both the event and his identity. His rescuer, an energetic girl named Fina, offers care for the wounded warrior, and when Kuro regains consciousness, the duo attempt to learn more about the hero’s past. 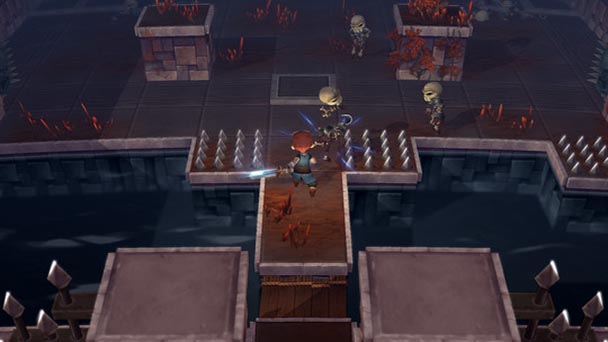 Naturally, that opens a Pandora’s Box of complications. This time out, Evoland 2’s aesthetics are used to signal three different ages: an ancient eight-bit era, a contemporary world built from SNES bitmaps, and a Dreamcast-looking future. Pleasingly, Evoland 2 makes the most of its time-travelling plotline, offering Chrono Trigger-esque viewpoints where key events are either foreshadowed or ruminated long after their occurrence. This shift of perspectives is also given to the game’s factions, in keeping with Japanese role-playing tradition.

Likewise, Evoland 2’s secondaries feel like they are pulled right out of ‘90s gaming. Employing familiar tropes, charm is found in their interactions, with Shiro Games using a scant amount of dialog to cultivate emotion and poignancy. Considering the often farcical, fourth-wall breaking tone of the game, growing attached to Fina, Menos the contemplative demon prince, and Velvet- a persistently inquisitive archeologist symbolizes a feat for Shiro’s writers. Sacrifice, acceptance, and honor are all familiar themes for characters but here, Evoland 2 expresses each one with eloquence and elegance. 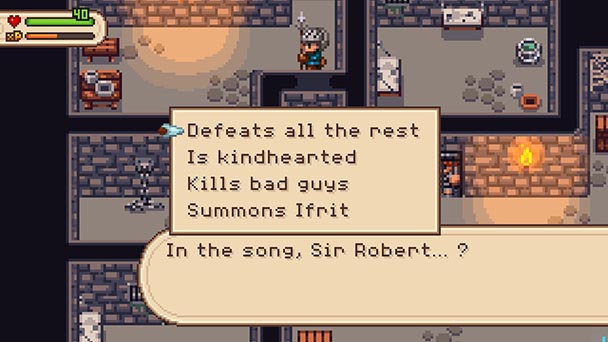 Functionally, your sidekicks prove invaluable, with each offering a unique special ability that’s needed for advancement. Initially, Fina is able to break otherwise-indestructible obstacles and flip distant switches while Meno plummets from the sky to destroy blocks during a platforming sequence. Notably, each characters ability is tied to a cool down meter, forcing players to rely on Kuro’s rudimentary combat skills.

In keeping with the source material, Evoland 2 habitually keeps conflict simple. The game’s overhead sequences give Kuro little more than a melee weapon, while a side-scrolling platforming stage allows the weapon to have an Adventure of Link-like sonic wave. As players continue through the fifteen hour campaign, they’ll be tasked with issuing hadouken-like strikes and shooting waves of foes in a shmup sequence. While Evoland 2 doesn’t stick with a single genre for too long, transitions between play types feel natural, while each shift give players time to acclimate to the challenge at hand. 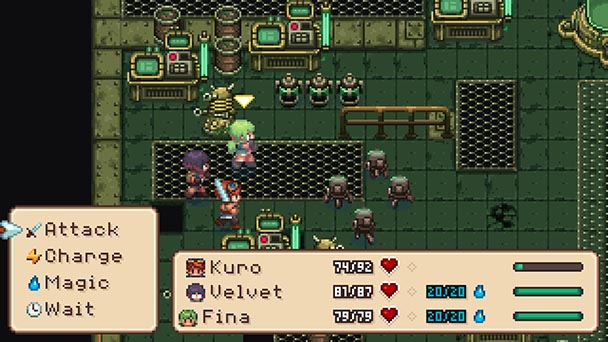 Of course, for role-playing fans without honed reflexes, some of the game’s stages might cause frustration. Difficulty levels, experience upgrades, unlimited continues, and ample check pointing (especially during a stealth sequence) help to counterbalance this, but there are areas of the game poised to stymie some players. Likewise, the occasionally tedious chore is destined to dull the action gamer. Whether Evoland 2 is copying or satirizing role-playing convention is unclear. But a series of missions where you search a city for children, buy and serve tea to a pretentious royal, as well as work at WokDonald’s taking and serving orders brought down the pace of the game. Later, Evoland 2’s drops its linear trajectory, sending players on a wide-open, freely time-adjusting quest to retrieve five items. Potentially, dropping the handholding might create an impasse for role-playing greenhorns.

Evoland 2’s other issues might be a bit more mendable. Despite being played on a robust (i7, GTX 770) rig, the game repeatedly micro-stuttered. While the effect on action wasn’t too damaging, the game’s otherwise brilliant soundtrack was spoiled. During play, a few frustrating, graphical glitches were encountered as well, sullying the otherwise meticulous sense of charm. 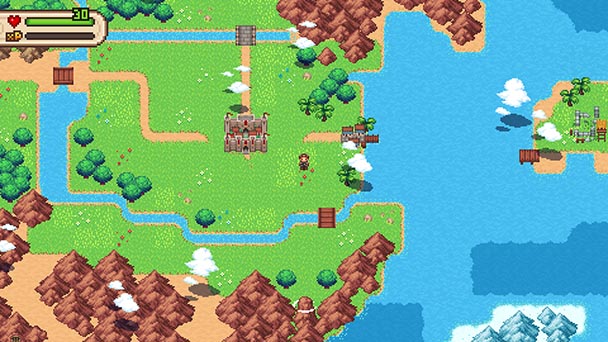 Even with permission to use the original IP, nostalgia can be tricky to nurture. Despite a lack of license, Evoland 2 recalls many of gaming’s most evocative moments- wrapping up this roll-call of references with a tender storyline that’s surprisingly true to form. While newcomers might not be able to appreciate all of the allusions, veteran games can expect a don a smile through a majority of the game’s fifteen hour journey.

Evoland 2: A Slight Case of Spacetime Continuum Disorder was played on the PC with review code provided by the publisher.

Evoland 2: A Slight Case of Spacetime Continuum Disorder
Platform: PC
Developer: Shiro Games
Publisher: Shiro Games
Release date: August 25th, 2015
Price at release: $19.99 via Steam
Evoland 2: A Slight Case of Spacetime Continuum Disorder review
Nostalgia is a tragically fragile sentiment. Relentlessly, publishers attempt to reinvigorate salient gaming memories, with a cavalcade of remakes, reboots, and remasters vying for our disposable income. For indie developers, there&rsquo;s a similar effort to tap into sentimentality, with a procession of new games that mimic the mechanics or pixelated graphics of previous eras. But for every success like Spelunky, SteamWorld Dig, or TowerFall, there are titles that aren&rsquo;t as subtle, supplying little more than a disjointed hodgepodge of references to gaming&rsquo;s past. Evoland, a 2013 release from Bordeaux-based Shiro Games was guilty of this transgression. As players persevered, new&hellip;