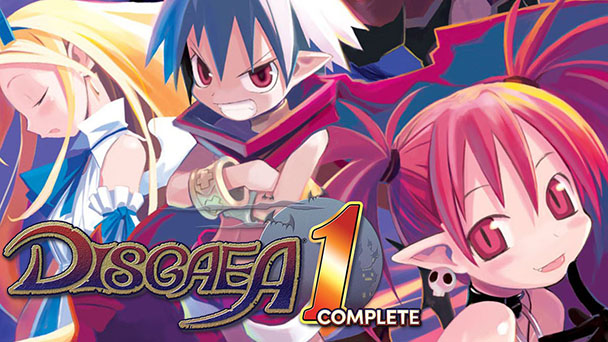 For the past fifteen years, Disgaea has been developer/publisher Nippon Ichi’s proverbial cash cow, with the success of the original game spurring a succession of sequels, two insanely difficult platformers, a visual novel, and an anime. The strategy role-playing genre might have been established long before the release of 2003’s Disgaea: Hour of Darkness, with titles like Langrisser (aka Warsong), Shining Force, Ogre Battle, Fire Emblem, and Final Fantasy Tactics each depicting chess-like, turn based, combat on a gridded battlefield. However, it was Disgaea that endowed the proceedings with a rousing sense of autonomy, providing players with a malleable toolset that could be exploited to succeed at each matchup.

Head into the PlayStation 4 and Switch remaster and you’ll discover a plot that feels downright Shakespearian, as a sleeping Laharl awakens to find out that his father, King Krichevskoy has died. Angered by the prospect that anyone would even consider seizing authority, the demi-demon sets out to reclaim the throne, generating a series of situations where the impetuous lead faces off against a bevy of ambitious types, inciting a tour through the Netherworld. 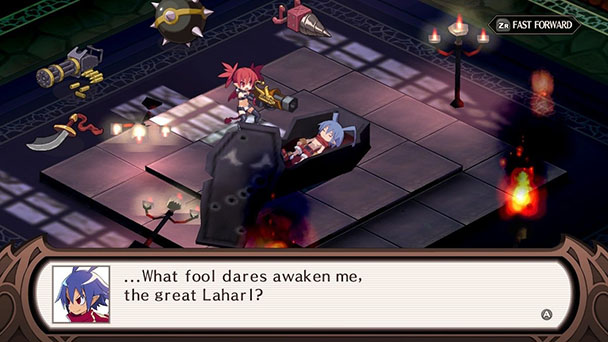 He’s not alone on his journey, and much of Disgaea’s humor stems from his interaction with allies. Joining him are Etna, a two-faced vessel, who humorously critiques Laharl’s ambitions, while offering little guidance of her own. She appears to have her own motivations, which helps cultivate intrigue, since her allegiance in unclear for significant portion of your playtime. She’s also the leader of a Prinny squad, comprised of the penguin-esque mascots of the Disgaea series. As the reincarnated souls of sinful people, the Prinnies existence revolves around menial work, and the threat of being tossed, since each carries a powerful explosive in their belted satchel.

Rounding out the main cast is the angelic Flonne, who is the anthesis of Laharl’s meanspirited ambitions. Often labeled ‘Lovefreak’ for her perpetual push of love and morality, she persistently aggravates both Laharl and Etna with her naiveite and aspiration of educating demons about the power of love. Naturally, the clash of personalities is persistently comical, with the discord spilling out across Disgaea’s four main followups. 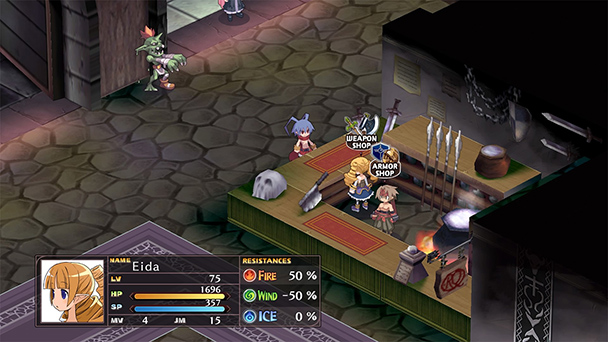 While exposition bookends the game’s chapters and provides impetus for the game’s encounters, combat is where you’ll spend the bulk of your time. If you’ve never played any of the Disgaea titles, the game provides a succinct summary of the fundamentals. But you’ll have to experiment to learn and master the nuances, which shouldn’t be too difficult as quite a few strategy-driven titles have borrowed from Nippon Ichi’s basics.

You’re given a bit of freedom during combat deployment, selecting characters in any order. While units follow the traditional cycle of moving and attacking, actions aren’t actually performed until you select the execute command from game’s menu system. If you have played a Disgaea title, you’ll immediately discern mechanics like Geo Panels, the ability to throw characters, the Item World and the Dark Assembly, which collectively help to distinguish Disgaea from its strategy role-playing peers. 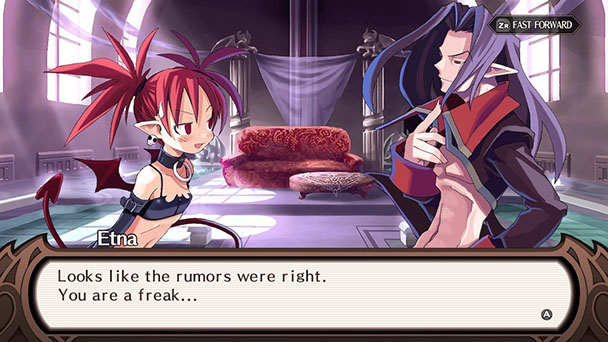 Geo Panels are scattered pyramids that affect parts of the playfield. They offer perks like double attacks as well as disadvantages like lowering the offensive or defensive stats of a character positioned in its highlighted range. Effectively, they add variance to the turn-based conflict, as you rush to beat enemies to the advantageous areas. They can also be destroyed, which is a useful strategy when affected zones are filled with foes. When this happens, there’s a bit of spectacle, as grid spaces incur damage, recalling a cascade of falling dominos.

The Disgaea franchise is notorious for goading gamers into grinding. This remake does nothing to dispute that assertion, especially when newly created party members come into the Netherworld with lowly stats. While spending hours leveling up characters and equipping the most powerful gear isn’t a requirement to complete the game, it is part of the experience. The game’s Item World is your inroad into augmentation, offering a rogue-like experience where you can power-up any piece of equipment or even the most basic HP-rejuvenating chewing gum. 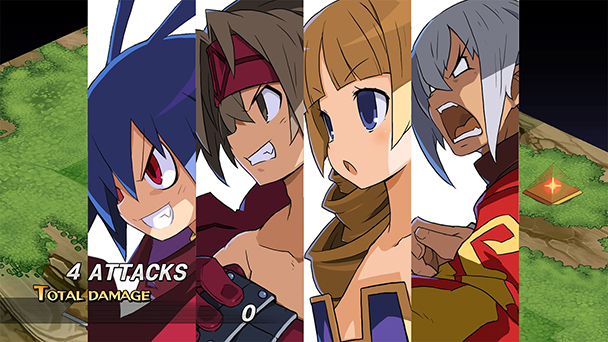 If you want to see characters deduct exponential amount of damage from enemies, the Item World will become your second home and it’s entirely possible to eliminate any sense of difficulty if you devote yourself to the game. But like the Dark Assembly, were you can bribe, and if that doesn’t work, literally beat senators into submission, Disgaea’s deep game is more satirical than strategically-minded. If you have played previous entries this won’t come as a surprise, but you might miss the gradual adjustments made to combat. Elements like Magichange, first introduced in Disgaea 3, let you turn monsters into guns, while D5’s Evility System is unsurprisingly absent. As such, Disgaea 1 Complete makes an almost ideal inroad into NIS’ beloved franchise.

So why almost? At launch, Complete has a few issues. Some, like the occasional texture that didn’t receive an upscale if forgivable. While 99 percent of the game employs the high-resolution sprite-work found in Disgaea 4 and 5, discerning eyes will notice the untouched asset, like Laharl’s coffin door in the first scene. But the larger issue is the tendency for the game to crash. During review, this happened at least six times on the Switch, which is unacceptable for a retail release. Play carefully, saving at each opportunity and you can reduce your losses, but you really shouldn’t have to be so vigilant with a commercial build. Fortunately, the PlayStation 4 version performed better, with no apparent bugs across at least twenty hours of play. 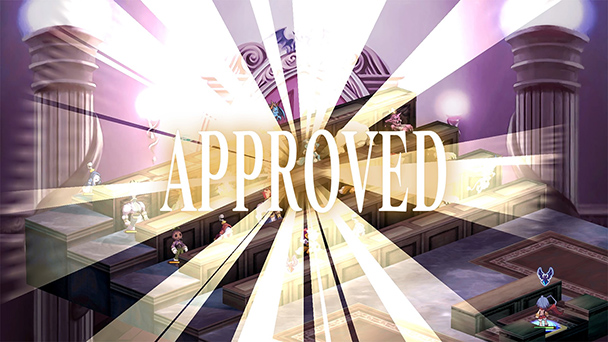 If you’re able to look past the instability of the Switch version, Disgaea 1 Complete is a laudable experience. The improved fidelity of Takehito Harada’s character designs are a visual delight, while the inclusion of Etna mode from the PSP iteration adds hours of playtime to an experience that already can stretch for over a hundred hours.

Disgaea 1 Complete was played on the Switch and
PlayStation 4 with review code provided by the publisher.

Disgaea 1 Complete review
For the past fifteen years, Disgaea has been developer/publisher Nippon Ichi&rsquo;s proverbial cash cow, with the success of the original game spurring a succession of sequels, two insanely difficult platformers, a visual novel, and an anime. The strategy role-playing genre might have been established long before the release of 2003&rsquo;s Disgaea: Hour of Darkness, with titles like Langrisser (aka Warsong), Shining Force, Ogre Battle, Fire Emblem, and Final Fantasy Tactics each depicting chess-like, turn based, combat on a gridded battlefield. However, it was Disgaea that endowed the proceedings with a rousing sense of autonomy, providing players with a malleable toolset&hellip;

Summary : Most fifteen-year old games exhibit a bit of aging, but Disgaea 1 Complete feels just as enjoyable and relevant as it did in 2003. The updated sprite-work is an appreciated addition, and if NIS America can patch the Switch version, the game deserves a permanent spot on every role-playing aficionado’s SD card.