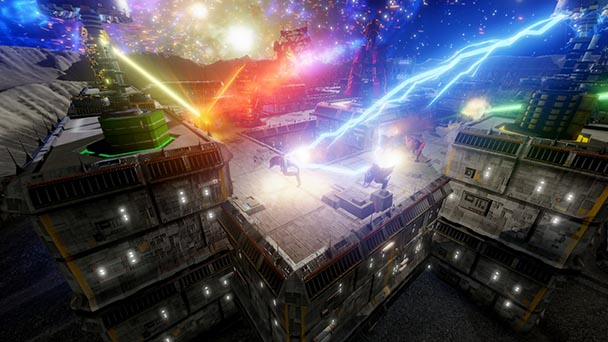 Robert’s Take: I put a chicken pot pie in the oven, and boot up DG2: Defense Grid 2 to help pass the hour-long cooking time. Within seconds of navigating through the slick, StarCraft II-esque menu system, I’m plunged back into the main campaign, where I’m committed to halting a persistent procession of creatures, all hell-bent with stealing my power cores. Building a string of safeguarding turrets seems to be an effective countermeasure at first- electrifying swarms with a powerful Tesla turret and raining down hot, molten malevolence via a couple of Meteor towers.

But the alien onslaught grows stronger, forcing every bit of my resource budget into strategic upgrades, such as Boost towers which can elevate turrets above adjacent defenses, to provide a clear shot at the advancing xeno scum. Alternatively, the boost blocks provide access to upgrades which can unmask cloaked foes, or even provide additional resources when the enemies are exterminated. Choices abound, but there’s little time for strategic contemplation as the ambush endures, sending opponents with regenerating health into the bowels of my labyrinthine base.

With my attention diverted towards multiple predicaments, a klaxon blares. While the initial thought was the theft of one of my cores, the loss turns out to be quite real. I’ve become so entranced by DG2: Defense Grid 2 that my pot pie has turned into a nearly unidentifiable charred crock, sending a smoke alarm shrieking in distress. 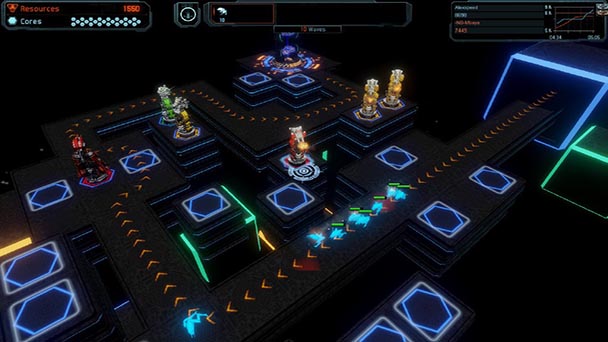 Those who played 2008’s Defense Grid: The Awakening (and its expansion, 2013’s Defense Grid Containment) will likely find little revelation in the aforementioned anecdote. Hidden Path Entertainment’s entry into the tower defense field remains one of the genre’s pinnacles, delivering a painstakingly polished, challenging experience that stands up to repeat play thanks to the diversity of your antagonist-ambushing toolbox and deft level design.

Unsurprisingly, DG2: Defense Grid 2 makes no attempt to revolutionize the tower defense game, building success in a number of gratifying, if conventional, amendments to the The Awakening’s compelling framework. Take the Boost blocks, which not only act as a reasonably-priced method of directing enemy traffic, but also bestow Defense Grid 2 with a intriguing elevational element, without adding the complexity of a third dimension. Likewise, unlockable abilities also up the tactical ante, compelling your long-range Missile batteries to bombard tougher enemies, leaving your lesser Inferno towers to incinerate lesser foes. Another noteworthy feature is the ability to choose assistive generals, who each bring a special ability that’s bound to a cool-down timer. Some deliver destruction via a punishing death-ray laser while others extract additional resources, allowing players to periodically boost their building currency. 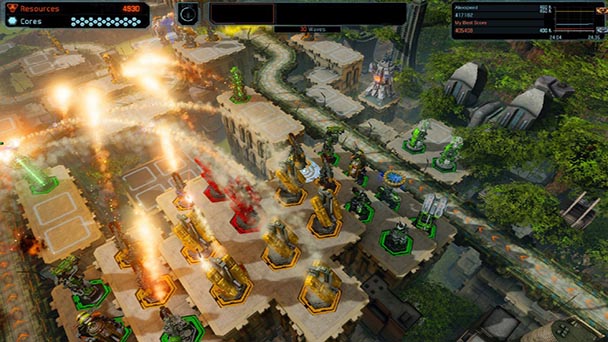 When these components are coupled with variables that include four skill levels and eight different play modes across the main campaign of twenty-one stages, DG 2 can often feel like a massive sandbox, capable of engaging players with a multiplicity of play styles. Beyond the assortment of fix single player modes, the game also extends two types of co-operative play, one mode where players share a common resource pool and another where each commander has pre-assigned turret locations. Beyond that, there’s a competitive mode, where killing a creature respawns the beast onto your opponents side of the map.

While progressing through DG2’s campaign is engaging, a few blemishes might sully the experience. About halfway through the operation, the difficulty ramps up significantly, which might cause some frustration for Tower Defense neophytes. Fortunately, the game allows players to jump back to the last checkpoint with a button press, which helps to mitigate the infuriation of a pack of Racer alien sprinting away with a group or cores. While the banter of between returning character General Fletcher and his AI colleagues bestow DG2 with a bit of personality (and a bit of comical irreverence), the storyline is confined to text screens and voice over, which might not absorb gamers accustomed to flashy CGI cinematic. 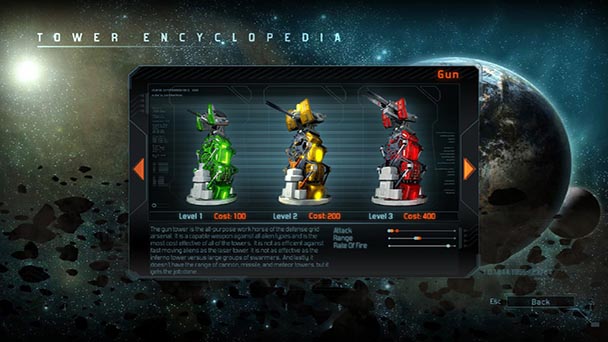 Across the PlayStation 4, Xbox One and PC, it’s apparent that Hidden Path Entertainment swapped a bit of visual intricacy for the sake of a steady framerate. While weapon effects such as arcing Tesla turrets or the conflagration of Meteor strikes are certainly impressive, a lack of environmental aliasing and alien detail is evident when players zoom in on the battlefield.

As such, the PC version demonstrates a remarkable stability, offering an unflinching framerate with the settings maximized on a GTX 770-powered rig, while remaining playable on mid-range, integrated graphics APUs such as the A8 and i5. Although we encountered a few crashes had to minimize the visual fidelity, DG2 even ran on a lowly ASUS Transformer Book T100TA.

Unsurprisingly, the PC version of the game offers the most functionality, extending the ability to create and share custom maps via Steamworks integration. On the PlayStation 4, the speed of play lends the game to PS Vita-powered Remote Play, although the twitchy throw of the portable’s thumbsticks may translate to a few misplaced towers on the build grid. But with time and practice the kinks iron out quite nicely. While the Xbox One version of the game is devoid of ancillaries, it offers the same amount of visual fidelity found in the other iterations. In the end, additional maps make the PC version the frontrunner, while console owners should base their purchase choice on platform preference. 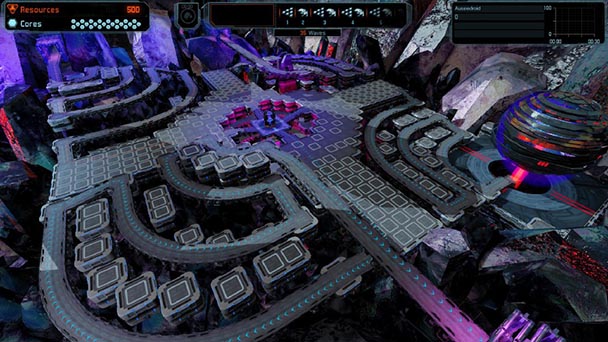 Jeremy’s Take: In tower defense games, early levels begin with fairly linear routes that may occasionally twist or bend, yet ultimately follow a straightforward path from start to finish. Later, alternate paths may open and new branches might offer special challenges or features, but that direct path is always there to ground the player in the original, basic premise: they’re coming, and you’ve got to stop them.

Thus is a metaphor belabored for DG2: Defense Grid 2. As a tower defense game and the sequel to the authoritative 2008 original, DG2 does not deviate into new territory. It stays its course, obeying fairly strict genre conventions.

In the far-flung future of space colonization and sentient AI, aliens and humans are in conflict. In order to steal power cores from human settlements, aliens of various types follow predetermined paths to power stations, then back again through the player’s gauntlet of weaponized towers. Each core represents a portion of the player’s life meter, and the player is challenged to protect them while adapting to new waves of aliens and exploiting their weaknesses. Of course, funds are limited and enemy waves pile onto each other without mercy until one side prevails. 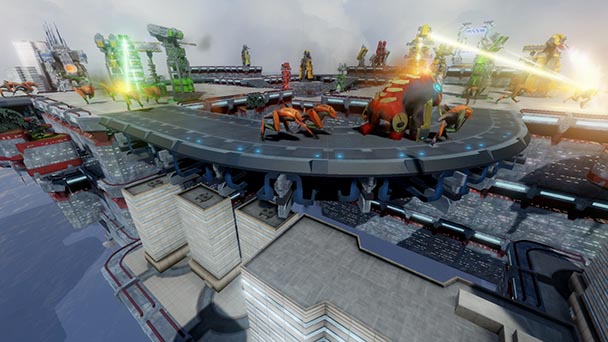 Defense Grid 2 sticks with the exquisite mechanical simplicity of its predecessor, leaving its best ideas intact. Replayable checkpoints, dynamic paths, and a solid weapon scheme are all here, and the result is as solid as ever.

What’s been added for Defense Grid 2 doesn’t upend the boat, but adds nice (and completely optional) touches to the formula. Towers can gain optional abilities that are pre-set before each level, and each of the new AI generals has a special ability (with a lengthy cooldown) to help bolster offense or resources. DG2 also includes online multiplayer (cooperative or competitive) and a level editor in the PC version. Additionally, each map has a large number of challenge modes with special rules, partially addressing longevity criticisms leveled at the first game.

Confoundingly, the enjoyment factor of Defense Grid 2 is tough to articulate. It’s hard to call obsessive building, tweaking and replaying “fun” per se, but there is nothing quite like the satisfaction of building a perfect killing field and completing a mission with a gold rank. As such, it’s difficult to look at the (long) list of challenge modes and think it would be fun to return and master every possible permutation of every level. It’s hard to find fault with Defense Grid 2 because everything it attempts, it executes nearly without flaw. It looks great, it plays great, it sounds great… but it’s sometimes difficult to tell whether actual entertainment is happening, or if it’s just commitment to a high scoring session. It’s telling when a perfect victory is abandoned with a defeated shrug, and the rest of the level coasts past with a feeling of detachment. I’ll say DG2 is very fun, if you opt in to it.

DG2: Defense Grid 2 was played on the PlayStation 4, Xbox One, and PC with review code provided by the publisher.

DG2: Defense Grid 2
Platform: PlayStation 4, XBox One, PC
Developer: Hidden Path Entertainment
Publisher:  505 Games
Release date: September 23rd
Price: $24.99
Language(s): English voice/text
DG2: Defense Grid 2 Review
Robert&rsquo;s Take: I put a chicken pot pie in the oven, and boot up DG2: Defense Grid 2 to help pass the hour-long cooking time. Within seconds of navigating through the slick, StarCraft II-esque menu system, I&rsquo;m plunged back into the main campaign, where I&rsquo;m committed to halting a persistent procession of creatures, all hell-bent with stealing my power cores. Building a string of safeguarding turrets seems to be an effective countermeasure at first- electrifying swarms with a powerful Tesla turret and raining down hot, molten malevolence via a couple of Meteor towers. But the alien onslaught grows stronger, forcing&hellip;

Summary : While DG2 doesn't offer any genre-disrupting innovations, the sequel offers an engaging sandbox brimming with tools for alien annihilation.