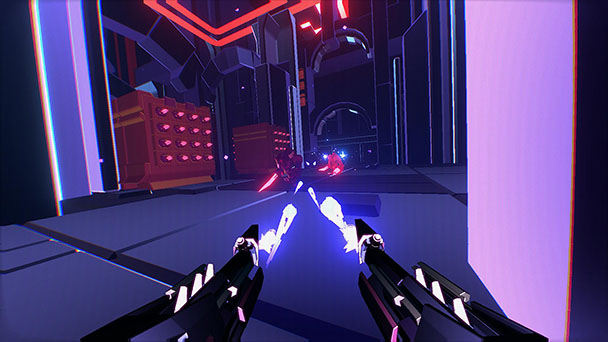 I spent the better part of the early 2000’s managing an addiction to first-person shooters. Regardless of popularity or review score, I purchased each new one that came along- desperately hoping to maintain a euphoric state of circle strafing and ballistic supremacy. But gradually, the compulsion dwindled as the genre went through a phase of prolonged stagnation. For years, visual fidelity and the intermittent involving narrative were the only remnants of progress, as gameplay innovation took an extended hiatus.

Then unexpectedly, Superhot roused my obsessions. Here was a game built around the immersive point-of-view of first-person-shooter, but one where time only advanced when you moved. The mechanic proved to be a remarkable stimulus, seamlessly endowing the frenzied action with just a bit of puzzling. Here, death could come exceedingly quickly, leading to a trial-and-error experience that drove players into fits as they impatiently reached for the reset button after an imprudent misstep. And when you finally did slow-mo your way through a stage, Superhot made you feel like Neo in the lobby scene from the original Matrix, as you lithely obliterated an entire league of antagonists. 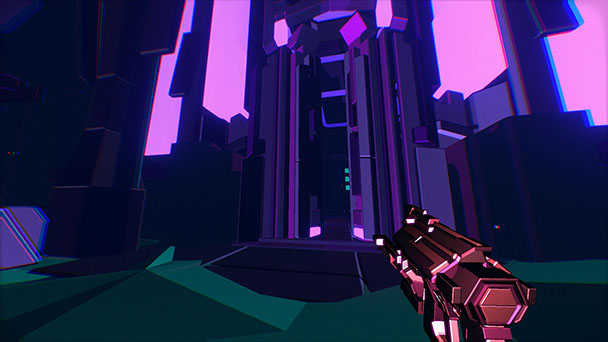 Similarly, the recent release of Desync for PC summons the cycle of frantic firefights and pounds on the reset key. Each diminutive stage puts players in a gladiatorial pit filled with spawning enemies. Success stems from performing attack sequences, each rewarding risk with power-ups that replenish your ammo and health. While the blueprint might sound simple on paper, Desync is definitely fun, if you can get past a few contentious minor issues.

Beyond placing players in deliberately cramped, trap-filled arenas, Desync’s other distinction is its aesthetic vibe. Visually, the title favors rich purples and opulent reds to render a purposefully low-poly, Tron-like universe. Visual divergence is made through the use of CRT-like filters and RGB glitching, promoting a photosensitivity warning at the start of the game. But the main issue isn’t with seizure-inducing flashing light, but rather the ambiguity of the user interface. 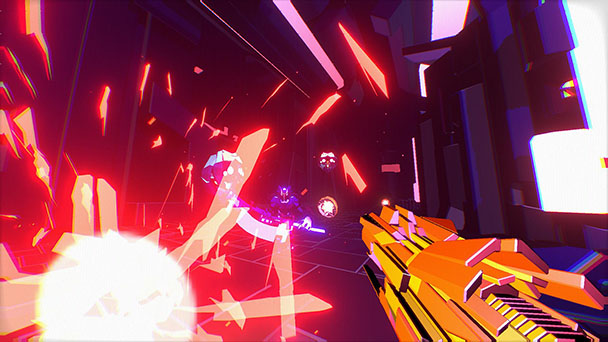 Sure, developers The Foregone Syndicate want to escort gamers into an unfamiliar, immersive, and cool context. But a vexing issue is rooted from Desync’s aloof attitude. Everything from level selection, player and sidearm upgrades aren’t handled intuitively, hiding submenus behind no traditional interactions. To make matters worse, Desync uses cryptic language for its functionality, tossing around technical terms like ‘establish’, ‘intrude’, and ‘reconnect’. For some, the game’s decision to require mouse and keyboard input will be contentious. Allow the developers argue that the control scheme is required for high-level play, offering optional assists for those who prefer a controller would be a considerate addition.

Fortunately, the title expresses its game-based goals with a bit more clarity. Levels spawn a growing succession of enemies, across a procession of smaller maps. At first, Desync’s wire-frame indicators give birth to smaller, sword carrying enemies that can be dispatched with a single hit. But soon, the level of adversity is augmented when giant, axe-wielding, power-jumping behemoths make a bee-line for you and a horde of scythe-hurling foes congregate in the distance. As with most first-person shooters, strategy is grounded in how you deal with a miscellaneous mob of enemies. Whether you favor crowd control or removing the more formidable threats, there needs to be a very systematic method to the madness. Because before long, you’ll need to use the full power of your arsenal, switching to your pistol, after a powerful shotgun blast temporarily stuns a sturdy opponent. 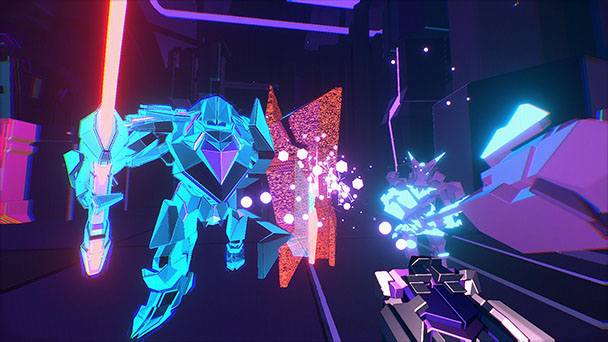 And likely, you’ll want to dispatch with a bit of panache. Sending a rival into a wall full of spikes not only increases your score but elevates the odds that your enemy will cough up a better reward when they are eradicated. But each ensnarement is a dumb machine, so you’ll want to steer clear of them unless you want to incur some skewer damage. Fortunately, Desync’s denizens aren’t too bright either and with a bit of thoughtful movement you might be able to coax an enemy into a trap.

Gamers shouldn’t expect any but the first set of introductory stages to be a cake walk. Quickly, Desync pits players against packs of pugnacious foes- and in the confined contexts, it can be quite challenging. Although using the left shift key allows players to sprint, difficulty is rooted in trying to create space from encroaching foes. Boss battles are especially difficult, pressing players into deducing patterns and observing any openings. As such, it’s not uncommon to repeat levels five, ten, or even fifteen times before trial and error imparts its wisdom and you discover a method to enemy extermination. 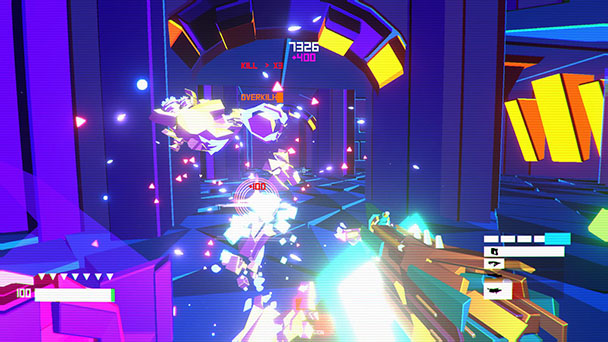 Desync is unapologetically challenging, reveling in its own sense of difficulty. For a few looking for a leisurely first-person shooter, that’s going to be a deal breaker. But for players who prefer intense action where a single misstep can end a game, Desync largely delivers. While the title doesn’t revolutionize the first-person shooter genre, there’s certainly enough novelty to justify a sale price.

Desync was played on the PC with review code provided by the publisher.

Desync
Platform: PC
Developer: The Foregone Syndicate
Publisher: Adult Swim Games
Release date: February 28th, 2017
Price: $14.99 via Steam
Desync review
I spent the better part of the early 2000&rsquo;s managing an addiction to first-person shooters. Regardless of popularity or review score, I purchased each new one that came along- desperately hoping to maintain a euphoric state of circle strafing and ballistic supremacy. But gradually, the compulsion dwindled as the genre went through a phase of prolonged stagnation. For years, visual fidelity and the intermittent involving narrative were the only remnants of progress, as gameplay innovation took an extended hiatus. Then unexpectedly, Superhot roused my obsessions. Here was a game built around the immersive point-of-view of first-person-shooter, but one where time&hellip;

Summary : Desync is a difficult game, so tantrum-prone players might want to move any throwable objects in their immediate vicinity. But completing each stage is wholly rewarding, reimbursing patience and perfectionism.