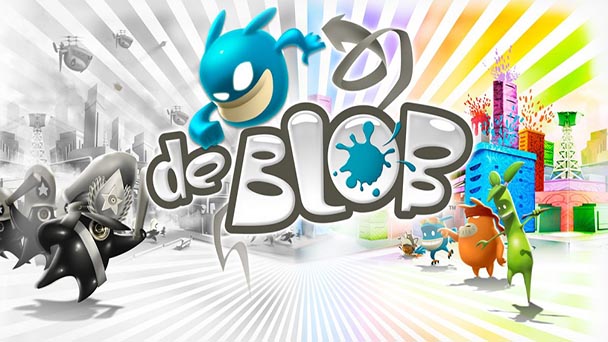 According to psychologist Mihaly Csikszentmihalyi, ‘flow’ is the mental state a person reaches when they are fully immersed in a task. Commonly known as being ‘in the zone’, Csikszentmihalyi isolated nine elements that occur when people flow, among them a distorted sense of time, clear goals, and a sense of reward. Across the last twenty years, a scant number of games have truly catapulted this writer into that euphoric, engaged state of mind: the first two Katamari Damacy games, some of the early Tony Hawk titles, and de Blob. While I’ve felt different levels of engagement playing other games, these titles have provided a prolonged and complete sense of immersion. Once a Wii exclusive, when now THQ’s IPs were sold during bankruptcy proceedings, the game made its way onto now-gen consoles, and PC. Now, with the recent release of the Switch iteration of the game, players can submerge themselves on a full-fledged flow on the go.

de Blob’s sense of immersion stems from a synergistic combination of elements that are masterfully interwoven. While playing the title, there are always multiple activities vying for the player’s attention. Even on the loading screen, players unlock pieces of the game’s narrative. Once the player is dropped into the game’s first cityscape, things open up even more. Players can bounce along streets, instantly splashing paint onto buildings, reviving trees, confronting enemies, or even activating mini-missions. The whole experience seems reverse-engineered around an OCD thought process- there’s always some task to complete. 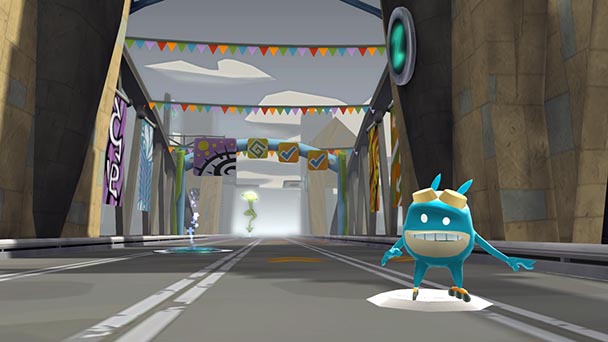 Occasionally, there are multiple levels of reward. Coat an entire block with color and colorless people will pour out of a building. Coloring of them adds to your point total, and if you lacquer the entire lot, a power-up will emerge granting you even more time. Much of the fun stems from being able to paint peripherical parts of the environment. Its never necessary, but you can paint the railings as you roll across a bridge netting additional points for every portion.

Compassionately, it’s also persistently fluid. Unlike Splatoon, where limited ink supplies means it can be an effort to lay down a continuous coat of ink, painting in de Blob is almost effortless. Merely making contact with a structure instantly shrouds the entire building in luminous color. As such, tinting a block recalls the spirited wall grinds of the Tony Hawk series, where the slightest graze can produce a plethora of points. 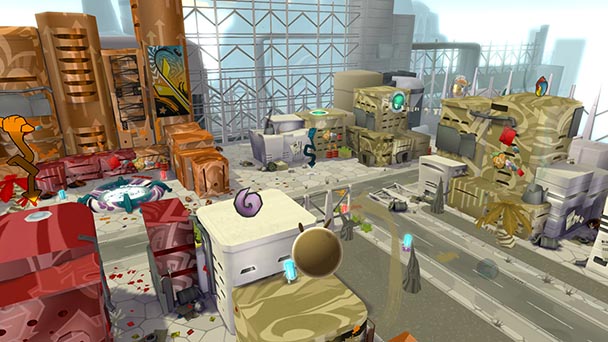 On top of these proceedings is the skillful mixing of sight, sound, and color. As the city grows increasingly vibrant, so does the soundtrack. A simple demanding component could have pulled the gamer out of their immersive interlude. In anticipation of this shortcoming, de Blob wisely errors on the side of ease, rarely allowing frustration to tarnish the proceedings or bring the gamer back to reality. When things do get challenging in the sixth level, the game is proficient enough to confront the escalation of difficultly.  Despite the presence of a timer, the title doesn’t want to punish the player or slow their progress, but wisely maintains them in an unbroken state of captivation.

Those who solely play games for deep storylines may be one of the few groups disappointed by de Blob. The games narrative centers around a group of fascist, monochromic invaders named the INKT, who strip Chroma City of its color and life. It’s up to the player to return happiness and verve to the city’s chromatically deprived environments. While characters are drawn with a nominal complexity, they still display personality and mood. But the bigger issue is that de Blob paints its plotline in such broad strokes, that motivation is mostly driven by unlocking the next stage section. 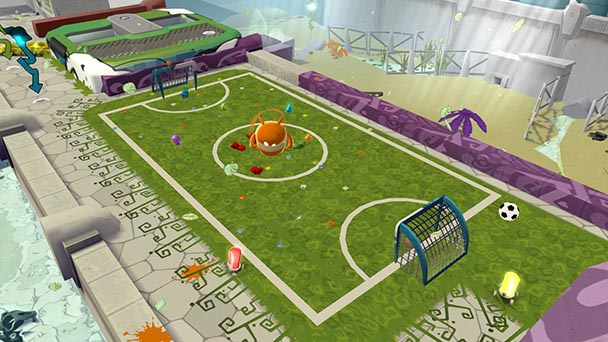 Whereas owners of the original Wii game had to flick their controllers to make de Blob hop, the Switch version unsurprisingly eliminates all motion control. Now, players can move the globular protagonist with the left stick, targeting ink pods or environmental enemies with a trigger pull, and go airborne with a press of the “A” button. Largely, the control scheme is intuitive, except when you have you need to paint taller buildings. To assist with this pursuit, Blob exhibits a magnetic-like attraction when moving around the perimeter, but it’s all too easy to slide off a corner and plummet back to the ground.

Originally released onto the Wii a decade ago, de Blob’s restrained graphical ambitions make a nice fit for the Switch. In execution, that means a port that strives for a thirty-frame-per-second framerate, and habitually meets that target, even when in handheld mode. Sporadically, a bit of pop-in can be spied, but it’s never severe enough to dampen the action. On-screen elements can be a bit diminutive when rendered on the Switch’s 6.2-inch screen, but it’s something you will likely acclimate to, and the issue is nullified when playing in docked mode. Sonically, the game offers an array of different musical styles which all grow in complexity as each stage becomes colorized. 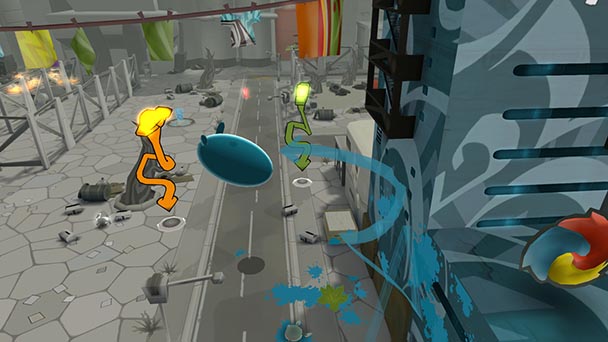 When de Blob was released on the Wii, it was one of my favorite third-party titles, demonstrating a level of quality well above the norm. This Switch port recaptures what made the game so fun, making it a recommended purchase for both fans of the original game as well as those who appreciate a rhythmic, rollicking good time. Hopefully, if the sequel also makes it way to Nintendo’s hybrid, the same level of care will be applied.

de Blob
Platform: Switch, previously on Wii, PlayStation 4, Xbox One, and PC
Developers: Blue Tongue Entertainment, Blitworks
Publisher: THQ Nordiq
Release date: June 26th, 2018
Launch Price: $29.99 via retail or from the Nintendo eShop
de Blob (Switch) review
According to psychologist Mihaly Csikszentmihalyi, &lsquo;flow&rsquo; is the mental state a person reaches when they are fully immersed in a task. Commonly known as being &lsquo;in the zone&rsquo;, Csikszentmihalyi isolated nine elements that occur when people flow, among them a distorted sense of time, clear goals, and a sense of reward. Across the last twenty years, a scant number of games have truly catapulted this writer into that euphoric, engaged state of mind: the first two Katamari Damacy games, some of the early Tony Hawk titles, and de Blob. While I&rsquo;ve felt different levels of engagement playing other games, these&hellip;

Summary : Even if you’re weary of ports, de Blob’s appearance on Switch is something special, offering a commendable adaptation of this third-party Wii classic.