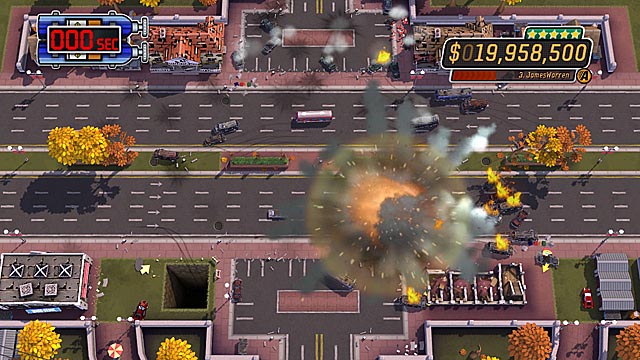 With every new Burnout game, it seems that the racing portion of the game takes a backseat to crashing or forcing someone else to crash in a nifty way. For better or worse, Burnout Crash corrects this problem. The solution? Remove the racing entirely. There is absolutely zero racing in Burnout Crash. What you do get is what I so lovingly refer to as “Burnout 3: Takedown’s Crash Mode on steroids”. The problem with steroids, though, is that the body breaks down quicker. In this case, the body is the game’s lasting appeal.

The goal of Burnout Crash is the same as the Crash Mode of previous Burnout games; rack up as much property damage as you can by causing a massive multi-car pile-up. If you manage to clear one, two, or all three damage value goals or either of the two remaining stage-specific goals, you get a star or stars. Once you collect a certain number of stars, another street (consisting of three stages) on the road map opens up for crashing. Another reason to collect as many stars as possible is to unlock vehicles. Collecting a specified number of stars upgrades your rank and/or unlocks a new car or truck with its own unique power (blast radius of your car’s CrashBreaker explosions) and Aftertouch stats. Aftertouch allows you to maneuver your vehicle in mid-air after using your CrashBreaker. For Crash, the behind-the-car viewpoint of previous Burnout games has been changed to a high, top-down perspective. With this 360-degree field-of-vision, accurately aiming your car’s Aftertouch is easier than ever. CrashBreakers are a mix of risk and reward. While they do send cars flying and enable you to use Aftertouch, they can also scatter lane-closing pile-ups, allowing cars to safely escape. 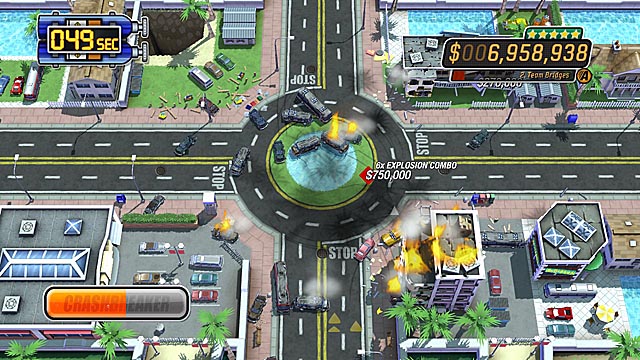 New to Burnout Crash are special events. Filling up a crash meter along the top left of the screen triggers an event that can either be good or bad for you. For example, a good event can be something like a gasoline truck driving through the stage. Crash into it enough or use your CrashBreaker and the thing goes up like a Roman candle, significantly increasing your score for that particular run. The crash meter has three levels to it: a small event, a bigger event, and an end-game event that does massive damage to anything in its way. The strength of this event is determined by the number of X spaces that haven’t been filled. Every time a car escapes unscathed, you get an X. Five X’s means crash over. You can get an X taken off if you allow the ambulance to get through the stage without crashing.

The problem with this format is that crashes lasted excessively longer than they should have. Crash Mode runs went from about forty-five seconds or a minute in other Burnout games to five minutes or more in Burnout Crash. One of the best things about the original Crash Mode was that the quick stage run times lent themselves to “one-more-time” perfectionism. Whereas before, I wouldn’t consider a stage “beaten” until I had a gold star on it, now, I moved on as quickly as possibly. I attribute this to Crash‘s lack of variety. The game has three gameplay modes, but they don’t feel that radically different from each other. The primary mode is “Road Trip”. After completing an intersection in this mode, you unlock two more modes for that intersection; “Rush Hour”, which gives you ninety seconds to cause as much property damage as possible, and “Pile-Up”, a mode that gives you a fixed number of cars to create accidents with. The lack of variety doesn’t stop at the gameplay modes, either. 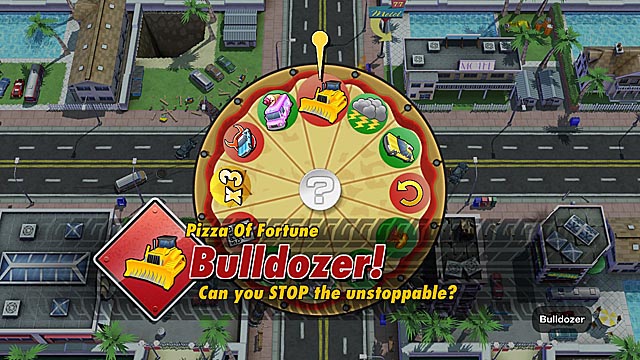 The intersections are, by-and-large, variations or reskins of the standard four-way stop. Even with back alleys and different destructible building placements thrown in, you still feel like you’re stuck playing the same levels over and over again. It doesn’t help that the details of the cars and environments aren’t very easy to make out because of the high overhead camera. The graphics reminded me of the old Micro Machines cars in that the details are so fine that it’s hard to make them out if they aren’t six inches away from your face. I wasn’t expecting Crash to look anywhere near as good as Burnout Paradise, but you would think that Criterion could have at least made the game pop on a 32-inch HDTV.

The audio is a mixed bag, and that’s being generous. Most of the Crash‘s licensed tunes are short clips from popular songs sprinkled into the game. For example, when the “Bad Cops” event is triggered, the chorus of “Bad Boys” by Inner Circle will begin to play. These neat little snippets help give the game some personality and charm. I mean, who wouldn’t chuckle a bit when “It’s Raining Men” starts blasting through the speakers? Unfortunately, the goodwill that the soundtrack builds up is quickly slaughtered by the flat-out awful dialog from the radio personalities. Every stage has several pieces of voice over audio that repeats every time you replay the level. Making this worse is that the announcers are painful to listen to. Ranging from an effeminate redneck to a few-bricks-short-of-a-load 90’s surfer punk, Burnout Crash’s on-air staff will have you scrambling to mute the “announcer audio” volume setting. 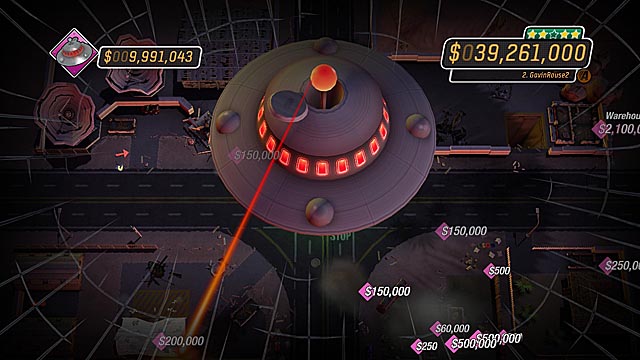 Expanding on the Crash Mode from Burnout 3 was an honorable task. However, this was not the way to do it. Everything I found so addictive about the Crash Mode of Burnout 3 was completely lost in the translation. That’s not to say that the game can’t be entertaining, though. As it is, Burnout Crash is a serviceable time-killer for a rainy day or long weekend. Just don’t expect it to hold your attention. There are some neat ideas here, but I think Criterion needs to go back the the drawing board if Crash sells well enough to spawn a sequel. Burnout Crash is $10/800MSP and takes up just over a gig.