Atelier Shallie Plus: Alchemists of the Dusk Sea review 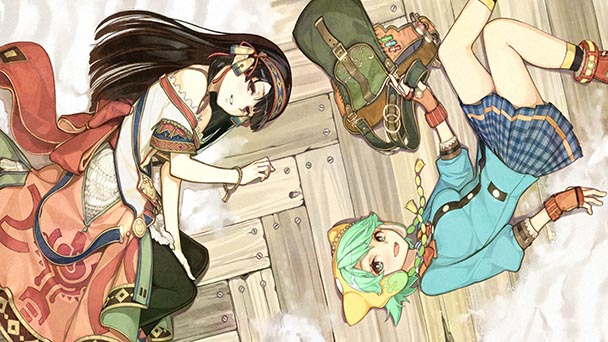 Quite often, Western dystopia is rendered in a very distinct manner. Outdoor settings are often sun-beached and desiccated, dotted with the rotting remnants of a once-industrious society. Whether the context is Borderlands, Homefront, or the Fallout series, the aesthetic exhibits an environment with little hope of recovery, while plotlines task the protagonist with survival against this ubiquitously oppressive wasteland.

But in Japan, a country that’s endured, rallied, and rebound from several harrowing hardships, the notion of gamburu is pervasive. Detonating a tenacious work ethic through arduous times, the term also signifies the tacit sacrifice of an individual in order to improve the communal.  It’s also a concept that’s at the heart of Gust’s Atelier Shallie Plus: Alchemists of the Dusk Sea, contributing a poignant sentiment to a game that comprised of a number of engaging play mechanics. Originally, a PlayStation 3 exclusive, developer Gust was compiled all of the DLC and made a number of exposition-based changes, resulting in a treat for adamant alchemists. 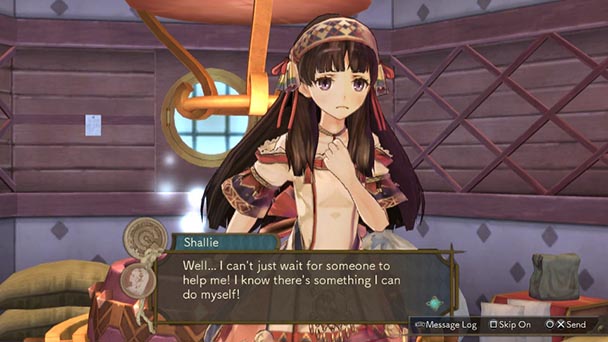 Set six years after the events of Atelier Escha & Logy: Alchemists of the Dusk Sky, the title depicts a world on the precipice of ruin. A drought has reached perilous levels, and while most humans have escaped nature’s wrath, the disappearance of flora and fauna indicates a severe threat to human life. Two lead characters, both nicknamed Shallie, represents the realm’s harbingers of hope.

Shallistera is the heiress of a ship-building family, hailing from a village that’s been ravaged by the drought. Her pedigree and reserved demeanor signify a bit of introversion- but much like the Atelier series previous protagonists she shrouds her shyness to help her township, demonstrating a quintessential embodiment of gamburu. In execution, it’s hard not to be moved by Shallistera’s selflessness, especially when so many other characters agree to assist on the condition of reciprocity. Shallotte, the game’s other Shallie, is the consummate dreamer. While forced into performing odd jobs around the city to help support her widowed mother, she longs for a life centered around the alchemical caldron. Unlike Shallistera, Shallotte is a bit more of an extravert, as evidenced by the occasional cheeky remark and an attire that looks suspiciously Shibuya-esque. 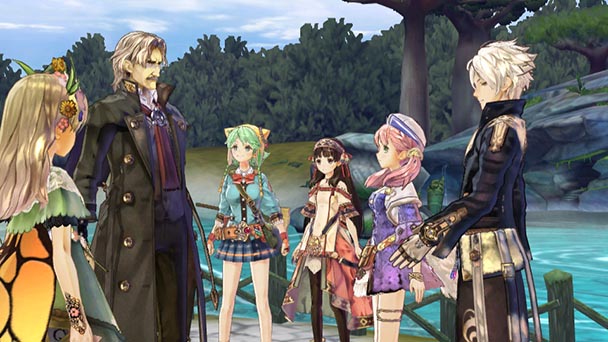 Given the shared name, it’s little wonder than the both Shallies share a common fate. Following a prologue which introduces both characters, Alchemists of the Dusk Sea allows gamers to decide who will be the lead. While there’s enough substance to justify a second playthrough, there’s also a bit of recycling, with Stera and Lotte sharing scenes across their respective playthroughs. But for longtime Atelier fans, this isn’t the game’s biggest transgression; more concerning is Dusk Sea’s decision to keeping things perpetually light-hearted. While a sumptuous opening cinematic hints at a narrative impetus that’s rooted in the melancholic, the opportunity is never realized, softening the impact of each Shallies’ trek toward self-actualization. Likewise, plot points from previous Dusk entries go unresolved, while the game’s eponymous pestilence receives little in the way of explanation. On the upside, Alchemists of the Dusk Sea improves on the series’ rendering of secondaries, offering a number of subordinate characters worth caring about.

Undoubtedly, Dusk Sea’s decision to desert the customary time-management mechanics might be a cause of contention for Atelier vets.  Traditionally, the series has cultivated tension through the application of deadlines; although the rigidness has been tempered in more recent entries. Alchemists of the Dusk Sea’s Life Tasks system eschews the calendars and rigid time constraints, increasing the level of autonomy into Stera and Lotte’s journey. Now, each Shallie’s motivations can be scrutinized with a press of the select button, bring up visual representation of the character’s mind. Sure, there are requisite plot points and tasks that need to be fulfilled to ensure each heroine is at the proper experience level. But beyond these mandatory missions, players are free to chase their own pursuits, whether their passion is crafting, item collection, monster purging, or physical improvement by bounding across the battlefield. With the change, the apprehension associated with deadlines is gone, making Alchemists of the Dusk Sea’s trek significantly more relaxing. Conversely, a sense of urgency and representation of the irreplaceability of time has gone missing. 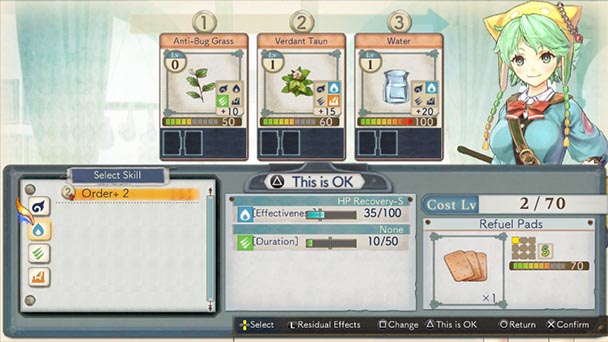 Each completed Life Task rewards players with experience, which is the most efficient route toward improving your character. While combat typically pays minor EXP dividends, accomplishing your personal goals can raise Shallie up several experience levels. Fortunately, both Stera and Lotte are offered plenty of life tasks, as a seemingly endless need for synthesized equipment, healing items, and explosives exists. Following franchise custom, the ingredients for these alchemical recipes are found around austere areas outside of towns.

Whereas synthesis in many JRPGs largely concludes with the accumulation of all key components, with Atelier games are a bit more involved. Players determine the quality of the product by the components that put into it, with ingredient traits elevating the effectiveness or retail value of your final product. Unsurprisingly, there’s a built-in system to prevent player exploitation, with Shallie’s ever-expanding alchemical skill level as well as the quality of ingredients restraining the integrity of the final product.

What are the differences with the Plus version?
The most obvious change to Atelier Shallie Plus is the inclusion of all of the paid, downloadable content that was made available for PlayStation 3 owners. Sure, the new costumes don’t affect gameplay in any way, but they do validate Hidari’s skill with character design. While the game’s default music is charmingly melodic and save for its brevity, might be difficult to surpass. But that said, the ability to switch soundtrack to past Atelier titles is an indulging perk for dedicated alchemists.

Narratively, the Plus version aspires to remove some of the ambiguity surrounding the game’s plight. While those who appreciate the allegorical aspects of Japanese-born games might not appreciate the clarification, those invested in the Dusk series will probably welcome the changes. Less contentious is the inclusion of Ayesha and Logy, making Shallie Plus the only game that unites all of the Dusk protagonists, extending just enough new story to justify a replay by Shallie veterans.

Traditionally, Gust’s PS Vita ports have struggled to duplicate the output of their home-based brethren. And with Atelier Shallie, that practice endures. Although Sony’s portable admirably captures the locations, characters, and costumes of the PlayStation 3 iteration, frame rates falter in the process. As a turn-based role-playing game, the blemish is wholly cosmetic and a sacrifice for being able to enjoy Shallie on the subway, bus, or at school. On the upside, DLC characters have had a habit of disappearing in cutscenes, but with Alchemists of the Dusk Sea that distracting lapse has finally been fixed.

Areas abounding with natural resources are also teeming with antagonism, prompting Shallie to do battle with a menagerie of menacing (but mostly cute) creatures. Much like the Life Task component, changes seems to be designed to attract newcomers into Atelier’s fold, with a simplified interpretation of conflict. Pleasingly, the game’s turn-based encounters feel brisk, with players directing their party of three characters (with another trio on reserve) toward different types of attacks, all while monitoring the turn order. Nuance comes in the form of Bursts, which give an indulging number of perks to party members, as well as the ability to switch characters- a capability which is conferred after several hours of play.

In battle, players have the option to use the right stick to rotate the camera, a capability that’s rather useful given Dusk Sea’s larger areas of exploration.  A while the game still exhibits the occasional framerate stutter during play, the title’s visual design is immaculate. Output closely resembles the ambition of concept art, with character design highlighted with a fastidious attention to clothing and facial expressions, offering a cast rendered in sunny hues and a hint of cell-shading. Backdrop are equally as adept, offering scenic panoramas dotted with bits of animation. Socially, the game’s soundtrack is proficient, delivering everything from plaintive piano-based melodies to stirring harmonies. As high-quality as the score is, there needs to be more of it; Dusk Sea’s melodies have the tendency to loop with each scene transition. 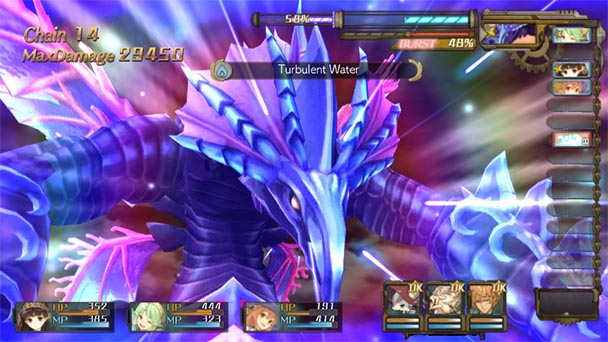 Mirroring the series’ interpretation of item synthesis, Atelier Shallie Plus: Alchemists of the Dusk Sea offers a rewarding amalgam of elements, mingling the mechanics of alchemy, character development, and battling together into a synergistic and satisfying blend. While components have been streamlined and softened in a bid to attract newcomers, Dusk Sea’s design decisions are largely beneficial- removing the anxiety that can accompany an Atelier title.

Atelier Shallie Plus: Alchemists of the Dusk Sea was played on the PS Vita with review code provided by the publisher.

Atelier Shallie Plus: Alchemists of the Dusk Sea
Platform: PS Vita
Developer: Gust
Publisher: Koei Tecmo
Release date: January 17th, 2017
Price: $39.99 via PSN
ESRB: Everyone 10+
Atelier Shallie Plus: Alchemists of the Dusk Sea review
Quite often, Western dystopia is rendered in a very distinct manner. Outdoor settings are often sun-beached and desiccated, dotted with the rotting remnants of a once-industrious society. Whether the context is Borderlands, Homefront, or the Fallout series, the aesthetic exhibits an environment with little hope of recovery, while plotlines task the protagonist with survival against this ubiquitously oppressive wasteland. But in Japan, a country that&rsquo;s endured, rallied, and rebound from several harrowing hardships, the notion of gamburu is pervasive. Detonating a tenacious work ethic through arduous times, the term also signifies the tacit sacrifice of an individual in order to&hellip;

Summary : Atelier Shallie Plus: Alchemists of the Dusk Sea’s Shallistera and Shallotte deserve attention. Not only are they strong, female leads who resist over-sexualization, but the duos’ selfless journeys are inspirational, revealing a sense of optimism that endearing without being ingenuous.