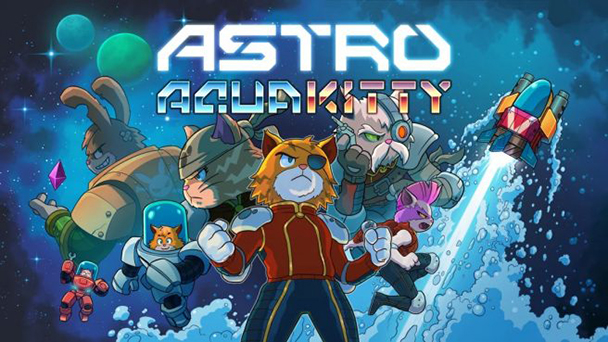 Originally released on the PS Mobile Store, 2012’s Aqua Kitty: Milk Mine Defender was one of the true highlights of Sony’s now-defunct digital marketplace. A brilliant reworking of William’s 1981 arcade hit Defender, players dove into waters teeming with malicious marine life, while trying to safeguard their milk supplies. Smartly, the title wasn’t just a simple clone. From a map of branching missions to a secondary weapon system that rewarded prudent use, Milk Mine Defender demonstrated developer Tikipod ingeniously building on the original game’s time-tested foundations.

With the release of Astro Aqua Kitty, Tikipod takes Milk Mine Defender’s basic framework and adds layers of tautly balanced systems. Much like how Castlevania: Symphony of the Night constructed a sophisticated adventure around the original NES game, Astro Aqua Kitty thrusts the property is stimulating new directions. The result isn’t far from the success of Toru Hagihara and Koji Igarashi’s masterpiece. 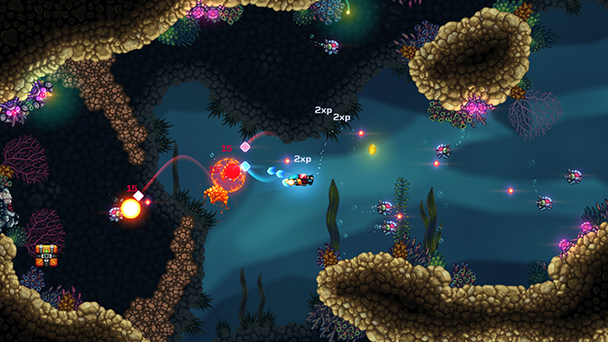 Echoing a number of interesting risk/reward mechanics, you’ll begin your expedition by selecting a pilot and engineer. The former offers a quartet of felines, who each have a signature style, from the tanky heavy-hitter to the nimble Scout, each kitty has their own set of skills. Similarly, you’ll have a roster of four non-feline engineers to select from who specialize in abilities like ship repair, defensive traits, or maintaining an ample supply of energy.

What’s surprising is how distinctive each choice feels. A playthrough with the resident Heavy prodded a play style quite different than the Chaos cat. One thing I would have liked to see if naming for each character. Monikers like ‘Fighter’ and ‘Defense’ don’t really ignite imaginations. If you’re a sadist, there’s a permadeath option, but most mortal will want to tackle the game’s ‘normal’ option. Additionally, there are five difficulty levels for an experience that ranges from tranquil to unapologetically hectic. 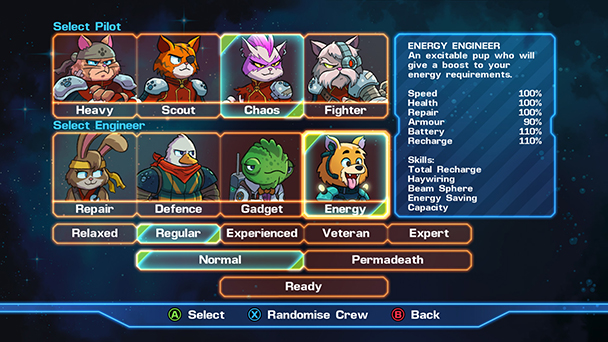 Dangers of the Deep

Astro Aqua Kitty’s campaign is spread across a field of eight asteroids, with each offering its own map, filled with labyrinthine networks. For better or worse, the emphasis is on action rather than exposition. Sure, there are a myriad of colonist-kitties about, many issuing fetch quests for materials like pollen and sawfish cores. While some my fault the game’s skeletal storytelling, the succinct text boxes spoken by each NPCat helps to keep the pace persistently lively.

Building on Milk Mine Defender, the moment to moment conflict is one area where Astro Aqua Kitty shines. There’s a multitude of different enemy types, who all seem to replicate organic aquatic behaviors. Crabs linger in craggy recesses, making targeting just a bit challenging. Other enemies dart around in schools while other adversaries prefer solitude. But these aren’t ordinary sea creatures. Some are armed with fast-moving projectiles, while other foes emit toxic ammos that explode in poisonous blasts or drop a field of mines to protect themselves. The action is at its best when you move into busy spaces, prioritizing targets to take control of the area. 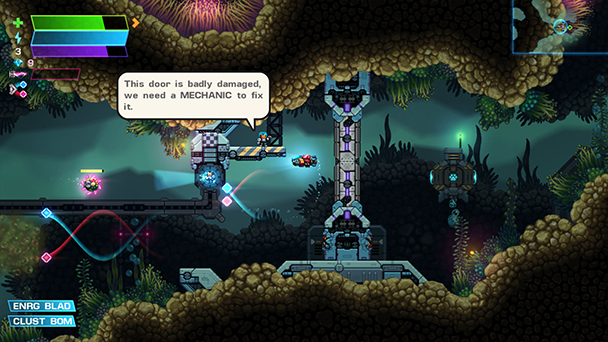 Damn the Torpedoes (and Searing Lasers, too)

Pleasingly, provides a wealth of tools to take on adversaries. With the ability to carrying two weapons, there’s a gratifying sense of variety. While you can opt for low-energy guns like a single, forward-firing shot, there are also devastating beams that can scorch enemies, but you’ll have to watch your power levels. From homing torpedoes, mines, and bullets than change your trajectory, there’s a lot of enjoyment in testing each newfound or purchased firearm and finding loadout that suits your playstyle. Even if you’re the type of person who prefers to stick with a trusted gun, Astro Aqua Kitty tosses a lot of temptation your way. Weapons have level requirements, and you won’t want to be stuck with a lowly peashooter when you have a level five cannon in your inventory.

Given your ship’s limited inventory, you’ll have to juggle a diverse offensive arsenal with a supply of defensive measures. Much like the multitude of weapons, Aqua Kitty also offers a plethora of chip upgrades. These perks are largely passive doing things like upgrading your shielding, quickening your energy or regenerative shielding, or just making your little sub faster. When coupled with ship upgrades when your ship level up, there’s a lot of sub tweaking that can be done. 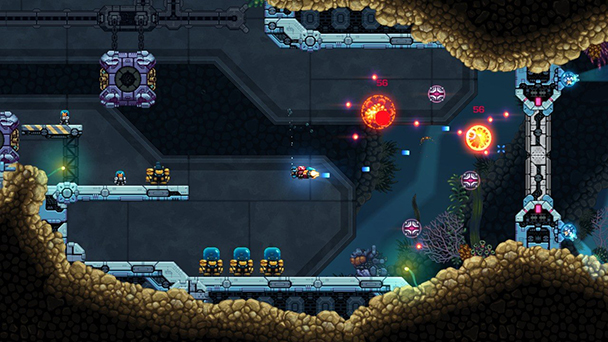 Yet, a multitude of systems can result in a quagmire if there no balancing. And it’s here that Astro Aqua Kitty shines. You’ll feel a sense of progression when eliminating masses of enemies from areas. But smartly, subordinates gently respawn, ensuring the bits of backtracking aren’t dull affairs. The difference in difficulty between standard encounters and boss battles can often be a sticking point for Metroidvania-type games, with the former serving as level up fodder. But here, there’s an astute equilibrium. You can find yourself in precarious fights with basic foes while the game’s showdowns are tense but never feel frustrating. Sure, boss patterns are easily read, but the enjoyment stems from ranking which threat is most deserving of your weaponry at any given moment.

Likewise, the loot drops don’t burden you with sorting through piles of impractical junk. When you do earn an item drop or blast open one of the chests that are hidden in sea-alcoves, you’ll receive some practical goods. Sure, not every every drop will be to your liking, but Astro Aqua Kitty doesn’t squander your time with pointless dividends. Even if the new weapon didn’t harmonize with my play style, giving the gun a trial often demonstrated advantage over a certain type of enemy. There are an assortment of triple-A loot shooters that don’t pull this off as well, making Tikipod’s achievement noteworthy. 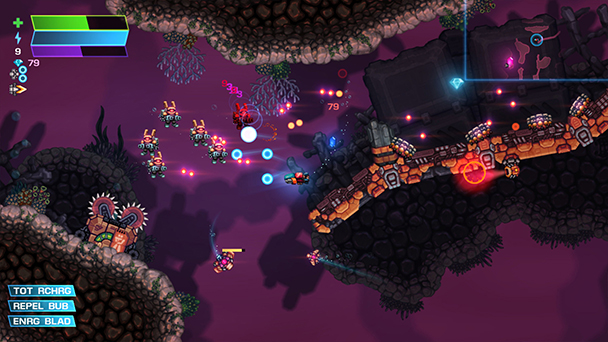 Visually, Astro Aqua Kitty delights with the kind of endearing two-dimensional visuals the developer is known for. Small details like your sub’s tiny propeller and a trail of bubbles demonstrate a fastidious attention to detail. Meanwhile environments gradually add new elements and enemies like radiant pollen grottos, erupting lava geysers, and enemies who erupt from tell-tale hollows. The best trait is that is all runs at a fluid sixty frames-per-second in docked mode. There’s no slowdown or judder to fracture the sense of immersion. Mark Day and Cody Carpenter’s soundtrack is just as marvelous, weaving it a bit of classic chiptune instrumentalization with synths that vary from bubbly arpeggios to silky smooth washes. There aren’t a ton of tracks, but each one is memorable.

Let’s face it, the Metroidvania is getting a bit stale. Astro Aqua Kitty employs the basic elements, merging exploration, action, and light role-playing traits. But conflicts occur in free-scrolling shootouts rather than across platforms. Underneath it all, there’s a fulfilling sense of autonomy and the game is reluctant to lock players onto a specific weapon for a given task. As such, the moment-to-moment play is almost always compelling, making for one of better indie experiences found on Switch.

Astro Aqua Kitty was played on Switch with
review code provided by the publisher.

Astro Aqua Kitty review
Originally released on the PS Mobile Store, 2012&rsquo;s Aqua Kitty: Milk Mine Defender was one of the true highlights of Sony&rsquo;s now-defunct digital marketplace. A brilliant reworking of William&rsquo;s 1981 arcade hit Defender, players dove into waters teeming with malicious marine life, while trying to safeguard their milk supplies. Smartly, the title wasn&rsquo;t just a simple clone. From a map of branching missions to a secondary weapon system that rewarded prudent&hellip;

Summary : Astro Aqua Kitty is the irrefutable cat’s meow, offering a sizzling mix of retro action, adventure, and RPG elements. Anyone with the slightest fondness for 2D action, will want to enlist for this enchanting expedition.