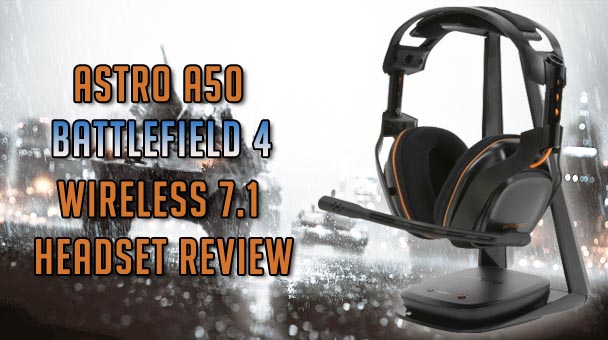 The general rule when you see you branded hardware is to run as fast as you can in the opposite direction. Too often, name recognition is used to push second-rate peripherals. I should know, I’ve owned a Black Ops controller, an Atari headset, and a Halo 4-themed console that have given up the ghost long before the warrantee period has expired.  However, when a licensed product comes from a manufacturer as prestigious as Astro, build quality isn’t expected to be compromised.

Gladly, that’s not the case with the Astro A50 Battlefield 4 Wireless Headset. Built using the same superior specifications as the company’s standard A50s, the peripheral makes a few small modifications. Obviously, there’s the aesthetic difference: the sides of the retail box divulge an affiliation with Electronic Art’s latest military shooter. Owners will find the name of the game tastefully written on the speaker tags and a conversion to orange detailing across the headset- but other that these diminutive differences, this is largely the same sizeable headset that has garnered considerable critical acclaim. Functionally, there’s one interesting distinction: the peripheral has an EQ setting which was developed in conjunction with Battlefield developer DICE purportedly delivering a first-class sound mix. 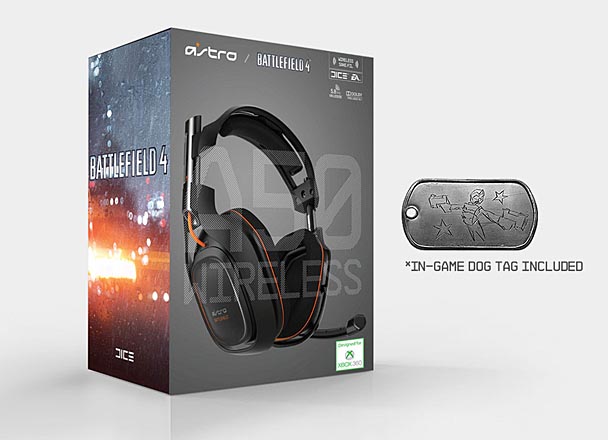 Unboxing and Setup Made Easy

Astro’s packaging does an excellent job of not only keeping the A50’s safe from ham-fisted delivery people, but also giving owners quick access to their new purchase. Once the surrounding cardboard sheath is removed, an interior box opens to reveal the headset secured in an easy to open polystyrene clamshell container. Inside, owners will also find a fold-open quick start guide, the A50’s Mixamp, all the cables necessary to connect to a console, a basic stand, as well as code to download an Astro dog tag in the Xbox 360 version of Battlefield 4.

Since the A50s come shipped already paired to the Mixamp, hooking the headset up to a console, PC, or other sound source is a breeze. Simply plug one end of the supplied TOSLINK cable into the optical out port of a device (removing the protective black caps, of course) and plug the other end into the amp. Nicely, the A50’s don’t require a connection to an AC outlet, instead drawing power from any USB port. For the PS3 or PS4, owners will want to adjust the sound setting to digital output. For the Xbox 360, there is one additional link- requiring a cable between the controller and the headset for voice chat to function. While we weren’t able to verify the process on the Xbox One, connecting the A50s to the Xbox 360, PC, PlayStation 3 and 4 was an effortless experience. With the inclusion of a 3.5mm jack on the back of the Mixamp, we were also able to use the Astros with a tablet, phone, and portable game system- although Dolby Surround Sound was, of course, absent. 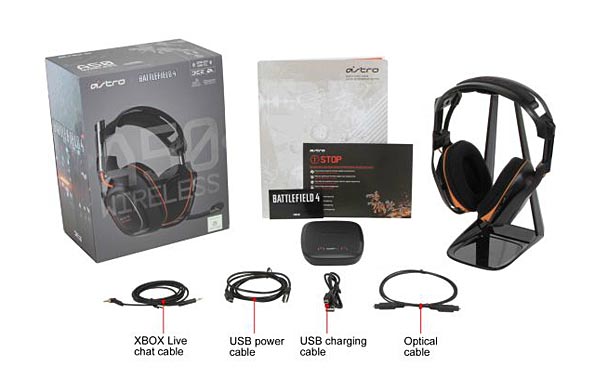 For analysis, we used the A50s to play four games: Grid 2, Killzone: Shadow Fall, Disgaea D2: A Brighter Darkness, and naturally, Battlefield 4, as well as watched a few Blu-rays. While playing Codemasters racing title, the headset performed admirably, capturing the throaty growl of the Dodge Charger RT or the meticulously tuned operation of a Mercedes Benz SLR 722. The intimacy of the A50s 40mm drivers allowed players to bear subtle sonic details that were usually buried in the mix, such as tire traction on various types of surfaces or the whizz of enemy bullets passing by our heads. For A Brighter Darkness, the Astros offered a capable recreation of the game’s dialog and whimsical music pieces, exhibiting a nice aural range. Unsurprisingly, the A50s exceled with first person shooters. With the Mixamp’s Dolby Digital button engaged and glowing, the headset delivered a pleasing sense of fidelity- articulating directional sound with enough clarity that we could disclose the position of firing or walking enemies, as well as the location of our off-screen comrades. Using the headset to listen to a Blu-ray proved just as adept; Gladiator performed glowing – the cacophony of combat engaged our ears, while Hans Zimmer and Lisa Gerrard’s stirring score provided a virtuous counterpoint. Most of the time, we left the A50s EQ on their default Media Mode setting; Core Mode boosted the low end enough to makes the bass overwhelming. The setting for Battlefield 4 was unsurprisingly adept during FPSs, adding clarity to dialog and contributing to the punch of explosions.

Altogether we were able to squeeze about 12 hours of performance out of the A50 following a three hour charge to capacity. Agreeably, gamers can charge the headset during play, so they’ll rarely be out the action. The sole downside is that Astro has locked away the lithium-ion battery, so when the power source eventually expires, owners will have to ship their headsets directly to the manufacturer for repair. 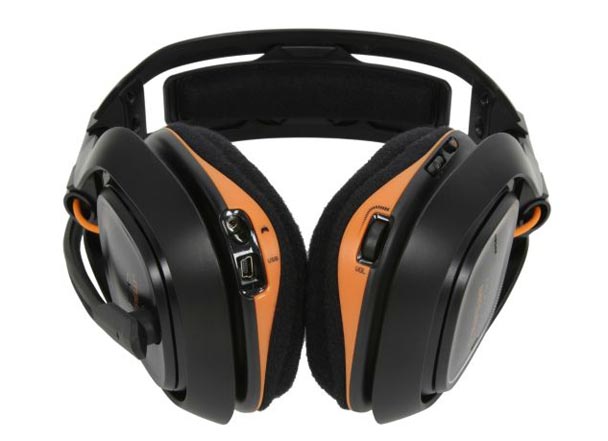 Pleasingly, the A50’s use of the 5.8 GHz section of the spectrum permitting performance without neither acoustic hum nor any inference- even in an area inundated with wireless devices. The headset’s range is a bit shorter than its competitors- we took the unit about twenty feet before drop off occurred. That said, that’s probably more than enough distance for most gamers. Ergonomically, the headset is well designed, with stitches and dials that are all easily accessible. Our only complaint is that the volume switch lacks any type of memory- instead the A50 resets to a standard listening level each time it’s turned on.

There’s no doubt the Astros are a bulky headset, easily rivaling the size and weight of a pair of F.R.E.Q. 7s. Yet, where Mad Catz device is built around a sturdy medal frame, the A50’s are constructed with plastic. While the headset’s structure seemed secure, we worry about the polystyrene cracking from a high fall. Although the A50s are rather bulky, the peripheral didn’t induce fatigue during protracted play sessions. Smartly, cushy fabric piece at the top of the headset’s frame seems to help offset the weight of the device. Just as comforting are the A50’s foams pads which fully cover the ears. Although there is a bit of shielding from outside noise, ambient sound is still noticeable. 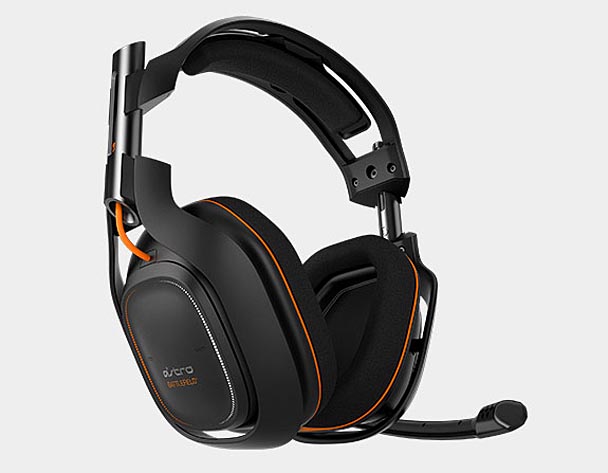 One of the A50’s most unremarkable attributes was the exceptional quality of voice chat. Using an additional microphone to detect background sounds, noise canceling was especially effective. It was apple to mollify our lab-created klaxon quite well, allowing just the intended vocal chat to be shared. Following other brands, the A50’s forgo a dedicated mute button, allowing chat to be hushed by lifting the microphone boom.

As a $300 (although plain A50s can be found for as little as $230 online) consumer-level headset, the Astro A50s are one of the most expensive headsets on the market. However, the steep MSRP does come with a few perks. Hands-down, the sound quality of the Astro A50 Battlefield 4 Wireless 7.1 Headset trumped its competitors, offering not only a rich spectral range but also Surround Sound that adept enough to pin point the direction of sound sources. For those who obsess about having the ultimate gaming set-up, Astro’s A50s should be a top consideration when choosing a Dolby Pro Logic IIx- enhanced headset. 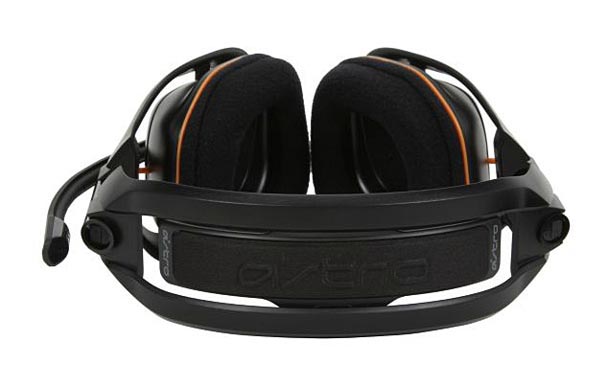 An Astro A50 Battlefield 4 Wireless 7.1 Headset was provided by the manufacturer for review purposes.

Astro A50 Battlefield 4 Wireless 7.1 Headset Review
The general rule when you see you branded hardware is to run as fast as you can in the opposite direction. Too often, name recognition is used to push second-rate peripherals. I should know, I&rsquo;ve owned a Black Ops controller, an Atari headset, and a Halo 4-themed console that have given up the ghost long before the warrantee period has expired.&nbsp; However, when a licensed product comes from a manufacturer as prestigious as Astro, build quality isn&rsquo;t expected to be compromised. Gladly, that&rsquo;s not the case with the Astro A50 Battlefield 4 Wireless Headset. Built using the same superior specifications&hellip;

Summary : While the Astro A50’s are a bit pricier their competitors, those seeking a superlative sonic experience will want to ante up the extra dollars.