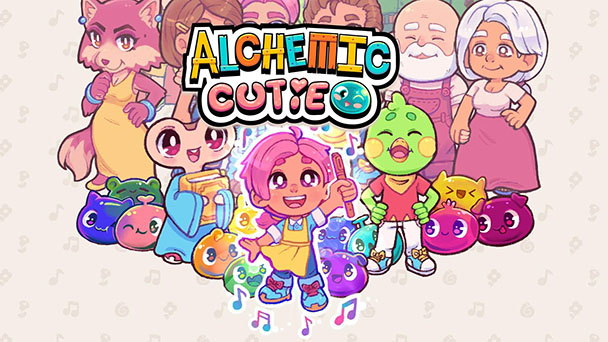 Veering from most farming sims, Alchemical Cutie has you nurturing jellies rather than fruits and flowers. While the concept of a farm full of Dragon Quest-esque creatures is alluring, the game’s too relaxed and directionless for its own good. 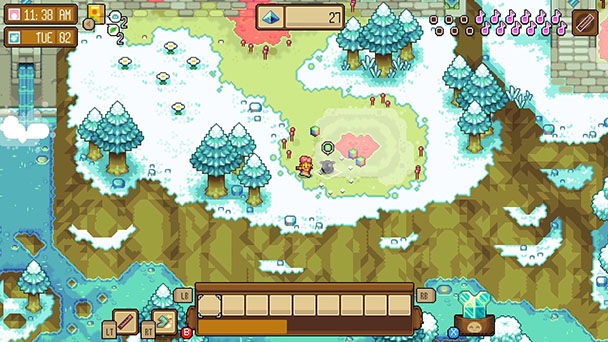 A multitude of games have demonstrated the joys of simulated farming. Titles such as Harvest Moon/Story of Seasons, Stardew Valley, Animal Crossing, to My Time at Portia showed that the cultivation of digital crops can be a relaxing and fulfilling alternative to games that overwhelm you with non-stop action. At first glance, developers Vakio and Viridian Software Alchemical Cutie seem to channel that same kind of tranquil vibe.

Venture to Wimba Island and you’ll the find the pastoral, pixelated environment you might expect from the genre. Like most of its peers, Alchemical Cutie centers around one of those perpetually upbeat protagonists, eager to find meaning in rural life. Situated among pixel-art structures are footpaths, forests, and waterfalls that subtly shift in appearance across seasons. Expectedly, there are also the genre’s requisite NPCs, who offer bits of small talk and the occasional encouragement. But don’t look for them to provide much in the way of relationships. They’ll offer some basic advice and engage in transactions, but character arcs aren’t found on this isolated landmass. 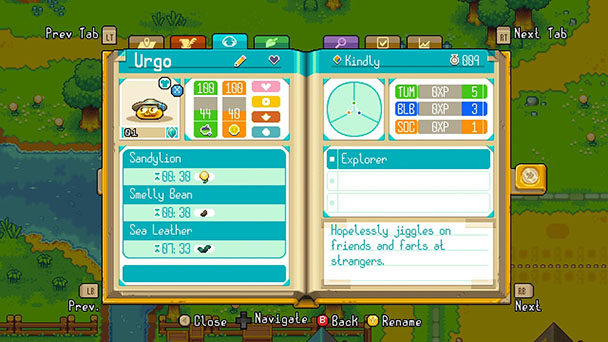 You’re On Your Own

Perplexingly, Alchemical Cutie’s brief tutorial only communicates the fundamentals of island life. Almost everything else, you’ll have to discover on your own. When coupled with a lack of direction, life on Wimba Island can seem like a rather bewildering experience.

The genre’s best efforts inundate players with possible tasks and you’ll try to complete as much as you can each workday, as you work toward long term ambitions. But the typical endgoals, like procuring time-saving technologies or obtaining the affection of a spouse are oddly absent here. Instead, you’ll gain wealth for the sake of being rich. But it all feels empty. Maybe the developers are telling us something.

While you’ll collect natural resources like plants and shells, your main ambition is to fill you farm with jellies, who resemble Dragon’s Quest’s iconic slimes. This is a rather easy task and playing your flute within earshot of a wild jelly automatically hoists it back to your ranch. From there, you’ll treat them like a Tamagotchi, feeding it, petting it, and cleaning up the occasional poop it leaves behind. But unlike Bandai’s pocket toys, cuties can fall in love and breed. When they parish, they can leave behind currency, or when properly cared, relics. These are used to open up different parts of the island and advance the skeletal storyline. But again, Alchemical Cutie doesn’t tell you these things. 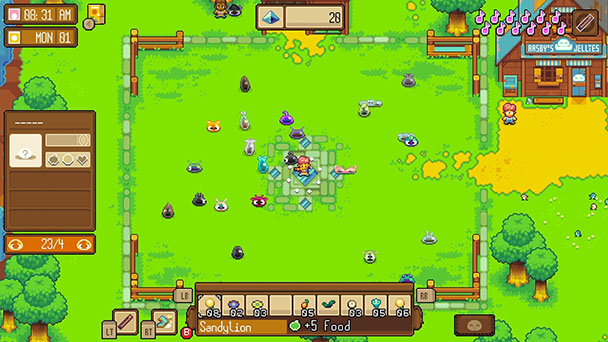 However, the lack of guidance is balanced by the perennial nature of Wimba Island. Wait a few in-game days, and flora will regrow and new jellies will materialize. And even if you don’t want to wait for a particular flower to sprout again, you can use your flute to instantly alchemize another one. You’ll learn to love your magical instrument, as it can even turn grass into currency. Guiding your day-to-day life are periodic requests for different types of materials to resell, encouraging you to collect 30 specific flower types or even pieces of poop. There are also the requite errands with mail delivery and searching for items to fill your destitute days.

Beyond the game’s empty-feeling economy, there’s a lot of Alchemical Cutie that feels convoluted. Sure, you can customize your jellies with found objects and you’ll need to nurture certain qualities. But too often, nuances are buried deep in the in-game codex. Basic things like feeding and improving the contentment of jellies should be intuitive. But unlike a Tamagotchi, the game doesn’t provide unambiguous indicators of basic needs.  Credit should be given to Dale North’s delightful score, which channels the charm of Joe Hisaishi. 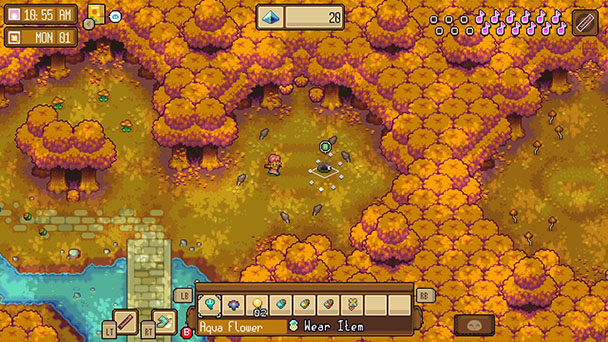 Alchemical Cutie feels like a glossy, luxurious looking new board game that didn’t ship with instructions. The relaxed vibe and vibrantly colored pixel art are certainly inviting, but you’ll soon struggle with identifying tasks, goals, and motivations. Even if you adore these kinds of tranquil titles, you’ll want to approach Alchemical Cutie with either caution or a detailed FAQ.

Alchemical Cutie was played on PC with review code provided by the publisher.

Alchemical Cutie mini-review
Veering from most farming sims, Alchemical Cutie has you nurturing jellies rather than fruits and flowers. While the concept of a farm full of Dragon Quest-esque creatures is alluring, the game&rsquo;s too relaxed and directionless for its own good. A multitude of games have demonstrated the joys of simulated farming. Titles such as Harvest Moon/Story of Seasons, Stardew Valley, Animal Crossing, to My Time at Portia showed that&hellip;

Summary : The concept of running your own slime farm might be tempting, but Alchemical Cutie provides far too much autonomy and not enough incentive.